Both sides of the “Christian America” debate employ the same strategy: posit a world in which everyone is either a Christian or a deist, show the American founders weren’t in your opponent’s camp, and then claim, as a result, that they must’ve been in yours. If you’re promulgating the Christian America notion, interpret everything they said and did according to the assumption they were Christians, and subsequently anoint the institutions they established as “Christian.” In his new book, Did America Have a Christian Founding? Separating Modern Myth from Historical Truth, Mark Hall—professor of politics at George Fox University in Newberg, Oregon—disappointingly provides yet another example of this methodology.

Hall mischaracterizes my concept of theistic rationalism as “a definition of deism” (15), even though it was expressly designed to describe a belief system opposed to deism. In the pages that follow, the reason for this mischaracterization becomes clear. Like so many others, Hall’s argument depends on the false dichotomy outlined above. If there exists another option—such as theistic rationalism or even mere unbelief—then one must provide positive evidence for the claim that key founders were Christians, not just repeatedly point out the lack of evidence that they were deists.

On multiple occasions, Hall asks for clear evidence that key founders rejected Christianity, but he does not feel compelled to provide any clear evidence that they affirmed the fundamentals of Christianity. Is the burden of proof on the one making the claim or on others to disprove it? Particularly troubling is the fact that even when smoking-gun evidence is presented that a founder was not a Christian—John Adams on page 7—Adams is still used as an exemplar in other sections of the book to bolster claims of Christian influence (11, 32, 102, 111–13, 131).

The argument proceeds thusly: (1) the founders weren’t deists; (2) the Constitution is not “godless”; and (3) the courts have gotten First Amendment and religious liberty issues wrong. Yet there is no “here is evidence that the founders believed the fundamental doctrines of Christianity” chapter—not even for the founders who actually were Christians. 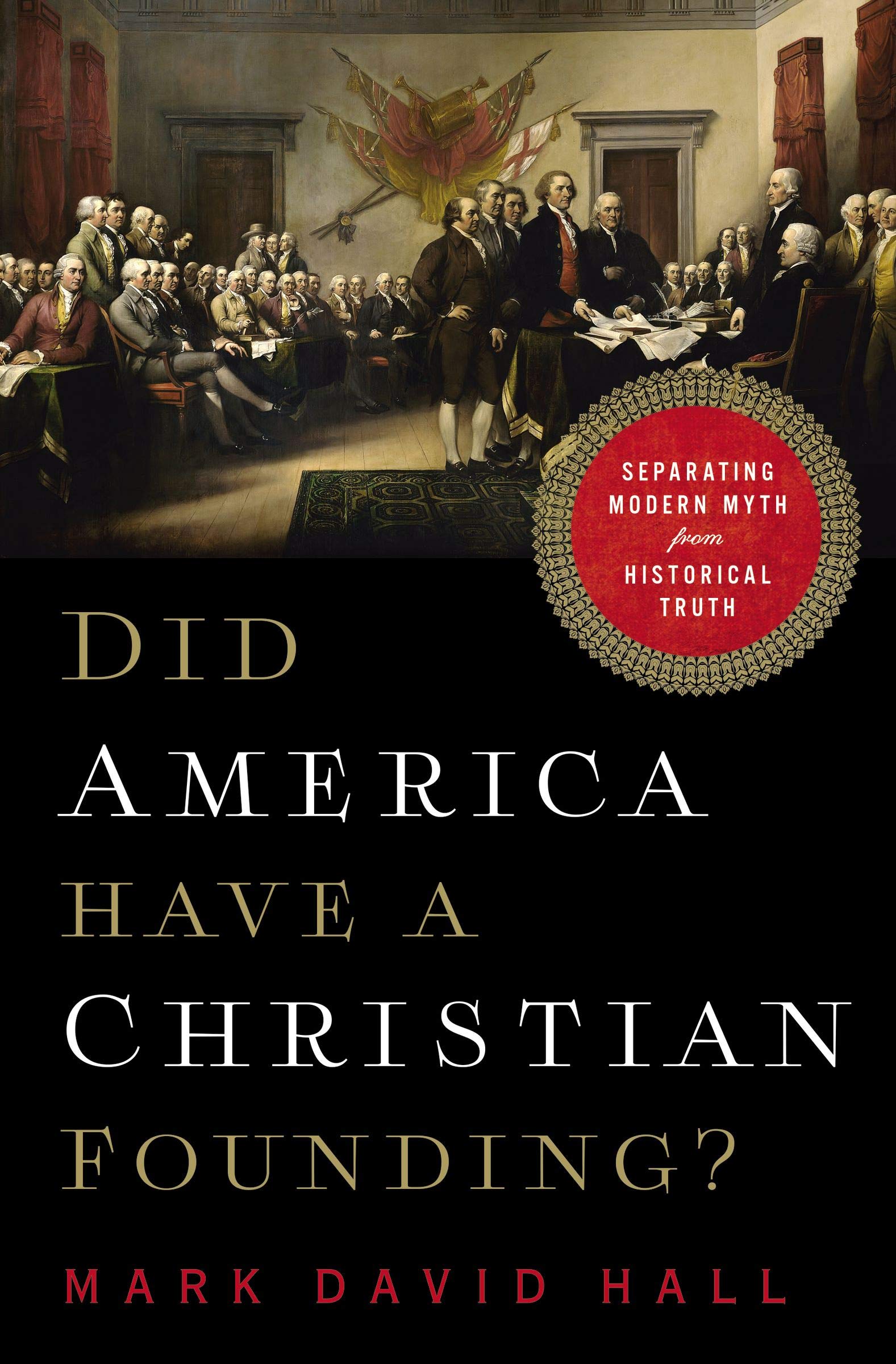 Did America Have a Christian Founding? Separating Modern Myth from Historical Truth

Did America Have a Christian Founding? Separating Modern Myth from Historical Truth

Many Americans have been taught a distorted, inaccurate account of our nation’s founding, one that claims that the founders were deists who desired the strict separation of church and state and that the country’s founding political ideas developed without reference to Christianity. In this revelatory, rigorously argued new book, Mark David Hall thoroughly debunks that modern myth and shows instead that the founders’ political ideas were profoundly influenced by their Christian convictions.

Did America Have a Christian Founding? raises a number of important questions. What is the meaning and appropriate use of the term “Christian” as it relates to individuals and to institutions? Hall proclaims individuals to be Christians if one can’t find clear evidence they expressly rejected Christianity or if they were affiliated, however loosely, with some Christian denomination. Since he emphasizes denominational affiliation and suggests someone might be a “Christian” without being sincere about it (xxi), Hall follows most other Christian America advocates in presenting Christianity as a sort of club membership in which one need not be “orthodox” (xxi) or a real believer to be included. “Christian” is a default identity. Neither the Bible nor the creeds and confessions of 18th-century American churches support this notion.

Not a single founder publicly or privately said they intended to create a Christian nation.

Hall proclaims the nation “Christian” because it was “influenced by Christian ideas” (xxii). But how much influence is necessary to rightly attach God’s name to a nation? Hall admits Christian influence was mixed with other influences (45). Is it appropriate to call a mixture/blending of various influences “Christian”? Why pick this one of the various influences? Doesn’t a Christian enterprise require intent to glorify Christ—or can something be naturally or accidentally “Christian”? Not a single founder publicly or privately said they intended to create a Christian nation—in the sense of establishing a nation with the intent to pursue the Christian God’s will or in the sense of intent to base the nation on biblical or Christian principles.

What counts as a “Christian idea”? Is it (a) an idea that is distinctly, uniquely, or specifically “Christian,” (b) a generic idea that isn’t inconsistent with Christianity but could’ve come from multiple sources, or (c) an idea that Christianity shares with other religions or philosophies? Hall relies on the latter two, which makes just about everything in Western culture “Christian.”

Hall argues that Calvinism’s teaching concerning total depravity and sin caused the founders to embrace separation of powers, checks and balances, limited government, and federalism. But the founders actually saw man as an alloy of virtue and vice. Madison said the good and virtuous qualities in man are present “in a higher degree” than man’s bad qualities and that self-government can’t work unless that is true (Federalist #55).

Hall regularly uses the words “sin” and “sinful” in relation to the founders’ views in this area, but they didn’t use the Christian or Calvinist word “sin,” preferring less judgmental words such as “weakness” and “venality.” The founders didn’t cite the Bible or Calvin when making these arguments and establishing institutions based on them. When not crediting Montesquieu, they cited “history” and “the least fallible guide”: experience.

Misusing and misapplying the Bible for one’s own purposes to advance an idea not taught in the Bible isn’t the act of a Christian and doesn’t indicate Christian influence. The key for a Christian is not how many times the Bible is referenced, but how.

To prove the Bible’s singular influence on the founders, Hall cites Donald Lutz’s well-known study that counts references to various sources during the founding period. Is merely counting the number of references (which include “positive and negative citations”) a determiner of “influence,” especially when the bulk of Bible references are simply illustrations, aphorisms, or statements taken out of context to support a concept the Bible doesn’t teach?

Satan quotes the Bible inappropriately for his own purposes (Ps. 91:11–12 in Luke 4:10–11); does that indicate the Bible’s influence on him? Misusing and misapplying the Bible for one’s own purposes to advance an idea not taught in the Bible isn’t the act of a Christian and doesn’t indicate Christian influence. The key for a Christian isn’t how many times the Bible is referenced, but how it’s referenced. Hall admits the founders took passages on spiritual liberty out of context in order to promote political liberty (e.g., Gal. 5:1), then concludes “it is clear that America’s founders understood civic liberty in a thoroughly Christian context.” Is making Scripture appear to say something other than God actually said really a “thoroughly Christian” approach?

In 1744, Elisha Williams based a sermon on the teachings of John Locke, calling him (already by that time) “the celebrated Mr. Lock.” References to Locke are ubiquitous throughout the period. Hall argues Locke wasn’t influential, largely because his work wasn’t printed in America until 1773. But Hall argues the Bible was all-important—despite not being printed in English in America until 1782! It’s not clear why a reference to Locke must come from an edition published in America in order to indicate influence. Hall doesn’t mention that, according to Lutz’s authoritative study, there were more Locke citations than to all Reformed thinkers combined, and that Locke is mentioned in 19 of the 28 pages in Lutz’s chapter on influences.

Hall claims America’s founders “were committed to the core Christian idea that all humans are created in the imago Dei (image of God).” This is the only one of his “Christian ideas” that is distinctly or uniquely Christian; but no evidence to support this claim is given from a founder other than James Wilson quoting Psalm 139, which doesn’t mention the image of God.

Public proclamations of days of prayer and thanksgiving are quoted at length, including those by the self-professed unbeliever John Adams; but no mention is made of the fact that those days were at least partly a ploy to “smoke out” unexposed Loyalist preachers. The fact that Adams, who explicitly denied the utility of “grace,” the work of the “Redeemer,” and the “Holy Spirit,” included these elements in his pronouncements only demonstrates the problem with relying too heavily on public proclamations. The same John Adams also negotiated and signed the 1797 Treaty of Tripoli, which officially declared “the government of the United States of America is not, in any sense, founded on the Christian religion.” Three of the senators who voted for it were delegates to the Constitutional Convention. Yet Hall suggests it doesn’t reflect the founders’ views or really mean what it says, since no one objected to it.

Hall contends that the founders embraced religious liberty, since it’s a Christian principle that God has granted to each individual a right to decide whether and how to worship him as the individual’s “conscience dictates.” Is this a Christian principle? Is this what the Bible teaches? Does God not send people to hell who decide not to worship him the way he demands? Did Paul not say that anyone who teaches any other gospel is “to be accursed” (Gal. 1:8–9)? The founders embraced religious liberty—but not because of Christian principles.

Other than his claim that Christian principles were at the base, Hall is brilliant in the last 100 pages. His treatment of religious liberty, the founders’ understanding of what it means in practice, and its implications for today are masterful. This is Mark Hall’s bailiwick, and he is as knowledgeable and persuasive in this area as anyone else.

Here’s the best sentence in the book: “The assertion that the founders desired to build a high and impregnable wall of separation between church and state is, to put it bluntly, pure fantasy.” Unfortunately, another pure fantasy is the notion that America was founded as a Christian nation, and Did America Have a Christian Founding? isn’t a magic wand.