BY ORDER OF THE AUTHOR,
Per G. G., Chief of Ordnance

With this unilateral prohibition, Mark Twain warns conscientious readers against setting foot in his greatest novel. Like trespassing vandals, we shrug off his violent injunction and enter The Adventures of Huckleberry Finn at our peril—shovel in hand—eager to unearth motive, moral, and plot even if we have to dig them from a dead man’s grave. 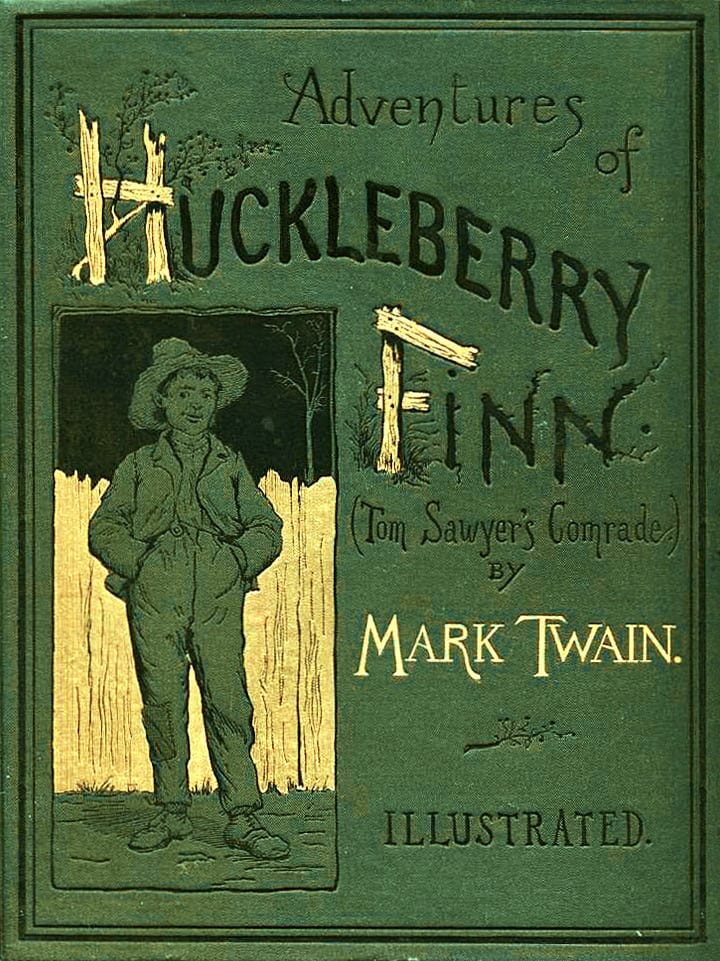 The Adventures of Huckleberry Finn

The Adventures of Huckleberry Finn

The providential hand steering our raft through his novel will not allow us to leave his fictional world the same. We will feel the pinch of conflicts with no clear resolution. We will be confronted by the contradictions in our morals. We will question how we have been shaped by godless societal norms.

Huckleberry Finn is a trove of moral complexities and compelling tales. Yet many readers finish the adventure frustrated by what proves to be a Pyrrhic victory. To them, Twain winks an eye: “Can’t say I didn’t warn you.”

Ultimately for Christian readers, Huck and Jim’s journey down the Mississippi perfectly illustrates why time devoted to a good novel is never wasted.

Twain’s tale chronicles the adventures of a town pariah and a runaway slave. Huck and Jim encounter one another after escaping captivity—Huck from a locked cabin and an abusive father, Jim from Miss Watson and the prospect of being sold to slave traders. The two are forced to try their luck on the river.

Surging through the novel like an unpredictable, undulating serpent is the mighty Mississippi, an irresistible force guiding the events that unfold chapter by chapter. In Huckleberry Finn, providence is an emotionless river—often punishing good men and rewarding scoundrels. Twain lowercases “providence.” It’s not something to trust so much as an inevitability to accept.

In one river town after another, Huck is made an uneasy participant in morally compromised circumstances. He experiences the guilt—rightly or wrongly—of being a murderer, a phony, a coward, and a man-stealer. When he finally tries to do right, everything goes wrong. To Twain we’re all drifters, unable to change the course of events around us and foiled in our best attempts to do good.

Twain’s narrative is constantly hijacked by hucksters, but he proves to be the greatest conman of them all. Creating false hope by reintroducing old pal Tom Sawyer, he then uses Tom to drag out the novel’s conclusion to the point of annoyance. In the end, he gives Tom the honor of revealing the preposterous truth: Jim’s owner died, and he’s been free all along! The sharp blade of irony twists as Jim then reveals a secret he’s kept the whole journey: Huck’s murderous father is dead as well!

Huck and Jim’s fateful decision at the story’s outset was based on false pretenses. They had risked life and limb on the Mississippi—for nothing.

Twain is the ultimate Tom Sawyer. His make-believe adventure confounds the human instinct to search for meaning in this universe: How foolish of you to believe that there is any point to this story—that it has any sort of sensible conclusion or triumphant finish! All human existence sputters to an embarrassing finale. To believe otherwise is to play pretend.

True Character in a Fictional Narrative

Yet Twain’s cynical outlook doesn’t render Huckleberry Finn meaningless, especially for Christians. It’s undeniable that some characters swept up in his epic have been forever changed by their participation in it. Herein lies the value of a good novel: Although the circumstances shaping Huck’s journey are fictional, the character he develops on the Mississippi isn’t.

Midway through the novel, Huck comes to a crisis moment. Emotionally torn, he must choose whether to commit the unforgivable sin: help a runaway slave attain his freedom. Out of love for Jim, Huck makes what he believes to be a damnable decision. First writing a letter to Miss Watson, he changes course: “I studied a minute, sort of holding my breath, and then says to myself: ‘All right, then, I’ll go to hell’—and tore it up.”

Crisis moments make fiction an invaluable gift to believers. If we’re willing to suspend disbelief for a few hundred pages, we can emerge from a good novel changed. In her book On Reading Well, Karen Swallow Prior explains the way fiction forms virtue: “Through the imagination, readers identify with the character, learning about human nature and their own nature through their reactions to the vicarious experience.”

If we’re willing to suspend disbelief for a few hundred pages, we can emerge from a good novel changed.

Christians don’t have to embrace Twain’s fatalistic worldview to benefit from the journey down the Mississippi with Huck and Jim. We know the entire perilous trek—filled with bandits, shipwrecks, starvation, family feuds, and manhunts—is a complete fiction from the start. Nevertheless, Huck’s moral dilemmas have the ability to deconstruct our wrongheaded notions. Real virtues can be built in their place.

To read fiction with no other objective than entertainment is to be like Tom Sawyer. Unlike Huck, he has read the classics, but he misses the point. His mind is stuck in the realm of fantasy. Fiction isn’t merely an escape from reality, but a place where we can develop true character. Christian readers shaped by good fiction will bear good fruit in the real world.

The notice nailed to the beginning of Huckleberry Finn gives us fair warning. The providential hand steering our raft through his novel will not allow us to leave his fictional world the same. We will feel the pinch of conflicts with no clear resolution. We will be confronted by the contradictions in our morals. We will question how we have been shaped by godless societal norms. Even a cynical atheist like Mark Twain cannot help but challenge Christians to grow.

What a wry twist indeed that a novel meant to satirize providence can be used by Providence to transform Huckleberrys like you and me.

​Chad Ashby is a graduate of The Southern Baptist Theological Seminary and Grove City College. He teaches literature, math, and theology at Greenville Classical Academy. You can follow him at his blog After+Math and on Twitter.