The day before I received my copy of Alan Jacobs’s How to Think: A Survival Guide for a World at Odds, I saw a tweet that made me chuckle. Neil DeGrasse Tyson wrote, somewhat wistfully, “In school, rarely do we learn how data become facts, how facts become knowledge, and how knowledge becomes wisdom.” To which someone replied: “Hi Neil, That’s literally what we teach. Thanks for the shoutout! Sincerely, The Humanities.”

A silly exchange, but one that illustrates why Jacobs’s book is both timely and encouraging. Timely, because we’re currently swimming in a sea of punditry, post-truth, partisanship, and perpetual news, which seems to be making engaged thoughtfulness harder and harder. Encouraging, because in spite of all this, Jacobs is optimistic about the possibility of thinking:

I truly believe that there are some insufficiently explored ways to understand and ameliorate the problems we have in thinking. We have thought too much in recent years about the science of thinking, and not enough about the art. There are certain humanistic traditions, some of them quite ancient, that can come to our aid when we’re trying to think about thinking, and to get better at it.

Jacobs is a distinguished professor of the humanities at Baylor, so you might think he wrote this book for intellectuals or academics. He didn’t. In fact, he argues that “academic life doesn’t do much to help one think” since you become an academic by getting good grades, and you only get those if you say what somebody else wants to hear. Rather, he wrote the book for ordinary people who want to learn how to think, which comes through in its length (160 pages), in its style (though most of us want to write like C. S. Lewis, Jacobs pretty much does), layout (spacious pages, clear subsections, and few footnotes), and most of all, in its helpful content.

Here is some of that excellent content (at the risk of reducing a beautifully written essay to a series of clunky imperatives):

Some of these suggestions—many, perhaps—might seem like sheer common sense, and they probably are. So why bother reading the book, rather than a quick summary like this? I suggest three reasons.

The first is Jacobs’s excellent use of stories to illuminate the complex ways in which people think, reason, and change their minds. Why didn’t Wilt Chamberlain shoot underhanded, even though he knew his free-throw percentage would improve if he did? How did a member of Westboro Baptist Church change her mind? What was happening under the surface in the responses to Ta-Nehisi Coates’s essay on reparations? How did Leah Libresco convert to Roman Catholicism? What is life like for a person who can’t feel fear and has to rely on reason to avoid danger? Jacobs’s stories are harder to summarize than his imperatives, but in the end they’re much more enjoyable, and much more useful.

The second is the superb range of writers Jacobs summarizes in his argument. Rarely have I read a book that draws on so much material that I love and presents the highlights of each work so crisply yet faithfully. We have Lewis Carroll on language, G. K. Chesterton on H. G. Wells, Lewis on Bulverism and “The Inner Ring.” We get Jonathan Haidt’s The Righteous Mind and Scott Alexander’s “Why I Can Tolerate Anything Except the Outgroup.” We hear Dorothy Sayers on whether women are humans, David Foster Wallace on grammar, and Patrick Deneen on critical thinking. Most impressively, we receive a summary of each contribution that gets straight to the heart and expresses it pithily while at the same time rendering it accurately. As such, How to Think is both a good read and a distillation of a number of other good reads.

And the third is that, at least from where I’m standing, few people need to hear the challenge of How to Think more than those of us who frequent websites like this. Theologically conservative, high commitment, young(ish), literate Christians who enjoy debate and spend a lot of time online—people, that is, just like me—are exactly the sorts of people at risk of not thinking, as Jacobs defines it in this book. 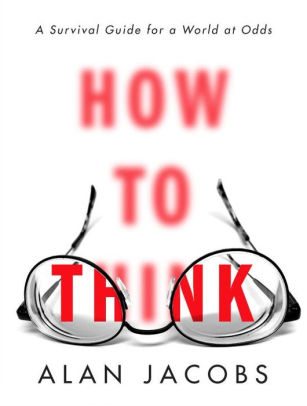 How to Think: A Survival Guide for a World at Odds

How to Think: A Survival Guide for a World at Odds

As a celebrated cultural critic and a writer for national publications like The Atlantic and Harper’s, Alan Jacobs has spent his adult life belonging to communities that often clash in America’s culture wars. And in his years of confronting the big issues that divide us—political, social, religious—Jacobs has learned that many of our fiercest disputes occur not because we’re doomed to be divided, but because the people involved simply aren’t thinking.

Most of us don’t want to think. Thinking is trouble. Thinking can force us out of familiar, comforting habits, and it can complicate our relationships with like-minded friends. Finally, thinking is slow, and that’s a problem when our habits of consuming information (mostly online) leave us lost in the spin cycle of social media, partisan bickering, and confirmation bias.

In this smart, endlessly entertaining book, Jacobs diagnoses the many forces that act on us to prevent thinking—forces that have only worsened in the age of Twitter, “alternative facts,” and information overload—and he also dispels the many myths we hold about what it means to think well. (For example: It’s impossible to “think for yourself.”)

Drawing on sources as far-flung as novelist Marilynne Robinson, basketball legend Wilt Chamberlain, British philosopher John Stuart Mill, and Christian theologian C.S. Lewis, Jacobs digs into the nuts and bolts of the cognitive process, offering hope that each of us can reclaim our mental lives from the impediments that plague us all. Because if we can learn to think together, maybe we can learn to live together, too.

We frequently live in self-reinforcing bubbles; we erect strawmen; we Bulverise; we divide the world into heroes and villains, “defenders of the faith” and “repugnant cultural others”; we find it easy to react and hard to listen; we valorize and demonize; we put ourselves on the side of the angels and find it hard to see good in our out-group. (If you don’t believe me, type “Nashville Statement” into Google.) In our less self-aware moments, we even use the false “we.” We are, that is, precisely the people for whom Jacobs wrote this book, whether he meant to or not.

How to Think is well written, well reasoned, well presented, and well worth reading. Think about such things.