In 1834, the captain of a canal boat was gravely ill. His fellow boatmen called a doctor, who said, “There is no use. He’s a dead man.” John Clute, though pronounced dead, heard every word. “It then seemed to me,” he later said, “I died and heaven was opened and then I saw more human beings soaring through one another so happy.”

It was a classic near-death experience, one that between 4 percent and 15 percent of Americans claim to have had. For many Christians, stories like these have become powerful confirmations of their faith and their hope in the glorious life to come. They offer beautiful stories of reunions with family members, a feeling of indescribable peace, and visions of beauty surpassing anything on this earth. Readers, finding comfort and hope in these stories, have made bestsellers of books like 90 Minutes in Heaven, 23 Minutes in Hell, Glimpses of Heaven, and now Heaven Is for Real. This latest revelation has reached the top of The New York Times bestseller list.

But for the faithful, the story of the boat captain John Clute offers a warning to Christians about where we seek proof of heaven. Clute’s experience confirmed him in his prior unbelief. “I did not believe in the divinity of Jesus Christ,” Clute said of his theology before his beatific vision, “nor do I yet.”

If he was able to reach heaven without belief in Jesus, why should he change his views upon return to his earthly body? This is the dilemma that books like Heaven is for Real: A Little Boy’s Astounding Story of His Trip to Heaven and Back ( confront Christians with. While they seem to provide heaven-sent assurances of the hereafter, they subtly undermine those assurances when others (as they have throughout history and among a variety of religions) claim to have the same experience.

Heaven Is for Real seeks to prove that element of our faith that is farthest from empirical proof. In the form of a 4-year-old boy, first his family and church and now all his readers are able to know for sure that heaven awaits us. The proof is here if we only but listen to it. Yet this is exactly what Jesus said would not happen. In his parable of the rich man and Lazarus, Abraham tells the man suffering in hell, “If they do not listen to Moses and the Prophets, they will not be convinced even if someone rises from the dead” (Luke 16:31). So what are we to make of these stories?

Colton Burpo was misdiagnosed while he was suffering from a burst appendix. After far too long, another doctor discovered the mistake, diagnosed the appendicitis, and immediately took him into surgery.

Colton shouldn’t have survived. More than a week since the appendicitis was first misdiagnosed, his gut was filled with poison and infection. However, after the surgery, he began a rocky but rapid recovery. And then, when the Burpo’s life seemed as if it had returned to normal, the revelations began.

The family was driving through the same town where doctors operated on Colton. They asked, jokingly, if he wanted to return, and Colton said he remembered the hospital as the place where the angels came to visit him. He said he had been to heaven where he sat on Jesus’ lap, and he also recounted seeing his parents in separate parts of the hospital. It was a stunning revelation, as both parents were in private desperation. Colton accurately described what was happening while he was in surgery, and later he even identified his long-dead great grandfather through a picture he had never seen before. While in heaven, Colton met his sister who had been miscarried, and who Colton learned about for the first time while in heaven. Colton both stunned and comforted his parents by revealing the gender of the miscarried baby as well as describing her appearance. 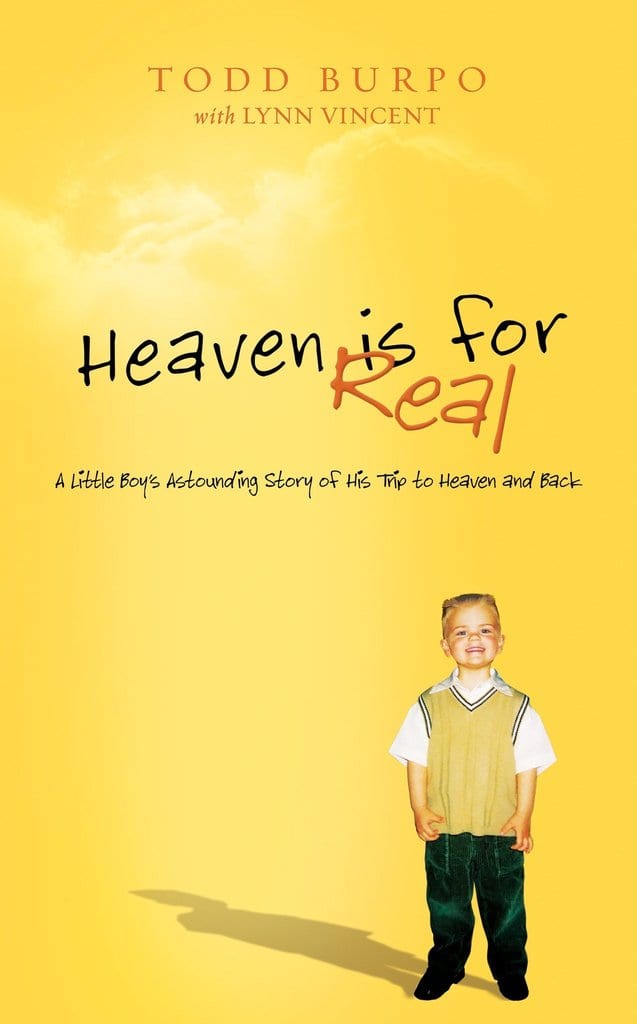 Heaven Is for Real is the true story of the four-year old son of a small town Nebraska pastor who during emergency surgery slips from consciousness and enters heaven. He survives and begins talking about being able to look down and see the doctor operating and his dad praying in the waiting room. The family didn’t know what to believe but soon the evidence was clear.

Much of the book is the slow unraveling of these stories of someone just returned from heaven. The place is full of bright light, given by God. And the light is full of color. People fly around with their wings, and some people’s wings are larger than others. It’s all very, well, weird the author repeatedly says.

Colton’s heaven seems to confirm every children’s Bible picture book and Sunday school lesson. And many stories confirm specific Bible passages or church theology. One time, Colton looks at his dad. “Did you know that God is three persons, Dad?” But Colton, at age 4, hadn’t yet seen illustrations of heaven or understood deep theology, his dad says. Colton’s stories are proof. Heaven is for real.

Colton’s dad, a pastor, describes what was so important about his son’s revelations.

How many times when I presided over a funeral had mourners delivered the usual well-meaning platitudes: “Well, she’s in a better place,” or “We know he’s looking down on us, smiling,” or “You’ll see him again.” Of course, I believed those things in theory, but to be honest, I couldn’t picture them. Now, with what Colton had said about Pop and about his sister, I began to think about heaven in a different way. Not just a place with jeweled gates, shining rivers, and streets of gold, but a realm of joy and fellowship, both for those who are with us in eternity and those still on earth, whose arrival we eagerly anticipated. A place where I would one day walk and talk with my grandfather who had meant so much to me, and with the daughter I had never met.

I have no reason to doubt this little boy’s story, or that of Don Piper, author of 90 Minutes in Heaven. But these bestselling stories, like Colton’s, are so comforting because they are also so familiar. And that is exactly what makes their popularity so troubling.

Whose Heaven Is for Real?

Stories of near-death experiences are not limited to Christians. Similar stories are told around the world, often substituting local religious figures for Jesus. So if we are to find empirical or experiential verifications of our theology, should we then change our theology when non-Christians find the Buddha or other spiritual beings in their own versions of heaven?

Carol Zaleski in The Life of the World to Come writes, “Stories of people who return from death, bringing back eyewitness testimony about the other world, can be found in nearly every religious tradition, and although they have many similar features, such reports invariably portray this experience in ways that conform to cultural expectations.”

These experiences have been told and retold for centuries. In her review of near-death literature, Zaleski did find something unique-not about Christianity, but about modern accounts.

Most striking, of course, is the absence from most twentieth-century near-death accounts of postmortem punishment: no hell, no purgatory, no chastening torments or telltale agonies at the moment of death. . . . The possibility for loss is genuine in the medieval accounts-if one botches the second chance, eternal damnation is the likely result. Today it seems that there is scarcely any possibility for loss. Life and the afterlife flow together as an unending stream of fresh opportunities for personal growth.

Those Who Have Not Seen

So what are we to make of Colton’s story and those of others who have had profound personal experiences in which they seem to have been given glimpses of eternity? We have a particular challenge, because the Bible seems to countenance the experience. Paul said, “I know that this man was caught up into paradise-whether in the body or out of the body I do not know, God knows-and he heard things that cannot be told, which man may not utter” (2 Cor. 12:3–4). And, while on Patmos, John was in the spirit on the Lord’s Day when he received his vision.

At the same time, in his parable of the rich man and Lazarus, Jesus suggests that stories from the afterlife are of no spiritual value. Moses and the prophets offer all the spiritual proof anyone needs. And as Jesus told Thomas, “Because you have seen me, you have believed; blessed are those who have not seen and yet have believed” (John 20:29).

It seems that as Christians, we are to put no stake in these stories. But we must say something, not only because of the popularity of these accounts, but also because the stories themselves deserve to be set within the context of the spiritual life.

I don’t offer a full explanation or Christian theology of near-death experiences. But I do have two thoughts.

First, our extra-biblical stories of heaven—I prefer to talk about our future life with God—would be better if they were based on the accounts told by the dying, rather than the once-dead but well again. I cite no biblical support for this preference, but I believe it provides a more realistic context for the open window to eternal life with God.

Jesus is the resurrection and the life, but he also said a grain of wheat must fall into the ground and die before it will bear fruit. Those who work with the dying are full of stories of heaven as told by the dying themselves. They confirm our hope in eternal life. But they are usually told in the context of someone who has undergone a slow deathbed transition from here to there. In a sense, they exist in two spheres, and their accounts are less about golden streets and happy relatives. These narratives instead offer a sense of peace and an unmistakable certainty of the ongoing life of the person.

My second thought is this: Our access to heaven does not depend on our death. Rather than tell stories from beyond the grave, why don’t we instruct believers on experiencing eternal life here and now? While reading this book, I was also listening to Joe Carter talk about the African American spirituals on the NPR show Being. He spoke of a spiritual reservoir that the slaves sustained so that while they were in bondage, they were also free in spirit. He spoke of the line “fly away to Jesus” as conveying the sense of a literal escape to freedom in the north as well as immediate spiritual communion. I wish that our yearning for life with God were not so easily satisfied by reading these stories of near-death experiences.

I wish that Christians more and more sought not to witness the wings of the angels but to be in the spirit—on the Lord’s Day and every other day of the week.

Rob Moll is author of What Your Body Knows About God and The Art of Dying. He has written for Christianity Today, The Wall Street Journal, The Washington Post, and other publications.

3 Untamed: The Gospel of Glennon Doyle

4 A Prayer for Mercy