Around the world, people roughly 55 and older recently reminisced about where they were when JFK was shot in 1963. If you were much older than age 5 or so, you likely remember the moment the news reached you. I know because I was 10 at the time.

I remember another shocking moment some years later in my mid-20s. I had finally found some Christian direction in my life and was attending a Baptist college (after dropping out of the University of Montana—twice!). My church history professor in the large required “Baptist Denomination” class asked for a show of hands: How many of you believe Jesus died for everyone? Dumb question, I thought; who doesn’t know John 3:16? All hands went up.

Except for one older student. He waited for the follow-up question: How many believe Christ died only for the elect? He extended his hand. The classroom murmured. The professor made a nervous and, as I recall, somewhat tasteless joke at the student’s expense. I was stunned. Not at the joke, nor even at the lone hand. It was the question. The possibility had never occurred to me.

The fact that my professor admitted Charles Spurgeon held this view gave me pause. But I had a hard time locating reading material on the subject. If only the book under review here had been available to me! From Heaven He Came and Sought Her: Definite Atonement in Historical, Biblical, Theological, and Pastoral Perspective is a one-stop crash course in what the doctrine teaches, who despises it and why, who affirms it and for what reasons, and what are its implications.

Don’t expect fireworks. The editors’ preface devotes half its space to affirming irenics rather than polemics. It warns not the opponents of this doctrine but its friends against self-righteousness. Even readers who may not detect much grace in the doctrine will be hard-pressed not to recognize it in the preface and tone throughout the book. No doubt J. I. Packer’s foreword (not included in my pre-publication review copy) will likewise exude his customary peaceable tone. 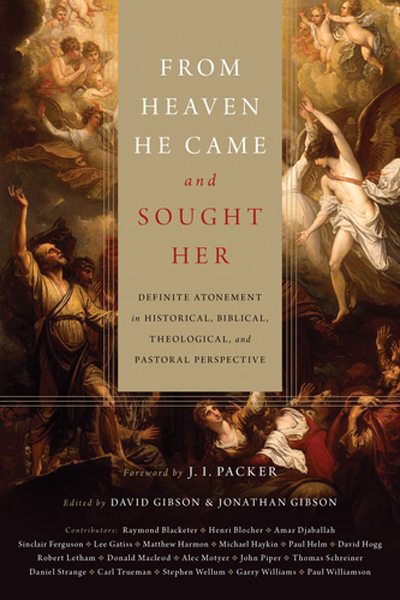 But is the book convincing? Each reader will have to decide. One should note that the editors (who are brothers) didn’t grow up believing the doctrine, but instead came to it as young adults and by different routes. But what matters, of course, isn’t how the editors came to this conviction but the biblical basis for it, if there is one. Here I think most readers will be inclined to concede that From Heaven He Came and Sought Her at least presents numerous telling analyses and arguments.

The opening chapter by the editors, David Gibson (minister of Trinity Church in Aberdeen, Scotland) and Jonathan Gibson (PhD candidate in Hebrew studies at Cambridge University), maps out the volume’s approach [read an interview with the Gibsons here]. It includes this helpful definition:

The doctrine of definite atonement states that, in the death of Jesus Christ, the triune God intended to achieve the redemption of every person given to the Son by the Father in eternity past, and to apply the accomplishments of his sacrifice to each of them by the Spirit. The death of Christ was intended to win the salvation of God’s people alone. (31)

The same section contains careful acknowledgement of objections to the doctrine, not from straw-man critics but from luminaries like John Wesley, D. Broughton Knox, R. T. Kendall, Karl Barth, John McLeod Campbell, J. B. and T. F. Torrance, and Bruce McCormack. The editors do not make their task easier by suppressing the most formidable critics of definite atonement.

Nor do they simplify the nature and range of historically significant objections. They respond carefully to the varying positions of semi-Pelagianism, Arminianism, Amyraldianism, hypothetical universalism, and the theology of Karl Barth.

An important topic, and great contributors. As I write, it is December. Is this book perhaps one you should give to others or put on your own Christmas list?

The answer is no if you believe strongly in “unlimited” or “universal” atonement and do not wish to have your holiday cheer disturbed. While the book lacks fireworks (as already noted), it does engage many detractors of definite atonement like McCormack (and his inspiration Barth), M. Eugene Boring, Mark Driscoll, Bruce Ware, David Allen, Clark Pinnock, and several others. In my opinion, it does so effectively.

Nor should you buy or request this book if you are uninterested in scholarship. The “extent of the atonement” is a subject that invites facile pseudo-solutions that cite favorite texts. More than one writer in From Heaven He Came and Sought Her reflects on the multiplex approach required to do justice to the wealth of relevant biblical material and the several domains of theology that must be brought to bear in treating this subject. Many contributors engage in fresh interaction with little-known primary sources. I especially appreciated Amar Djaballah’s thorough summary of Amyraut’s Brief Traitté de la Predestination et de ses principales dependances, an important though untranslated work. Many other chapters display similar erudition.

Do not buy or request this book if you’re seeking bedtime reading that will lull toward sleep. The contributors make their case not in the abstract but in lively engagement with a wide range of discussion partners. You are more likely to produce adrenaline than melatonin as writers like Henri Blocher make common cause with some (like Don Carson, John Frame, and Packer) and then square off against others (like David Allen, whom Blocher terms “thought provoking”; Barth and McCormack; and Gary L. Shultz Jr.).

Finally, this is not a book for anyone who wants to languish in indifference toward evangelism and missions. To truly know the doctrine of definite atonement, “by the working of God’s Spirit, enflames the cause of world missions” (631). Many charge that this doctrine vitiates the will to tell everyone about Christ—what’s the use, if Christ didn’t die for everyone?. But this book often touts the confidence and ardor for God and his saving good news that should fill those who hold this doctrine. They know, as Packer puts it (see pp. 558-59), that while “God loves all in some ways” (and so we should reach out to all), “God loves some in all ways,” thus assuring ministers of God’s gospel that their missional labor will emphatically not be in vain.

John Piper phrases it well. After listing five powerful pastoral and personal benefits of “knowing and experiencing the reality of definite atonement” (659-61), he rightly states: “Preaching, which aims at world evangelization . . . should speak of the achievement of the cross in its fullness” (661). For the contributors to this volume, this fullness is rooted in the specificity of the Son’s intent in laying down his life for God and for his people.

And so, as the editors state at the outset, “Christ’s death for his people does not contradict his mandate to proclaim the gospel to the world” (16). Or as they put it positively, “God is glorified when he is seen and savored and enjoyed for what he actually bestows: saving grace. In this glorification, we his creatures are made whole and healthy, worshiping and happy, and commissioned as his ambassadors in his world—soli Deo gloria” (51).

Editors’ note: For a different perspective on the book, see Jason Duesing’s review. You can also read an interview with the editors.