“The man is the head, but the woman is the neck, and she can turn the head anyway she wants.” These words, spoken by Nia Vardalos’s mother in My Big Fat Greek Wedding, neatly summarize what women have recognized for centuries: it’s not necessary to have a position of authority to have influence.

That’s not to say a woman should use her influence to subvert a man in authority or manipulate her husband to get her way. I write from the perspective of a happy complementarian. I believe God has ordained that men—and not women—hold certain positions of authority in the church and the home, and that this authority should be real and not superficial. Nevertheless, it’s instructive to look at the effects of authority (or the lack of it) given to women and examine the ways that closing off any one valve of power may unintentionally open another. 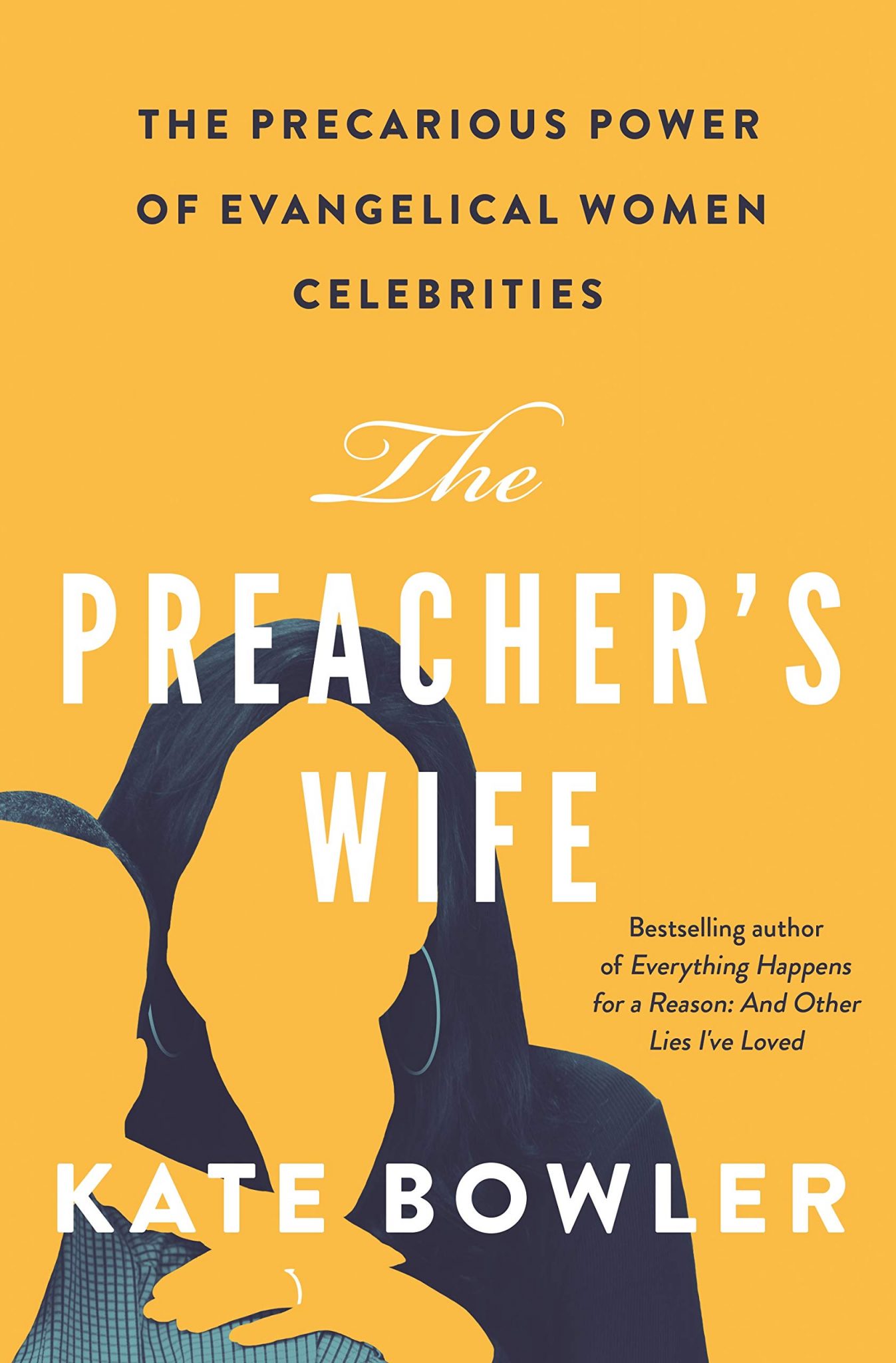 The Preacher's Wife: The Precarious Power of Evangelical Women Celebrities

The Preacher's Wife: The Precarious Power of Evangelical Women Celebrities

Kate Bowler does just this in The Preacher’s Wife: The Precarious Power of Evangelical Women Celebrities. Despite the title, this book isn’t simply about pastors’ wives. Focusing on the 1970s to the present, Bowler chronicles the role of women—particularly well-known women—in megachurches and in “megaministries” like publishing, broadcasting, and parachurch organizations.

Bowler, a historian who teaches at Duke Divinity School in Durham, North Carolina, looks at the place of prominent women in five categories. (1) “The Preacher” considers women with gifts in teaching the Bible. (2) “The Homemaker” examines how prominent Christian women are often extolled for their dedication to their families and home. (3) “The Talent” surveys the path of women with unique talents, especially in musical performance. (4) “The Counselor” looks at the question of transparency in ministry—how honest women can be or have to be about their own failings in order to resonate with audiences. (5) “The Beauty” considers the role that physical attractiveness plays in elevating women to prominence.

Bowler writes as a church historian, and the book has the feel of social science. Her role is to report what people believe and how they act, rather than to critically evaluate any particular group’s theology or practices. Her style has been described as “even-handed.” There are plenty of judgments made in the book, but these primarily come through the voices of women Bowler interviewed rather than her own.

The Preacher’s Wife is a dense book with lots of data as well as poignant anecdotes that yield numerous valuable insights. I’ve picked just three that are relevant to readers of The Gospel Coalition.

1. Gifted women belonging to denominations that restrict women’s roles in the church frequently exercise their gifts in the marketplace or parachurch ministries.

Had I been born a man, I probably would’ve pursued ordained ministry. Instead, I’ve made my career in three different parachurch ministries, attending seminary along the way. Complementarian women who go to seminary generally have three career paths open to them: church ministry to women or children, missions, or work in a parachurch organization.

Women who show giftedness in teaching the Bible might lead church-based women’s Bible studies, but they’re just as likely to become leaders in Bible Study Fellowship or Community Bible Study. And women who might’ve excelled at preaching sermons instead write popular blogs leading to book deals with Christian publishers.

Bowler quotes one Pentecostal woman’s analogy: “If the pulpit is the man’s Holy of Holies, then the parachurch was like the temple’s outer courts, where the women were allowed” (19). Perhaps this observation was meant to be wry, but it expresses something thoroughly biblical. Just as there were areas of the temple into which women weren’t allowed, there are areas of authority into which women aren’t permitted. Nevertheless, there are authorized arenas for women to minister to God’s people.

It’s worth attaching a caution to this observation. Parachurch ministries and organizations like publishing houses are more susceptible to outside forces than churches are. Decision makers—like boards and editorial teams—must keep one eye on market forces and consider financially viability, at times making decisions based on what will satisfy donors or what will make a profit. Women employed in these spheres need to stay alert to outside pressures and consider whether they align with biblical priorities.

2. Ironically, preaching a message that the home should be a woman’s primary sphere of influence can lead to a large, influential platform.

Three of the celebrities covered in The Preacher’s Wife were known for emphasizing the importance of the domestic sphere for women. Dorothy Patterson downplayed her two doctoral degrees when she co-edited The Christian Homemaker’s Handbook and founded a conference called The Art of Homemaking. Elisabeth Elliot wrote books on godly femininity and spoke on her radio program about submission within marriage. Phyllis Schlafly (who was Catholic rather than evangelical) gained public prominence and a wide following for opposing the Equal Rights Amendment, which she considered a key piece of the feminist, anti-family agenda.

If evangelicals are going to prize homemaking as valuable and godly, we need good teaching on it from men and women. That speaking on the value of the home will take some women out of it and onto the conference circuit makes them the exception that proves the rule. This irony isn’t confined to evangelicals. The Pioneer Woman, for example, started a blog about the life of a “country housewife” and now runs a large business empire focused on enjoying the simple comforts of home.

In denominations where women’s roles in the church aren’t restricted, they may be given positions of authority ranging from senior pastor to bishop or convention president. But surprisingly, this doesn’t mean they’re influential in their denominations or the outside world. Bowler writes, “To overstate the case only a little, we might say that conservative women gained considerable influence without institutional power, while liberal women gained institutional power without considerable influence” (27).

Why is it that a female bishop with great institutional authority is unlikely to write a book that sells well, while women who describe themselves primarily as wives and mothers turn out bestsellers?

Why is it that a female bishop with great institutional authority is unlikely to write a book that sells well, while women who describe themselves primarily as wives and mothers turn out bestsellers? Which of these kinds of women has more influence? Or who has the greater power: the female pastor of a small liberal congregation or the teacher of a women’s mega Bible study?

God’s Word never commands us to seek power or influence; in fact, it teaches that the first will be last and the last will be first (Matt. 19:30). Nevertheless, it’s worthwhile to recognize that God can give power and influence where he chooses, regardless of whether we fit into categories the world associates with power.

The Preacher’s Wife is a study of evangelical women celebrities. As to what an evangelical is, Bowler writes:

In these pages, I refer exclusively to the modern American iteration that emerged from the fundamentalist-modernist controversy of the earliest 20th century. Evangelicals are known for their emphasis on scripture, conversion, revivalism, and later, a subculture that defines their place over and against the wider American culture (xv).

Most of the book does focus on evangelicals (within which Bowler includes Pentecostals), and the comparison of celebrity evangelicals with their mainline and progressive counterparts is illuminating (see insight #3, above). But some of the attention given to non-evangelical women and their situations distracts from the overall narrative. Bowler spends pages on mainline churches and their attitudes toward women like Lutheran pastor Nadia Bolz-Weber.

As I consider my influence on my church family and the wider world, I want to cultivate the ministry of availability.

The book’s final anecdote, related as if it sums up the complex relationship of women to power, isn’t about an evangelical but about Amy Butler, former pastor of New York’s Riverside Church. Riverside Church, founded by Henry Emerson Fosdick in 1930 during the fundamentalist-modernist controversy, was from its inception deeply anchored in 20th-century Protestant liberalism. Few churches are less likely to be described as evangelical. Bowler presents this concluding anecdote as if it summarily explains the position of evangelical women, when, in reality, Butler herself is anything but.

While I found these digressions into mainline and progressive churches interesting, the book would’ve been more coherent if Bowler had maintained a narrower focus.

The Preacher’s Wife is a study in celebrity influence, but it left me thinking about kingdom influence. I’m a preacher’s wife and a writer; should I seek to build a platform in order to influence more people for good?

There’s no simple answer to that question, but we do have some straightforward guidance in Titus 2. What does godly influence look like? Older women are to teach younger women to love their husbands and children and to live lives of purity and self-control. Can these things be taught via Instagram or a Christian conference? I believe they can, but those aren’t the ordinary means of godly influence.

When I think of a person who personified godly influence, I’m reminded of the wife of one of my college professors. Nita Martindale didn’t have a full-time job, and her only child was grown. She spent much of her time mentoring female college students. She had no official role at the college, but unofficially, her home was where students went when they needed motherly advice. She didn’t have a platform or a following; what she had was availability, a commodity rarer than rubies in the 21st century.

As I consider my influence on my church family and the wider world, I want to cultivate the ministry of availability. This will involve saying no to good opportunities for gospel ministry, perhaps even some that would bring me more influence. Jesus prizes faithfulness (Matt. 25:23), and the pursuit of celebrity status or influence for its own sake is more likely to distract us from that calling than to fulfill it.