Tony Reinke said it perfectly—Randy Alcorn’s new book, Happiness, is a “200,000-word encyclopedia on joy.” Its 450-plus pages present the most comprehensive Christian treatment of happiness I know, resulting in one of the most enjoyable, exciting, and exuberant books of theology I’ve read in a long time. It’s one of those rare, potentially life-changing books that has the ability to positively transform our view of God, the Bible, the world, and the Christian life.

Unlike some books that seem to have been thrown together in a weekend, Happiness took three years to write. And it shows. There’s a remarkable breadth and depth in Alcorn’s teaching on what the Bible says about happiness, his presentation of what theologians throughout church history have said about it, and his analysis of why the church and culture have been moving in opposite directions on the subject—the church often viewing happiness with suspicion while the culture worships at its feet.

Alcorn, prolific author and president of Eternal Perspective Ministries, is on a mission is to reclaim happiness for the Christian and the church by demonstrating that it’s ultimately rooted in the character of God; that it’s a desirable and possible Christian experience; and that, although different to what unbelievers are pursuing, it’s a valuable bridge to the unbeliever’s world.

After a brief introduction that begins to clear away false ideas of happiness and define it in biblical and God-centered language, Happiness divides into four main parts:

What Happiness Is and Is Not

Numerous themes are threaded throughout the book. Here are the eight most signficant ones:

1. Happiness is the most universal human desire. Alcorn demonstrates that believers and unbelievers have identified happiness as a basic human need throughout history. It’s not just a modern self-obsession, in other words, but a thirst that’s deeply embedded in God’s original creation. Although misdirected since the fall, this longing for happiness is present in every age and culture, and is also frequently recognized in the Bible.

2. Happiness is rooted in the character of God. Alcorn’s treatment of God’s happiness is the most powerful section in the book. Only when we grasp that God is happy can we believe that God wants us to be happy. The reason more Christians don’t experience happiness and joy, Alcorn contends, is that they don’t believe God is himself happy and therefore they don’t seek their happiness from him. Although pointing us to God as the primary (and only direct) source of happiness, Alcorn also highlights many secondary and indirect sources of happiness God has graciously provided. 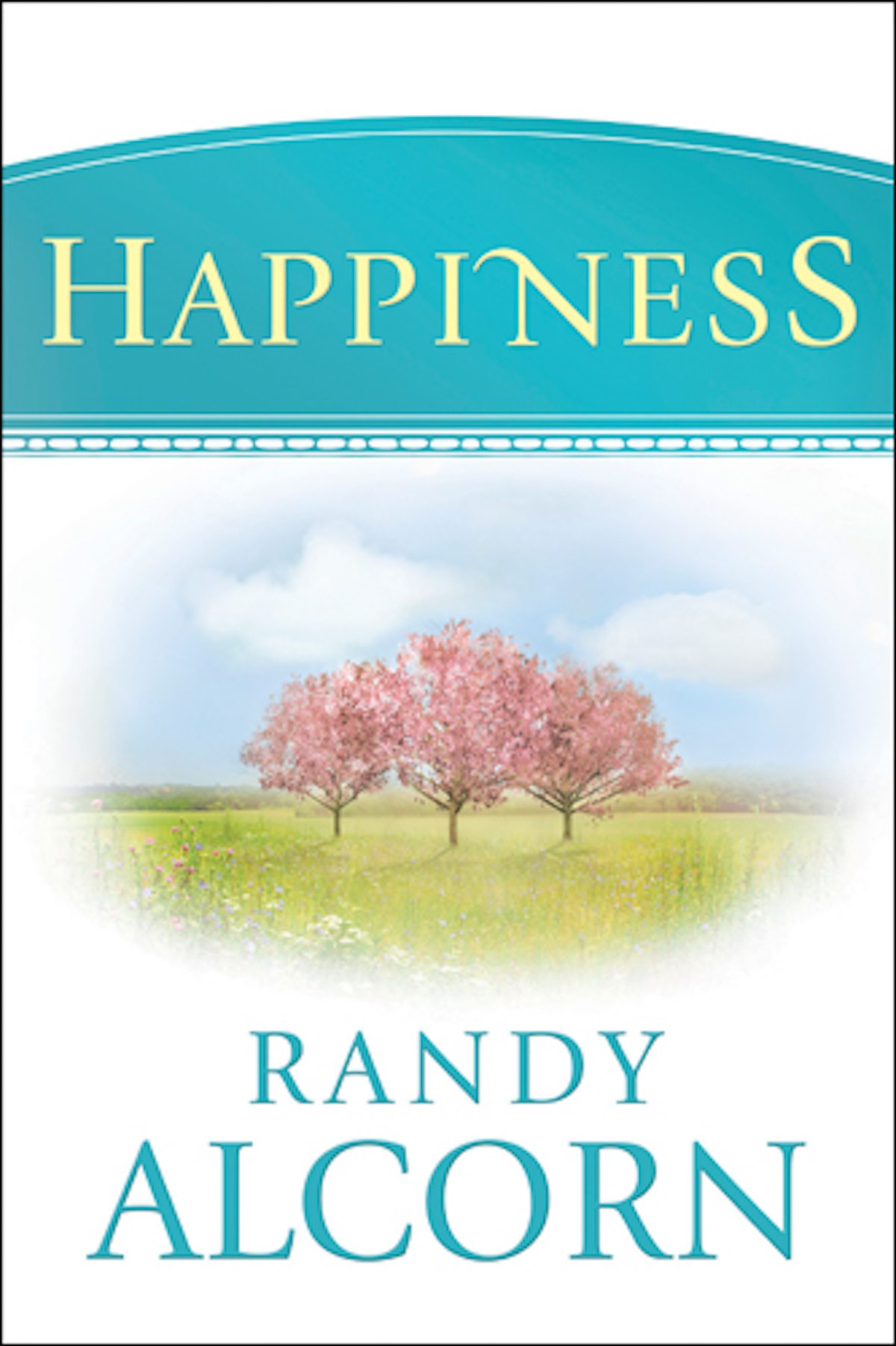 3. Happiness is found throughout the Bible. If happiness is rooted in God’s character, we shouldn’t be surprised that it’s found throughout his Word. What is surprising, though, is just how much it’s in the Bible. Although he overcounts some words in his survey, Alcorn proves that many of the words our English versions translate “joy,” “delight,” “gladness,” and so on are synonyms for Greek and Hebrew words that all mean happiness. So central is happiness to the gospel that if our gospel doesn’t produce happiness, it’s not the true gospel.

4. Happiness has been promoted and enjoyed by godly Christians throughout history. Perhaps the strongest point of Alcorn’s book is the remarkable multiplicity of quotes about Christian happiness from the early church fathers, the Reformers, the Puritans, Spurgeon, and many other more recent theologians. This shows that throughout Christian history even the most orthodox and conservative believers have embraced and enjoyed happiness rather than viewing it with caution and suspicion.

5. Happiness is a commendable, desirable, and possible Christian emotion and experience. Alcorn deals death blows to two false dichotomies, demonstrating how the Bible makes no distinction either between joy and happiness or between holiness and happiness. Rather, happiness and joy are synonyms, and you cannot have happiness without holiness (and vice versa). The distinction we should be pressing is between false happiness and authentic happiness.

6. The world has perverted happiness and made a god of it. Driven by what the world views as happiness, Alcorn is at pains to say what happiness is not—it’s not superficial, selfish, or dependent on circumstances. Neither is it positive thinking that ignores life’s negatives. He openly discusses his own struggles with depression, acknowledging that “our happiness will be punctuated by times of great sorrow, but that doesn’t mean we can’t be predominantly happy in Christ.”

7. We must reclaim happiness without shame or embarrassment, redefine it in biblical terms, call Christians to it, and help Christians to grow in it. The church has overreacted to the world’s perversion of happiness by diminishing, downplaying, and even despising happiness. However, as John Broadus said:

The minister may lawfully appeal to the desire for happiness and its negative counterpart, the dread of unhappiness. Those philosophers who insist that we ought always to do right simply because it is right are not philosophers at all, for they are either grossly ignorant of human nature, or else indulging in mere fanciful speculations.

Through biblical research and biblically-sifted secular research, Alcorn outlines many practical ways for the Christian to pursue and enjoy happiness.

8. Happiness is one of the best witnesses and bridges to the unbeliever. On the basis of the preceding, Alcorn concludes that unless the church recognizes happiness as a massive God-given point of contact with the world—and uses it to connect with unbelievers—it’s cutting off one of its biggest and best bridges. He quotes J. C. Ryle:

It is a positive misfortune to Christianity when a Christian cannot smile. A merry heart and a readiness to take part in all innocent mirth are gifts of inestimable value. They go far to soften prejudices, to take up stumbling blocks out of the way, to make way for Christ and the gospel.

Alcorn’s argument is clear and compelling. The evidence he presents from both Scripture and church history is overwhelming. His promise of God-centered happiness is appealing and motivating. His helps toward happiness are practical and doable. Happiness is a book I expect to be recommending regularly. But I do have two reservations about it, which, due to the limitations of space, I’ll present in the form of questions for further consideration.

1. When does sanctified imagination become unwarranted speculation? As I read Happiness I remembered the thoughts I had when reading Alcorn’s book Heaven. It too is a wonderful and much-needed book that beautifully and helpfully emphasizes the physicality of heaven as opposed to a hyper-spiritual view of heaven. However, many who needed to hear that message were given reason to refuse it by Alcorn sometimes going too far beyond Scripture in his speculation about what heaven would be like.

Similarly, with Happiness, I fear its vital message may be rejected by some who need it most simply because Alcorn goes too far in speculations about what kind of happiness is in God (for example, laughter within the Trinity, God roaring with laughter as he created the giraffe and other animals, and so on), about Jesus’s humor (for example, he had incredible wit and will have the most contagious laugh in heaven), and about what kind of happiness will be in heaven.

On that last point, Alcorn’s stress is almost exclusively on heaven’s continuity with this world, and takes insufficient notice of known discontinuities (such as marriage) and their implications. Add on quoting a few questionable theologians (including open theist Terence Fretheim), a smorgasbord of Bible versions, and a positive view of pictures and movies about Jesus, and I’m afraid Alcorn may give too many excuses to too many people to too easily dismiss his message.

2. Does the book give a sufficient account of anthropopathism (the Bible’s ascription of human feelings and passions to God) when explaining God’s happiness? While Alcorn does attempt in a couple places to distinguish God’s experience of happiness from normal human experience, I think he sees too much analogy and too little distinction. It’s a notoriously difficult area to achieve theological balance, of course, but there’s more work to be done in order to do justice to both the vocabulary and theology of Scripture.

Book of the Year

One last thought: I desperately want the message of Happiness to get into people’s hands and hearts—and especially into pastors’ studies and sermons. But weighing in at 450 pages (plus 30 pages of endnotes), its size is a formidable barrier to most readers today. I certainly see the need for the bigger version—to present the extensive evidence and research to pastors and scholars—but I’d love to see a 150–200-page summary version, which could be easily achieved by cutting most of the innumerable “happy” quotations from throughout church history. [Update: There is in fact a smaller, 96-page version titled God’s Promise of Happiness.]

All that said, for its positive effect on my own soul, for its capacity to radically transform Christians’ lives, and for its potential to improve the church’s evangelistic message, Happiness is my 2015 book of the year, and I pray God will make it the most-read and happiest “encyclopedia” ever published.