A lot of us have high ideals for ministry. Mark Dever is a man whose ministry at Capitol Hill Baptist Church has been marked by an unswerving faithfulness to his biblical ideals. In the early 2000’s, Dever spent several years’ worth of Sunday evenings giving one-shot sermons of every book in the Bible. Any pastor who holds biblical theology in esteem salivates over what a remarkable journey it would be to take one’s congregation through the entirety of the scriptures. Any pastor who is constrained by 24 hours in his days and 7 days in his week has heart palpitations at the thought of preparing 66 of those sermons.

The fruit of Dever’s labor was not just limited to his congregation, though. Dever published The Message of the Old Testament: Promises Made and The Message of the New Testament: Promises Kept in 2005 and 2006 (Crossway) and these helpful books populate the shelves of many a pastor. Given this, why did Dever need to publish What Does God Want of Us Anyway? A Quick Overview of the Bible? Well, if Dever’s first two volumes were snapshots taken from a commercial airliner, his “Overview” is a snapshot taken from a satellite. I have to be honest, I was a little skeptical picking up this book. What could be covered in 122 miniature pages? What did Dever have to say he hadn’t already said in his first two volumes?

But, in my estimation, Dever proves himself to be more than equal the task of this focused project. The major difference of this project is that Dever writes this book as much to entice one to read the Bible as he does to explain the Bible. The first chapter alone, a mere four and a half pages is a chapter I’d recommend any Christian sit down with an open minded non-Christian friend to sit down and talk about. In that chapter, Dever reflects on the litany of views famous historical people have had to the Bible and what Americans in general think about the Bible and how their thinking lines up with their practice (hint: their thoughts are more kind to it than their reading habits). At the end of this chapter Dever gives what will be the thrust to this book. The Bible “tells one great story. As Martin Luther said, ‘The Bible is alive, it speaks to me; it has feet, it runs after me; it has hands, it lays hold of me.’ I pray that happens to you” (20-21). 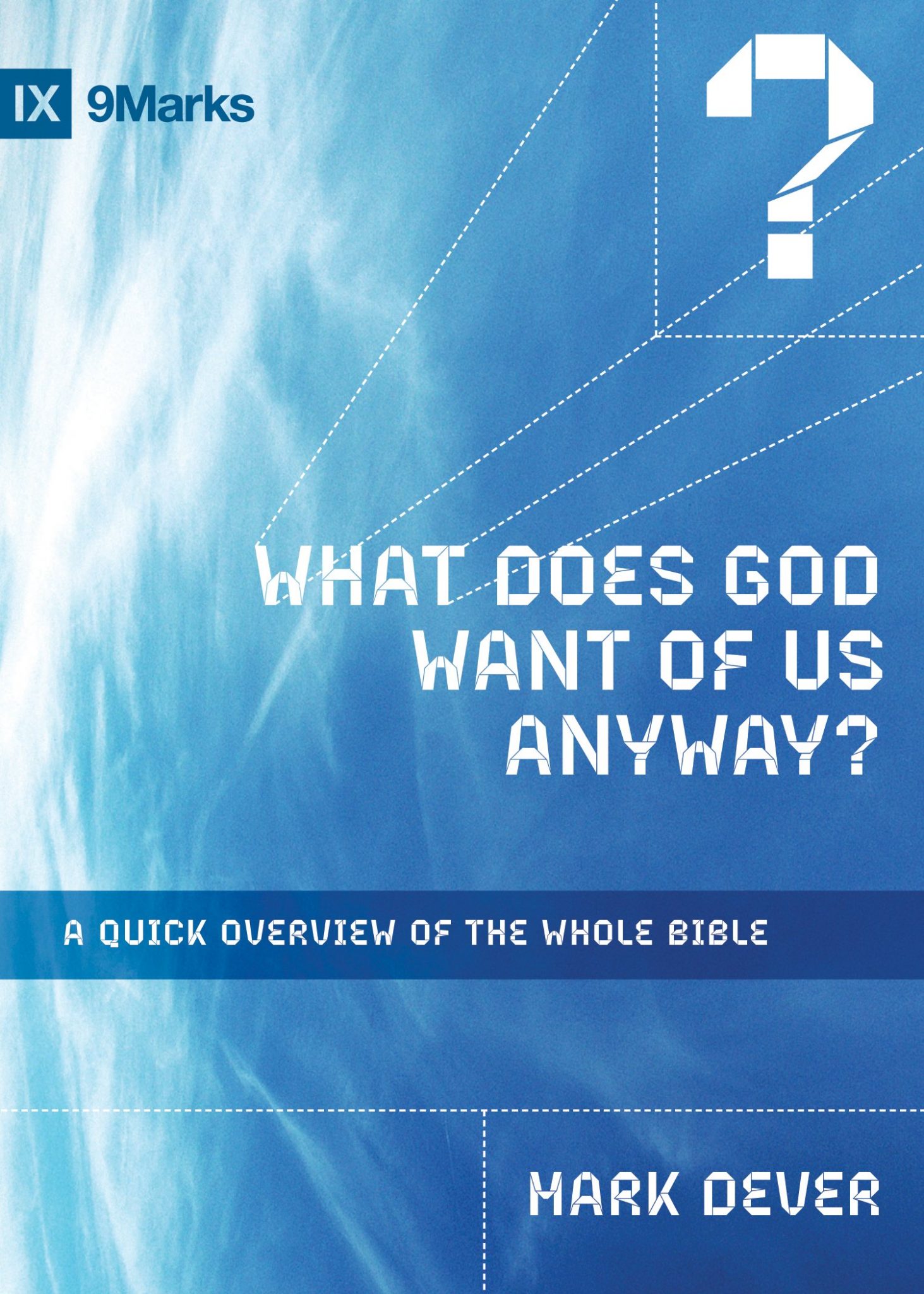 What Does God Want of Us Anyway? A Quick Overview of the Whole Bible

What Does God Want of Us Anyway? A Quick Overview of the Whole Bible

Originally delivered as sermons by pastor Mark Dever at Capitol Hill Baptist Church in Washington DC, these three studies are now available in one hardcover volume. Dever guides readers to take a step back and look at the Bible from a broader perspective. As we notice new features of an object when viewed from a distance, so too the major themes of Scripture become more apparent when we take in the Bible as a whole. Part of the IXMarks series, this book considers the central messages of the Bible as seen in the promises of God.

In the rest of the book Dever sets up the biblical themes of holiness, hope, the redeemer, a new relationship, and the new covenant and then examines the Old and New Testaments from the perspective of these themes. Dever never breaks stride and never loses focus of his target audience. The book keeps a brisk pace and adeptly teaches the reader basic biblical redemptive categories all the while whetting his appetite for the Word itself.

Read this book. If you’ve been a Christian for years and the Bible is like an old gym shirt—”worn in and comfortable”—you need this book to reinvigorate you and bring you back to the core themes of Scripture. If you’re a brand new Christian use this book as a very simple guide to help provide you a roadmap of the most important book you’ll never grow too old or too mature for. If you have friends who are interested in Christianity, read this book with them. It will pique their interest and hopefully cause them to assume less and be challenged to pick up for themselves Book that God has given to his people.

John Beeson serves as co-lead pastor at New Life Bible Fellowship in Tucson, Arizona. He attended Gordon College and Princeton Theological Seminary, and is married with two kids. He blogs at The Bee Hive.