Bart Ehrman has done it again. He’s written a provocative and substantive book that addresses a significant topic: the divinity of Jesus (read my review here). Ehrman, professor of religious studies at the University of North Carolina, sketches a trajectory in which the early Christians’ thinking about Jesus’ status evolved from Jesus being “not . . . God in any sense at all” to him being “divine . . . in some sense” to him being “equal with God Almighty in an absolute sense” (44). While Ehrman’s model is certainly neat and tidy, is it historically accurate?

He also posits a series of rather doubtful, and in some cases downright eccentric, propositions. For example:

That’s quite a list of assertions—some repeating old theories, others more innovative. Anyone who’d critique such a slew of assertions is in for a tough challenge. Who is up to such a task?

The five-scholar team of Michael Bird, Craig Evans, Simon Gathercole, Charles Hill, and Chris Tilling is. Though five against one may not be fair, it’s effective, enabling each scholar to critique a given set of assertions in his area of primary expertise in How God Became Jesus: The Real Origins of Belief in Jesus’ Divine Nature. A Response to Bart D. Ehrman. Contra Ehrman, these authors demonstrate the Gospels are reliable and coherent historical sources; that Ehrman misrepresents Roman policy regarding crucifixion and non-burial; that he mischaracterizes Matthew and Luke when arguing they know nothing of Jesus’ pre-existence; that his schema of competing and evolving exaltation and incarnation Christologies is contrived, misleading, and historically implausible; and that his charge of contradictory Christologies in early Christian writings is itself contradicted by the biblical evidence. Contrary to Ehrman, Jesus was not a mere man who became “God” only later by being elevated to divine status by his followers; rather, God took on humanity in the person of Jesus of Nazareth. Within a decade or two, the earliest Christians understood that Jesus’ identity was intrinsic to Israel’s God and that he wasn’t a second or lesser deity, but rather part of God’s own being and therefore worthy of worship. [1]

Bird starts out by summarizing the scholarship of the “Early High Christology Club,” comprising Martin Hengel, Richard Bauckham, and Larry Hurtado. [2] While diverse, these writers agree Christianity didn’t elevate Jesus to divine status as a result of interface with pagan sources but that early confessions of Jesus as divine were inspired by reflections on passages like Psalm 2 and 110. Worship of Jesus began immediately rather than growing incrementally. Second Temple intermediary figures fall short as precedents to the exaltation of Jesus to divine status because, as created beings, these were acknowledged to be distinct from God or to represent personifications of God (e.g., Wisdom). While these scholars aren’t an infallible triumvirate, their body of scholarship suggests belief in Jesus’ divinity was early and later formulations weren’t “wildly innovative” (16). Bird also takes up Ehrman’s claim that “Son of Man” didn’t refer to Jesus but instead to a separate apocalyptic ruler. The expression actually reflects Semitic parlance, normally constituting a self-reference when used in a definite sense. Jesus also understood himself as the figure of Daniel 7:13–14 who combined human and divine traits and would be enthroned beside God, being God himself. [3]

Evans, in a brilliant treatment, demonstrates that Roman law permitted the burial of the executed, including the crucified. He also cites compelling archaeological and literary evidence that first-century Jews buried all dead—including the crucified—before nightfall and that the Romans respected this custom. It’s highly probable, Evans concludes, that Jesus’ body was buried in a known tomb and that the risen Jesus appeared to his followers, prompting them to speak of his resurrection. 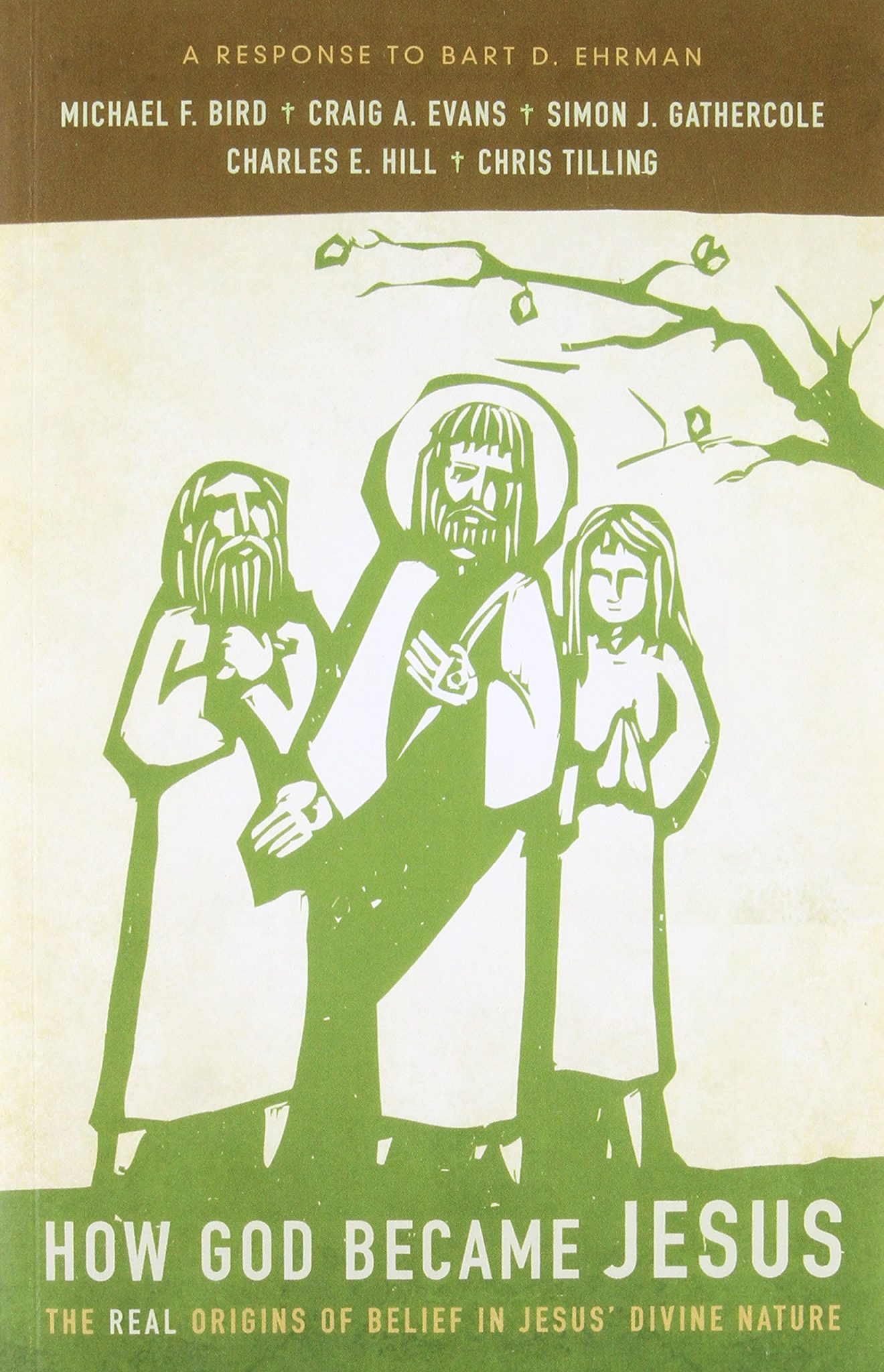 How God Became Jesus: The Real Origins of Belief in Jesus’ Divine Nature. A Response to Bart D. Ehrman

How God Became Jesus: The Real Origins of Belief in Jesus’ Divine Nature. A Response to Bart D. Ehrman

Gathercole shows that, contrary to Ehrman’s claims, the Synoptics convey a strong sense of Jesus’ divine identity and pre-existence. This is evident particularly in the “I have come” sayings that imply Jesus’ journey to earth from the heavenly realm, sayings parallel not to Old Testament prophetic call narratives but to accounts of angelic visitations. [4] Passages such as Acts 2:36 and Romans 1:4 don’t suggest Jesus was elevated to something he hadn’t been before but that following the resurrection he assumed roles appropriate for his divine status in the post-incarnation period. These changes in role pertain to Jesus’ relationship to the church and the world rather than to the Father.

Tilling follows with a trenchant critique of Ehrman’s model positing subsequent exaltation and incarnational Christologies. He shows this construal to be not only artificial but also largely unsupported by the data. Tilling also takes a closer look at Ehrman’s exegesis and demonstrates it’s unduly selective, [5] often unaware of a broader range of scholarship, and failing to penetrate to the deeper issues at hand. While Ehrman’s work is mostly popular in nature, these shortcomings prove detrimental to his entire project, since his cumulative case is only as valid as the quality of his exegesis of individual passages.

Hill discusses Ehrman’s presentation of Christological “dead ends” (adoptionism, Docetism, Gnosticism) and “hetero-orthodoxies” (ultimately rejected views affirming both the humanity and divinity of Jesus). Hill demonstrates that Ehrman’s account of individual figures or movements is dubious and that orthodoxy isn’t the product of alleged “heresy hunters” rewriting history. He also scrutinizes Ehrman’s proposal of “ortho-paradoxes” (related to the simultaneous affirmation of Jesus’ divinity and humanity), which Hill shows largely result from the projection of a set of presuppositions onto the biblical documents rather than from the fruit of responsible research. Moreover, Hill takes up Ehrman’s ugly charge that belief in the deity of Jesus motivated anti-Semitism. Without denying the horrid history of Christian anti-Judaism, Hill shows the sources don’t bear out Ehrman’s contention.

All in all, the assessment of Ehrman’s work by this formidable phalanx of scholars is rather sobering. [6] On a historical level, his arguments are refuted time and again, supported by compelling evidence. [7] This carefully coordinated critique meets Ehrman, who presents himself first and foremost as a historian, at his own perceived area of greatest strength. On a theological level, Ehrman’s way of connecting the dots is exposed as a contrived exercise that has a degree of surface plausibility but evaporates upon closer historical scrutiny and a more balanced and comprehensive reading of all the relevant texts.

While probably no single volume can adequately refute all of Ehrman’s myriad contentions in his growing popular corpus (or even in this one book), Bird and company give it a valid try and on the whole succeed admirably. [8] They are to be commended for putting in place an alternative account of belief in Jesus’ divinity rather than merely poking holes in Ehrman’s reconstruction. Even so, this isn’t likely the last we’ve heard from Ehrman, and it remains to be seen where his journey will take him next. Nevertheless, the substance of this critique makes one wonder if Ehrman’s claim to evenhandedness—not just his actual contentions—should be taken with a grain of salt.

[1] The authors draw here on Richard Bauckham and Larry Hurtado, both of whom wrote endorsements for the book.

[2] Ehrman refers twice each to Hengel and Hurtado but completely ignores Bauckham’s work, a massive omission that casts major aspersions on Ehrman’s claim to be fair and balanced.

[3] Bird rightly cites Mark 14:61–62 as a poignant example combining both points. Note that Ehrman fails to interact with important studies such as Darrell L. Bock’s Blasphemy and Exaltation in Judaism and the Final Examination of Jesus. Readers are regularly given only Ehrman’s side of the issue. What’s more, Ehrman’s is an entirely reconstructed position that no text actually supports and that can be upheld only by a selective reading of the sources.

[4] Ehrman doesn’t reference Gathercole’s significant monograph on the subject, The Preexistent Son: Recovering the Christologies of Matthew, Mark, and Luke.

[6] Certainly anyone browsing the endnotes in these two volumes will be impressed with the range of scholarly interaction in the present book, which exceeds the scope of Ehrman’s range considerably.

[7] My favorite is Evans’s chapter, which offers a compelling refutation of Ehrman’s claim that Jesus was never buried. Hill’s critique of Ehrman’s novel proposal of “ortho-paradoxes” is a close second.

[8] There’s some inevitable overlap; for example, critiques of Ehrman’s from-exaltation-to-incarnation-Christology schema pop up in multiple essays. On the other hand, it may have been helpful for the authors to devote more focused attention to Ehrman’s hallucination theory, which is fairly central to his argument. For an attempt to critique the entirety of Ehrman’s work, including its underlying skeptical bias, see the popular-level work by Köstenberger, Bock, and Chatraw, Truth Matters (B&H, 2014); and the academic equivalent, Truth in a Culture of Doubt (B&H, forthcoming September 2014).

Andreas Köstenberger has recently accepted the position of research professor of New Testament and biblical theology and director of the Center for Biblical Studies at Midwestern Baptist Theological Seminary in Kansas City, Missouri. He is the founder of Biblical Foundations™ and the author of God, Marriage, and Family.