“Jesus was a lower-class Jewish preacher from the backwaters of rural Galilee who was condemned for illegal activities and crucified for crimes against the state. Yet not long after his death, his followers were claiming that he was a divine being. Eventually, they went even further, declaring that he was none other than God, Lord of heaven and earth. And so the question: How did a crucified peasant come to be thought of as the Lord who created all things? How did Jesus become God?” (1).

This is how Bart Ehrman, professor of religious studies at the University of North Carolina, frames the question in his latest attempt at deconstructing the Christian faith in his popularly written, often lopsided, [1] and at places eccentric book How Jesus Became God: The Exaltation of a Jewish Preacher from Galilee. While Jesus was a Jewish preacher from Galilee who was crucified for political reasons (though surely also for religious ones) and whose followers claimed was divine shortly after his death, Ehrman’s portrait neglects Jesus’ miracles, his messianic claims, [2] and his followers’ confessions of him as Messiah and even God during his public ministry and immediately following his resurrection (e.g., Matt. 28:17; Luke 24:52; John 20:28). Right from the start, one gets the impression Ehrman’s Jesus is a truncated version construed by a historical-critical scholar—and an unduly skeptical one at that. This isn’t only Ehrman the historian; it’s also Ehrman the ex-believer and notorious skeptic. [3]

From beginning to end Ehrman dichotomizes between faith and reason, history and theology, the historical Jesus and the Christ of faith. [4] With such premises in place, the outcome of his historical research is predictable: Jesus never claimed to be God; he viewed himself as an apocalyptic prophet (echoes of Albert Schweitzer); and his followers never considered him to be God either. In customary fashion, Ehrman assigns the emergence of the notion of Jesus’ divinity to the latest possible date. He asserts ancient people frequently thought of a particular human as a god or of a god having become human, so there’s nothing unique about Christians’ claim that Jesus was divine. [5] 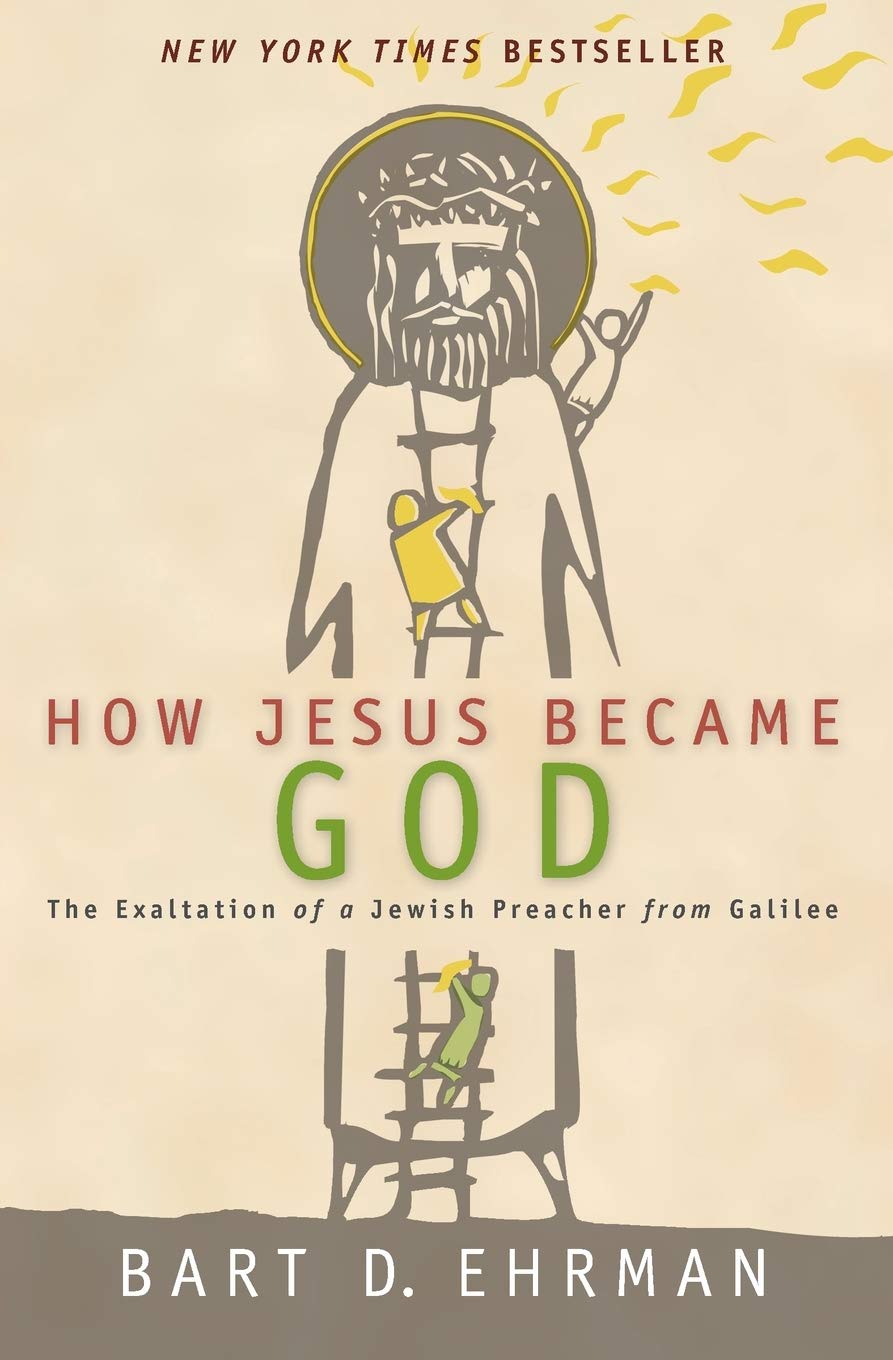 How Jesus Became God: The Exaltation of a Jewish Preacher from Galilee

How Jesus Became God: The Exaltation of a Jewish Preacher from Galilee

The claim at the heart of the Christian faith is that Jesus of Nazareth was, and is, God. But this is not what the original disciples believed during Jesus’s lifetime—and it is not what Jesus claimed about himself. How Jesus Became God tells the story of an idea that shaped Christianity, and of the evolution of a belief that looked very different in the fourth century than it did in the first.

Written for secular historians of religion and believers alike, How Jesus Became God will engage anyone interested in the historical developments that led to the affirmation at the heart of Christianity: Jesus was, and is, God.

As is also customary for Ehrman, he paints a rather monolithic portrait of scholarship on the issue. There are sober-minded, realistic historians—that is, “the majority of critical scholars”—who for “more than a century” have maintained Jesus was an apocalyptic prophet and didn’t even claim to be divine (6). Then there are others who are naïve and uncritical, if not unreasonable, refusing to follow the lead of the self-proclaimed critical scholarly elite and thus condemning themselves to unenlightened historical-critical darkness and ignorance. Tertium quid non datur.

A bombshell explodes when Ehrman admits he no longer believes Jesus was actually buried or that the tomb was empty. He claims, notwithstanding the unanimous testimony of all four Gospels and Paul, [6] that “Christian storytellers” had a compelling reason to fabricate Jesus’ burial: “If Jesus had not been buried, his tomb could not be declared empty” (160). Pilate, he says, was not a “beneficent prefect who kindly listened to the protests of the people he governed” (163) and was therefore unlikely to grant the request to release Jesus’ body. Ehrman also claims the resurrection narratives are replete with contradictions. [7]

What we do know, Ehrman says, is that many of Jesus’ followers (Peter, Paul, and Mary, among others) had visions of him still alive, perhaps out of bereavement. Belief in those visions (not the historically resurrected Jesus) then led them to posit Jesus’ exaltation—the first exaltation Christologies. However, there was no precedent for belief in a resurrected Messiah, as first-century Jews did not anticipate a suffering Messiah (and a God who doesn’t die needs no resurrection). Later on, Ehrman alleges, an alternative view was posited that Jesus pre-existed as divine and became human (incarnation Christologies). In so doing, Ehrman posits a radical discontinuity between the Synoptics and John (270). He also claims Jesus didn’t exist prior to the incarnation; only the Logos did (274).

Later still, Christians espoused views eventually declared heretical (e.g., Jesus was fully human but not divine; he was fully divine but not human; he was two beings, divine and human, united temporarily during his earthly ministry). Finally, the fourth-century AD Arian heresy claimed Jesus was God but not on the same level as the Father (subordinationist Christology).

Essentially, Ehrman sketches a trajectory during the course of which the prevailing Christology evolved from “no God” (Jesus, his first followers) to “exaltation” (based on belief in visions; Mark) to “incarnation” (John) to the more sophisticated Christological formulations of the early councils and creeds. In other words, as Ehrman puts it, from “not . . . God in any sense at all” to “divine . . . in some sense” to “equal with God Almighty in an absolute sense” (44). The model is simple, but is it the most plausible way to characterize what happened?

A review like this cannot exhaustively critique the many details contained in How Jesus Became God. Fortunately, an international five-scholar team has just published an excellent, full-fledged response. [8] This phalanx relativizes Ehrman’s claim that he speaks for the majority of serious scholars. They contend, contra Ehrman, that the Gospels are reliable and coherent sources; that Ehrman misrepresents Roman policy relating to crucifixion and non-burial; that he mischaracterizes Matthew and Luke when he argues they know nothing of Jesus’ pre-existence; that his schema of competing or evolving exaltation and incarnation Christologies is contrived; and that his charge of contradictory Christologies (“ortho-paradoxes”) in early Christian writings is implausible.

Jesus was not a mere man who only later became God; rather, God took on humanity in the person of Jesus of Nazareth. Within a short decade or two, the early Christians understood Jesus’ identity was intrinsic to the identity of Israel’s God and that he wasn’t a second or lesser god but instead part of God’s own being and identity and thus a fitting object of worship. Also, the types of Christology Ehrman discounts as contradictory are found side by side, even intertwined, in individual New Testament books like John and Colossians. Apparently, these biblical authors held both views simultaneously without considering them contradictory. This evidence calls into question Ehrman’s trajectory from exaltation to incarnation Christologies, then, as many New Testament authors would have to be internally conflicted for his thesis to be correct.

In the end, Ehrman’s latest book continues his application of a skeptical mindset to God (God’s Problem), the Bible (Jesus, Interrupted; Lost Scriptures), Jesus (How Jesus Became God), and early Christianity (Lost Christianities). [9] But he fails to consider Christianity’s credible claim to be in an important sense unlike all other religions and yet historically grounded at the same time. Once one is open to the historical uniqueness of Jesus and early Christianity, one can appreciate that the preponderance of historically credible evidence lines up differently than Ehrman asserts.

The rapid rise of Christianity and the fact that large numbers of believers were prepared to die for their faith are best explained by the historical reality of Jesus’ resurrection, not faith in hallucinatory visions. This is true especially when one considers there was no Jewish precedent to arrive at these conclusions apart from a genuine impetus. The short interval between the crucifixion of Jesus and documented worship of him as God is best explained by his own divine claims prior to his violent death. And the testimony to his resurrection by hundreds of eyewitnesses still alive at the time of the New Testament’s writing is best understood not by hallucinations, non-burial, or a stolen body, but by a historical resurrection.

Contra Ehrman, this isn’t solely a matter of religious faith; it’s also borne out by the best historical evidence interpreted by scholars using a method that’s critical (i.e., open to all the available evidence) but not excessively skeptical. In the end, How Jesus Became God speaks more to Ehrman’s own continuing quest of faith (or lack thereof) than it reveals about the historical Jesus, early Christianity, and the many other vital entailments of the Christian faith it sets out to address.

[1] I say “popular” because Ehrman’s book straddles the fence between being scholarly and popular. It’s written in an anecdotal style with frequent flashbacks to his life prior to his conversion to historical-critical scholarship. I say “lopsided” because, to give but one telling example, chapter 3 (“Did Jesus Think He Was God?”) has 12 footnotes: six (or seven) referring to Ehrman’s own work, two stating his own opinion with no scholarly backup, and only four (or five; one refers to a work by Ehrman and one by another scholar) referring to the work of others, virtually all of them Ehrman’s “friends,” as he frequently calls them. Non-members of the historical-critical establishment are routinely ignored.

[4] E.g., pp. 132–33. Note the challenge to this approach to Jesus/Christ by a host of historical Jesus scholars in Darrell Bock and Robert Webb, eds., Key Events in the Life of the Historical Jesus (Eerdmans, 2010).

[5] He also lodges the dubious claims that Isaiah’s monotheism “represents the minority view in the Hebrew Bible” (53) and that “Son of Man” was not a self-reference of Jesus (106–07).

[6] E.g., 1 Corinthians 15:4. Note that Paul, once an Ehrman-like skeptic, was convinced otherwise according to his own testimony (Acts 9).

[7] But see on this Andreas Köstenberger and Justin Taylor, The Final Days of Jesus (Crossway, 2014).