In the last decade the church has witnessed a resurgence of scholarly and pastoral wrestling with the genre and historicity of Genesis 1–11. In this provocative addition to Zondervan’s “Counterpoints” series, seasoned Old Testament scholars James Hoffmeier (= history), Kenton Sparks (= fiction), and Gordon Wenham (= neither) cordially debate these issues, with editor and theology professor Charles Halton (= fiction?) providing introductory and concluding comments.

While this volume will best help seminary students and pastors grapple with the issues, every Christian who savors salvation from God’s wrath and who affirms the necessity of the historical, bodily resurrection of the last Adam (1 Cor. 15:14, 17) should consider how important the factuality of Scripture’s earliest chapters is.

A professor at Trinity Evangelical Divinity School known for his expertise in ancient Egyptian history and its intersection with the Bible, Hoffmeier argues that Genesis 1–11 is an accurate family history that conveys theology (23–58). He follows Wenham in translating the book’s tenfold toledot formula “this is the family history of X,” and rightly notes how the repetition of the formula both unifies the book of Genesis and calls us to read all the narratives—including those in Genesis 1–11—as “dealing with real events involving historical figures” (32; cf. 58).

Hoffmeier rightly stresses the need to give highest authority to biblical revelation (140, 142), and he draws attention to the doctrine of Christ’s bodily resurrection as essential even though the world mocks it as foolish (142; cf. Acts 17:32; 1 Cor. 1:23).

Wenham, a tutor at Trinity College in England and author of a masterful exegetical commentary on Genesis, argues that Genesis 1–11 is “protohistory” (73–97). By this he means that these chapters are neither impartial history nor imaginative fiction but address origins, illustrate important social and theological principles, and set paradigms for our later understanding of reality (85, 87; cf. 82, 84). He believes Genesis is an “expanded genealogy” that demonstrates “careful organization . . . with a didactic purpose” (76, 78); the events “may not be datable and fixable chronologically, but they were viewed as real events” (85).

Hoffmeier and I agree with much of what Wenham articulates, but it’s still difficult to know where he stands on Genesis’ historicity. He never makes clear whether and to what extent he believes the biblical authors were correct in their perspectives, nor does he distinguish those elements that represent actual history. He emphasizes that the final-form message is what matters most in interpretation (61, 74, 95), but he fails to acknowledge how important the questions of historicity are for substantiating the claims of the theological message. 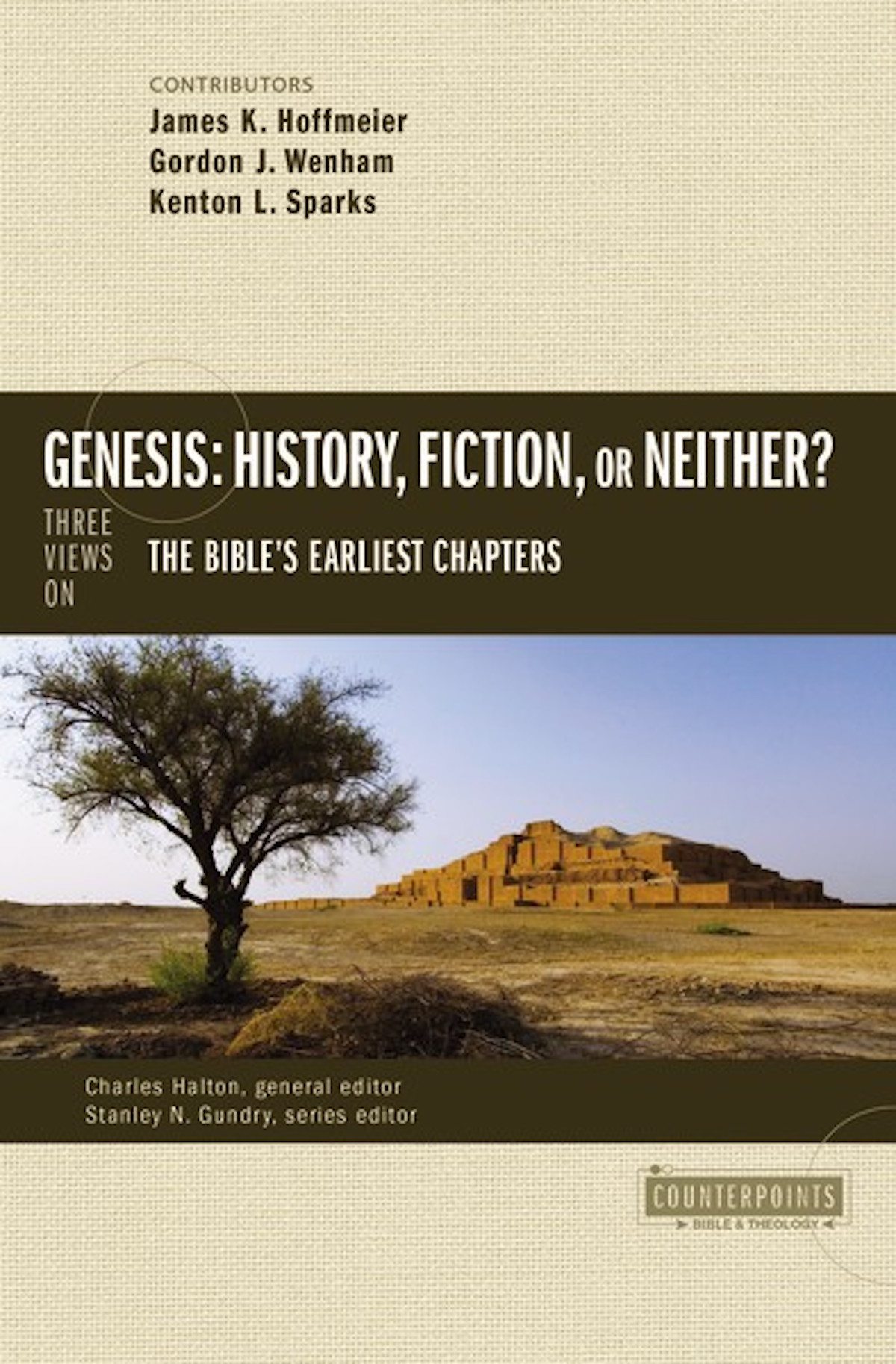 Genesis: History, Fiction, or Neither? Three Views on the Bible's Earliest Chapter

Genesis: History, Fiction, or Neither? Three Views on the Bible's Earliest Chapter

Sparks teaches at Eastern University in St. Davids, Pennsylvania, and scholars appreciate him for his synthesis of ancient extrabiblical texts. Among conservative evangelicals, however, he is known for his open assault against the classic doctrine of biblical inerrancy. Sparks identifies Genesis 1–11 as “ancient historiography” (110–39) but stresses that, while the biblical authors at times “sought (more or less) to narrate history” (72; cf. 138–39), the early chapters of Genesis “do not narrate closely what actually happened. . . . There was no Edenic garden, nor trees of life and knowledge, nor a serpent that spoke, nor a worldwide flood in which all living things, save those on a giant boat, were killed by God” (109, 111). He prefers to tag the various parts of Genesis 1–11 “myth, legend, and tale” (109, cf. 122, 130, 131), all of which are “fiction” and exclude “accurate historical results (because created stories cannot map closely to historical events)” (64 n. 162).

Sparks says that the contemporary “scientific evidence (biological, geological, anthropological, linguistic) makes clear that, in the end, most of Genesis 1–11 cannot be accurate history” (72). Intriguingly, however, Sparks is apparently not as sure about science’s results as he would lead us to believe, for he passingly remarks that “we will look as confused in a thousand years as [the biblical authors] do now” (139). With science providing such an uncertain foundation, we should be cautious to follow Sparks in shifting our primary authority away from the unchanging Word of God.

Ironically, based on Luke’s marked intent to represent history rightly (Luke 1:1–4), Sparks insists that the Gospel account of Jesus’s bodily resurrection provides a historically accurate description of what happened (114). Nevertheless, even though he believes the authors of Genesis 1–11 often accepted their accounts as real history, he thinks modern science proves they got their facts wrong (72, 138–39). Both Sparks and Halton compare the Bible’s earliest chapters to Jesus’s parables and not historical narrative (114; 156 n. 1). However, if we affirm Luke’s account of Jesus’s bodily resurrection, must we not also affirm his Gospel’s other stated historical (and not parabolic) assertions that Jesus’s genealogy goes back to a historic “Adam, the son of God” (Luke 3:38) and that the ease of Jesus’s generation was like the historical unreadiness of Noah’s generation for judgment (Luke 17:26–27)?

Hermeneutical consistency doesn’t allow one to affirm the bodily resurrection of Christ and yet deny other statements the Old and New Testament’s authors intended as historical fact. Sparks’s reading Genesis 1–11 as fiction lessens the trustworthiness of Jesus and his apostles’ words and shrinks the cloud of witnesses in Hebrews 11, for “Abel, Enoch, and Noah never existed!” (as Hoffmeier notes, 149).

Plea for Unity Around Scripture’s Jesus

Meir Sternberg once noted that when interpreters view the Bible’s historical narratives as fiction, they change YHWH from “the Lord of history into a creature of imagination, with the most disastrous results” (The Poetics of Biblical Narrative, 32). I see dangers for the church in Sparks’s and Halton’s views.

Halton appears to affirm Sparks’s approach, concluding the book by calling believers to “take care to not let these issues become impediments to Christian unity” (159). He recognizes the need to “share in common a few bedrock ideas (such as, who is Jesus?)” (162), but he urges that doctrine shouldn’t divide (161).

Certainly there are some doctrines over which faithful Christians can disagree, but there are others all must embrace to be truly Christian. Among these latter doctrines is the good news that through Jesus––the divine, crucified, and resurrected Messiah––God reigns over all and that he saves and satisfies believing sinners (1 Cor. 15:3; cf. Matt. 23:23). Yet our very understanding of this Jesus grows out of the Bible’s portrait, and the more we deny the historical grounding of this representation the more in danger we are of replacing the church’s foundation with human imagination, leaving the world without a historical sovereign, Savior, and satisfier.

We must ask: is the Jesus we affirm the one who claimed that not simply the ideas but the very letters and words of Scripture matter and point to him (Matt. 5:18)? Is he the Jesus who was the word made flesh (John 1:14), who was “in the beginning with God” and through whom “all things were made” (John 1:2–3)? Is he the Jesus whose human lineage stretches back to Adam (Luke 3:38), and who affirmed the historic reality both of God’s creating male and female in the beginning as a paradigm for marriage (Matt. 19:4) and of the global rebellion in the days of Noah (Luke 17:26–27)? Is he the Jesus who declared Scripture “cannot be broken” (John 10:35) and whom Paul insisted answers the sin problem produced by a historical Adam (Rom. 5:12–19; 2 Cor. 15:22, 45)? If our unity does not center on this Jesus, then we are in peril of losing the historic grounding of our faith.

Paul stressed that unity must be around the foundational truths and not separate from them:

I appeal to you, brothers, to watch out for those who cause divisions and create obstacles contrary to the doctrine that you have been taught; avoid them. For such persons do not serve our Lord Christ, but their own appetites and by smooth talk and flattery they deceive the hearts of the naïve. (Rom. 16:17–18)

Elsewhere the apostle called for unity “in the same mind and judgment” (1 Cor. 1:10; cf. 11:19). There is no true Christian unity apart from common surrender to the historic Jesus of Scripture. Yet this Jesus is the one who affirmed the historicity of Genesis 1–11, who died a substitutionary death to overcome the sin and wrath problem historically introduced by Adam, and who himself was genealogically connected to the first man, Adam, the son of God.

Editors’ note: For DeRouchie’s extended review of this volume, see the forthcoming issue of Themelios, 40.3.

Jason S. DeRouchie (PhD, The Southern Baptist Theological Seminary) serves as research professor of Old Testament and biblical theology at Midwestern Baptist Theological Seminary in Kansas City, Missouri. He is the contributing editor of What the Old Testament Authors Really Cared About: A Survey of Jesus’ Bible (Grand Rapids: Kregel, 2013) and author of How to Understand and Apply the Old Testament: Twelve Steps from Exegesis to Theology (P&R, 2017). His resource website is jasonderouchie.com.