That’s why Wayne Grudem’s new book, “Free Grace” Theology: Five Ways It Diminishes the Gospel, is relevant for you. It’s relevant even if you’ve never heard of the “Lordship salvation” controversy. And it’s relevant because it deals with an issue at the heart of the gospel: the nature of saving faith.

How does saving faith relate to repentance? Does it always produce good works? Should we ever doubt our faith is genuine? And what does it mean to say we’re justified by faith alone? These are the sorts of vital questions Grudem tackles in this book.

In case you were worried, Grudem—author of numerous books including the widely read Systematic Theology—hasn’t suddenly turned against the doctrine of free grace. Look closely at the book’s title. The phrase “Free Grace” Theology (note the quotation marks) refers to a specific set of teachings that originated in the late 20th century among a minority of professors at Dallas Theological Seminary, foremost of whom was the late Zane Hodges. It is currently promoted by organizations like Free Grace Alliance and Grace Evangelical Society (23), and by theologians like Charles Bing, Robert Wilken, Fred Lybrand, and Joseph Dillow.

The distinguishing mark of Free Grace Theology (FGT) is its understanding of what it means to be justified by faith alone. For Grudem, this is also its distinguishing error:

The mistakes of the Free Grace movement today all stem from a misunderstanding of the way the word alone is used in the expression “justification by faith alone.” (139; cf. 36–37) 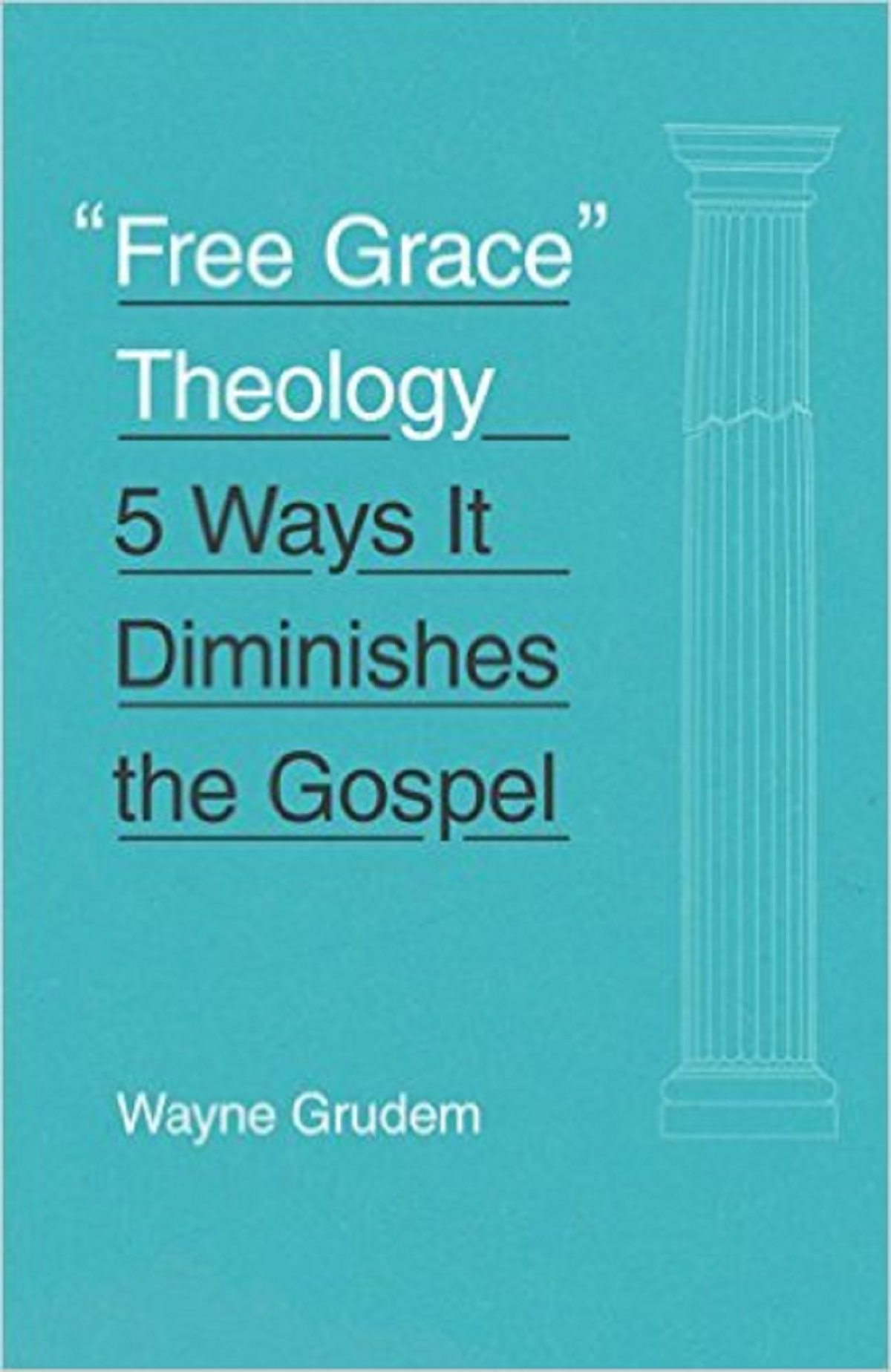 Grudem’s central argument is that the FGT understanding of “faith alone” is directly at odds with the New Testament’s, and that the difference turns on two questions: (1) Is repentance from sin (in the sense of remorse for sin and an internal resolve to forsake it) necessary for saving faith and (2) Do good works and continuing to believe necessarily follow from saving faith? (22).

FGT answers no to both questions, whereas Grudem argues (successfully, in my judgment) that both the Bible and classic Protestantism answer yes. Herein lies the substance of the book.

What Are the Five Ways?

Each of the five ways FGT diminishes the gospel gets its own chapter, so the book lays out neatly in five chapters along with an introduction and conclusion.

First, FGT doesn’t accurately reflect the Reformation teaching of justification by faith alone, which was often summarized in the formula “We are justified by faith alone, but the faith that justifies is never alone” (26). Translation: even though faith is the only human act God responds to in justification (it’s alone in that sense), faith never exists alone in the believer since it always brings with it certain other graces. Grudem’s survey of Protestant confessions spanning five centuries amply demonstrates that this formula represents the pan-Protestant understanding of faith alone (26–30). That this formula stands squarely at odds with FGT teaching is confirmed by the fact some openly reject the formula as an illogical cliché (34–35).

Second, FGT teaching weakens the gospel by “avoiding any call to unbelievers to repent of their sins” (39). Grudem helpfully shows how repentance appears in key New Testament summaries of the gospel message, even in places where faith isn’t explicitly mentioned (Luke 24:47; Acts 2:38). Additionally, passages like Acts 20:21 tie repentance and faith closely together (42), justifying the classical Protestant understanding that faith and repentance are like two sides of the same coin, or better—two perspectives on the same conversion event, with repentance being a turning from sin and faith being a turning to Christ. In short, we can’t preach the full gospel without preaching repentance. Even apart from its polemical purpose, this chapter provides a helpful overview of the biblical teaching on repentance.

We can’t preach the full gospel without preaching repentance.

Third, FGT weakens the gospel by giving many professing Christians a false assurance of salvation. It’s not hard to see why this would happen. If repentance, good works, and continuing in belief don’t necessarily follow saving faith, then the lack of them can’t serve as evidence that our faith is dead, and the answer to James’s question “Can that faith save him?” would seem to be “yes” (James 2:14–17).

Grudem is at his sharpest when examining FGT’s faulty thought processes on assurance. First, he argues their thinking rests on a category mistake:

Then he argues that FGT employs a kind of fallacious mathematical reasoning when it asks, “How many good works does one have to do in order to be assured of salvation?” (88), as though such things could be quantified. To which Grudem’s somewhat humorous but biblical answer is, “Some” (90).

Fourth, FGT “overemphasizes agreement with facts and underemphasizes heartfelt trust in the person of Christ” (97). Whereas classical Protestantism has seen faith as knowledge (notitia), assent (assensus), and trust (fiducia), FGT majors on the former two. Grudem parses FGT carefully, noting that while some like Hodges and Wilken define saving faith solely as intellectual assent to facts about Christ (98), others like Bing allow that faith includes trust in the person of Christ (99). But in the end, even the healthiest forms of FGT downplay this aspect of saving faith, and for an obvious reason:

The more we emphasize coming into the presence of Christ and trusting him, the more the idea of optional submission to his Lordship becomes unthinkable. (103–04)

Fifth, FGT is forced to rely on “numerous, highly unlikely interpretations of the NT” in order to defend their understanding of faith alone (118). Given the nature of the charge, this chapter unavoidably feels the most stinging. Examining the FGT interpretation of 11 “problem passages,” Grudem concludes that FGT advocates simply “have no idea how strained, how idiosyncratic . . . and how completely unpersuasive and foreign to the New Testament these interpretations sound,” both to laypersons and scholars outside the FGT camp (117–118). He suggests this is why almost all FGT books are published by their own organizations rather than by recognized evangelical academic publishers (135 n. 27). When a theology forces people to suggest that one can “receive” eternal life without “possessing” it, be “in” the kingdom without “inheriting” it, and enter the heavenly city without entering “by the gates” (134), it’s hard not to think something’s amiss.

Why ‘Diminish’ and Not ‘Destroy’?

Finally, a word about what’s at stake.

“Diminishing” the gospel is a serious charge—serious enough to warrant a book. But it’s not the same as “destroying” the gospel. And Grudem makes clear from the outset that he views this as an in-house debate among Christians, and for him a “difference . . . among friends” (16). He cites several FGT proponents whose correspondence helped him better understand their position, and whose presence I suspect also helped give the book its civil and charitable tone.

In closing, I must confess I was surprised this book still needed to be written. In one sense it engages the same battle John MacArthur fought 30 years ago in The Gospel According to Jesus and later in The Gospel According to the Apostles (though without the intramural dispensationalist arguments), and in my sheltered innocence I’d assumed this debate had been laid to rest. I was wrong. Zane Hodges may be gone, but his theology lives in on in the students he influenced. Grudem notes that many pastors all over the world wrote to him saying “I’m glad you’re writing about this” (20).

For their sake, I’m glad he did, too. But thankfully, that narrow audience won’t be the only beneficiaries. Anyone who loves the gospel and wants to preach it more faithfully can profit from this book.