Frederick Douglass placed a premium on education because he believed that reading gave freedom to enslaved men and women. A people who could read, he argued, were unfit to be slaves. David Blight, professor of American history at Yale, has provided an opportunity to read quite a bit about the 19th-century abolitionist and social reformer in his massive biography, Frederick Douglass: Prophet of Freedom.

New materials uncovered by historians and librarians make a new biography of Douglass not only useful, but in some ways also necessary to understand Douglass’s interactions with intellectual movements in the 19th century. Blight, more than any other biographer, places Douglass within the world of ideas he inhabited. By doing this, he shows Douglass to be a remarkable thinker, as well as a remarkable human.

Douglass’s childhood and adolescence in bondage, Blight argues, allowed him to understand not merely the civil and political oppression that accompanied chattel slavery, but also the massive psychological and sociological toll enslaved people endured. Douglass became particularly aware of the psychological isolation experienced by slaves. He had few friends on the Maryland plantation where he grew up, which may have been a coping mechanism he used to deal with the fact he almost certainly was fathered by a white man.

Blight pays particular attention to Douglass’s hatred of the economic aspects of slavery that transcended the ownership of bodies. Some slaveholders, particularly in urban areas and in the Upper South, allowed slaves to hire themselves out and keep a portion of the profits. When a master took all of what Douglass made, the latter’s fury turned his conception of freedom from one essentially concerned with freeing black bodies into a concern for black economic freedoms, too.

Blight notes that Douglass had some sort of religious conversion during his teenage years and believed in a personal and trinitarian Christian God. He also explicitly believed that sinners were reconciled to God through the person of Jesus Christ, and he had close relationships with African Methodist Episcopal pastors.

Blight also delves into less pleasant aspects of Douglass’s life. He often ignored his wife and children and stayed away from home for long periods of time.

Douglass eventually escaped from slavery and wrote about his experience in his magnificent first autobiography, A Narrative of the Life of Frederick Douglass. He dedicated his life to ending slavery. Making abolition and emancipation reality took more than goodwill. Douglass dropped the mantle of a strict reformist in order to find political allies in the Republican Party. Douglass wasn’t a partisan and didn’t seek political office, but he nonetheless saw politics as necessary to accomplish the goals of abolition and emancipation. He believed that the Republican Party was a flawed vessel—he chastised Abraham Lincoln and others for moving slowly on emancipation—but Republicans’ vision of the United States as a united cultural, economic, moral, and political nation shorn of chattel slavery convinced Douglass that Republicans deserved his support. 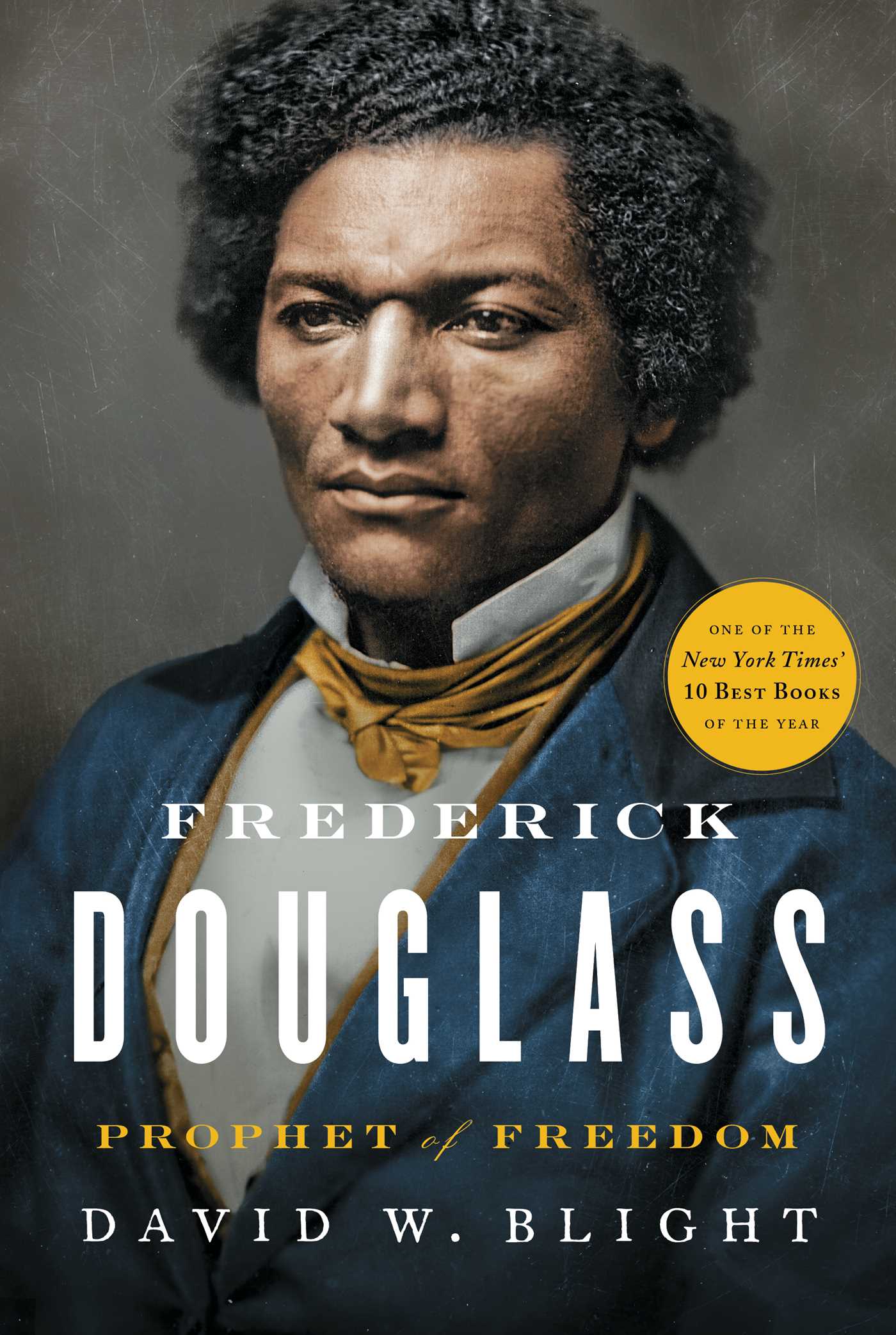 In this remarkable biography, David Blight has drawn on new information held in a private collection that few other historian have consulted, as well as recently discovered issues of Douglass’s newspapers. Blight tells the fascinating story of Douglass’s two marriages and his complex extended family. Douglass was not only an astonishing man of words, but also a thinker steeped in biblical story and theology. There has not been a major biography of Douglass in a quarter-century. David Blight’s Frederick Douglass affords this important American the distinguished biography he deserves.

His support of the Republican Party included support for the party’s increasingly romantic nationalism. Douglass sympathized with the notion that American culture, typified by the bourgeois society of the Free States, was superior to that of 19th-century Africa. When other black leaders tried to convince Douglass that immigration to Africa was the best safeguard for African liberties, Douglass, in Blight’s words, attacked the idea. He called West African rulers—whom he faulted in some degree with bringing slavery to North America—savages.

Put simply, Douglass believed that the United States provided real universal freedoms; those liberties were, however, hypocritically and wrongly withheld from black men and women. When Douglass gave his famous “What to the Slave Is the Fourth of July?” speech, he called on Americans to become a better version of themselves, not to become something entirely different. Douglass, it should be noted, remained thoroughly committed to liberal capitalism as a socioeconomic tool to potentially empower free black men and women. The statist measures he did support—and he supported quite a few—tended to be oriented toward dismantling Southern slaveholding agrarianism and creating black property-holding more than they were oriented toward dismantling liberalism or capitalism.

Douglass stayed focused on the issue of slavery even when other injustices were brought to his attention. When he toured the U.K. in the 1840s, champions of Ireland’s famine-struck poor encouraged Douglass to co-opt the struggles in Ireland against Great Britain into the broader battle for abolitionism. Douglass demurred. Slavery was a particular type of wrong that demanded particular types of reform. He didn’t entirely rule out violence to attain freedom for enslaved peoples, but he balked at physically or materially aiding John Brown’s proposed slave revolt at Harper’s Ferry, Virginia.

Blight calls Douglass a prophet, and like many prophets Douglass didn’t live to see the fulfillment of his goals. He didn’t see the enfranchisement of most African Americans in the aftermath of the civil-rights era. Likewise, the level at which African Americans can freely and justly participate in liberal capitalism is still debatable due to continuing disparities.

Douglass’s prophecies await complete fulfillment, but that shouldn’t cause us to dismiss their significance in bringing us thus far and inspiring us for what’s ahead.

Miles Smith is an assistant professor in the Department of Government, History, and Criminal Justice at Regent University.

2 4 Reasons Not to Move in with Your Partner

3 The Book Amazon Does Not Want You to Read

5 The FAQs: What You Should Know About the Pro-LGBTQ Equality Act

When and Where Did Sermons Originate?