We are all drawn to stories of redemption. For many Christians, Luke 15 and the Parable of the Prodigal Son is one of the most moving narratives in all of Scripture. Out of a Far Country: A Gay Son’s Journey to God. A Broken Mother’s Search for Hope is a true-life parable that reads like a modern rendition of the prodigal son, with the addition of a prodigal mother. Co-authors Christopher Yuan and Angela Yuan share their powerful stories in which they were both lost, both found redemption, and both found their ultimate identity in Christ.

Christopher and Angela Yuan’s mother-son narrative in Out of a Far Country is especially poignant because Christopher’s redemption includes his sexuality. Mother and son share their journey in real and raw language in alternating chapters.

Angela begins the narrative by honestly sharing the shame, disgrace, heartache, depression, and confusion she experienced when she learned her son was gay. Angela’s parental pain is something to which any parent of any prodigal facing any sin issue—not only same-sex attraction and sexual identify issues—can relate.

That’s the core message of the Out of a Far Country. Where do parents find hope for their parental hurts? Angela’s first option of choice is the option we all choose in the flesh—self-effort. As she puts it, “I would do anything to fix my son” (3).

Unable to fix her son, Angela lost all hope and planned to end her life. Then, in reading a booklet about God’s love for homosexuals, she realized that “God loves even me.” As Angela describes it, “I had not been seeking God, but I was found by him. Suddenly it seemed possible that my visit with Christopher—the visit that I had envisioned as one last goodbye—might actually be the beginning of something new” (19). 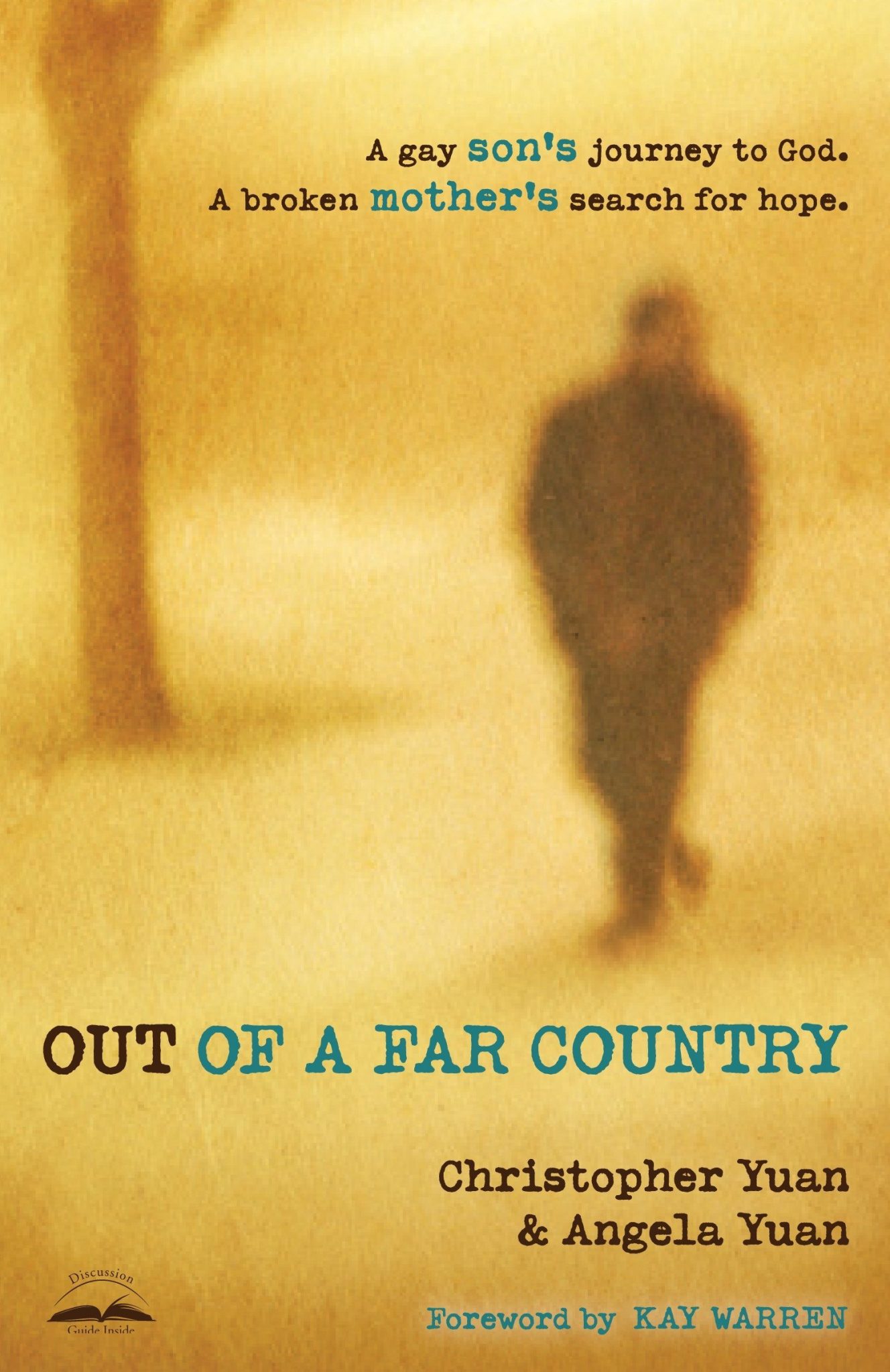 Out of a Far Country: A Gay Son's Journey to God. A Broken Mother's Search for Hope.

Out of a Far Country: A Gay Son's Journey to God. A Broken Mother's Search for Hope.

Christopher Yuan, the son of Chinese immigrants, discovered at an early age that he was different. He was attracted to other boys. As he grew into adulthood, his mother, Angela, hoped to control the situation. Instead, she found that her son and her life were spiraling out of control—and her own personal demons were determined to defeat her.

Years of heartbreak, confusion, and prayer followed before the Yuans found a place of complete surrender, which is God’s desire for all families. Their amazing story, told from the perspectives of both mother and son, offers hope for anyone affected by homosexuality.

This is the vital metaphor, the scarlet thread, woven throughout Out of a Far Country. In Christ, our core identity is not our sexual identity but our spiritual identity either as rebellious prodigals with our backs to God or as redeemed sons and daughters embraced by our forgiving Father.

Changed by Christ, Angela no longer focused on changing her son but on being “the extension of God’s love to Christopher” (89). For the parent of any prodigal struggling with any sin issue, Out of a Far Country models parental surrender to God as we release our adult children to God’s good hands and as we attempt to be a representative of Christ’s love to our children.

A Gay Son’s Journey to God

Christopher begins his narrative, which is not for the squeamish, with “Out of the Closet” (chapter two). Having told his parents he was gay and proud, he was kicked out. Now he felt free. Little did he know how bound he was and how bound he would become.

Finding acceptance in the gay community, Christopher felt, for the first time, like he had a family. Little did he know how quickly this “family” would desert him and how fervently his heavenly Father was pursuing him—inviting him into God’s eternal family.

Christopher’s tells his narrative as a journey with many hills and valleys—gay relationships, drug dealing, partying, rejection, arrest, emptiness, HIV. On the one hand, living the high life, on the other hand, experiencing the lowest of lows. As he pictures it:

Not even my friends wanted me. They wouldn’t even accept a collect call. I was nothing more than a reject, a throwaway. I took a deep breath and let out a sigh as my shoulders slumped and I dropped my head. I was about to turn toward my cell when something on top of the trash caught my eye. I bent over and picked up a Gideon’s New Testament (129).

Through a dizzying series of horrific events (arrest, incarceration, an AIDS diagnosis), Christopher hit rock bottom and then found himself clinging to the Rock of ages. Meditating on Jeremiah 29:12–14, he saw that “God could restore me and bring me back from captivity. . . .  He wanted to be a part of my life—no matter who I was or what I had done. . . . With God I had no record; I had no debt to be paid; I had no shameful past” (148).

In his speaking engagements and on his website, Christopher presents the gospel clearly. In Out of a Far Country, the gospel message is there in his life narrative. However, one might wish it had been presented with a little more clarity and detail.

Those expecting a full-blown theological treatise on homosexuality will be disappointed by Out of a Far Country. That is not the purpose of the book. However, in one chapter (chapter 30), Christopher does distill his understanding of homosexuality. Christopher’s approach is more narrative than didactic.

I turned to the Bible alone and went through every verse, every chapter, every page of Scripture looking for biblical justification for homosexuality. I couldn’t find any. I was at a turning point, and a decision had to be made. Either abandon God to live as a homosexual—by allowing my feelings and sexual passions to dictate who I was. Or abandon homosexuality—by liberating myself from my feelings—and live as a follower of Jesus Christ. My decision was obvious. I chose God (186).

Christopher began to ask the identity question that every person struggling with same-sex attraction must ask. “Who am I apart from my sexuality?” He concluded:

[M]y identity shouldn’t be defined by my sexuality. Paul said in Acts 17:28, “For in him we live and move and have our being.” Christ should be everything—my all in all. My sexual orientation didn’t have to be the core of who I was. My primary identity didn’t have to be defined by my feelings or sexual attractions. My identity was not “gay” or “homosexual,” or even “heterosexual,” for that matter. But my identity as a child of the living God must be in Jesus Christ alone (187).

Some may take issue with Christopher’s conclusion that “holy sexuality is not focused on orientation change—becoming straight—but on obedience. I realized that obedience means, no matter what my situation, no matter what my feelings—gay or straight—I must obey and be faithful to God” (187).

His view is that we all have sexual temptations that we must deal with until our glorification—some are tempted with heterosexual lusts and others with homosexual lusts.

Holy sexuality doesn’t mean that I no longer have any sexual feelings or attractions. Nor is it the obliteration of my sexuality either. God created us as sexual beings with the natural desire for intimacy. And everyone is created to desire intimate, God-honoring, nonsexual relationships with the same gender. But because of the effects of original sin, this normal feeling has been distorted. I believe homosexuality (and any other sin, such as jealousy, pride, and gluttony) stems from a legitimate need fulfilled in an illegitimate way (188).

He further develops his view of holy sexuality in two contexts. For the married person, “holy sexuality means focusing all our sexual feelings and behaviors exclusively toward one person, our spouse” (188). He believes that this level of change is possible for the person with same-sex attraction.

Holy sexuality and singleness means that “single people must devote themselves to complete faithfulness to the Lord through celibacy. This is clearly taught in Scripture, and abstinence is not something unfair or unreasonable for God to ask of his people” (188).

On his website, especially in the FAQs, Christopher develops his views in more detail on important issues such as sexual identity, same-sex attraction, sexual orientation, whether can gays change, and whether homosexuality a choice. Perhaps a future edition of Out of a Far Country could include his FAQs in an appendix.

Angela’s final chapter is “Redeemed” and Christopher’s is “Finally Home.” Both are appropriately titled and appropriate conclusions to Out of a Far Country. As Christopher came out and then came home, so the Father calls those who are a long way off to come home. Out of a Far Country speaks to prodigals, parents of prodigals, and all those wanting to minister to those struggling with same-sex attraction, pointing all of us to the Redeemer.

Bob Kellemen, PhD, has pastored three churches (and launched biblical counseling ministries in each), served for a dozen years as the founding chairman of the M.A. in Christian Counseling and Discipleship Department at Capital Bible Seminary, is the founder and CEO of RPM Ministries, and serves as the executive director of the newly launched Biblical Counseling Coalition. He is author of Equipping Counselors for the Local Church: The 4E Ministry Training Strategy (P&R, 2011).