During a recent presentation at the Evangelical Theological Society, I was reminded that well-informed Christian leaders continue to hold stereotypes about “biblical counseling.” During the Q/A time after my paper on “A Theologically Informed Approach to Sexual Abuse Counseling,” one attendee stated, “That’s a more robust and relational approach to biblical counseling than I’ve heard before. Previously, I would not have referred a victim of sexual abuse to a ‘biblical counselor’ because I assumed they would simplisticly and heartlessly quote Scripture at them, and not empathetically grieve with them.”

From the outset, Lambert, professor of biblical counseling at Boyce College in Louisville, Kentucky, clarifies several important misconceptions. First, he notes that “counseling is ministry, and ministry is counseling. The two are equivalent terms” (21). Second, Lambert explains that “if counseling is equivalent to ministry, it means that it must be informed by the Bible and that those who do it are theologians” (21).

He notes that even conservative, Bible-believing, Christ-exalting ministers of the gospel fail to grasp that counseling is an essential part of ministry. “They demonstrate the misunderstanding every time they say things like, ‘Oh, I don’t counsel people; I’m a preacher.’ Or, ‘Counseling takes too much time way from my other ministries.’ Or, ‘I don’t think the Bible has anything to say about this problem; you need to see a professional’” (22).

At this point Lambert connects his own view of biblical counseling to Adams’s original purpose and calling in launching the nouthetic counseling movement. “I was captivated by Adams’s vision to reclaim counseling as a theological and ministerial task and of his mission to make counseling an enterprise that was centered on Christ, based on his Word, and located in the local church” (23).

This is one of numerous times where Lambert demonstrates his understanding of the historical context behind nouthetic counseling and his respect for the role that Adams played in returning the church to the personal ministry of the Word. Lambert traces the history of pastoral counseling in America and builds the case that “the absence of theology in counseling was the order of the day when, in 1970, Jay Adams published Competent to Counsel” (35). It is impossible to understand or appreciate the pioneering work of Adams apart from grasping that “it was the role of Adams to begin to restore to the church an understanding that it had held before the American Civil War, namely, that counseling was within the realm of the church, every bit as much as its counterpart in public ministry, preaching” (36).

Lambert is careful to express his appreciation for Adams.

This is a book about how biblical counselors have grown up and matured since the initial leadership of Jay Adams, but it is not a strike against Adams. His work revolutionized the way thousands of people do ministry. . . . God has used him mightily to recalibrate the church’s thinking about how to help hurting and struggling people. I have no interest in any sort of unkind or ungodly attack on a man to whom the church owes much (47).

That said, The Biblical Counseling Movement After Adams is not hagiography. Lambert writes, “Jay Adams’s work was imperfect. . . . Adams built a movement from scratch, almost alone, and was doing so against powerful forces opposed to his model. It is my goal to honor Dr. Adams by carefully considering his work and the context in which he built it and by highlighting the efforts of the men laboring in the tradition he began, to improve upon the good work he started” (47).

It is within this context that Lambert selects the family or generational metaphor. He references Adams as “the first generation of biblical counseling” and refers to the leadership of David Powlison and others who followed him in improving Adams’s thoughts as “second generation biblical counselors.” 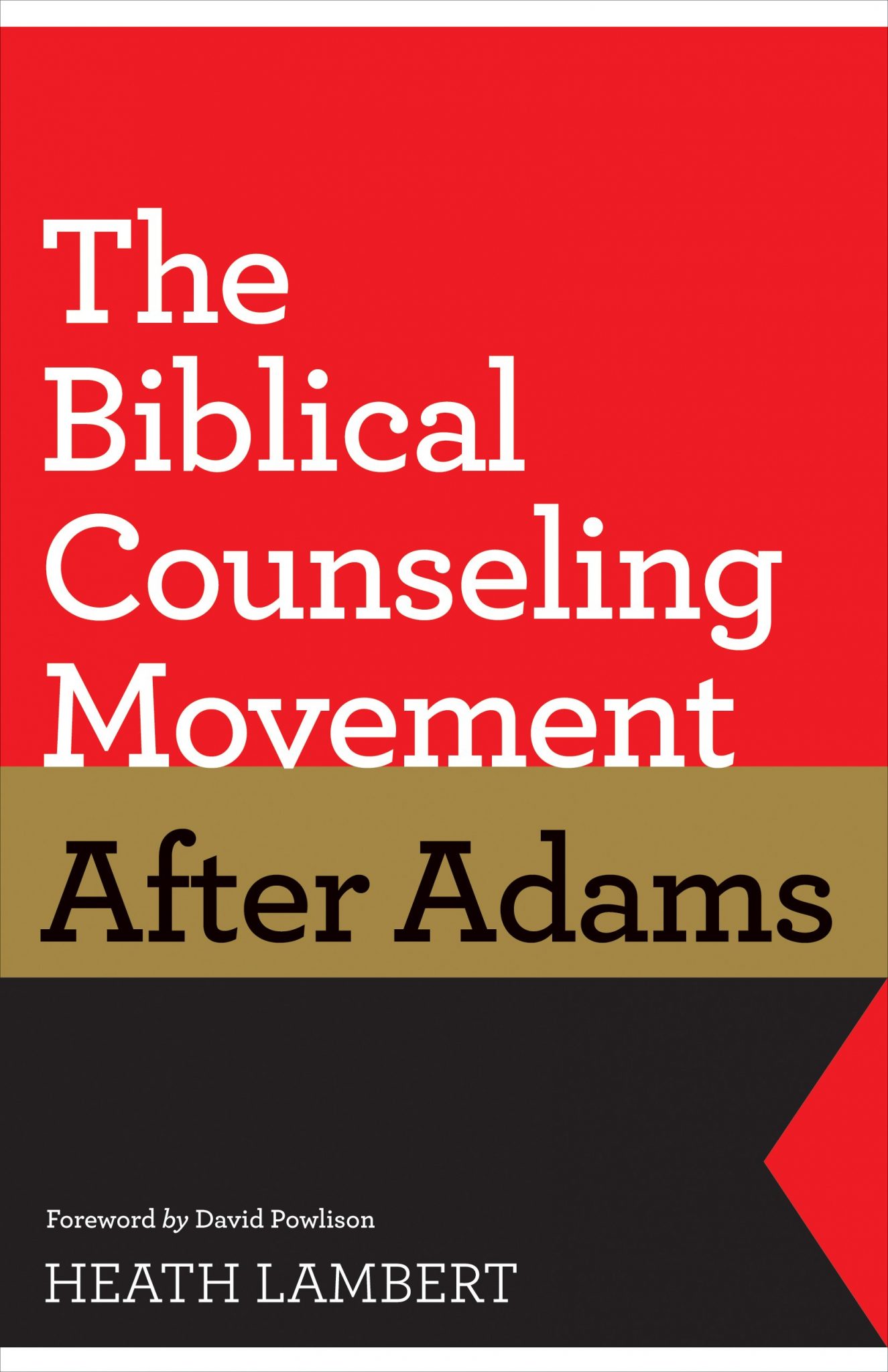 The Biblical Counseling Movement After Adams

The Biblical Counseling Movement After Adams

Those inside and outside of the biblical counseling movement recognize growing differences between the foundational work of Jay Adams and that of current thought leaders such as David Powlison. But, as any student or teacher of the discipline can attest, those differences have been ill-defined and largely anecdotal until now. Heath Lambert, the first scholar to analyze the movement’s development from within, shows how refinements in framework, methodology, and engagement style are changing the face of the biblical counseling movement as we know it―producing a second generation of counselors who are increasingly competent to counsel.

Here, Lambert’s solid historiography could have been strengthened. In introducing this second generation, Lambert opines that “by the late 1980s and early 1990s new leadership began to rise up, mostly out of one of the organizations founded by Adams, the Christian Counseling and Educational Foundation (CCEF). . . . The new blood consisted of men such as Ed Welch and Paul Tripp, but the clear leader was David Powlison” (44).

While many familiar with the biblical counseling movement might agree with Lambert’s summary, he provides only anecdotal support for who should be considered representative of each generation. Lambert’s two-generational model could have been reinforced by an operational definition of first generation and second generation biblical counseling followed by a quantitative examination of the literature over the past 40 years to determine who best represents which generation. And it might have raised to the surface additional counselors and organizations that could have broadened, deepened, and enriched the contrasts/comparisons between these two proposed generations of biblical counselors.

Still, The Biblical Counseling Movement After Adams is a valid and valuable book for anyone who wants to understand what makes biblical counseling truly biblical, and how the modern biblical counseling movement has developed over the past 40 years. Throughout the book, Lambert focused on three areas of advancement from the first to the second generation:

In each section, Lambert culls from Adams’s writings to summarize his approach to theory, methods, and apologetics. He then compares and contrasts Adams’s views with those of second generation counselors like Powlison, Tripp, Lane, Welch, and a few select others.

Advances in How Biblical Counselors Think about Counseling

Regarding sin and suffering, Lambert provides a helpful summary of his view of the contrast. “The model that Jay Adams developed included a heavy emphasis on confronting sin patterns observed in counseling. While the second generation has not abandoned the need to confront sin, it has sought to advance the movement by seeing the counselee in a more nuanced way as both a sinner and a sufferer” (50).

Lambert places Adams within his historical context—the need to draw the church back to a focus on responsibility. He sees Adams as someone who understood human suffering and the Bible’s teaching on it, but who, because of the historical context, did not develop a robust theory or methodology for counseling the suffering.

In contrast to the stereotype illustrated in the beginning of this review, Lambert provides copious documentation of second generation biblical counseling writings about a parakaletic approach to sufferers. Their biblical “sufferology” includes biblical comfort (2 Cor. 1:3–11), biblical connection (Rom. 12:15), biblical compassion and identification (Heb. 2:10–18; 4:14–16), and much more.

The section on advancement concerning human motivation is likely to be hotly debated by people within and outside the movement. Lambert explores the charge that Adams’s model was behavioralistic (a charge Adams ferociously denies), and he provides documentation proposing that second generation biblical counselors have constructed a more thorough understanding of heart motivations.

Advancements in How Biblical Counselors Do Counseling

Lambert begins this section by noting several areas of overlap between first and second generation biblical counseling methodology. He then contends that Adams’s overall methodology was “overly formalized” (87), and that “Adams’s emphasis on pastoral authority tended to obscure the importance of building loving relationships with counselees” (88).

While appreciating the historical context behind Adams’s strong emphasis on formality and authority, Lambert applauds second generation methodological advancements. These include counseling that is familial (90–91), sacrificial (92–93), person-oriented (94–96), demonstrates affection (91–92), sees the counselor as a fellow sinner and sufferer (96–97), and addresses suffering before sin (97–98).

Advancement in How Biblical Counselors Talk about Counseling

Lambert tells the fascinating story of eight stages in the history of biblical counseling dialogue with “non-biblical counselors.” In the process, he outlines three primary areas where second generation apologists matured:

In this section, the changing tone (more gentle) and attitude (more respectful) of the second generation counselors was touched upon but could have been examined further.

While not everyone will agree with all of Lambert’s contrasts and comparisons, especially those most loyal to Adams and his nouthetic counseling model, the book successfully breaks down many still-existing stereotypes about the modern biblical counseling movement. More importantly, it articulates a robust, relational approach to one-another ministry while teaching about the history of the movement.

Bob Kellemen, PhD, has pastored three churches (and launched biblical counseling ministries in each), served for a dozen years as the founding chairman of the M.A. in Christian Counseling and Discipleship Department at Capital Bible Seminary, is the founder and CEO of RPM Ministries, and serves as the executive director of the newly launched Biblical Counseling Coalition. He is author of Equipping Counselors for the Local Church: The 4E Ministry Training Strategy (P&R, 2011).