Glancing at the titles of biographies of German theologian Dietrich Bonhoeffer would lead you to believe he lived a life of great heroism. Eric Metaxas’s playful subtitle claims Bonhoeffer was a “pastor, martyr, prophet, spy.” Another subtitle says he was a “man of resistance,” while yet another calls him both a spy and “an unlikely hero.”

The epic titles certainly grab the eyes of potential readers. And for kids who think Christianity is boring, what could be better than a spy who stood up to Hitler? See, kids, Christianity is exciting. This pastor was a spy who planned to help assassinate history’s most notorious madman.

This is all well and good until you take a deeper dive into the life and work of Dietrich Bonhoeffer, who lived—as far as we can tell—a relatively unexciting life. He spent a lot of time reading, writing, thinking, and teaching, and, while producing bold work, lived a normal and privileged life for a pastor, even in prison.

“Bonhoeffer himself would never imagine his actions as heroic in the least,” Charles Marsh wrote in his spectacular biography, Strange Glory (read TGC’s review). Bonhoeffer’s life didn’t include a lot of heroism until its end. 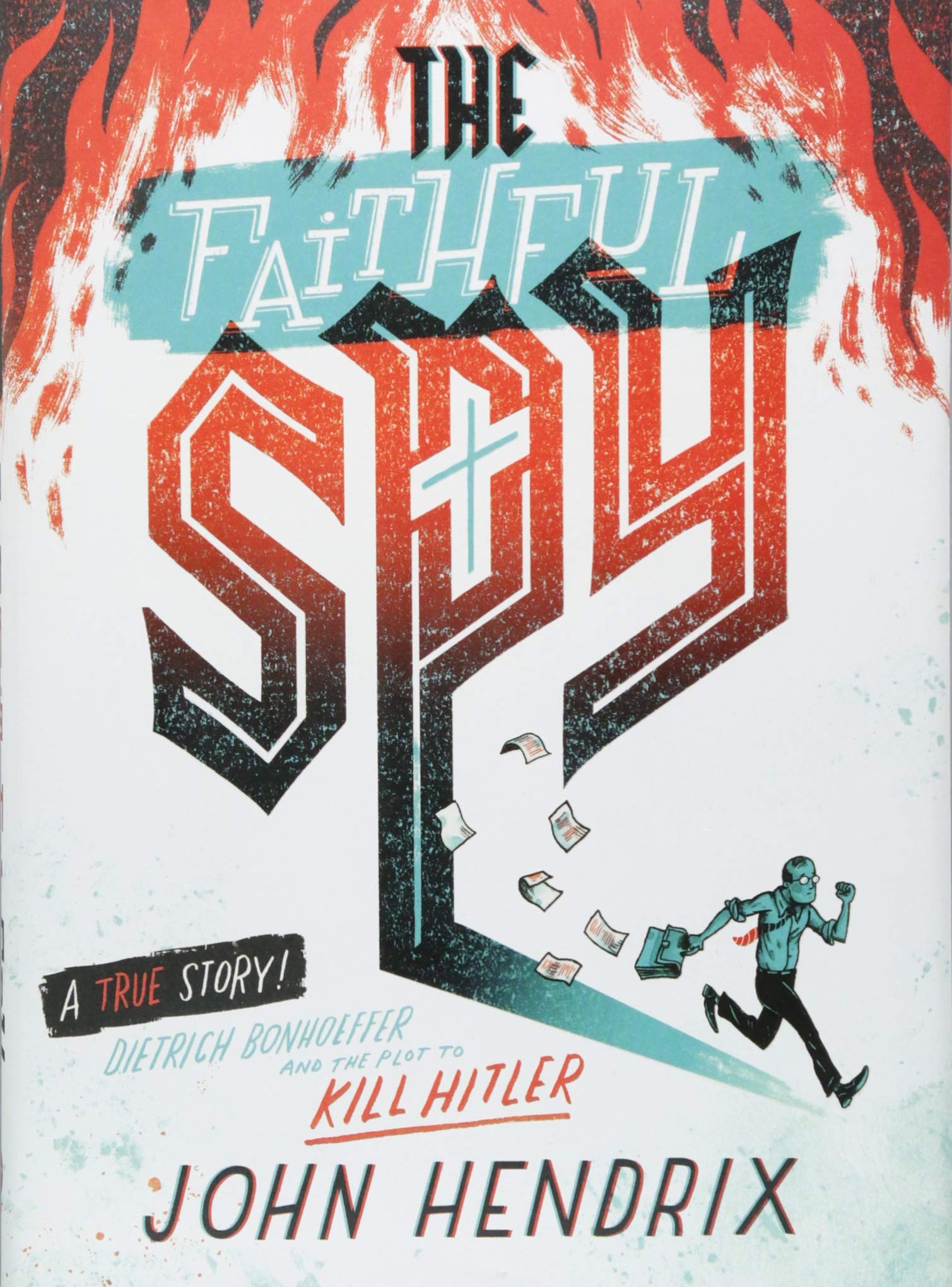 The Faithful Spy: Dietrich Bonhoeffer and the Plot to Kill Hitler

The Faithful Spy: Dietrich Bonhoeffer and the Plot to Kill Hitler

Adolf Hitler’s Nazi party is gaining strength and becoming more menacing every day. Dietrich Bonhoeffer, a pastor upset by the complacency of the German church toward the suffering around it, forms a breakaway church to speak out against the established political and religious authorities.

In his signature style of interwoven handwritten text and art, John Hendrix tells the true story of Dietrich Bonhoeffer, a pastor who makes the ultimate sacrifice in order to free the German people from oppression during World War II.

This is why I approached John Hendrix’s The Faithful Spy: Dietrich Bonhoeffer and the Plot to Kill Hitler with some reservation. This graphic novel, with the words “KILL HITLER” on the cover next to a small drawing of a middle-aged Bonhoeffer on the run—papers flying from his briefcase—completely reversed my suspicions. This book gave me a deeper respect for Bonhoeffer as a singular life, the graphic novel as a form, and Hendrix as a writer and illustrator.

Hendrix desires to blend accurate history with the philosophical, theological, and political ideas of Bonhoeffer. The Faithful Spy starts in little Dietrich’s bedroom as he dreams and talks about eternity with his twin sister, Sabine. From there, Hendrix recounts not just the story of Bonhoeffer, but of Germany and Hitler too. He does this by using a simple, tricolor design throughout the book (Hitler is red; Bonhoeffer is teal). The colors change as he either explores the Führer or the pastor.

Here it must be said clearly: this is a beautiful book.

Pages of red follow pages of teal, and, when needed, the two blend together. As I read, I realized how few Bonhoeffer biographies include a history of Hitler’s rise to power. Hendrix’s bibliography and endnotes are both impressive and insightful. While there are some glaring omissions (no Reggie Williams or Michael Pasquarello!), Hendrix certainly did enough reading and research to give us an accurate representation of both Hitler and Bonhoeffer. 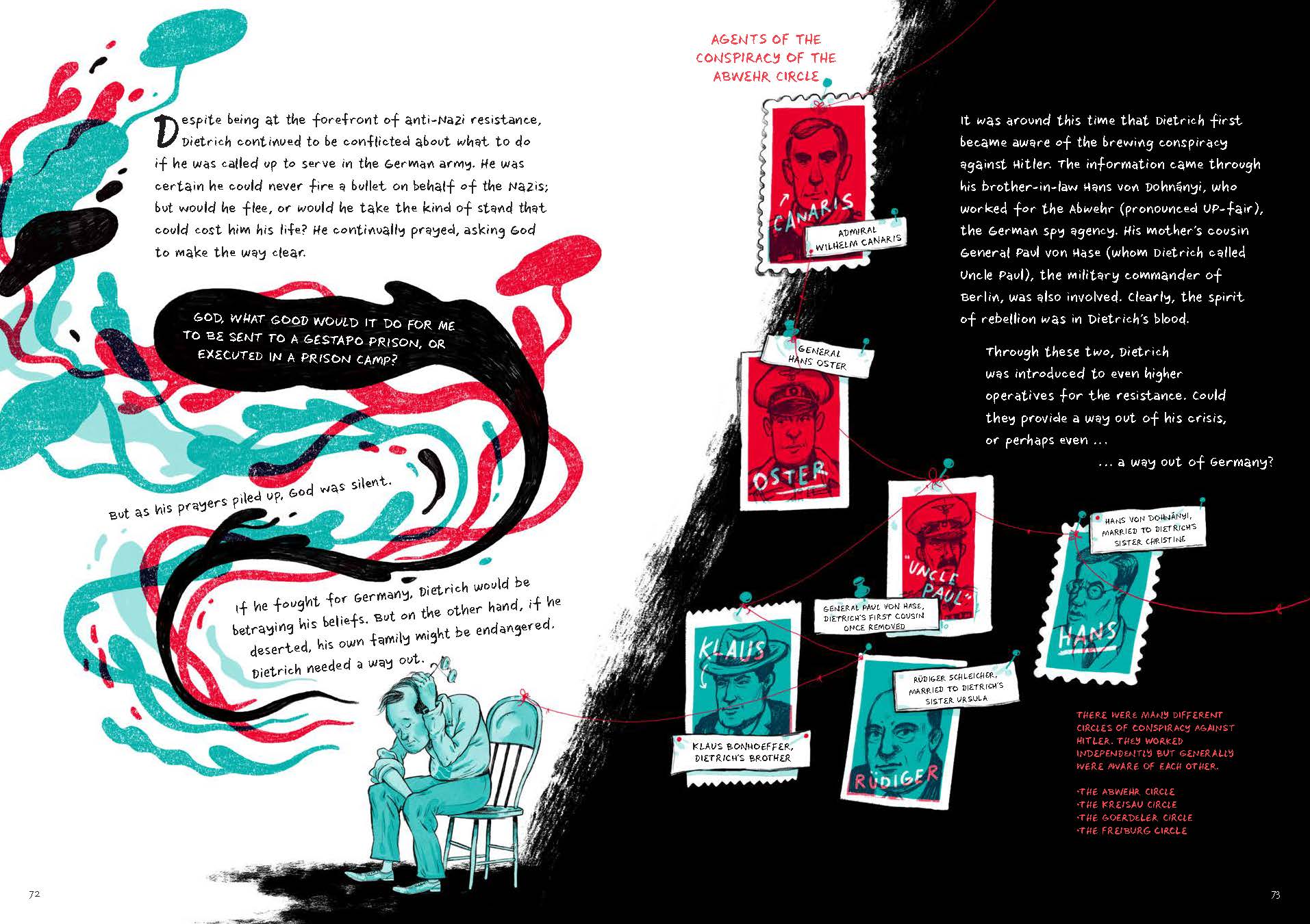 The book takes the usual twists and turns on the pastor’s life, emphasizing the right moments at nearly all the right times. Perhaps Hendrix’s best work is the chapter he dedicates to Bonhoeffer’s season in Harlem, New York. This includes drawings of the pastor’s relationships with both Frank Fischer (who introduced Bonhoeffer to the black church) and the Frenchman Jean Lasserre. Hendrix traces Bonhoeffer’s life the way it must be traced: through a series of intellectual ascents he makes within his key relationships.

This is what makes Hendrix’s work both beautiful and also difficult. Bonhoeffer wasn’t so much shaped by events as he was relationships. These included long discussions and extended correspondence with a diverse group of thinkers he met. It was the ideas within these relationships that moved Bonhoeffer, and Hendrix honors this well. With plenty of opportunities to overdramatize this rare life, Hendrix doesn’t do it. And he honors the people who helped Bonhoeffer think rightly about the situation in Germany, leading him to take his stand and receive his death.

Bonhoeffer wasn’t so much shaped by events as he was relationships.

And this is why some readers, who are expecting more panel-to-panel events typical of graphic novels, might be disappointed. The book has a lot of text, particularly as the story progresses, and I was often disappointed when a page-turn meant another long section of prose (and I love reading!). I so enjoyed Hendrix’s panel work that I always wanted more, and yet, I wonder how he could’ve honored Bonhoeffer’s somewhat simple life and still included more scenes of action (Hendrix alludes to this in a superb afterword).

Here it must be said clearly: this is a beautiful book. Hendrix is a talented artist. A simple skim through the pages will leave you hovering over certain drawings for a long time. But Hendrix’s prose shouldn’t go unnoticed. A talented writer with a knack for both compelling motifs (e.g., his interplay of Hitler as a wolf) and sound word choice, Hendrix moves the story along while making his historical digressions clear and parenthetical. With its accuracy, readability, and beauty, it’s the best introduction to Dietrich Bonhoeffer I’ve seen.

Bonhoeffer led a Christlike life. “He had no form or majesty that we should look at him, and no beauty that we should desire him” (Isa. 53:2). And yet, like Christ himself, his seemingly ordinary life and habits are illuminated by his suffering. For Bonhoeffer, his suffering was the culmination of much thinking, writing, preaching, befriending, developing, teaching, talking, and philosophizing. There came a point where courage was required, and because of prior providential preparation, he was able to stand and die. There’s nothing boring about it. 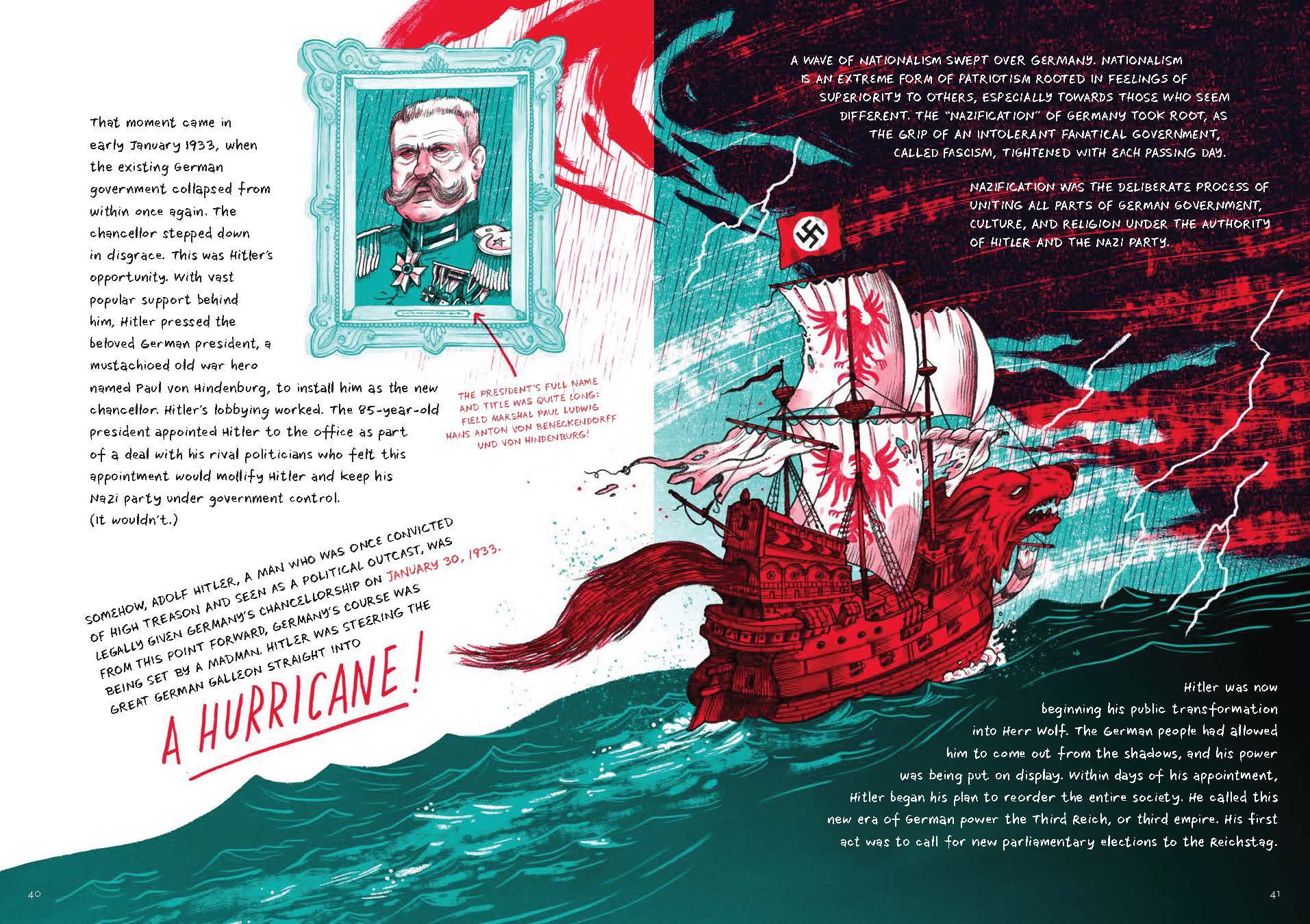 Chris Nye is a pastor for teaching and leadership development at Awakening Church in the Silicon Valley and the author of Distant God. His latest book is Less of More: Pursuing Spiritual Abundance in a World of Never Enough.