If our theological convictions were a house, some books build the foundation, stabilizing the ideas we hold about God. Others paint the structure with brilliant and beautiful colors, giving what we believe about God a kind of vibrancy.

The trick, then, is to discern which books should build up the foundation, and which should be left for the painting. It’s not hard to imagine readers wondering where exactly to place Emmanuel Carrère’s latest book, The Kingdom, as they construct their own theological house.

This book is nearly impossible to pin down in a particular genre. The Library of Congress deemed it fiction and biography, which, after having read it, seems to be about the best one can do, but how can it be both? One reason to pick up this book is to go about the adventure of trying to solve this mystery. Is The Kingdom a spiritual autobiography of one of France’s best writers? Yes. Is it a historical narrative of the life of Luke and Paul? Yes. Is it fiction? Yes. Is it history? Yes. And is it good? Very much so.

It’s the kind of genre-blending that should be expected of Carrère. Throughout his career as a novelist, screenwriter, and even a film director, Carrère has written a semi-fictional biography of Philip K. Dick, a semi-true psychological thriller mixed with personal memoir, and the appropriately titled book My Life as a Russian Novel, which oscillates back-and-forth between a small, fictional Russian city in chaos and the author’s own relational turmoil in Paris. And that’s just some of his work.

Now enter Carrère’s latest, The Kingdom. He begins with a sort of testimony in reverse. It’s apparent he doesn’t believe in Christ, or at least has massive reservations about Christianity itself, when he talks about working on a “project” on the biblical figures of Luke and Paul—a sort of biography of the men who started the church, for whom Carrère seems to have deep affection.

What Carrère does not have affection for are the simple. He wants reasons, not childlike faith. This, in the end, is what drew him away from his Catholicism. The more he worked on The Kingdom, “The clearer it has become to me that it’s very difficult to get people to talk about their faith, and that the question, ‘What exactly do you believe?’ is a bad one.” He wants to interview Christians, he states, “the way I’d interview people who’d survived a plane crash,” but he kept finding it fruitless because the questions were mostly unanswerable. But also “[b]ecause in fact I’ve had very close access to one Christian for several years, someone, indeed, you could hardly be closer to, because it was me.”

From there, the tension of the book is set, and it pulls in multiple directions, always involving four characters: the author, the Gospel writer Luke, the apostle Paul, and Jesus Christ. It is divided into these sections: “A Crisis” (the biographical section), “Paul,” “the Investigation” (chronicling the formation of the four Gospels), and finally, “Luke.” Other characters come and go—his ex-wife, his best friend Hervè, Philip K. Dick, his daughter, St. Francis of Assisi, and a whole host of biblical characters including Philip, Timothy, John Mark, Mary, Peter, and James—but Carrère is the center of this book. While inhabited by biblical figures, The Kingdom is ultimately about the author’s faith, his struggles, and his perceptions of Christianity.

Most of the autobiographical section has one thread running through: Carrère’s devotional practice. He spent years—nearly every day—writing a commentary on the Gospel of John after his conversion to Catholicism. Most of those notes don’t appear in this section of The Kingdom, but they’d likely bore us anyway. 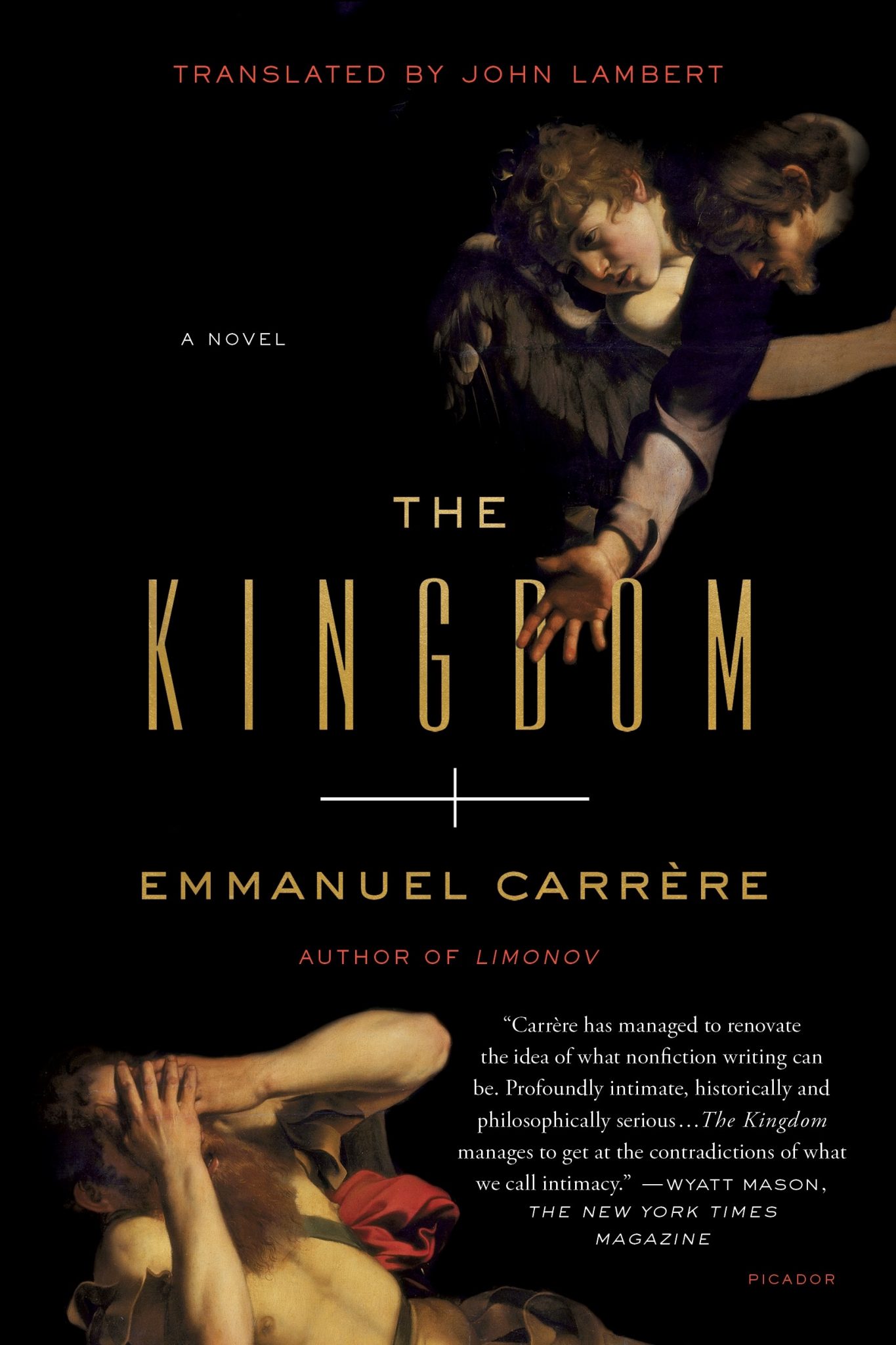 Gripped by the tale of a Messiah whose blood we drink and body we eat, the genre-defying author Emmanuel Carrère revisits the story of the early church in his latest work. With an idiosyncratic and at times iconoclastic take on the charms and foibles of the church fathers, Carrère ferries readers through his “doors” into the biblical narrative. Once inside, he follows the ragtag group of early Christians through the tumultuous days of the faith’s founding.

Boldly blending scholarship with speculation, memoir with journalistic muckraking, Carrère sets out on a headlong chase through the latter part of the Bible, drawing out protagonists who believed they were caught up in the most important events of their time. An expansive and clever meditation on belief, The Kingdom chronicles the advent of a religion, and the ongoing quest to find a place within it.

What Carrère does instead (which was a brilliant choice) is let us not into the words of the commentaries, but the feeling behind writing the words—the struggle beneath the product. This is by far more interesting.

“The encounter with God,” he writes referring to that process, “has changed my soul—and my opinions—but not my heart. I continue to love no one but myself, and badly at that. But even that is planned for.” He quotes Ezekiel as “the prayer I need,” saying, “I repeat it nonstop: ‘Lord, remove my heart of stone and give me a heart of flesh.’” Most every Christian should be able to identify with this beautiful little passage.

The more historical sections on Paul, Luke, and what he calls “the Investigation,” struggle to find their balance between historical criticism and historical fiction. Carrère’s writing is most inspired when imagining a scene from Scripture—like his rendering of Paul’s conversion (“What scared [Paul] wasn’t any external danger but what was stirring, like a beast, in his soul. . . . [I]t was no longer around him. It was crouched deep within him, ready to devour him from the inside”), or his telling of the disciples on the road to Emmaus (“They were no longer sad, not at all. And although it was strange, they admitted to each other that they thought they’d never be sad again. That sadness was over”).

While Carrère doesn’t affirm the infallibility of Scripture, he still possess a deep reverence for it, and I found myself challenged by his imagination for the potential within biblical stories. He doen’t treat them lightly, and the reader is left thinking, “Neither should I.”

The Kingdom is saturated with Scripture but also with its historical context. Carrère has done his homework. Still, readers will be disappointed to see that the book is severely limited by his obsessions (his overuse of the 19th-century historian Ernest Renan narrows his scholarly curiosities, and there’s a surprisingly long pornographic section that’s far too self-indulgent). The book is packed with remarkable observations that drove me back to Scripture itself, but also left me disappointed realizing Carrère has read little modern scholarship, according to this book (someone hand him some Richard Bauckham!).

The believers who criticize Carrère will be those trying to fit him into a particular genre. But one must approach this book for what it is—a creative and beautiful work of literature. To cast this as historical or fictional or biographical will be a mistake. It’s something entirely different.

The Kingdom is not for those who need theological foundations, but rather for those whose theology has become drab and stale. A fresh coat of paint can do wonders to an already well-built house.

Chris Nye is a pastor for teaching and leadership development at Awakening Church in the Silicon Valley and the author of Distant God. His latest book is Less of More: Pursuing Spiritual Abundance in a World of Never Enough.