I’m teaching ancient history to 10th graders this year, and one of the things I’m excited about is crafting my own booklist. In addition to selecting the perfect translations of The Iliad, The Odyssey, and The Epic of Gilgamesh, I added Mike Cosper’s Faith Among the Faithless: Learning from Esther How to Live in a World Gone Mad.

Because amid reading the pagan classics this summer (which I unapologetically enjoy), Cosper’s take on the story of Esther quickly became the book I was most excited to introduce to my students.

Cosper, founder of Harbor Media, makes us a promise in the introduction:

For many of us, this is a familiar story, and I want to make the familiar strange, or at least fresh. If I have taken too many liberties, I apologize. I come from a long line of storytellers, and storytellers tend to emphasize the parts they like best. I am not so much trying to entertain as to bring your attention to some of the details. I also hope to help you see these characters in their glorious, broken, and sometimes terrifying humanity. (xx)

And he does just that. Throughout Faith Among The Faithless, Cosper asks us to revisit the familiar story of Esther, undoing the Veggie Tales remake so many millennials have in their heads (myself included).

He paints King Xerxes, not as a bumbling idiot, but as the same powerful ruler I taught my students about this week, whose empire slaughtered the 300 Greek soldiers of “This is Sparta!” fame. He positions Mordecai, not as the aged and humble servant of legendary godliness, but as an often-conflicted believer trying to be faithful amid pagan power struggles. Esther isn’t the pure, wide-eyed schoolgirl transported to a royal fairy tale, but a Jewish woman trying to protect her identity in the heart of an ancient harem.

Perhaps we can’t quite relate to being exiles living in a a Zoroastrian empire, but we do understand what it’s like to strive to be faithful amid a godless culture.

The story is both taken from the same history books I use weekly in class and also surprisingly modern. Perhaps we can’t quite relate to being exiles living in a Zoroastrian empire, but we do understand what it’s like to strive to be faithful amid a godless culture. And we know what it’s like for our faith to fade from the cultural center stage.

Sometimes, Cosper tells us—and then shows us—faithfulness “looks like Daniel: a steady path of spiritual formation and obedience. But sometimes, and perhaps more often than not in the world we occupy today, it looks more like Esther, a path of awakening, risk, vulnerability, and untimely hope” (xx). 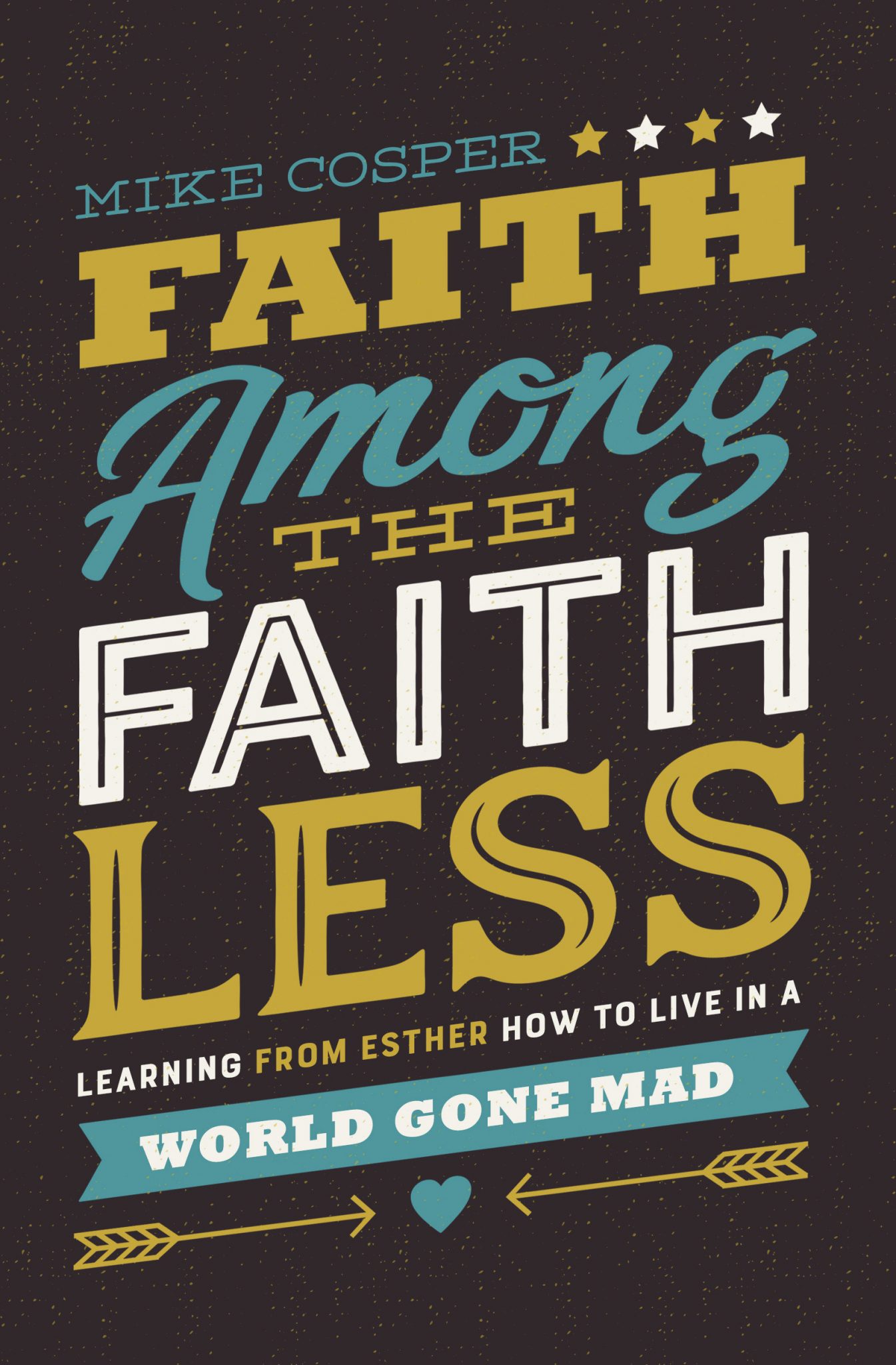 Faith Among the Faithless: Learning from Esther How to Live in a World Gone Mad

Faith Among the Faithless: Learning from Esther How to Live in a World Gone Mad

Can Christianity survive a secular age? Can Christians live without compromise in an increasingly hostile society? And what if they’ve already given in to that society’s vision and values?

In this revelatory and provocative new book, Mike Cosper answers these questions by pointing out the parallels between our world and the story of Esther. A tale of sex, ego, and revenge, the book of Esther reveals a world where God seems absent from everyday life—a world not unlike our own.

As the tale of Esther unfolds, Cosper does indeed show himself to be a talented storyteller, examining each plot point and applying the ancient story to our more familiar context.

The reader must be patient, because Cosper takes his time to unfold the story. Each chapter begins with a vignette from Esther’s actual story, followed by a deeper look at applications we can draw from it. For instance, after Xerxes’s initial drunken request of Queen Vashti, Cosper takes time to teach us about how secularism is “the god of this age,” uncovering the modern-day equivalent of Persia’s idols (13).

I knew by the middle of the first chapter that my students needed to read this book. I want to talk to them, for instance, about our desires, and how Cosper says “we like to think of ourselves as autonomous actors in the world.”

But our desires don’t appear out of nowhere, innate to our hearts. Rather, they’re formed by innumerable explicit and implicit influences that range from our family system to our education to media to politics. When God tells us we’re clay, it’s not just a happy image that promises that he—the Potter—has the power to shape us. It means we’re moldable, and something is always forming and shaping us. (19)

Instead of treating Esther, Mordecai, and Xerxes as though they just sprouted up from the ground one day, ready to take part in this story, Cosper gives ample context for the ways outside influences shaped their participation in this tale. He offers us the same opportunity to look at how those influences shape us.

Not Just for My Students

Make no mistake: As an adult, I gleaned incredible amounts of application and conviction from this book for my own life. By the time he started talking about the differences between vulnerability and victimhood several chapters in, I had closed the book quite a few times for moments of personal reflection (84).

But in God’s perfect timing, this book was dropped in my lap when I was searching for texts to engage the hearts and minds of my pupils. It appears that Cosper read the book of Esther with the same goal, not just as a brief Sunday school lesson, but as rich soil full of nourishment for the modern soul.

[This book is] rich soil full of nourishment for the modern soul.

He humanizes the story of Esther in a way that, for me, had never been done before, moving me to identify with the heroine, not just as a godly example to live by, but as a flawed human striving to obey God’s Word within a flawed, worldly system.

As the book winds to a close, Cosper shares:

Esther’s story is that of a prodigal, far from home, assimilated into a world where she didn’t belong, who had an awakening. Make no mistake, life among the pleasures of the palace is no different from life among the pigs—at least, not after you’ve awoken to the reality of the kingdom of God.

Esther the prodigal daughter isn’t a woman I had ever met before reading Cosper’s book. But I was able to meet her afresh when I revisited the Scriptures more aware of the culture-shaping influences that had guided my reading before. Once meeting her, I couldn’t stop introducing her to others. And I couldn’t stop seeing elements of her story in the stories we’re all walking in.

Jasmine Holmes is a wife, mom, and speaker, and the author of Mother to Son: Letters to a Black Boy on Identity and Hope and Carved in Ebony. She and her husband, Phillip, have three sons, and they are members of Redeemer Church in Jackson, Mississippi. Learn more at jasminelholmes.com. You can also follow her on Facebook and Twitter.