If you’ve heard Voddie Baucham preach, you’ve heard “that thing” he does: making points, arguing with himself by raising objections, then answering those objections and thereby strengthening the case he’s made (13–15). He calls this “expository apologetics”—the title of his latest book. And expository apologetics isn’t just “that thing” he does—he wants it to be that thing you do too.

In Expository Apologetics: Answering Objections with the Power of the Word, Baucham takes the reader through the question of what expository apologetics is (ch. 1); a thoughtful and contextual interpretation of 1 Peter 3:15 (ch. 2); a probing of unbelief and how to respond to it (ch. 3); Paul’s methods of engaging Jew and Gentile audiences (ch. 4); the apologist’s tools of creeds, confessions, and catechisms (ch. 5); the role of the Ten Commandments and other Old Testament laws (chs. 6–7); and some broad steps for apologetic encounters, including help for preachers and teachers (chs. 8–9).

Not Just for Experts

The idea of apologetics is to provide a defense of something, an apologia. According to 1 Peter 3:15, Christians must be ready to make a defense for our hope. As we share and declare the gospel, it will be met with objections. What will we do when these objections arise? Baucham’s aim is clear: “If legitimate objections are standing between someone and his embrace of Christ, I want to address those objections and point him to Christ” (19). In order to do this, we must know what we believe and why we believe it.

Expository apologetics isn’t a task for the “experts”; it’s a tool to aid believers in evangelism (20). And the endgame isn’t winning arguments. The reality is that there’s nothing new under the sun, including objections to the gospel. Since no new truths are being revealed, then, the objections that must be answered cannot exceed the propositions being put forth (21). Sometimes objections are genuine; sometimes they’re smokescreens. 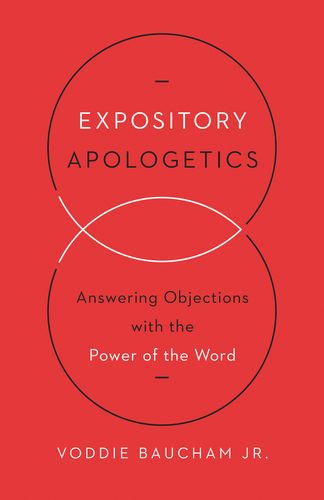 Expository Apologetics: Answering Objections with the Power of the Word

Expository Apologetics: Answering Objections with the Power of the Word

Expository apologetics is the practice of—as book’s subtitle so clearly states—answering objections with the power of God’s Word. Why biblical dependence? Because we know man’s true problem, and we know where to go to find the solution (63–64).

Baucham aims to steel your spine. Like a good coach, he wants to expose your excuses for not wanting to get in the game. Apologetics isn’t about finding the “debater” within you, or about discerning whether you have the right personality for it, or about pursuing higher education, or about a subjective “calling” to apologetics. We have “a biblical mandate . . . staring us in the face” (21). This implies that “many Christians are actually disobeying God’s Word by refusing to engage in apologetics” (35).

Baucham says that expository apologetics is about three things: being biblical, memorable, and conversational (20).

First, being biblical. In our culture, and unfortunately in some of our churches, biblical illiteracy prevails. We cannot assume anything. Indeed, we “must be repared to defend the most basic claims and ideas of our faith” (25). And this means we must know our Bibles—a need that’s all the more urgent when we consider “postmodern/post-Christian thinking, open opposition to biblical truth, and the growing presence of opposing religions” (24).

Second, being memorable. We need truths and tactics we can use in everyday encounters with people. Crucial tools for the apologist’s toolbox are creeds, confessions, and catechisms. Early creeds summarize gospel truths and doctrinal convictions and “are almost poetic in nature, and, therefore, easier to remember” (88). Consider that a “rich, consistent history of confessions . . . flowed out of the Protestant Reformation” (95). A confession is an extended answer to the question, “What do you mean when you say you believe the Bible?” (98). Additionally, catechisms are useful because we learn what we believe by memorizing answers to questions (102), and they generally concentrate on four basic areas: creation and the fall, the truth about salvation/redemption, the fundamentals of prayer through the Lord’s Prayer, and ethics from the Ten Commandments (103).

Third, being conversational. We’re dealing with people, so everyone is different and no situation is the same. Peter says to make a defense “with gentleness and respect, having a good conscience, so that, when you are slandered, those who revile your good behavior in Christ may be put to shame” (1 Pet. 3:15–16). In Baucham’s words, “We must be able to share truth in a manner that is natural, reasonable, and winsome” (20). But make no mistake: “Gentleness is not a lack of strength; it is strength under control. . . . It’s instead a fear or respect for God. In other words, our defense should be given as though we are keenly aware that God is watching” (46).

Proverbs 18:13 says, “If one gives an answer before he hears, it is his folly and shame.” This wisdom is especially pertinent in the task of expository apologetics. Baucham calls it “the most important and least appreciated skill” (147). We must listen to people because people matter. And we must care about understanding their assumptions and summarizing their positions. How can this happen apart from careful, diligent listening?

Only once we’ve carefully heard our objector can we offer feedback, point to inconsistencies in their position, understand the sources for their convictions, correct misunderstandings about the Christian faith, and ask follow-up questions to advance the dialogue (147, 151, 153–154, 157–158).

When engaging in expository apologetics, believers should remember that it’s not an end in itself—the “goal is the gospel” (168–169). As we remember how the Lord saved us and what he saved us from, we should pray for humility in our encounters with others. And since every Christian will have apologetic encounters at some level, Baucham’s book is for everyone. He is a trustworthy and veteran guide on its subject. And his challenges to readers are couched in encouragement as he writes with a pastoral heart and prophetic unction.

May God use Expository Apologetics to stir in its readers a passion for God’s Word, boldness to speak the truth in love, and wisdom to make a defense for the hope within us.

Mitch Chase (PhD, The Southern Baptist Theological Seminary) is the pastor at Kosmosdale Baptist Church and an adjunct professor at Boyce College in Louisville, Kentucky. He’s the author of Behold Our Sovereign God, The Gospel Is for Christians (2nd ed.), and 40 Questions About Typology and Allegory. He is married to Stacie, and they have four boys. You can follow him on Twitter.

3 To End the Killing of Babies, We Need a Loving Revolution