Daniel Nayeri’s heart-wrenching, evocative, and at times hilarious autobiographical novel, Everything Sad Is Untrue, has earned widespread acclaim since its release in 2020, with starred reviews from Kirkus and Publisher’s Weekly and praise from the New York Times, NPR, and the Wall Street Journal. (You can listen to Collin Hansen’s Gospelbound interview with Nayeri.)

His poignant memoir invites readers into the struggles of a refugee caught between a homeland he can no longer claim as his own and a new life in which he feels adrift. He weaves fragments of myth and personal history into his story, with threads intricately looping like the magnificent Persian rugs he describes (some of them studded with jewels, as can also be said of his prose).

These riches alone are enough to reward those who dive into Everything Sad Is Untrue. But Nayeri offers readers something even more precious than the shattering images and reflections that he strings through the book like pearls. Even more profound, even more vital, is the theme of faith—of our hope in Christ—that pulses like a beating heart at the center of his narrative. 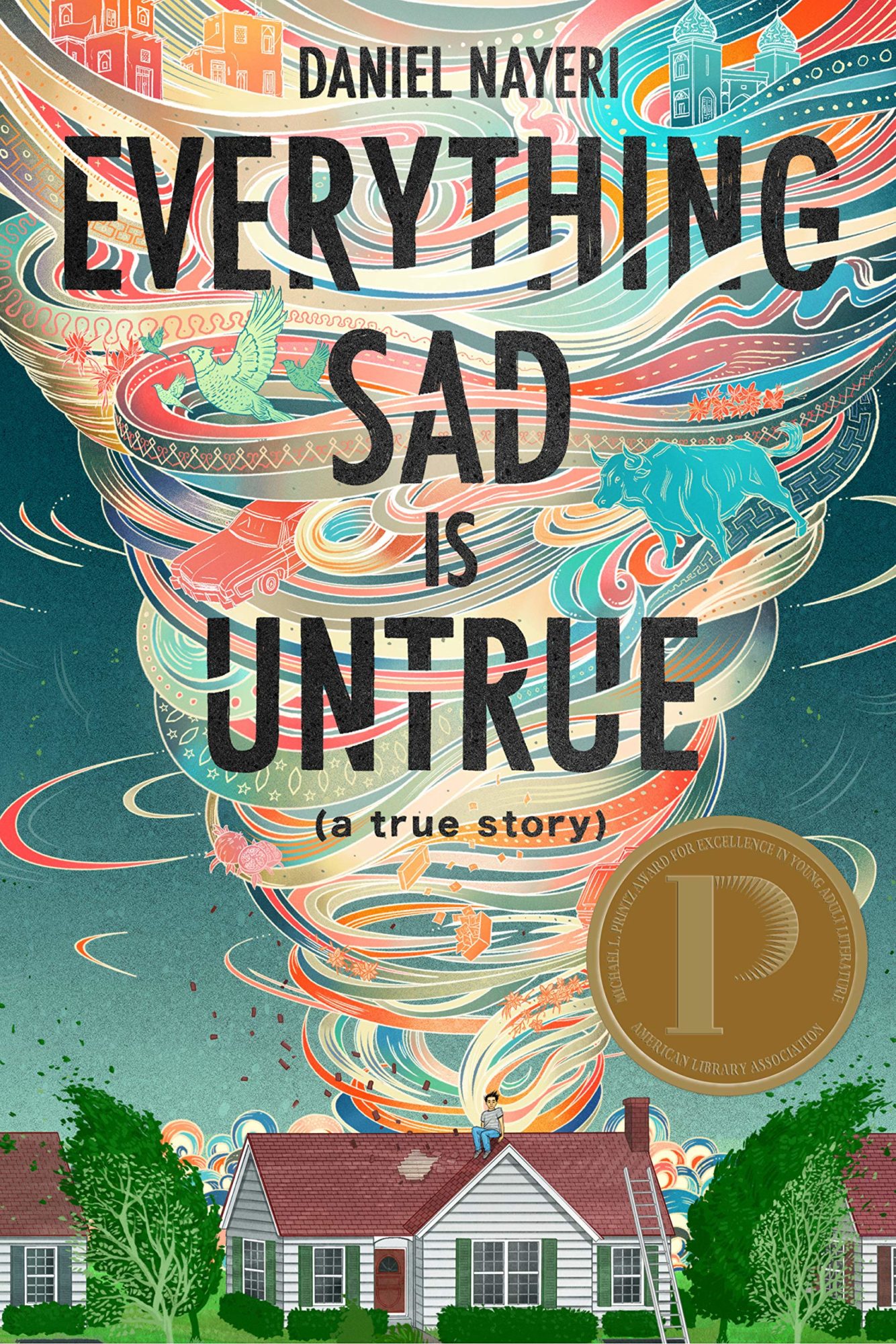 Everything Sad Is Untrue

Everything Sad Is Untrue

“A patchwork story is the shame of the refugee,” Nayeri writes early in the novel. In an Oklahoman middle school, Khosrou (whom everyone calls Daniel) stands in front of a skeptical audience of classmates, telling the tales of his family’s history, stretching back years, decades, and centuries. At the core is Daniel’s story of how they became refugees—starting with his mother’s vocal embrace of Christianity in a country that made such a thing a capital offense, and continuing through their midnight flight from the secret police, bribing their way onto a plane-to-anywhere. Anywhere becomes the sad, cement refugee camps of Italy, and then finally asylum in the U.S.

His hope in the unseen courses through stories of bullying and refugee camps, tragic Persian poems, and his longing to connect with classmates who don’t understand him. In Everything Sad Is Untrue, Nayeri invites us into his family’s journey of courage and heartbreak, and in so doing, he points us to the hope that sustained him through the tempest. He reminds us that while this life will bend and break us, someone will return who will make everything sad untrue.

Nayeri describes his book as an autobiographical novel or a literary memoir; he’s retelling his own history but from the point of view of himself as a 12-year-old. The narrative evolves in a nonlinear fashion, with sections more akin to journal entries than chapters.

While this life will bend and break us, someone will return who will make everything sad untrue.

He acquaints us with his story gradually, beginning with awkward moments at school in Oklahoma, where he spends most of his time concocting elaborate strategies to avoid bullying and embarrassment. After a story he recounts in class garners criticism, for example, he comments, “They don’t believe me because I’m some poor refugee kid who smells like pickles and garlic, and has lice, and I’m probably making up stories to feel important” (3).

Exiled in a land where he doesn’t belong, torn from family he doesn’t remember, with even his name ripped from him (no one in Oklahoma could pronounce his given name, Khosrou), to win his audience he appeals to the One who has made all of us: “I am ugly and I speak funny. I am poor. My clothes are used and my food smells bad. I pick my nose. I don’t know the jokes and stories you like, or the rules to the games. I don’t know what anybody wants from me. But like you, I was made carefully, by a God who loved what He saw. Like you, I want a friend” (16).

Little by little, Daniel reveals he was born to a wealthy family in Iran (his mother was a physician, his father a dentist). When his mother found Christ, their lives changed forever: “She wanted everybody to have what she had, to be free, to realize that in other religions you have rules and codes and obligations to follow to earn good things, but all you had to do with Jesus was believe he was the one who died for you” (196).

When she openly shared her faith, the government of Iran issued a fatwa against her and threatened to kill her children. She fled with Daniel and his sister to Dubai, then to a refugee camp in Italy, and finally sought asylum in the U.S. Nayeri’s father didn’t join their family, a wound that afflicted and confused Daniel for years. Once in the States, their family found safety but also loneliness, humiliation, and discrimination, as well as more violence when his mother married an abusive man.

It would be easy for Nayeri to condemn his mother for wrenching him away from the protected, idyllic life he knew as a young child. Instead, he does the opposite: he unabashedly proclaims his mother as the hero of the story. The faith that changed her life—the truth that Christ is risen—is one to which he also clings:

It’s true and more valuable than seven million dollars in gold coins, and thousands of acres of Persian countryside, and ten years of education to get a medical degree, and all your family, and a home, and the best cream puffs of Jolfa, and even maybe your life. My mom wouldn’t have made the trade otherwise. If you believe it’s true, that there is a God and He wants you to believe in Him and He sent His Son to die for you—then it has to take over your life. It has to be worth more than everything else, because heaven’s waiting on the other side. (197)

Nayeri cherishes the heaven waiting on the other side because he’s seen the horrors of this life. In addition to all the persecution and fear he endured as a refugee, he recognizes the everyday ugliness of our fallen condition. He tells a gut-wrenching account of a bully lopping off his 6-year-old sister’s pinkie finger in a door jamb. His slow-motion account of the moment, with his sister, eager for a friend, innocently following the bully’s instructions, will twist the heart of any parent.

Most arresting, however, is Nayeri’s description of the corruption he saw in that bully, which lurks within us all: “Some kid pelts her with crayons. And everybody has given her bad information: be nice, he likes you. But he doesn’t. He hated her. Even in his brand-new kid heart, he’d found the hate spot” (168).

Healing from the Hate Spot

Although marketed as a middle-grade novel, Everything Sad Is Untrue is probably more appropriate for a young-adult audience (13 and above). Nayeri describes suicide and domestic abuse and includes some graphic descriptions of defecation and bull slaughter that might overwhelm the youngest readers. Additionally, many of the most poignant moments in the book are subtle; few young readers will have the patience or the maturity to know when to pause and savor.

Nayeri cherishes the heaven waiting on the other side because he’s seen the horrors of this life.

With older children, however, especially teens, this would be a wonderful book to read and discuss together, to talk about the many difficult themes of loss, identity, memory, tragedy, faith, and hope that Nayeri weaves together seamlessly. Most of all, it offers beautiful opportunities to reflect on our hope in Christ.

The hate spot is one we all have, and Daniel Nayeri knows it. Yet he also knows a truth so priceless that the brokenness of this life becomes transient. In Everything Sad Is Untrue, Nayeri invites us alongside him to ponder history and legend. He invites us to sift through memories and fragments of memories, turn them in our palms, and assemble them tentatively into a whole.

And he urges us to hope and to lean into the truth that one day, through Christ, everything sad will come untrue.