Oliver O’Donovan arguably rates as the greatest living theologian writing in the English language. He has written on matters ranging from the Thirty-nine Articles to just war theory, and his literary output has been incredibly consistent. Since his dissertation on Augustine’s teaching on self-love (1981), O’Donovan has continued to pen significant tomes. Most notable are his Resurrection and Moral Order, which offers the most serious evangelical introduction to Christian ethics of the last half century, and then his project in political theology, The Desire of the Nations, which offers the most significant entry into that burgeoning field.

Not surprisingly, he has been honored as a fellow of the British Academy, a Festschrift has been published, and emeritus status has been conferred. The accolades fall on one whose vivid exegetical style has been matched consistently by a careful ear to the great texts of the Christian ethical tradition. That skillful pairing is rare, but perhaps less so today because he has modeled and taught it over the past four decades.

O’Donovan has now offered a culminating project titled Ethics as Theology, an effort to think through what he calls “Ethics after Pentecost” (228). Self, World, and Time (2013) and Finding and Seeking (2014) are now matched by Entering into Rest (2017).

How does this trilogy relate to his earlier work? Whereas Stanley Hauerwas quipped that O’Donovan’s earlier Resurrection and Moral Order had much moral order and precious little resurrection (Hauerwas, Dispatches from the Front, 175), O’Donovan here clearly hangs his hat on a distinctly New Testament framing of Christian ethics and the Spirit’s role in opening up a distinctly Christian view of personhood.

Organizing the series around the Pauline triad of faith, love, and hope, O’Donovan summons his reader to “wakefulness” unto “life,” “its direction,” and the “truth that makes it possible” (Self, World, and Time, 9–10). This waking comes from attentiveness to Scripture’s totality and breadth. In the preface of Entering into Rest, he states:

No quarter has been given in these volumes to a methodological monism that champions virtue ethics, command ethics, imitation ethics, or even an ethic of love, against all rivals. The last thing that could benefit Theological Ethics at this point would be yet another reduction of the moral message of the Christian Gospel to a single word, or even to three words. (viii) 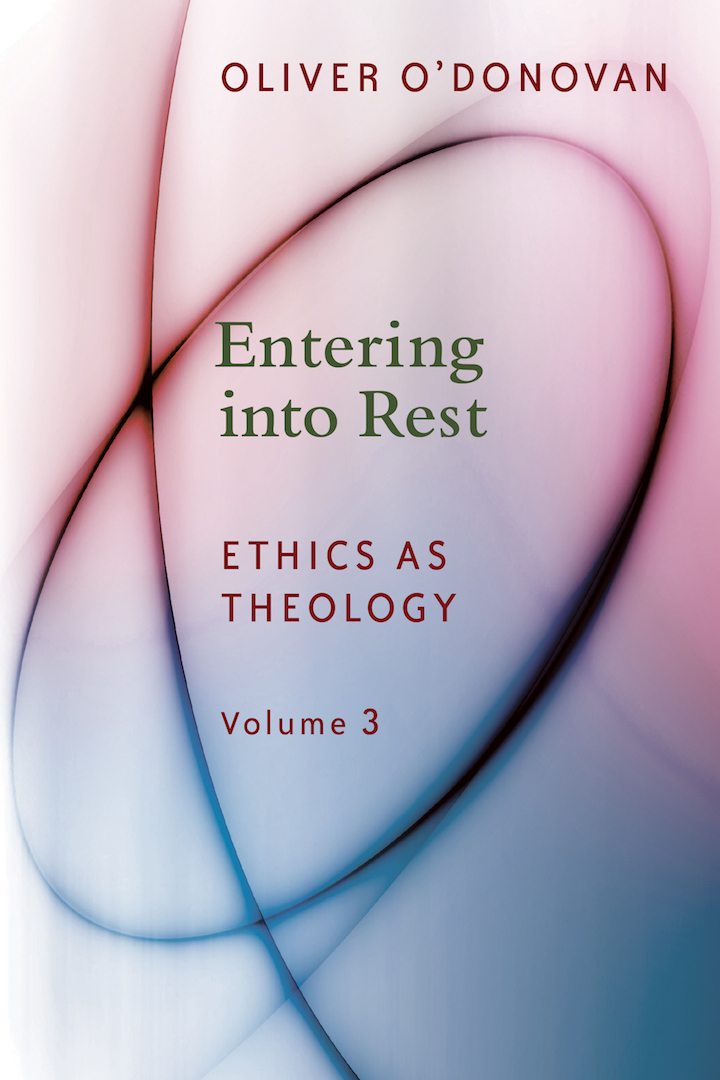 Entering into Rest brings this wider project to a fitting conclusion as O’Donovan seeks to offer this non-reductive wakefulness to Scripture’s instruction. In particular, he riffs again and again on the necessity and insufficiency of attending to narrative instruction (esp. 173–74, 176 n. 10). Whereas many suggest that Scripture is a story or that narrative somehow provides a magical lens for viewing the Christian life, O’Donovan offers a more sober assessment by reminding us that narrative and description demand one another. To flesh out that descriptive task, he returns again to that Pauline triad—faith, hope, love—and fixes his watchful eyes on love.

Entering into Rest begins by charting the way in which love serves as a provisional end and can be helpfully paraphrased as “devotion” (9, 14). When it comes to unpacking love, though, O’Donovan turns to the concept of “communication,” which he notes is a “verbal noun” drawn “of medieval Latin” and used to convey “the dynamic side of the New Testament’s koinōnia” (47). He goes on: “The logic of communication is summed up in the phrase: ‘what is “mine” is “ours”’” (48). Later chapters describe the communication of work (ch. 5), friendship (ch. 6), and meaning (ch. 7)—“beginning in each case from the created human existence that gives rise to them, and then proceeding, by way of the wrongs to which they expose us, to the work of God in sanctifying them, for service, assembly, and witness” (107).

O’Donovan draws into focus some of the most fundamental facets of apostolic ethics. He returns time and again to the central summons to believe and to work that faith out in love (Gal. 5:6; cf. Heb. 11:6; Rom. 14:23). In this regard, he parallels the account of G. C. Berkouwer’s Faith and Sanctification in offering a non-reductive account of how sola fide and solus Christus affect Christian obedience (esp. 72–79). I appreciate O’Donovan’s ardent concern not to rewrite Resurrection and Moral Order, but do wish he had attempted to draw together that project and this one. Perhaps this is most telling in the fact that the Old Testament’s input here is far more marginal than in that earlier text, and readers would benefit from a more explicit connecting of the canonical sinews in this trilogy. At several points I wished he commented at greater length, especially regarding the way Pauline ethics (the triad of 1 Corinthians 13) relates to and riffs on earlier Scripture.

Pastors and ministry workers may profit especially from the way O’Donovan shows the complex and interwoven nest of issues underlying any moral decision-making. It’s tempting to fall into training by use of but one tool—say, divine command in the form of legal instruction. Such rule-based guidance might work well were one to minister in a context where basic Christian orthodoxy could be presumed.

But we’re no longer in such a context, and we do well to attend to first things, to fundamental matters, and to the kinds of biblical and theological principles that provide a matrix of meaning for such reasons. I might add that O’Donovan points out story or narrative will not sufficiently serve as that broader matrix, and those evangelicals who somehow believe biblical theology provides enough ballast to guard against moralism do well to pay heed. Story, like law, is but one form of the divine Word, and O’Donovan calls us away from all narrowings of the “whole counsel of God.”

We live in a time and place—both in the church and also the culture—where systematic reasoning is of the utmost missiological significance. Perhaps in yesteryear one could proceed by tending to laws or stories alone. In the post-Christian West, however, serious metaphysical and moral formation must be provided. And this demand exists not merely outside the church but—if sociological studies regarding the prevalence of “moralistic therapeutic deism” are anywhere close to accurate—also within the church.

Thick discipleship demands a broader and deeper alertness to the ways Scripture forms Christians morally and theologically: not only stories but also virtues, not only metaphysics but also principles, not only wisdom but also song. Like John Webster’s work on the missiological need for a theological theology, O’Donovan has shown what a theological ethics might look like for the sake of Christian mission in our day.

Readers should be warned that O’Donovan has never proven an easy read, and I found this trilogy to be his densest writing yet. Even so, patient reading proves worthwhile, for every chapter offers insightful reflection on pertinent exegesis, historical conversation, or ethical judgment. This judgment is a significant emphasis throughout O’Donovan’s project, not only regarding moral action but also political or social order (see 40–44).

Apart from—or perhaps through—the various excursions that make up this final study, O’Donovan models the kind of theological judgment needed today. Entering into Rest, like the previous volumes in the series, repays at every level. Hopefully, the wider evangelical and Reformed world will attend to his texts and turn again to holy Scripture.