Matthew Barrett (tutor of systematic theology and church history at Oak Hill College in London) and Michael Haykin (professor of church history and biblical spirituality at Southern Seminary in Louisville) endeavored on an unenviable task in Owen on the Christian Life: Living for the Glory of God in Christ.

It’s unenviable, not only because Owen wrote so deeply, so widely, and so much, but because a very similar title by Sinclair Ferguson is still in print: John Owen on the Christian Life (Banner of Truth, 1987). Indeed, Ferguson’s revised PhD thesis has long enjoyed a standard status as an entry point into Owen’s practical theology. Barrett and Haykin acknowledge Ferguson’s “outstanding volume” in their opening pages (16–17). They then explain that rather than retrace Ferguson’s steps, their work will seek to “complement” his by giving greater attention to doctrines which Ferguson omitted: “divine providence, predestination, justification, the person of Christ, [and] the nature of the atonement” (16). The result is an excellent analysis of these doctrines in Owen’s thought—one certainly weighted in a particular, and somewhat unexpected, direction.

This unfortunately leads me to rather quickly and unconventionally address both critiques and compliments of Owen on the Christian Life. The criticisms, by their nature, will require interaction with specific details. My intention isn’t to be picky, but to make a broader methodological point about the relationship between the book’s title and its contents. Likewise, the compliments weaved in and out below may appear to be quick tokens or buffers between critiques, but brevity should not be judged so harshly. They are genuine compliments. At the end of this review, I’ll return to the Ferguson’s standard work and suggest how to utilize this new one by Barrett and Haykin.

Approximately 40 percent of the main text of Owen on the Christian Life is devoted to three chapters: on atonement (ch. 5), predestination/regeneration (ch. 6), and justification by faith alone (ch. 7). These lengthy chapters are worth the price of the book. Together, they would make a nice collection of essays in their own short book. That said, these chapters pose a small problem to the book’s overall project, as they are heavily doctrinal and provide only a few pages here and there on the Christian’s experience of conversion, perseverance, or assurance. Further, one could argue that chapters 5 to 7 predominantly cover doctrines prior to the Christian life. Yes and amen—the doctrines of atonement, predestination, and justification are always foundational to the Christian life. But when one compares the other volumes in this outstanding series (Theologians on the Christian Life), Owen on the Christian Life stands out for its heavier emphasis on these foundational gospel doctrines.

That isn’t to imply Barrett and Haykin don’t address important elements of practical Christian living. Indeed, they do. Particularly helpful are the chapters, “Communing with the Trinity” (ch. 3) and “Beholding the Glory of Christ” (ch. 4). These are in the sweet spot of what one would expect from Owen on the Christian Life. On the other hand, though, other important aspects of Owen’s writings on the Christian life are later analyzed in a way that may actually further substantiate a critique of a curious imbalance in the overall work. For example, “The Indwelling Spirit, the Mortification of Sin, and the Power of Prayer” are treated together in chapter 8—a chapter noticeably short at half the length of the preceding chapter on justification. Anyone familiar with Owen’s thorough treatments of the Holy Spirit (vols. 3–4 of The Works of John Owen) or his watershed works on mortification and temptation (vol. 6–7) will know that 20 pages of analysis is a missed opportunity. Indeed, Carl Trueman’s foreword leads the reader to anticipate a healthy treatment on sin and temptation to be a primary thrust of the book. 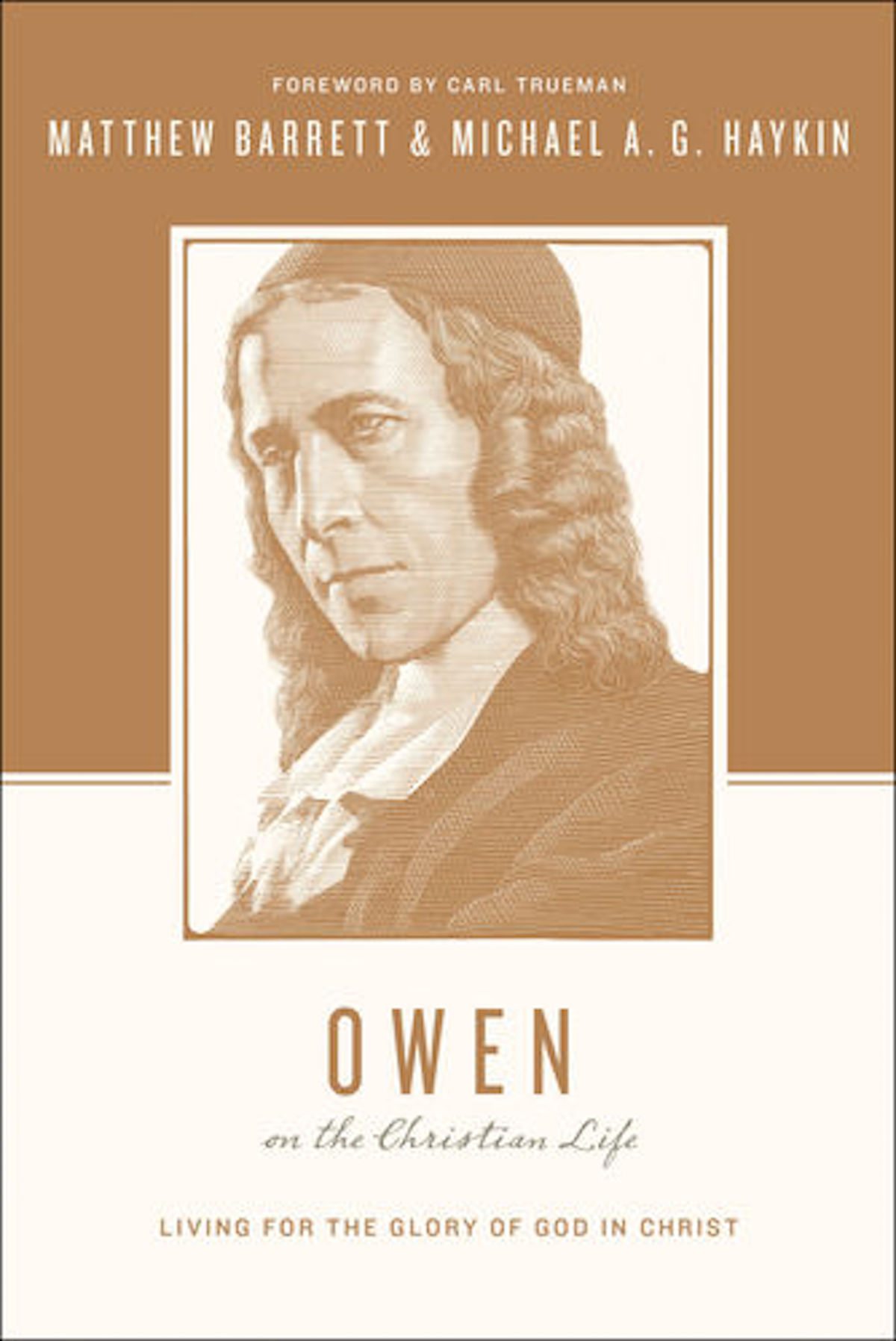 Owen on the Christian Life: Living for the Glory of God in Christ

Owen on the Christian Life: Living for the Glory of God in Christ

A similar assessment can be made of another short chapter, “Living the Christian Life as the Church under the State” (ch. 9). Barrett and Haykin are to be commended for including these corporate aspects of Owen’s Christian life. However, a slightly more patient analysis of church and state would have allowed for more clarity and nuance. Here, too, these are massive themes in Owen’s writings. His sermons (vols. 8–9) are remarkably national/political in their orientation, whether he’s addressing Parliament during the Puritan Revolution (1640s–1650s) or persecuted Puritans (1660s–1680s). Owen’s various writings on ecclesiology occupy four volumes in his Works (vols. 13–16), spanning 40 years. However, Owen on the Christian Life gives 20 pages to matters of both church and state before mysteriously stopping analysis at 1657—just a year short of the important Savoy Assembly, and without any discussion of the very different politico-ecclesiastical environment of Owen’s final two decades.

Chapter 9 on the church and state makes a few technical missteps that should be noted. While the authors rightly suggest that Owen’s understanding of church and state had a strong eschatological orientation, this is simply stated without any substantiation or explanation (249–50). Some readers will be left wondering how or why Owen’s view of “civil government” was “motivated by millenarianism” (250). Millenarianism isn’t defined, and regardless, this isn’t the most precise label for Owen’s eschatology. The “latter-day glory” view Owen espoused was similar to but distinguishable from the “millenarianism” of, say, Thomas Goodwin. Similarly, the “republican” label is mistakenly applied to Owen in Owen on the Christian Life (249–50). Though this was common in older scholarship, the best scholarship of the last couple decades has moved on from a “republican Owen.” Perhaps the chapter’s brevity cost it some clarity on these matters.

There are a few small quirks to Owen on the Christian Life to mention. Identical or near identical sentences appear within a paragraph or two of each other (16–17, 19–20)—no doubt an oversight in reworking material and/or editing a final draft. Two chapters reuse material from earlier publications (chs. 1 and 2)—not an unforgivable sin (or even a sin), but a curious move considering their contents. Chapter 2 (“Living by the Scriptures”), for example, seeks to demonstrate Owen’s commitment to the supremacy of Scripture through his polemical interaction with Quakers. Barrett and Haykin seem to anticipate the disconnect a reader might feel after a chapter critiquing Quakers. They conclude the chapter with a rather vague connection between the Quakers in Owen’s day and “certain charismatic groups” today (51). The overall point is made clear enough—we must not trump God’s Word with experience or “inner light”—but the windy road through 17th-century Quakerism to “certain charismatic groups” will give pause to some. Owen’s interactions with Roman Catholics or Platonic rationalists would have made a more easy and obvious connection for modern readers.

Returning to our beginning, Barrett and Haykin had a difficult task with Owen on the Christian Life. Their preface states their intention to not retrace the paths already so well carved by Ferguson. By and large, the doctrines they do cover are well done. Many more positive things could be said. Yet Ferguson’s work set a very high bar, and provided a unique dilemma for the Owen volume in this series. It would’ve been very challenging for Owen on the Christian Life to have covered the same points and improved on Ferguson’s analysis. The downside to not trying, however, is that several key doctrines in Owen’s Christian life were hurried through or left unaddressed. Barrett and Haykin suggest that their work was meant to complement Ferguson’s, to “look at Owen from another angle” (17). And that’s what we have here—another look at Owen. One which might not be fully represented in the title, or always predictable, but is nonetheless worthy of attention from scholars, students, and saints of all kinds.

So should you read Owen on the Christian Life? Yes, right after you read Ferguson’s still-standard introduction. Then start reading Owen for yourself. There’s much there. The well is deep and the reward is great.

Ryan Kelly (PhD, Vrije Universiteit Amsterdam) is the pastor for preaching at Desert Springs Church in Albuquerque, New Mexico, and a Council member of The Gospel Coalition. Among other publications, he contributed to The Ashgate Research Companion on John Owen’s Theology. He and his wife, Sarah, have four children.