Can anything new be said about the doctrine of Revelation and Scripture? We’ve had Augustine, Calvin, Westminster, and now a century of continued discussion since the watershed moment of Warfield, and we wonder with each new book on the subject what it could possibly have to offer. Truthfully, not a lot has been added since Warfield in terms of substance. But it is of the nature of divine revelation that it is inexhaustible and ever affords fresh insights into “old” truth. And in this volume well-known Reformed theologian John Frame provides the fruit of more than 40 years of faithful and insightful reflection on this most basic doctrine.

Frame’s fourth and (likely) final volume of his Lordship series, The Doctrine of the Word of God, was published last year with the endorsements and high praise of many, including the enthusiastic foreword by J. I. Packer. Finally reading it myself, I was not at all disappointed.

Substantively Frame is of course thoroughly orthodox in his theological outlook. But he does offer a fresh approach and some new thinking. His “personal-word model” is effective—as God spoke to Abraham and to Noah, so he speaks to us today via his written Word. His emphasis on God’s Word as an expression of his authority and Lordship, while not entirely new, is refreshingly stated and sustained—God’s Word carries with it an obligation on our part to respond with trust, obedience, and all that is becoming to our Creator-creature, Redeemer-redeemed relationship. His tracing of God’s Word from God’s mouth to our hearts, through all its varied media, is likewise a very helpful dimension of the work. 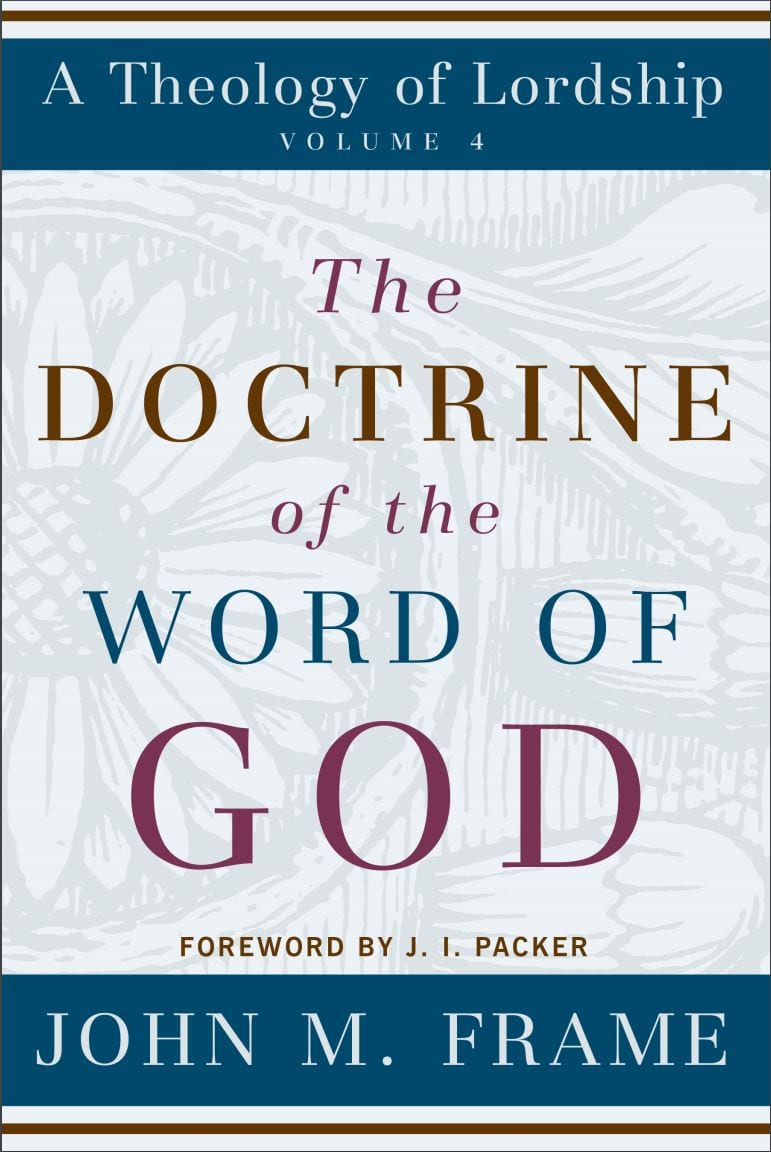 This fourth and final volume in the Theology of Lordship series discusses God’s Word in modern theology and how God’s Word comes to us as his controlling power, authority, and personal presence.

Frame also provides a helpful tweak to the time-honored categories of general/special revelation. Well, actually he wants more than to tweak these categories: he wants to replace them with the categories of “events, words, and persons” with further sub-distinctions within each. The general/special distinction enjoys such a firmly settled place in Christian theology that it is not likely that Frame’s reconstruction will prevail, but I found his suggestion to be helpful in sorting through and delineating the ways God has revealed himself. Indeed, I would enjoy seeing this part of his work fleshed out further. It will certainly find its way into my teaching.

Stylistically, one trait that stands out is Frame’s simplicity. Frame is a very clear writer, unusually able to communicate his thinking simply. This is high praise particularly given that Frame does introduce some new ideas to the discussion. His book is well within the grasp of any serious student.

Another highlight is Frame’s frank and utter confidence in “God’s Word written” (as Warfield was wont to describe it). His warning against “autonomous reasoning” and an accompanying call to submission to God’s Word is relevant and helpful (whether you share his presuppositionalism or not!). He writes as one seeking fuller understanding, yet ever mastered by his subject. He can be frank and even blunt at times, but always the tone is that of a worshiper—submissive to God’s expressed Lordship. This of course ought to mark all genuinely “Christian” scholarship.

Frame’s tome is a massive 684 pages, but it isn’t nearly as daunting as you might think. The book is divided rather evenly in two parts. In the first he develops his argument in 46 brief chapters, totaling just over 330 pages. The brevity of the many chapters, each compact and well-stated, makes for a sense of very quick progress—and for quick reference, I might add. The second half of the book is made up of a series of 17 appendices—book reviews and further elaborations of certain points touched on earlier in the work. I don’t recall another book of this size so easily and so quickly consumed.

All in all it is a fitting capstone to the Lordship series. It is likely that Warfield will remain the landmark in this doctrine for many years to come, but Frame does complement him well. He provides structural help at times that will benefit my own teaching, for which I am grateful, and his work is marked throughout by faithfulness, lucidity, persuasive argument, and even devotion, wonderfully positioning himself and the reader in submission to God’s Word. In short, it is refreshing, enriching and informative—all you could want in a book.

Fred G. Zaspel (PhD, Free University of Amsterdam) serves as a pastor at Reformed Baptist Church in Franconia, Pennsylvania, an adjunct professor of systematic theology at the Southern Baptist Theological Seminary, and the executive editor of Books At a Glance. He is the author of The Theology of B. B. Warfield (2010) and Warfield on the Christian Life (Crossway, 2014) and has published numerous booklets, articles, and book reviews.