Roses are red, violets are blue, Democrats are pro-choice and Republicans are pro-life, right?

Well, things aren’t so simple, and they weren’t always as they appear now. Daniel Williams’s Defenders of the Unborn: The Pro-Life Movement Before Roe v. Wade is the book we’ve needed for a long time, providing a needed remedy to the rampant ignorance and confusion about the history of the pro-life movement.

Williams, associate professor of history at the University of West Georgia, has combed through archival materials of major pro-life and pro-choice organizations, original publications, and correspondence. He recounts how a relatively isolated Roman Catholic effort expanded its reach by changing its tactics. What began as a constellation of local and state grassroots efforts by a loose network of liberals has become part of the conservative base of the Republican Party. How did that happen? And for that matter, how did the GOP—once dominated by pro-choice leadership—become so strongly identified with the pro-life movement?

As Williams notes, pro-lifers changed their strategy in the early 1970s. For example, he documents how they not only turned up the heat on their rhetoric, but also became more aggressive in confronting the American public with the horror of abortion. As he states in remarkably understated fashion, “abortion was a messy procedure” (135). Graphic images of aborted fetuses were part of a concerted effort to awaken America’s conscience with the disturbing carnage of abortion. What Williams doesn’t discuss, perhaps because it’s outside the chronological scope of his study, is the dramatic effect of ultrasound technology on the pro-life movement. While the millennial generation is more liberal than their parents on a number of social issues, they’re a generation that’s grown up seeing four-dimensional videos of their unborn younger siblings.

Two significant themes emerge in the book, both of which carry significant implications not only for the intersection of religion and politics in American life in general, but for the question of evangelical witness in particular. First, how has evangelical engagement shaped the pro-life movement for better and worse? Second, where have all the liberal advocates in the pro-life movement gone?

Evangelicals and the Pro-Life Movement

Williams shows the complicated relationship between evangelicals and the pro-life movement in significant ways. On the one hand, evangelicals infused the movement with a zeal and energy that aligned with the surging Religious Right. On the other, they redirected some of the ideological underpinnings of the movement as it shifted away from a human rights question to a moral one.

It’s become commonplace to hear that evangelicals were absent from the pro-life movement prior to the Roe v. Wade decision in 1973. As Williams notes, that’s a bit overstated. While the movement’s center of leadership was not yet within evangelicalism, there had been a significant influx of evangelicals, particularly in the years immediately preceding the Supreme Court’s ruling. There was a subtle difference in emphasis, however, as these evangelicals tied their pro-life advocacy to a broader anxiety about declining morals in American life. For example, Williams notes Carl F. H. Henry’s connection between “easy abortion and sexual promiscuity” in 1971 (145).

On this point, I do wonder if Williams has artificially drawn the lines too sharply. While evangelicals had made peace with contraception long before, their insistence that abortion was part of a broader moral decline wasn’t necessarily in contrast with a Roman Catholic emphasis on human rights.

What’s clear is evangelicals generally pushed the movement toward a more self-consciously political conservatism, embedded within the center of the Republican Party. And though this mobilized broad support from many white evangelicals who increasingly identified with the GOP’s rightward turn, it risked marginalizing other allies.

While the Democratic Party has been unwelcoming to pro-life voices, the pro-life movement has had a parallel danger. Have we made the defense of the unborn part of a package deal that must be purchased alongside specific positions on education, healthcare, military spending, and gun control? Evangelicals have given significant energy and power to the pro-life movement. But we should also ask if we’ve limited its effectiveness by requiring a monolithic political ideology (one our Roman Catholic allies seem far less insistent on).

One of the most significant contributions of Williams’s work is how he chronicles the shift in liberal political ideology during the 1960s and 1970s. Gradually, the liberal ideal of government policies designed “to uphold the two-parent nuclear family headed by a male breadwinner” gave way to a new individualistic “rights-based liberalism” (181–82).

Williams’s argument pairs nicely with Robert Self’s recent work and underscores the significant role this shift played in redirecting the orientation of Democratic politics. But Williams astutely connects this to a number of prominent Democratic figures’ rapid abandonment of the pro-life cause. From Ted Kennedy and Jesse Jackson to Al Gore and Dick Gebhart, prominent Democrats who’d once supported pro-life measures now changed their positions, and often dramatically. The Democratic Party increasingly signaled to its own that anything but full adherence to pro-choice orthodoxy would be deemed out of bounds. 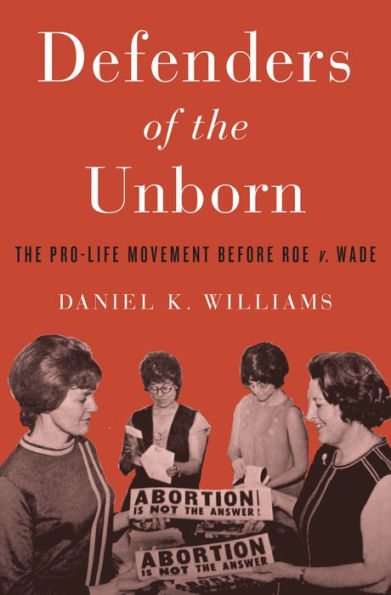 Defenders of the Unborn: The Pro-Life Movement Before Roe v. Wade

Defenders of the Unborn: The Pro-Life Movement Before Roe v. Wade

On April 16, 1972, ten thousand people gathered in Central Park to protest New York’s liberal abortion law. Emotions ran high, reflecting the nation’s extreme polarization over abortion. Yet the divisions did not fall neatly along partisan or religious lines-the assembled protesters were far from a bunch of fire-breathing culture warriors. In Defenders of the Unborn, Daniel K. Williams reveals the hidden history of the pro-life movement in America, showing that a cause that many see as reactionary and anti-feminist began as a liberal crusade for human rights.

This is essential, for it gets to the center of Williams’s argument. If he’s right—and he makes a remarkably strong case—then our popular understanding of the pro-life movement as a reaction to Roe v. Wade or surging feminism is inaccurate. While those pressures shaped the movement, it goes much further back and was actually rooted in a rather liberal vision of human rights. As evangelicals look to the future, we would do well to learn from this past. Even now, I find millennial evangelicals to be wonderfully committed to the defense of human life at all stages of development, and they increasingly do so out of a commitment to certain first principles grounded in the image of God and human flourishing.

Without question Defenders of the Unborn will become essential reading for any historian working in the area of political movements, political realignment, and the intersection of religion and politics.

But the strength of Williams’s prose and the significance of the subject also make it helpful reading for anyone interested in understanding the complicated history of the pro-life movement. Perhaps it might even spark constructive dialogue among those of us who identify as pro-life advocates, but are eager to see how a comprehensive pro-life worldview might call us to renewed care for the most weak and vulnerable among us.

Matthew J. Hall (PhD, University of Kentucky) is provost, senior vice president for academic administration, and associate professor of church history at The Southern Baptist Theological Seminary. He is co-editor of Essential Evangelicalism: The Enduring Legacy of Carl F. H. Henry (Crossway, 2015). You can follow him on Twitter.