My guess, based on dozens of conversations with friends, is that when you heard Rick Warren, pastor of Saddleback Church and author of the bestselling The Purpose Driven Life, had written a diet book titled The Daniel Plan, one of the following questions came to mind. And even if you didn’t have these questions, considering them will give you an entrée into Warren’s latest offering.

Rick Warren and the Prophet Daniel

(1) What business does Rick Warren have writing a diet book?

Though some ask this honestly and humbly, the inquiry is sometimes laced with incredulity. “Shouldn’t pastors stick to theology,” the skeptic postulates, “and leave the diet books to the experts in the fields of nutrition and exercise physiology?”

Fair enough, but if this question came to your mind, it would be helpful to realize Warren didn’t write this book solo. He’ll get all the credit from those in evangelical circles because of his fame, but he enlisted the help of several experts in the relevant fields for putting the book together.

When others ask this question, they’re not so concerned about a general theological approach to health as they are about Warren specifically. Without meaning to be unkind or judgmental, they might simply wonder, “Isn’t Warren a bit overweight to write something like this?” Warren acknowledges this might be a common response, and brings it up himself at the beginning of the book. He would actually agree with the charge he was severely unhealthy, but this is exactly what prompted him to launch The Daniel Plan in the first place.

His inspiration came during a baptism service at Saddleback Church when more than 800 members were baptized. After personally lifting more than 145,000 pounds of soggy church member, Warren had an epiphany: “Everybody’s fat!” (13; cf. TIME interview). It simultaneously struck him that he wasn’t exempted from this observation; he was physically unhealthy as well, setting a bad example for his congregation. 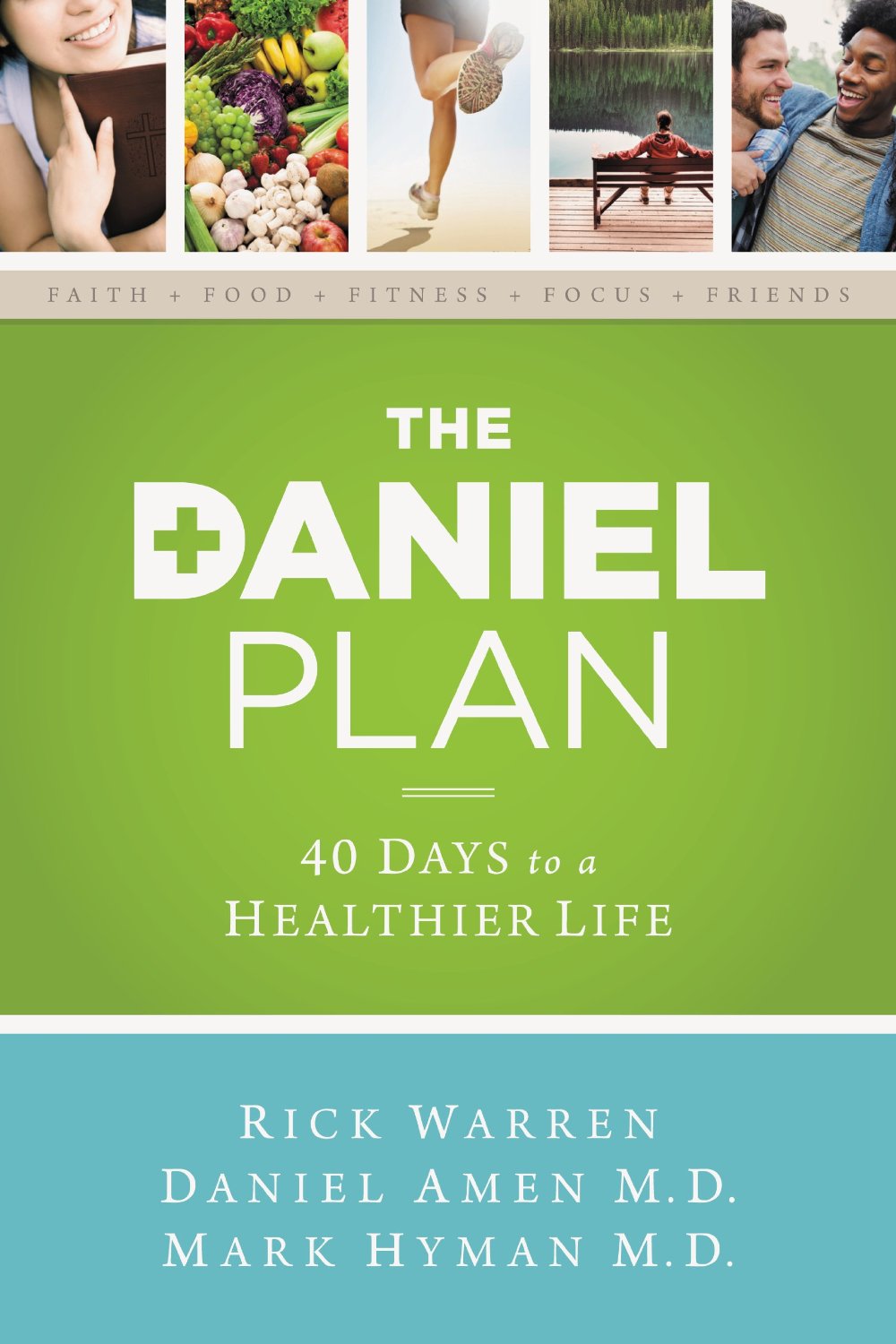 The Daniel Plan: 40 Days to a Healthier Life

The Daniel Plan: 40 Days to a Healthier Life

He stood before his church, confessed his poor stewardship, and invited Saddleback to join him in getting fit. Warren assembled a crack squad of elite nutritionists, doctors, and exercise physiologists to help put this plan together. To his surprise, more than 12,000 church members joined the cause that Sunday, and they collectively lost over 250,000 pounds in the first year.

(2) What business does the prophet Daniel have speaking to us about diet and fitness?

How did all of those folks at Saddleback lose so much weight? Did they do so by adopting the dietary convictions of a Jewish exile in Babylonian territory six centuries before Christ? Is this what Warren’s advocating? Isn’t that a bit extreme? Besides, as astute Bible students will point out, Daniel actually gained weight. Isn’t that a rather ironic title for a newfangled wellness plan?

Though Daniel did consume a meager diet of veggies and water, The Daniel Plan is named more for the prophet’s overall character than for his meal plan:

Daniel possessed strength that went well beyond the size of his muscles. He had a strength of faith, courage, obedience, devotion, dedication, endurance, and discipline in body, mind, and spirit. . . . Daniel demonstrated his pursuit of excellence in his faithfulness in doing the little things when no one was watching. He had strength to do what was honoring to God, what was right, even in the face of danger or conflict or against what everyone else was doing. (150)

The Daniel Plan, according to the authors, has little to do with eating as Daniel would have eaten. It’s not, in that sense, a Christian capitalization on the Paleo Diet craze (at least not explicitly so). Instead, the reader is encouraged to be “Daniel Strong,” making difficult decisions to holistically improve one’s overall health.

So, does The Daniel Plan (TDP) succeed at what it sets out to do? As Christians, how shall we then diet? Does Warren give us any clarity? Let’s consider this from two angles.

The Food, Fitness, and Focus sections are incredibly helpful. The authors make it abundantly clear that TDP is not a quick fix but rather about developing habitual healthy lifestyle choices. They also rightly emphasize that exercise and nutrition are about health, not weight.

Real food has the power to give your life back and more fully engage in the purpose for your life. The reason to do it is not to fit in your jeans or look good in a dress, but to be awake to the beauty and miracle of life, to be able to live with purpose, to love, serve, connect, and celebrate the gifts God has given you. (77)

The goal of TDP, therefore, is not to be labeled skinny by our current social standards, but to pursue proper health as a matter of stewardship.

TDP itself is a high carbohydrate diet as long as those carbs are primarily from fruits and vegetables, and other whole, fresh, and unprocessed sources. In essence, the counsel is to eat real food and not non-food. The book is full of pithy tips for how to discern the real from the dangerous. For example: “If it was grown on a plant, eat it. If it was made in a plant, leave it on the shelf” (38).

They provide a trajectory for a proper diet that is attainable and manageable, attacking the myth that eating healthy is money- and time-consuming, providing diagrams for “the perfect plate” at each meal, striking a balance that warns against sweets without rigidly outlawing them, encouraging appropriate exercise routines while reminding us we can’t exercise our way out of a bad diet, and providing thorough appendices that include meal plans and sample recipes.

This is a more difficult question to answer, since it’s tough to say what would constitute a “Christian” diet as opposed to a non-Christian one. After all, the Bible says little to nothing about what one should eat or the exercise program one should adopt. In another sense, though, Scripture has a great deal to say about the topic if we rightly consider a theology of the body.

In the introductory chapter Warren provides a brief section on what the Bible has to say about our bodies, which is an essential perspective. But when we get to the Faith section the emphasis takes more of an “only God can bring lasting change” approach. This is problematic from a health perspective as well as from a biblical perspective.

First, it’s problematic from a health perspective since it leaves the reader wondering if only Christians can successfully diet while unbelievers are left to languish physically. Consider the following:

[God’s power] is what makes The Daniel Plan different from other approaches. It is built on trusting in God’s power to help you change, not merely your own willpower. . . . In The Daniel Plan you will learn . . . the power of God’s Spirit inside you, helping you to make the changes God wants you to make and you want to make. (21)

Throughout The Daniel Plan, we do our best to explain why—both biblically and scientifically—we are making certain recommendations. But in the end, it will come down to your relationship with God and the health of your faith. (35)

Some of these statements are head-scratchers to say the least. Propping up this diet plan as faith-based is confusing on multiple fronts. It’s confusing when one considers whether non-Christians can hope to enjoy good health, but it’s also confusing in that it may overstate the role one’s faith in Christ plays in one’s physical health. It’s not that the two are entirely unrelated; they’re just not related in a way that would suggest a faith-based diet plan has a leg up on the competition.

Moreover, this close association of faith and fitness could be dangerous for someone who buys in wholesale, fails at getting healthy, and then has a crisis of faith: “I’m overweight because I didn’t believe hard enough. My faith is weak.” This burden doesn’t seem to be one Warren intends to put on anyone, but it could be an unintended consequence given how much talk there is of faith being the key to successfully dieting.

Second, the approach of TDP is problematic from a biblical perspective. Scripture is imported to the realm of fitness to validate things its verses were never meant to validate. For example, Warren argues Romans 12:1–2 is a reminder for us to commit our bodies to the Lord in our pursuit of fitness, and then again to show we need to change the way we think if we want lasting health change (17, 25). Galatians 6:9 is a prompt to not grow weary in our pursuit of healthy living (49). Ephesians 3:20 is quoted after—and in support of—the assertion “God can make changes in your life that you have never dared to even dream of. He specializes in miracle makeovers” (49). Matthew 18:20 is marshaled in favor of having a team of friends go through TDP with you (47–48). Philippians 2:13 is about God empowering you to make healthy choices (25). Ephesians 4:22–24 is about the old (unhealthy) self being put off while the new self is put on as you make healthy choices (24–25). And so on.

Warren says that this faith section helps make up the “secret sauce” of TDP (16), but ironically it’s that same sauce that left a funky taste in my mouth.

Diet books are a dime a dozen. And “Christian” diet books seem to be more of the same with some niche marketing thrown in. So, should you read The Daniel Plan? If you’re a pastor, should you encourage your congregation to read it, discourage them from reading it, or remain somewhere in the middle of the road?

I’m personally in the middle of the road. At the end of the day, as a pastor, I wouldn’t object to a group of church members reading TDP and pursuing healthy living together. In fact, I’d encourage them in their pursuit of physical health. We as Christians should be good stewards of our bodies, and this book could be a helpful piece of the puzzle for those looking to be more faithful in this area. Pastorally, The Daniel Plan could be a useful tool in one’s discipleship repertoire when helping another practically apply stewardship principles to real life. However, even in my encouragement I’d provide a few disclaimers to help with Warren’s section on Faith—it’s good on health, bad on hermeneutics.

Jason Seville (ThM) is an associate pastor at Del Ray Baptist Church in Alexandria, Virginia. He and his wife, Kim, have five children. You can follow him on Twitter.