There’s a classic scene in the 1997 film Men in Black that comes to mind as I think about the problems of fake news and disinformation and the solutions that Jonathan Rauch proposes in his book The Constitution of Knowledge: A Defense of Truth. Government Agent K (Tommy Lee Jones) is explaining to Agent J (Will Smith) what their work of concealing and controlling alien life entails. At one point, K takes J to a newsstand and selects a stack of tabloids—the sensational publications that talk about children being born with three heads and why Elvis is still alive and performing in Wichita. “Best investigative reporting on the planet,” K says. “Read the New York Times if you want, they get lucky sometimes.”

This is not just an exquisitely funny line; it’s a fitting metaphor for how a lot of people feel about the universe they actually live in. Where do we go for facts? Is there an objective answer to that question, or does it depend entirely on your worldview? Do people who think they know read one paper, and people who actually know read another? In contemporary Western culture, these aren’t just plotlines in a sci-fi summer blockbuster; they’re the questions attending a social crisis. There may not be a government agency to run customs for extraterrestrials immigrating to earth, but it certainly feels as if we’re not sure what to read or believe anymore.

Jonathan Rauch, senior fellow at the Brookings Institution and a contributing writer at The Atlantic, argues that it’s time for this social crisis to end. What we need, Rauch says, is to recover a social compact that identifies, protects, and promotes the objectively true. The community that shapes and safeguards this compact is known as the “reality-based community,” thick networks of people committed to the pursuit and promulgation of evidence-based facts. Rauch writes that this community possesses “a shared understanding that there are right and wrong ways to make knowledge” (5). Out of this reality-based community emerges a Constitution of Knowledge, a foundational agreement held onto by institutions responsible for educating the public, which conditions public discourse. 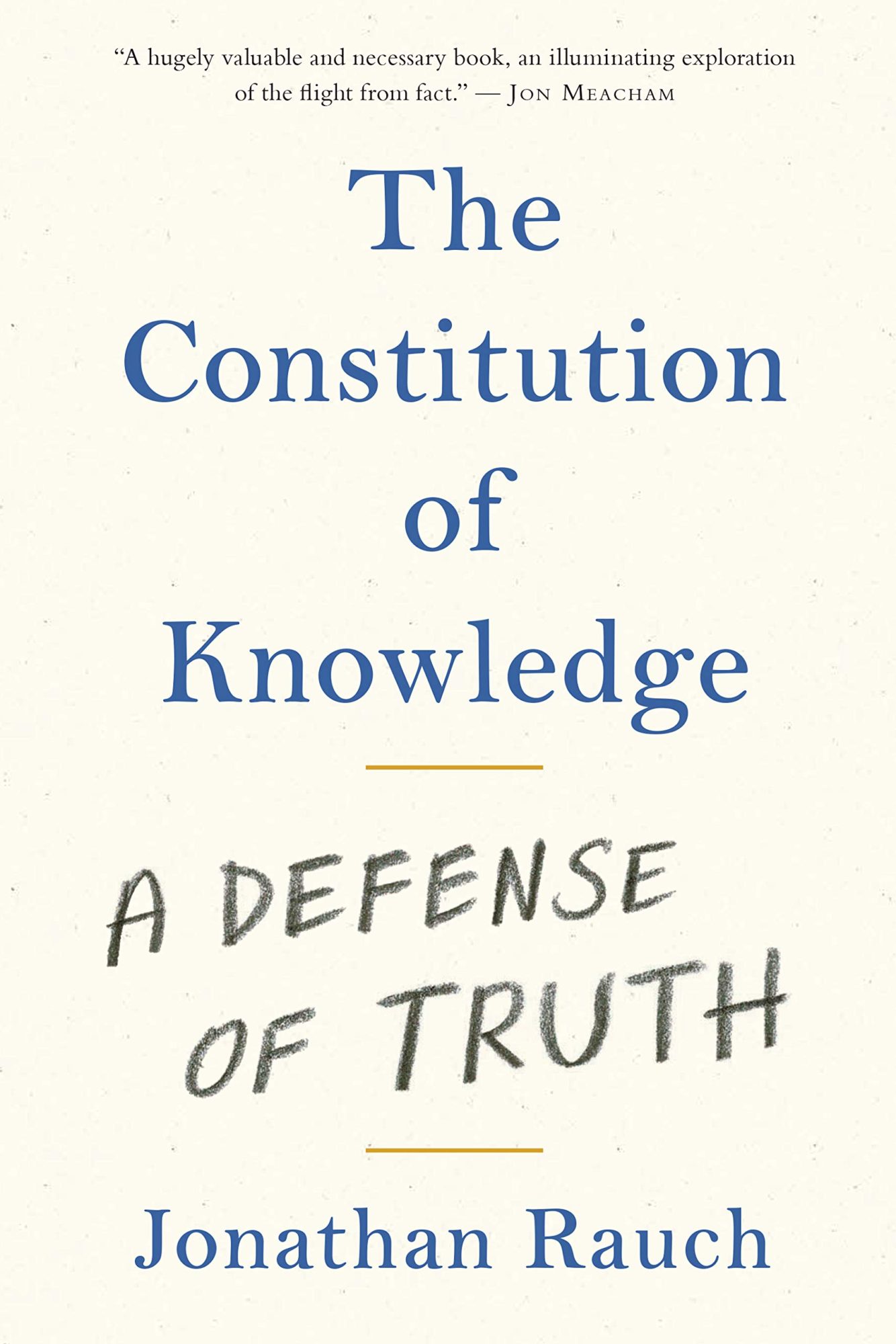 The Constitution of Knowledge: A Defense of Truth

The Constitution of Knowledge: A Defense of Truth

Disinformation. Trolling. Conspiracies. Social media pile-ons. Campus intolerance. On the surface, these recent additions to our daily vocabulary appear to have little in common. But together, they are driving an epistemic crisis: a multi-front challenge to America’s ability to distinguish fact from fiction and elevate truth above falsehood.

In this pathbreaking book, Jonathan Rauch reaches back to the parallel eighteenth-century developments of liberal democracy and science to explain what he calls the “Constitution of Knowledge”—our social system for turning disagreement into truth.

By explicating the Constitution of Knowledge and probing the war on reality, Rauch arms defenders of truth with a clearer understanding of what they must protect, why they must do—and how they can do it. His book is a sweeping and readable description of how every American can help defend objective truth and free inquiry from threats as far away as Russia and as close as the cellphone.

According to Rauch, this community exists in every serious intellectual discipline and serves the cause of truth by consistently holding their work and other members accountable to “reality-based” standards of knowledge. It descends directly from the Enlightenment’s recovery of empiricism. Leaning heavily on the American philosopher Charles Sanders Peirce and his “pragmaticism,” Rauch contends that what separates fake knowledge from real knowledge is the principle of falsification. The reality-based community, Rauch says, doesn’t admit any claim that cannot ultimately persuade all willing to reason far enough. “The reality-based network behaves like an ecosystem,” says Rauch, “producing a body of validated propositions whose composition humans can influence but not control. That is objective reality, insofar as we can know reality” (87).

It certainly feels as if we’re not sure what to read or believe anymore.

A Constitution of Knowledge would thus protect speech, filter out bad-faith actors, and prevent privileged claims to truth. The question is: Who can we trust to bring this about? Rauch’s book is really a manifesto about the reality-based community, because it’s the community that, in Rauch’s vision, holds the keys to the epistemological kingdom. It’s the community that’s responsible for adhering to and defending objectivity, fallibilism (anyone can be wrong), disconfirmation, and other bedrock epistemological commitments.

Rauch’s reality-based community achieves genuinely good things. In his telling, it stands firmly against the tyranny of the internet’s dilution of authority, refusing to allow partisan commitments or profitable clickbait to obscure what’s true. It is also the last line of defense against cancel culture, which targets people for harassment and punishment based solely on their unpopular or counterintuitive viewpoints.

As an impassioned argument against negative epistemology and groupthink, Rauch’s book can be compelling and persuasive, stimulating hope that a future beyond both algorithm and elitism is possible.

The problem with The Constitution of Knowledge is not its identification of our crises, but its proposed strategies to solve them. Rauch’s identification of pragmatism as the essence of a healthy epistemological marketplace suffers from a profound failure of imagination; he does not seem either aware or concerned that the most fundamental questions of truth, goodness, and beauty are controversial precisely because they cannot be adjudicated by the reality-based community. Indeed, his term “reality-based” turns out to be a misnomer.

Further, Rauch’s emphasis on credentialism and the importance of expert consensus as the gatekeeper of public knowledge portrays him as significantly out of touch with current events and the crisis not merely of public trust but of institutional integrity.

Pragmatism Is Not Enough

Rauch describes the victories of the reality-based community as victories for empiricism against dogmatism. According to Rauch, the core values of the reality-based community exclude, by definition, any place for God, the miraculous, or the transcendent. Rauch seems aware of this implication and tries to head it off by proposing a fact versus truth dichotomy. Truth is a moral substance that can differ from person to person; everyone is free to “tell their truth.” By contrast, facts are statements about reality that can and must be judged by the nine epistemic commitments. According to Rauch, to leave the house for work in the morning is to leave the realm of truth and enter the domain of facts.

By analogy, the U.S. Constitution sets the rules for America’s national government, but it does not lay down the rules for running our families, teaching our children, organizing our communities, or doing our jobs; it merely asks us to behave in ways which support rather than undermine the Constitution’s ability to do its job. . . . In the same way, the Constitution of Knowledge creates an epistemic frame within which individuals can freely and safely hold many kinds of personal beliefs. (115)

There are fatal problems with Rauch’s approach. The first problem is that it’s been tried before. Anyone who’s read biologist Stephen Jay Gould’s famous argument for science and religion as “non-overlapping magisteria” should recognize the same sentiment in Rauch’s vision of the reality-based community. Gould’s atheistic but relatively respectful book Rocks of Ages: Science and Religion in the Fullness of Life was published in 1999. How well did his argument do? Seven years later in 2006, Richard Dawkins published The God Delusion, a book that arguably did more than any other to mainstream animus against even private religious belief.

What Dawkins understands that Gould and Rauch don’t is that the claims of religious revelation don’t allow themselves to be kenneled off in a pious corner, away from the rest of existence. Relegating religion to the margins of intellectual life is untenable, even if you do it with a smile.

Relegating religion to the margins of intellectual life is untenable, even if you do it with a smile.

Rauch’s fact versus truth dichotomy is neither philosophically sound nor politically viable. When Rauch says that the U.S. Constitution allows those under it “many kinds of personal beliefs,” he’s right, but Rauch says this is because the Constitution refuses to tell people what values they need to accept privately. This is manifestly not true. Political systems are not merely networks of efficiency; they reflect convictions, such as belief in the inherent fallenness of man (therefore division of powers), the necessity of controlling evil (therefore mechanisms of enforcement), the goodness of fairness and impartiality (therefore courts of law), and, in the American case, the divine image on every human person (therefore an inalienable right to life, liberty, and happiness). None of these beliefs are empirically verifiable. They are philosophical, religious, and, according to Rauch’s own epistemic categories, inadmissible as knowledge.

Credentialism Is Not Enough

The second massive problem with Rauch’s argument is that it’s strangely silent on the potential for the reality-based community to succumb to unreality. It’s likely that most of Rauch’s book was written before the global COVID-19 pandemic, but the absence of any meaningful discussion of how public health officials have struggled to lead or enlighten citizens for the last two years is truly astonishing.

Our epistemological crisis of my facts versus your facts is the inevitable consequence of secularization.

As numerous commentators have pointed out, the pandemic has often been a showcase of failure for the kind of institutions and credentialism that Rauch extols. While Rauch may be right that a credential-shaped public knowledge market is ultimately self-correcting, the costs of such self-correction do not figure into his thinking whatsoever.

Men in Black ends with a twist: Agent K, tired of years spent in secrecy and solitude, asks Agent J to erase his memory. The only way to have the life he wants is to forget what he knows is true. I can’t help but think Western society is like this. In order to actualize our autonomy and sense of expressive individualism, we must forget the things about reality that tether us to something greater. But those lost memories must be replaced. Our epistemological crisis of my facts versus your facts is the inevitable consequence of secularization.

Jonathan Rauch is right to sound the alarm about the state of truth in our age. But his reality-based community is a pragmatist’s deus ex machina. The most important things standing between contemporary society and a robust confidence in truth are things that no scientific or technocratic strategy will move, and the loss of public trust in our expert sector is not merely the result of Donald Trump or Twitter. A pragmatic absence of moral reasoning dooms The Constitution of Knowledge to become yet another verbose attempt to find truth without a truth-giver.