Our society has struggled the past few years to come to a meaningful consensus on the nature and limits of marriage. While the Supreme Court’s decisions this coming June on four new cases will clarify the legal status of the institution, the only thing everyone agrees on is that the public dispute will carry on.

Traditional Christians aren’t going away anytime soon, and even if the question of how the state should regulate marriage (if at all) ceases to be a live one for our political debates, it will remain a test case for Christians aiming to understand how the church and world should intersect.

Building on What Is Marriage?

Few academics have attained Robert George’s prominence for his work defending a broadly traditional account of marriage and its goods. What Is Marriage? [review], which the Princeton philosopher and commentator co-authored with Sherif Girgis and Ryan Anderson, has been perhaps the single most widely read conservative critique of same-sex marriage. In Conjugal Union: What Marriage Is and Why It Matters, George returns to the subject with another collaborator, Patrick Lee, a partner he’s worked with before. Even though the central arguments of the two books are nearly identical, What Is Marriage? was written (in part) for non-specialist audiences and limited in its scope, whereas Conjugal Union addresses more technical specifics and adds dimensions missing in the earlier work. Readers looking to better understand What Is Marriage? and to see the view’s ramifications on other questions would do well to patiently work through the arguments presented in Conjugal Union.

What Is Marriage? can be credited for reviving natural law arguments about the nature of marriage within the public square as well as the evangelical world. Yet not all natural law theories are identical, and many unique specifics and presuppositions were understandably omitted from the book. In Conjugal Union, Lee and George fill that gap, situating their account of marriage and sexual ethics within the broader question of the “natural law” and how we come to know its norms.

Basic Good for All

Their work in this section isn’t entirely new, nor is it uncontroversial. Lee (professor of bioethics at the Franciscan University of Steubenville in Ohio) and George (professor of jurisprudence at Princeton University) are members of the “new natural law” school that Germain Grisez, John Finnis, and others have been advocating for the past 30 years. On their view, conclusions about many moral questions can be had “independently of one’s acceptance of God’s existence or of divine revelation,” a claim that many evangelicals may find uncomfortable but that deserves careful consideration (15). Such conclusions aren’t derived from the structure of human nature per se: we cannot simply read off how we should act in our sexual lives, for instance, from the structure of human bodies. The moral nature of marriage, in other words, demands a much more sophisticated account than simply saying “the parts don’t fit.” Instead, moral goodness or badness is a matter of choices related to various “basic goods” we come to know by reflecting on the opportunities inherent in human action and the distinctive benefits such actions aim at. That flying sketch leaves out crucial details; the gist, though, is that basic goods provide reasons for action, and such goods—“life and health, understanding, skillful performance, harmony with other people”—are “aspects of true flourishing” and are therefore “worth pursuing and promoting both in ourselves and in others” (26). 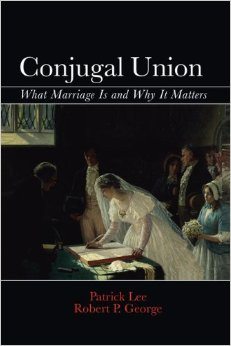 Within this context Lee and George argue marriage is one of these “basic goods,” a community with an objective structure that determines human practical rationality. On their view, marriage is a “union of a man and a woman formed by their commitment to share their lives—physically (including sexually), emotionally, and spiritually—in the kind of community that would be fulfilled by conceiving and rearing children together” (41). In the sexual union such a commitment is made real, for “sexual intercourse is a unitary action in which the male and the female complete one another and become biologically one, a single organism with respect to [procreation] (though, of course, not with respect to others)” (45). Interestingly, their account of marriage entails that permanence and exclusivity are properties of it, rather than what defines its essence. They recognize that how those properties are practiced in any society will vary, but the variability doesn’t itself necessarily alter the essential structure of marriage.

Readers of What Is Marriage? who work through the argument will be familiar with many of its aspects. However, they will be rewarded with not only a more robust understanding of the view but also a far more expansive account of its implications for sexual ethics. Lee and George consider why their understanding of marriage entails that non-marital sex acts, such as autoeroticism, sodomy, and sex before marriage, are wrong. At the heart of their argument is the claim that coitus—and coitus alone—unites a couple in such a way that they “participate in a single biological function,” namely procreation, which is the “actualization of that community we know as marriage” (45).

Of course, not everyone sees their marriage this way. In order to properly or fully actualize their marriage in coitus, the participants must “intend this act as an expression of their communion” (70). And that claim stands beneath the wrongness of non-marital sex acts. Any willingness to have sex with someone else undermines the marital quality of one’s actual sex acts within a marriage (unless it’s repented of), because it alters the quality of a person’s will with respect to the good of marriage.

What About Infertile Couples?

Like What Is Marriage?, Lee and George’s book carefully considers what has become known as the “sterility objection,” which suggests that their view entails that sexual acts of infertile couples cannot be marital. Their response emphasizes that coitus begins a biological process that extends beyond our direct voluntary control. And how this biological process interfaces with what the agents intend is crucially important: “The biological identity of the action [as reproductive] makes it possible for one to choose to embody in this act the multileveled, marital union” (89). Coitus isn’t moral because it inaugurates a reproductive process: rather, that process provides the conditions wherein the good of marriage might be pursued (or, as in the cases of extramarital sex or the willingness to have it, rejected).

Lee and George close the book with a discussion of marriage’s legal dimensions, and here they also included helpful expansions. They masterfully critique the no-fault divorce regime in addition to same-sex marriage laws. This is a welcome expansion to the standard conservative arguments against same-sex marriage, and demonstrates the kind of consistent reform we should consider pursuing. Some might call such interests quixotic; it’s much better to think of them as principled stands that expand our political imaginations about the shape of the common good.

Yet while Conjugal Union is a carefully argued book, it left me with lingering questions. It’s difficult to find daylight between What Is Marriage? and Conjugal Union on the substantive arguments about marriage’s basis and shape. And the similarity in no way commits Girgis and Anderson to the claims made in Conjugal Union. But unfortunately, Lee and George don’t clarify where they agree or depart from other statements of their view, and why. Most of the time this is okay. But What Is Marriage? insisted that their defense of marriage could be bracketed from the question of the “morality of homosexual acts or their heterosexual counterparts” (10). Given that the two accounts of marriage are nearly identical, the point of such bracketing is not clear. Presumably anyone who buys What Is Marriage?’s argument about the institution will have to swallow the morality expressed in Conjugal Union as well.

And that raises another key question. What Is Marriage? has gained widespread acceptance and approval in evangelical quarters. (In reviewing a book on homosexuality, one prominent evangelical theologian expressed his desire that I incorporate the arguments of the book.) Yet it’s not clear to me many evangelicals have considered what this view might entail. Lee and George don’t directly address the question of how contraception affects the meaning of sexual acts. However, they do argue against sexual acts ordered toward pleasure alone, suggesting the “organic union . . . that is suited to embodying a multilevel union oriented toward procreating and rearing children together” is a “profound significance” independent of our choice in sex. As such, it seems contraception eviscerates this profound significance and isn’t simply a choice against life (as John Finnis argued), but an action against the marriage as well. Adopting their account may prompt evangelicals to rethink their views on contraception. Evangelicals reading Conjugal Union should at least be sensitive to all that adopting the argument might commit them to.

Finally, I was left with a question that’s almost certainly due to my own shortcomings rather than theirs. For Lee and George, infertile and fertile couples can perform the exact same act, with identical intentions if the infertile couple doesn’t know they’re infertile. However, they suggest an act cannot be “intentionally (i.e., by conscious will) oriented toward an end if one knows that the end is impossible for attainment” (86). In other words, the couple who knows they’re infertile cannot meaningfully intend the procreative aspect of coitus, even if they can intend its unitive dimensions in other respects. However, if the procreative aspect of coitus establishes it as the matrix in which its marital significance can be realized, then it seems the knowingly infertile couple cannot intend fully marital acts. And if the morality of such acts are determined by the will (what is chosen), rather than by the biological conditions of what is done, then it seems the authors’ view means that knowingly infertile couples cannot choose to enhance or deepen their marriage in the same way as other couples.

It may be that such an implication is benign; some unions may only imperfectly partake in the fullness of the good of marriage, after all. In fact, on their view Mary and Joseph partake in the good of marriage without engaging in coitus at all. But curiously, in addressing the difficulty of what’s intended in coitus, Lee and George don’t avail themselves of the explanation they give for Mary and Joseph. They believe Mary and Joseph had a “conditional intention” to unite bodily, which suffices for consent to the good of marriage. They don’t specify what the “conditions” must be to satisfy such a constraint. But there may be ways that such a “conditional intention” would be available to knowingly infertile couples as well, which would solve a dilemma implying (to me) that knowingly infertile couples are barred from full participation in marriage, even though deliberately abstinent couples can fully participate.

These are, no doubt, subtle and sophisticated arguments. But in an era when confusion in the church over the meaning of marriage is rampant and confidence in the biblical witness on sexuality is waning, we need such careful arguments. Conjugal Union isn’t a book about the Bible’s view on marriage; it’s a philosophical account that works out the ethical and legal ramifications of a controversial view. But it’s the kind of book that will help us read the Bible and other books better, as it will reward patient and attentive readers with new thoughts on human sexuality.

Conjugal Union is philosophical meat, and even if readers don’t leave satisfied with the meal, they won’t go hungry for reading it.