“With all the division in America today, it’s comforting to know that at least we can all agree on social justice,” said nobody ever.

Given this lightning-rod nature of a topic, one wonders if Thaddeus Williams—associate professor of theology at Biola University—is simply a glutton for punishment (or needs to check his privilege, depending on your belief).

Williams’s new book, Confronting Injustice without Compromising Truth: 12 Questions Christians Should Ask About Social Justice [listen to his Gospelbound interview with Collin Hansen], could also turn out to be a lightning rod, though I pray it will instead spark conversations. He wrote it because he’s convinced that “social justice is one of the most epic and age-defining controversies facing the 21st-century church” (1). 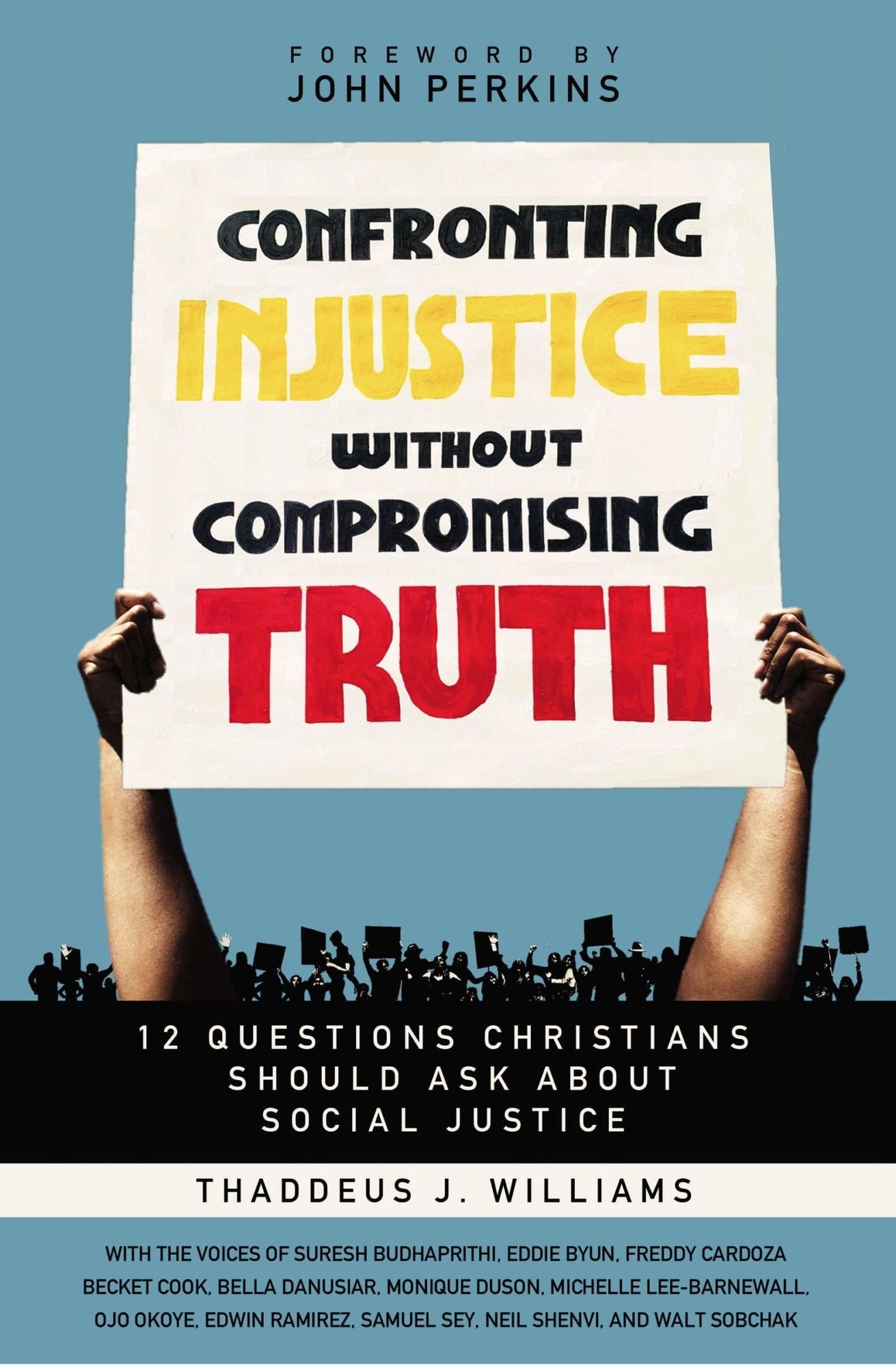 Drawing from a diverse range of theologians, sociologists, artists, and activists, Confronting Injustice without Compromising Truth, by Thaddeus Williams, makes the case that we must be discerning if we are to “truly execute justice” as Scripture commands. Not everything called “social justice” today is compatible with a biblical vision of a better world. The Bible offers hopeful and distinctive answers to deep questions of worship, community, salvation, and knowledge that ought to mark a uniquely Christian pursuit of justice.

Social Justice A follows the traditional understanding of justice as giving others their due. In this sense the phrase is a bit redundant, since all justice is social by its nature (1). But perhaps Williams’s greatest contribution is to remind us that justice is vertical as well as horizontal (15–20). Sin is an injustice against God; glory is “due to his name” and we’ve all failed to give it (Ps. 29:2; 96:8; Rom. 3:23). So it would be socially just for God to send us all to hell, regardless of how otherwise oppressed we might have been on earth.

Perhaps Williams’s greatest contribution is to remind us that justice is vertical as well as horizontal.

Social Justice A sees human identity as fundamentally either fallen in Adam or redeemed in Christ. Because we’re saved by grace alone, we have no room for self-righteous boasting over any other person, regardless of race, class, or gender. Because our fellow men are made in God’s image, it’s a heinous sin to wrong or oppress any of them. This is why practitioners of Social Justice A have historically rescued babies from trash heaps, hidden Jews from Nazis, and abolished slavery and widow-burning—because “God does not suggest, he commands that we do justice” (2; Mic. 6:8; Isa. 58:6).

Social Justice B, however, is what many people think of first. It largely maps to the left in both academia and political activism. It’s associated with names like Ibram X. Kendi, Robin DiAngelo, and the official Black Lives Matter movement. And it’s a philosophy Williams thinks is dangerous both for the church and society.

It’s not that Social Justice B contains no truth, but that it represents a different worldview. God is often marginal or absent. Rather than understanding human beings fundamentally as either sinners in Adam or saints in Christ, it tends to classify people as either oppressed or oppressors (44), often allowing the oppressed to demonize their opponents and avoid self-examination (69).

It’s not that Social Justice B contains no truth, but that it represents a different worldview.

Of course Scripture recognizes that oppression exists, and strongly condemns it. The problem with Social Justice B is that it tends to both unduly expand and oversimplify the definition of oppression. Specifically, it oversimplifies oppression by grouping people into the oppressor/oppressed category based on identity groups like race. Thus not only was Stephanie Wilford oppressed (an elderly, disabled black woman who lamented on camera that the Minneapolis rioters had destroyed her livelihood and left her with no place to go), but, according to Social Justice B, so were the rioters whose lawless actions had terrorized her.

Wilford’s oppressors are lumped into the oppressed category with her, either on the basis of their identity group (race) or the cause for which they were rioting (social justice), leading to a false moral equivalence and an unwillingness to condemn violence. A wiser perspective would recognize it’s possible for the same person to be both oppressed and an oppressor (and truth be told, that describes almost everyone at one point or another), rather than downplaying the moral agency of the oppressed.

It’s possible for the same person to be both oppressed and an oppressor.

According to Williams, Social Justice B also unduly expands the definition of oppression by assuming that basically any statistical disparity in race or sex is proof of racism or sexism. Williams challenges this assumption in his chapter, “The Disparity Question: Does Our Vision of Social Justice Prefer Damning Stories to Undamning Facts?” Of all the chapters, this one is most likely to leave Williams accused of pushing “right-wing politics” (9). But to me it’s probably the most important chapter aside from “The God Question.” I too have noticed that even in the church “Our conversations about ‘racial reconciliation’ often start with unquestioned Social Justice B premises. We assume that disparity is evidence of discrimination. We hear that society is white supremacist and misogynist to its core, and it’s too risky to raise questions” (100).

It feels too risky especially when you’re told that your role is only to listen. I know there are many roadblocks in the evangelical race conversation, but in my judgment this is one of them. And until this assumption is examined and people are free to raise honest questions without fear of being accused of racism, many white people will simply self-censor and the conversation will not proceed.

For a commendable example of honest but charitable discussion on this question, listen to the exchange between Collin Hansen and Kevin DeYoung in the podcast episode “Disagreements About Systematic Racism: How to Approach History, and Recommended Books on Slavery.”

Now if you suspect me of being a middle-class, white, conservative male who subscribes to National Review and almost always votes Republican, then you’re correct. There was confirmation bias going on as I read. So maybe I’m the last person who needs to be reviewing this book.

Having said that, I think it would be unjust to write this book off as a screed for white Republicans. The man who wrote the foreword, John M. Perkins, besides being a civil-rights icon, supported Pro-Life Evangelicals for Biden. George Yancey, a dogged independent whose mutual accountability approach to race discussions has been helpful to me, also endorsed the book. Many of the scholars Williams relies on—whether Coleman Hughes or John McWhorter—are neither conservatives nor Christians.

Williams focuses on persuading the mind rather than ‘owning the libs.’ That alone sets it apart from most of our online echo chambers.

I can promise you, there are plenty of people on the right who won’t like this book—if only because Williams refers to social justice without irony. If you want to categorize this book, I’d suggest laying it alongside books like The Coddling of the American Mind or When Helping Hurts. Rather than appealing to political partisanship, it appeals to reason and evidence, both from the Bible and the social sciences. You may conclude that it’s a flawed appeal, but like the wisdom that comes down from above, it is “gentle and open to reason” (James 3:17) and focuses on persuading the mind rather than “owning the libs.” That alone sets it apart from most of our online echo chambers.

The comparison with When Helping Hurts is a good place to conclude. Because like Steve Corbett and Brian Fikkert, Thaddeus Williams loves the oppressed and wants to help them. He appreciates the good intentions of many Christians trying to fulfill the biblical mandate to do justice. But that is precisely why, like Corbett and Fikkert, he feels compelled to oppose so much of what flies under the banner of social justice. He’s convinced that not only will it not help the oppressed, but it will consume limited time and resources that could’ve been spent really alleviating oppression.

So let’s first do no harm; the only thing worse than hurting the oppressed is doing so in the name of Jesus. Let’s work smart at doing justice as well as working hard. Let us be quick to hear, slow to speak, and cultivate a love that hopes all things. And in all our justice, let us “start with God.” Because as Dr. Perkins observes, “If we don’t start with him first, whatever we’re seeking, it ain’t justice” (xv).