How do Christians thrive spiritually in a visually driven media culture? The irony of this question isn’t lost on me. As you begin reading this review, your attention is being sought after as you interact with the screen. Other outlets are competing to draw you in. You might be receiving dings, alerts, and notifications. And like it or not, you and I are shaped by the diet of our attention. We become whatever spectacle we love most, argues Tony Reinke—communications director for Desiring God—in his new book, Competing Spectacles: Treasuring Christ in the Media Age.

Competing Spectacles reads more like a concise instruction manual than a full-length book, with each of its 33 chapters rarely surpassing more than five pages. Divided into two parts, the first defines the concept of a “spectacle” as well as the various distractions they pose to Christians. Part two casts Christ as the true spectacle all humanity longs for, concluding with a number of points of application.

A spectacle is any kind of projection that grabs human attention. And while spectacles exist outside the virtual world, Reinke largely focuses his treatment on digital media. Perhaps more than any other time in history, images invite us into alternate forms of reality that, as Reinke puts it, make the real world optional. So, it’s not the technology itself that distracts, but the spectacles they portray.

It’s not the technology itself that distracts, but the spectacles they portray.

Several sections of Competing Spectacles cover various forms of media—television, gaming, social media—and the ways they shape how we view ourselves and the world around us. Their effects are readily apparent on a daily basis. Our political views filter through whichever news outlet we choose to consume. Our posture toward our bodies and sex are shaded by the lascivious programming we either consume or avoid. None of these spectacles is neutral. Each bears the potential to lead us down dangerous or edifying paths.

The strength of Reinke’s argument comes from his anthropological grounding. Our spectacle seeking, he contends, exists because we’re made in God’s image. We’re hardwired to long for glory. But all created spectacles fall short of the glory we seek. The only solution to this shortcoming is to make the cross of Christ our greatest spectacle. Through it we’re invited into the glory found in belonging to God.

While the legalistic impulse would be to condemn earthly spectacles outright, Reinke doesn’t do so. In fact, he warns against it. Instead, he helpfully invites Christians to recognize the difference between earthly and heavenly spectacles. Whether they come in the form of video games, sporting events, or the latest superhero blockbuster, they invite us to participate in the glory they promise. The question we must ask ourselves is whether or not we see them for what they are. 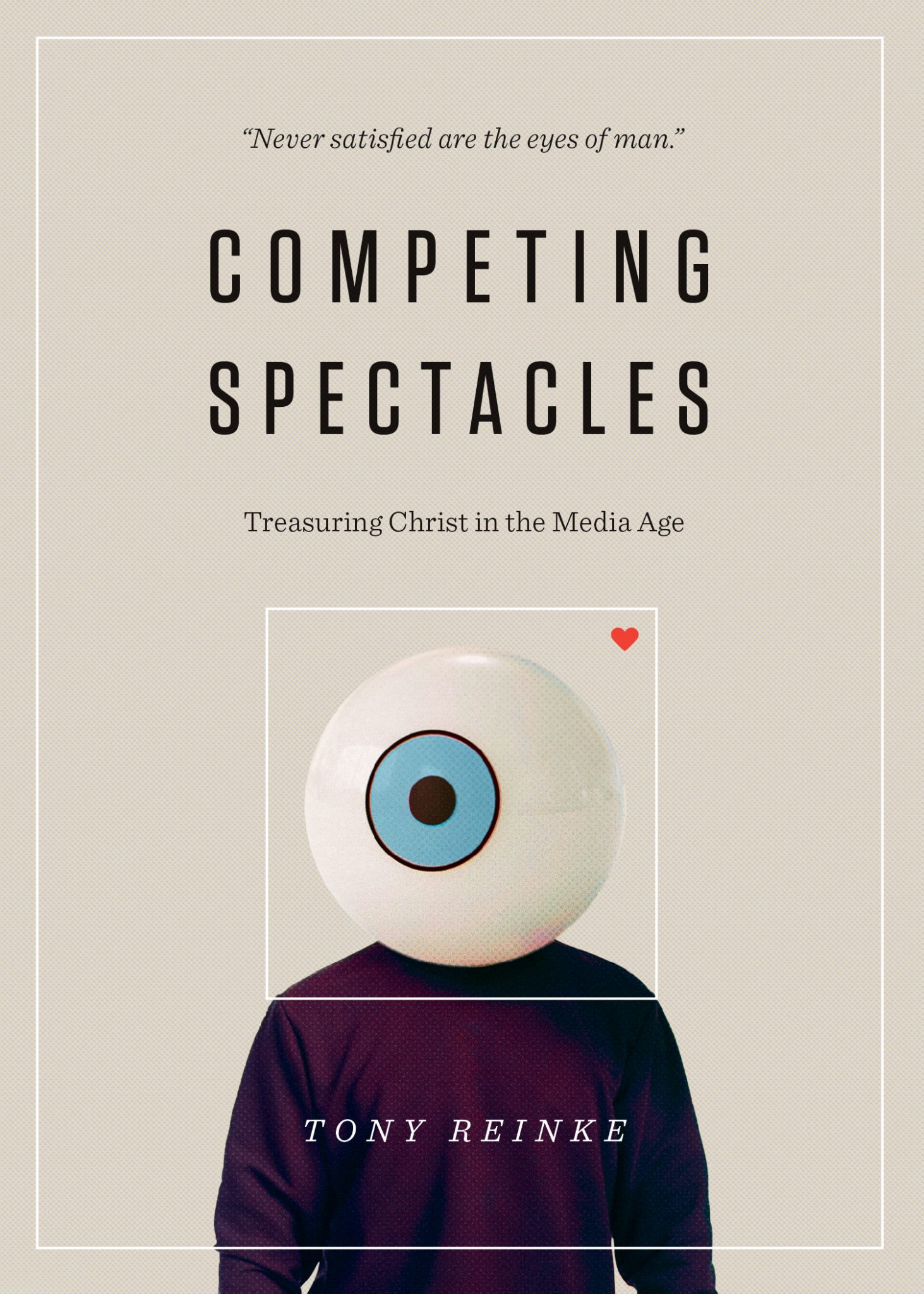 What images should I feed my eyes? We often leave this question unanswered—because we don’t ask it. Maybe we don’t want to ask it. But viral videos, digital images, and other spectacles surround us in every direction—competing for our time, our attention, our lust, and our money. So we let our lazy eyes feed on whatever comes our way. As a result, we never stop to consider the consequences of our visual diet on our habits, desires, and longings. Journalist Tony Reinke asked these hard questions himself—critiquing his own habits—and now invites us along to see what he discovered as he investigated the possibilities and the pitfalls of our image-centered world.

Every year the NCAA caps off its annual basketball season with the “One Shining Moment” montage. For three minutes, viewers are treated to the best moments from that year’s March Madness tournament, culminating in the celebration of its champion. As a fan of the sport, it’s nearly impossible for me to keep from being drawn in, feeling the height of a season of hard work ending in victory. But eventually it fades because it’s only a taste of the ultimate glory we were created to enjoy in Christ. Still, that taste is real and shouldn’t be shunned.

Earthly spectacles offer us a glimpse of the true glory we find in our Creator.

As Reinke writes, “Biblical ethics is not about simply avoiding corrupting things, but learning to see and enjoy and embrace eternal things that truly bring meaning and purpose and joy into our lives.” Asceticism isn’t a reasonable solution, because earthly spectacles offer us a glimpse of the true glory we find in our Creator. If we look closely, we can see his reflection, all the while rejecting what is worthless.

In today’s society, not only are we inundated with screens and images that plead for our attention, we’re also beckoned to embrace pleasure at all costs. In a world broken by sin, pleasure can be a misleading, even dangerous guide. Competing Spectacles is a helpful primer for thinking through how to face a spectacle-obsessed world. It avoids sweeping condemnations of technology in favor of wiser conclusions. We were created to see Christ. He is the spectacle we seek within this earthly theater, and he has made a way for us to thrive, even in a world of competing distractions, when we see them for what they are—shadows of what is to come.