Have you ever read Revelation 21’s description of the new earth and wondered why there’s “no more sea”? I mean, no more pain—I get that. No more death, absolutely! But what’s so bad about the sea? At one level, Sidney Greidanus’s new book, From Chaos to Cosmos: Creation to New Creation, can be seen as one long answer to that question.

From Chaos to Cosmos is the seventh release in Crossway’s “Short Studies in Biblical Theology” series, edited by Dane Ortlund and Miles Van Pelt. The author, Sidney Greidanus, is a former professor at Calvin College and Seminary and a well-known name in biblical theology.

And if you’re not even sure what those terms mean, keep reading.

Chaos, however, is a little more complicated. We usually think of chaos as morally evil, and it certainly can be. In fact, for most of Scripture, it is. But chaos can also refer to the amoral condition of disorder that existed before God began forming and filling his creation on Day One. This is how theologians have traditionally referred to the dark, watery state in Genesis 1:2. Moses describes it this way:

This passage is foundational for the entire book. Greidanus comments:

This verse describes total chaos, piling up five words that will be used later in Scripture either individually or in combination to refer to some forms of chaos: “without form,” “void,” “darkness,” “the deep,” and “the waters.” (29)

These seven words form the basic vocabulary Greidanus uses to find the chaos theme throughout the Bible. At times it may feel like the net is a bit too broad, and that basically anything negative can be labeled “chaos” (and anything positive “cosmos”). But it’s only fair to recognize that almost all the terms in his definition come from one verse at the beginning of the Bible, so he’s not being arbitrary.

It’s also important to note that while all these chaos terms will later take on sinister overtones, “this original chaos was not evil. God created it” (29). In this vein, Greidanus spends a good bit of time contrasting the Bible’s creation story with those of other ancient Near Eastern cultures, whose creation stories similarly feature God battling against a watery chaos, often in the form of sea-gods or sea-monsters. And while Greidanus gladly acknowledges that the biblical authors borrowed language and imagery from neighboring cultures (including language about sea serpents like Leviathan and Rahab), the differences are more significant than the similarities (18–24; 60–63).

According to the ancient Near Eastern myths . . . the Babylonian god Marduk and the Canaanite god Baal both battled for control with the god of the sea (chaos). By contrast, in Genesis 1 God does not struggle with the forces of chaos, nor is chaos considered a god. In fact, in Genesis the primordial waters are not even personified. According to Genesis 1 it was God who created these waters and then, by merely speaking, turned chaos into cosmos. (27)

In short, the Bible begins by stressing the sovereignty of the one true and eternal God. And if he could bring cosmos out of chaos once, there’s no reason he can’t do it again.

Greidanus painstakingly (and often fascinatingly) shows how the biblical storyline after the fall can be read as case after case of God bringing cosmos out of chaos. Sometimes this takes the form of God judging the wicked and saving his people with the same chaotic flood (48). Think Noah in the ark and Israel on the other side of the Red Sea. In both cases God brings cosmos to his people by fighting with the chaotic sea as his instrument (rather than fighting with the chaotic sea as his adversary). This is our sovereign God—the one who killed both our chaotic sins and also his demonic enemies with the same cross (Col. 2:13–15; Heb. 2:14–15).

Chaos is simply no match for the One who “forms light and creates darkness, makes well-being and creates calamity” (Isa. 45:7).

And that’s good news. Because as Greidanus shows, the entrance of sin unleashed a new kind of chaos (35); one that manifests itself in everything from sickness, famine, and death, to drug cartels, hurricanes, and wild animals. All these are graphic illustrations of the deepest, darkest form of chaos—sin itself, with its disordered rejection of God’s loving lordship and embrace of selfish autonomy.

Thankfully, the God who conquered chaos by saying “Let light shine out of darkness” is able to shine in our dark, sinful hearts, bringing new creation life through the same Holy Spirit who brooded over the dark, chaotic waters in the beginning (2 Cor. 4:6; 5:17; Gen. 1:2).

So What About That Sea?

After the fall, just as “darkness” became a metaphor for sin (John 3:19), so the “tossing sea” became a symbol of evil (33)—a dark, dangerous place that swallows up ships, swarms with dangerous monsters, and churns up mire and beasts (Isa. 57:20; Rev. 13:1). It’s no accident that Jesus is described both as light shining in darkness and also as one calming the stormy sea with a word (Matt. 4:16; 8:26). Should it then surprise us that the new creation, the place where there is no more night (Rev. 21:25), is also described as a place where there is no more sea (Rev. 21:1)? 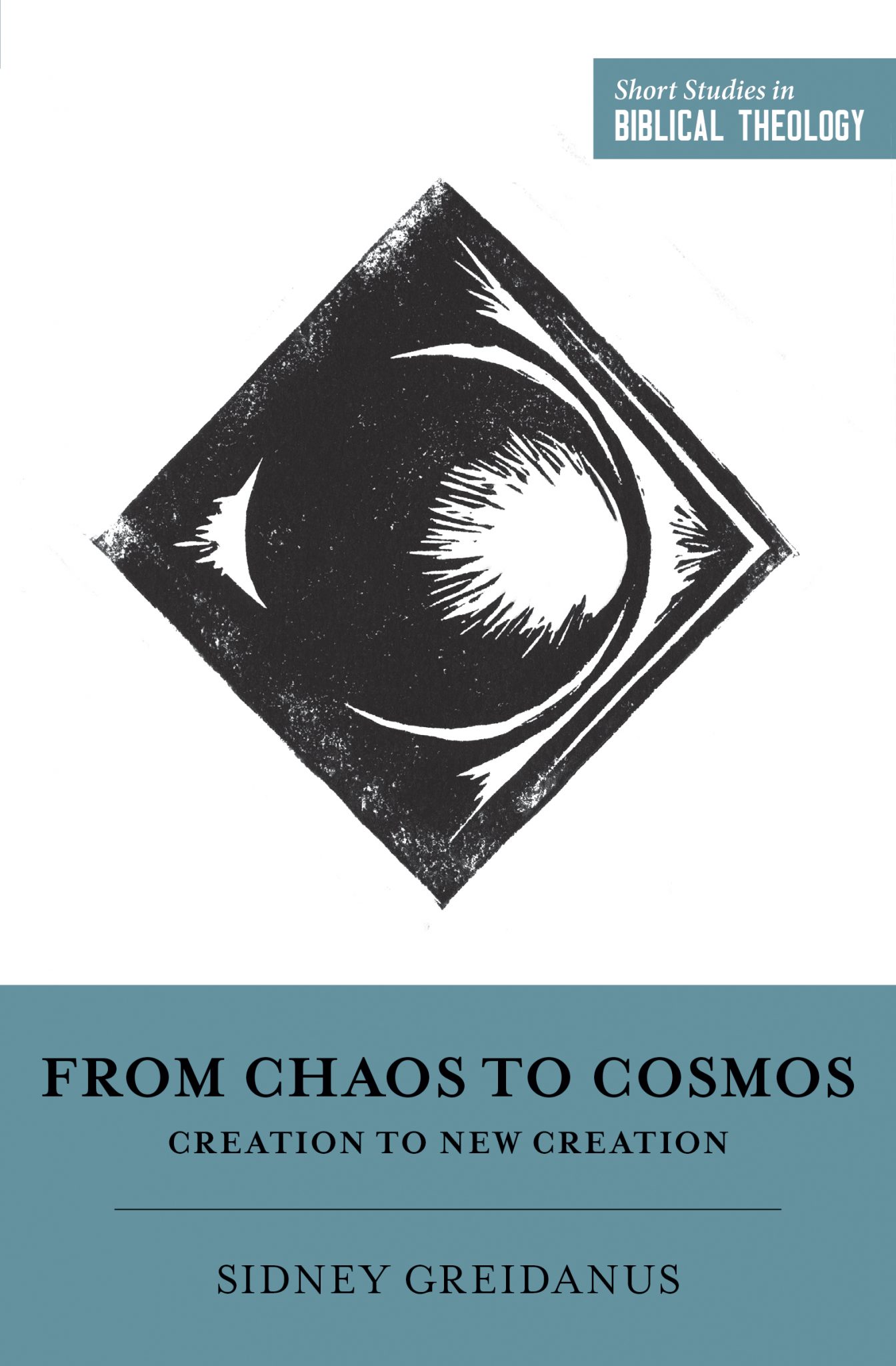 From Chaos to Cosmos: Creation to New Creation

From Chaos to Cosmos: Creation to New Creation

When God created the world, he brought perfect order out of what was “without form and void.” But with human rebellion against God leading to God’s curse, disorder was introduced into creation—disorder that we still see all around us today. Tracing the chaos to cosmos theme from Genesis 1 to Revelation 22, pastor-scholar Sidney Greidanus reveals how God is restoring his creation through Jesus Christ, who has already begun to shine light into the darkness and will one day return to bring peace, order, and restoration once and for all.

For those who think of the sea mainly as a lovely place for recreation, this may seem like bad news. For what it’s worth, however, Greidanus doesn’t think the new earth will be literally bereft of all seas (167). The meaning is in the symbolism. The problem is chaos, not water.

But even with our modern technology, the sea remains a violent force that can’t be tamed. The Boxing Day tsunamis of 2004 killed a quarter of a million people. The massive freighter Edmund Fitzgerald went down with all hands in a Lake Superior storm in 1975. Last year, many Atlantic coast residents were evacuated from their homes due to Hurricanes Florence and Michael.

Events like these remind us that the sea is chaos writ large—a pointer to all the enemies of shalom, a symbol of everything that threatens peace and flourishing, whether it be disease in our bodies, predators in our forests, crime in our streets, or sin in our hearts.

With chaos occurring in so many forms, it’s good to be reminded that one day it’s all going down. The One who once said, “Thus far shall you come, and no farther,” will then say, “Depart from me.” The sea of God’s wrath will fall on our external enemies, the fire of God’s grace will purify us of all internal disorder, and chaos and its perpetrators will be evicted from God’s creation, placed safely outside and sealed off in the cosmic wastebasket of hell, the “ultimate form of chaos” (166).

The result will be a perfect and permanent cosmos. Perhaps there will be no lions at all (Isa. 35:9), or perhaps the lions will eat straw like an ox (Isa. 11:7). Perhaps there will be no sea at all, or perhaps the sea will no longer destroy and drown. But either way the point is the same: nothing will hurt or destroy in all God’s holy mountain (Isa. 11:9). Chaos will be subdued, cosmos will reign, and we will have reached our true home, where we will see God’s face forever. And sea or no sea, that’s something to look forward to.