James Davison Hunter is the Labrosse-Levinson Distinguished Professor of Religion, Culture, and Social Theory at the University of Virginia. Writing as a self-professed Christian (95), Hunter’s work ranges between social theory, history, moral philosophy, and political sociology; in this project, however, he ventures into the realm of theology. In three overarching essays, To Change the World: The Irony, Tragedy, & Possibility of Christianity in the Late Modern World is concerned with the question of how Christians in America engage the late-modern world.

On account of the disparities between his understanding of Christian faith and a range of initiatives actively promoted in the name of Christian engagement, Hunter’s dogmatic slumbers were awakened, eventually leading him to explore how Christians can address the world with theological integrity and in a way that produces genuine transformation.

With special attention to how Christians in America think about the creation mandate, the first essay is concerned with understanding the influence and effect of implicit social theories which underwrite cultural engagement. Hunter contends that this substructure is fundamentally flawed, such that ambitions for world-change are doomed to failure from the start, precisely because they don’t properly understand the nature of culture and how change occurs.

To persuade readers of his thesis, Hunter offers a chapter titled “Evidence in History,” in which he traces 2,000 years of cultural change in terms of ideas, elites, technologies, and institutions. This is followed by a chapter titled “The Cultural Economy of American Christianity,” which explains, among other things, how tendencies such as consumerism, individualism, populism, and managerial ideologies have undermined the Christian movement. Together, these chapters seek to support Hunter’s case that, “Christianity in America is not only marginalized as a culture but it is also a very weak culture” (92). He concludes with the assertion that Christians must rethink their approach to fulfilling the creation mandate, particularly as it relates to power.

The second essay, titled “Rethinking Power,” is an attempt to explicate the implicit view of power maintained by the typical Christian. According to Hunter, the leading edge of this approach almost always involves the instrumentalities of politics, what he calls “political culture” (108-9, 185). By this he means the framework of moral claims and narratives within which attitudes, ideals, actions, and institutions function. In other words, when you consider the question of how societies hold together and pursue change, the expansive cloud of politics fills the horizon to such an extent that it not only influences, but exerts oppressive control over individuals, groups, and institutions. Whether it is higher education, philanthropy, science, the arts, or the ways in which families understand their identity and calling, increasingly, it is in reference to the dictates of the state. Christians, according to Hunter, not only submit to this system, they also exploit it, and do so at great peril. 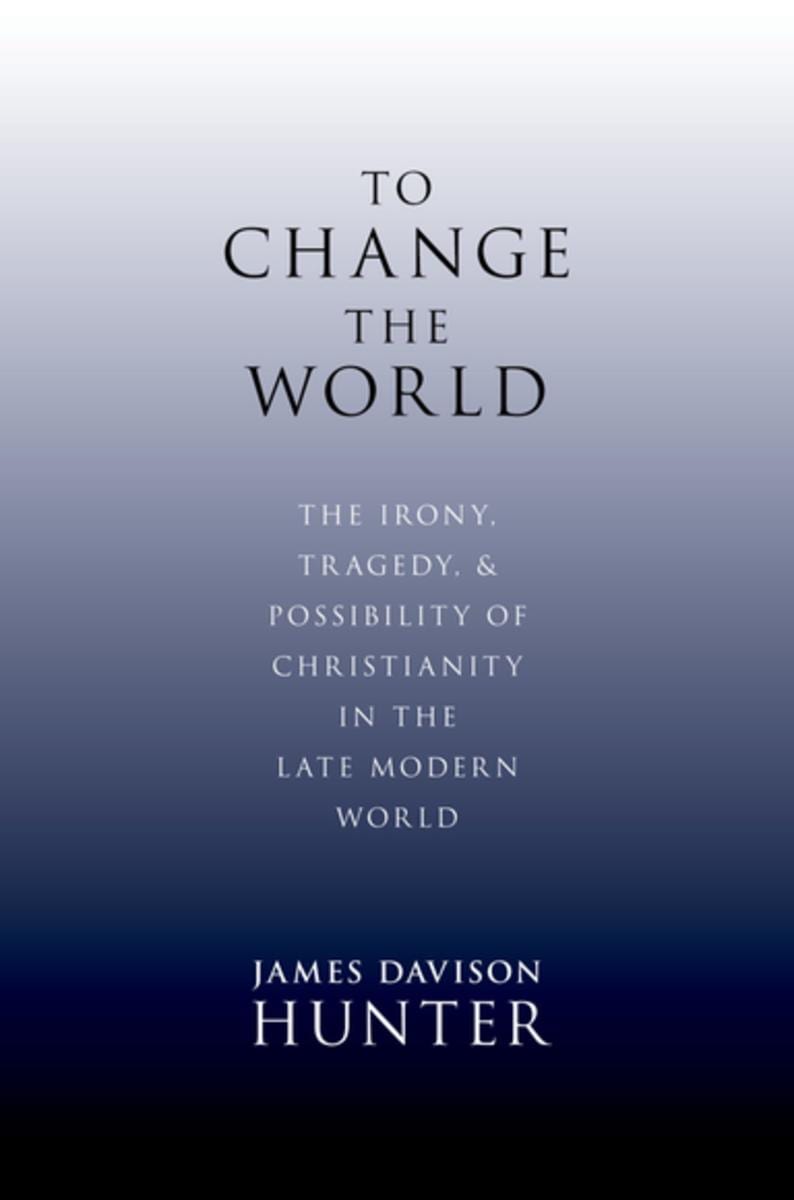 To Change the World: The Irony, Tragedy, & Possibility of Christianity in the Late Modern World

To Change the World: The Irony, Tragedy, & Possibility of Christianity in the Late Modern World

The call to make the world a better place is inherent in the Christian belief and practice. But why have efforts to change the world by Christians so often failed or gone tragically awry? And how might Christians in the 21st century live in ways that have integrity with their traditions and are more truly transformative? In To Change the World, James Davison Hunter offers persuasive—and provocative—answers to these questions.

Hunter probes into the relationship between American Christians and politics by presenting three prominent types of positions: the conservative, progressive, and the so called neo-Anabaptist. For all the differences between these groups, there are remarkable similarities. At a basic level, they share a common narrative structure with respect to the Christian faith in its engagement with culture. Each of them, however, also has the same essential flaw, says Hunter, and it centers on the problem of how they utilize power—a failure to share power, the politicization of power, and the overstated, coercive application of power. Hunter therefore concludes, “In short, in contrast to the kingdoms of this world, [Christ’s] kingdom manifests the power to bless, unburden, serve, heal, mend, restore, and liberate” (192). It is the model of Christ and his kingdom that must be scrupulously followed, a consideration of which constitutes the last third of the book.

Instead of institutions conforming to one of the three dominant political theologies mentioned above, Hunter posits a fourth paradigm, which he calls “Faithful Presence” (238ff.). He writes, “There is a timeless character to [living in fellowship and integrity with the person and witness of Jesus Christ] that evokes qualities of life and spirit that are recognizable throughout history and across cultural boundaries” (197). This principle, unpacked in the book’s final six chapters, offers suggestions that stir one’s pastoral imagination, covering a wide array of topics such as holiness, worship, community, discipleship, outreach, and leadership.

Any thinking Christian concerned with how to engage culture should read this book. Hunter’s expertise as a sociologist and his seriousness toward Christian living lead him to say things in ways that are wonderfully relevant, fresh, and insightful. Pastors, of all people, will find these lessons beneficial. There is however a major theological blind spot.

Hunter doesn’t seem to appreciate that the image of God and creation mandate, in addition to calling Christians to embody the Lord’s presence, also call us to confront the world with God’s inspired Word. This prophetic mandate, exercised by Adam in the garden, Israel in the Land, and by the Lord Jesus himself, now belongs to the church. It is a redemptive historical misstep on the part of Hunter which causes him to emphasize certain biblical themes such as incarnation, shalom, and community, at the expense of others such as the cross, resurrection, and the pouring out of the Holy Spirit. It is natural, therefore, in Hunter’s eschatological universe, to speak of the need for Christians to embody Jesus’s “faithful presence,” that is, being God’s people in the world, but the enterprise of gospel proclamation is largely overlooked.

A more biblically chaste understanding of divine image and the creation mandate will recognize that while faithful presence is absolutely necessary, it must be accompanied by a dynamic communication of the message that Jesus Christ is Lord. Elements of this message such as sin, righteousness, and judgment will not play well in the world, but that’s to be expected. “’A servant is not greater than his Master.’ If they persecuted me, they will also persecute you” said Jesus (John 15:20). Nevertheless, according to God’s promise, the power and glory of Christ’s kingdom will advance through the church, and at times even change the world, despite the humility and relative weakness of the ones who proclaim it.