Recognizing that the church has long benefited from stories of international missions, we want to encourage readers through our Remembering Great Missionaries series, highlighting classic missionary biographies that continue to inspire us today.

After 11 hours of travel down the east coast of India, I finally arrived.

In reality, I began this journey 24 years ago when I first read A Chance to Die, Amy Carmichael’s biography written by another missionary, Elisabeth Elliot. That book about Carmichael’s life, ministry, and most of all, devotion to God—her “Unseen Leader”—helped set my life’s course. It portrays a life seeking to trust and obey the Lord through every twist and turn.

Carmichael, born in Ireland in 1867, had a “propensity for upsetting things,” usually when she felt her way was the right way and even if it wasn’t the usual way. Saturated in godly influence, beginning with her Presbyterian family, Carmichael’s young life was shaped by the Keswick movement and Hudson Taylor’s China Inland Mission. At age 25, she set sail for the East, giving her life to sharing Jesus in Japan, China, Ceylon, and finally India, where she spent the final 55 years of her life. 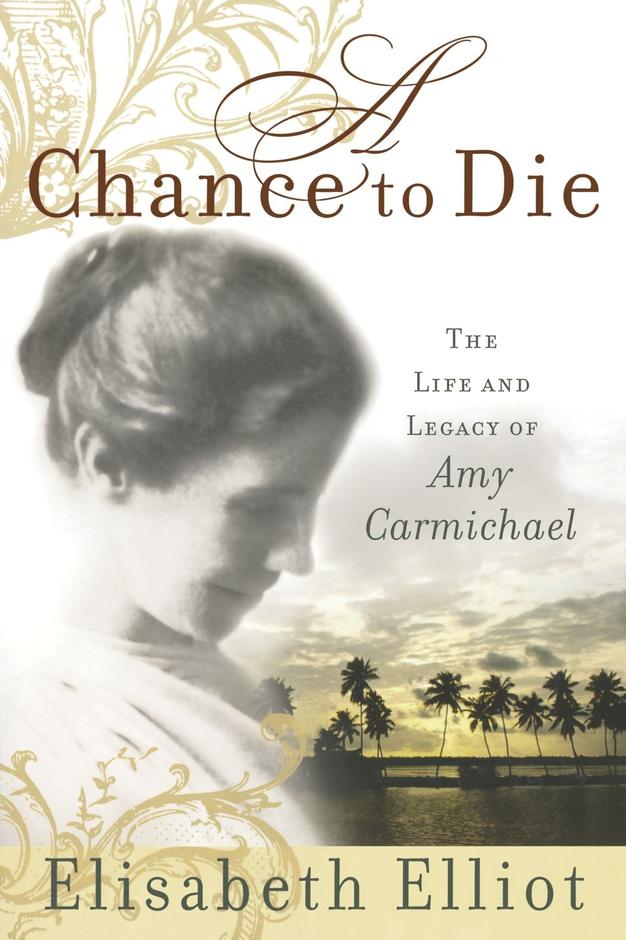 A Chance to Die: The Life and Legacy of Amy Carmichael

A Chance to Die: The Life and Legacy of Amy Carmichael

A Chance to Die is a vibrant portrayal of Amy Carmichael, an Irish missionary and writer who spent fifty-three years in south India without furlough. There she became known as “Amma,” or “mother,” as she founded the Dohnavur Fellowship, a refuge for underprivileged children.

Amy’s life of obedience and courage stands as a model for all who claim the name of Christ. She was a woman with desires and dreams, faults and fears, who gave her life unconditionally to serve her Master.

Bringing Amma to life through inspiring photos and compelling biographical narrative, Elisabeth Elliot urges readers to examine the depths of their own commitment to Christ.

During her first five years in South India, Carmichael diligently worked to learn the local language (Tamil), connect with local women, and use every opportunity to share the Bible. She also learned of the devadasi (temple prostitute) system of enslaving little girls, but she initially couldn’t gain access to them.

These were girls who had been dedicated to Hindu temples for various reasons: to fulfill a vow or family custom, to settle a social issue, because their poor mothers could find no suitable husband for them, or because the family lacked funds to pay for funeral rituals. As a result, little girls became currency. And knowledge of this system became a “sword in Amy’s missionary soul.”

In 1901, despite attempts to frighten girls in the temple by calling Carmichael a “child-stealing ammal” (“mother”), a 7-year-old girl named Preena fled from a Hindu temple and found Carmichael. Within three months of Preena “adopting” Carmichael as her mother, four more children came into Carmichael’s care. To them, she became known as “Amma,” and the “overwhelming desire to save the children became a fire in her bones.”

The overwhelming desire to save the children became a fire in her bones.

Eventually, Amma worked to establish the Dohnavur Fellowship. Near India’s southernmost point, this became the home for a peculiar yet God-woven family of women and girls. Later, rescued boys joined as well, along with missionaries from India, Ireland, England, Scotland, Canada, Australia, New Zealand, the Netherlands, Germany, and Switzerland. By the time of Amma’s death in 1951, the Dohnavur family included nearly 900 souls.

Things as They Are

Through A Chance to Die, Elisabeth Elliot introduces her readers to a vibrant and driven woman who battled evil forces and cultural norms on two continents. It also reveals the toll her intense personality sometimes took on relationships. It’s a book that demonstrates Carmichael’s incredible strength but doesn’t shy away from her weaknesses and humanity.

One such weakness was likely Carmichael’s relationship to the local church. Ecclesiological matters didn’t concern her much. She set the family rules of Dohnavur around believing in the Bible’s verbal inspiration, trusting God’s power to handle his Enemy, and maintaining family loyalty. Carmichael loved learning. She devoured the biographies of missionaries and books on a great many subjects. She also loved writing, producing a mountain of poetry, songs, and more than 35 books.

One of her earliest and most controversial books, Things as They Are, had the missionary community in an uproar due to its honest telling of the unglamorous side of missionary work. Carmichael wrote honestly about her difficulties and struggles. While A Chance to Die highlights her overarching story and the birth of a tremendous ministry amid darkness, it’s Things as They Are that truly spotlights, well, things as they are.

Carmichael wrote honestly about the difficulties and struggles of missionary work.

For many years, Carmichael fought for the truth and love of Jesus to be known across South India. The Dohnavur Fellowship rescued thousands of children from earthly suffering and eternal torment. She held fast to the “Pattern Shewn,” the principles she believed God gave her for her family. Although Amma’s adamant adherence to her vision occasionally produced conflicts within the missionary community and caused some to part ways with Dohnavur, her family loved her.

In October 1931, Amma had a terrible fall that left her partially bedridden until June 1948. Later, she suffered another fall that made her practically immobile. On January 18, 1951, Amma went to be with Jesus from her bed in the main bungalow of Dohnavur. Still today, the community of the Dohnavur Fellowship expresses great affection and gratitude for their Amma.

Twenty-four years ago, I first read the story of Carmichael and the Dohnavur Fellowship. Carmichael’s life, lived on “a razor edge between faith and presumption,” continues to inspire me to pursue trust in and obedience to God in all things. Through her story, I too “heard ‘the cry of the heathen,’ and could not rest,” eventually following that cry to India.

Today, most of the buildings at Dohnavur are no longer in use. The population on the compound is aging quickly, and the peacocks seem to outnumber the children. Only about 20 girls live in the residence, and everyone else is very senior.

As I wandered the grounds, the older sisters in their beautiful purple and blue saris would stop to say hello and ask how I had come to Dohnavur. Then they would immediately tell me their names and say, “I came here as a 4-day-old (or 14-day-old, or 8-day-old) baby.” They would fondly recall childhoods spent in Dohnavur before being sent out for a time of study and work. However, each returned to answer God’s call for service at Dohnavur. It’s a call to forsake all and live a life of trust and obedience.

This is Amy Carmichael’s true legacy, a legacy of people changed forever through trust in Jesus and obedience to follow Amma’s Unseen Leader, even if it means service and sacrifice in the darkest corners of the earth. I pray that as you read A Chance to Die you will hear the “cry of the heathen” and follow it to wherever God is not known, whether that be to the one sitting next to you or those halfway around the world.

Sydney Dixon (PhD student, Southeastern Baptist Theological Seminary) is a missionary who spent five years living in Eastern Europe and who has been serving in South Asia since 2015.