Peter Kreeft—philosophy professor at Boston College and highly regarded apologist for the Roman Catholic faith—offers a simple and eminently readable book on the threshold of the 500th anniversary of the Protestant Reformation: Catholics and Protestants: What Can We Learn from Each Other?

Readers hopeful for ecumenical reconciliation between these two traditions will especially appreciate this book (importantly, Kreeft’s vision of ecumenicity is not the typical “lowest common denominator” variety). Yet many won’t find Kreeft’s book convincing, since he fails to breach the divide on the following seven topics.

Roman Catholic theology is characterized by an et . . . et (and . . . and) approach. In Kreeft’s own words, “Whenever two positive things seem to conflict, the Church sorts them out as some kind of a ‘both-and’ instead of a simple ‘either-or’” (11). This is the opposite of Protestant theology’s approach, which is grounded on the five “solas”: Scripture alone, rather than Scripture, Tradition, and the Magisterium; grace alone, rather than grace that enables human effort for the meriting of eternal life; faith alone, rather than faith plus sacramental grace that promotes good works; Christ alone, rather than Christ and the Roman Catholic Church as the prolongation of the incarnation of Christ; and the glory of God alone, rather than divine glory plus a measure of honor accorded to Mary and the saints. 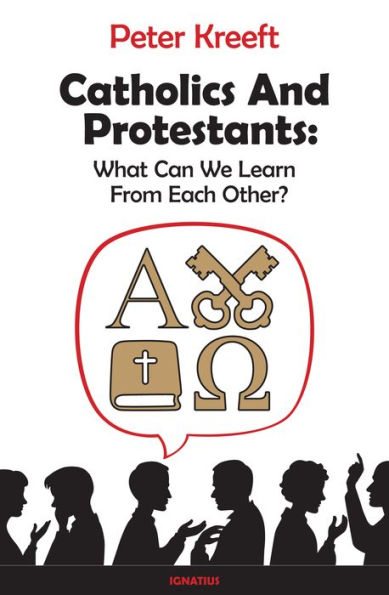 Catholics and Protestants: What Can We Learn from Each Other?

Catholics and Protestants: What Can We Learn from Each Other?

The Roman Catholic Church maintains the Reformation is finished due to “the greatest ecumenical achievement in the 500 years since the Reformation” (17): Joint Declaration on the Doctrine of Justification (1999). Since agreement seemingly exists on the key doctrine in the Protestant-Catholic schism, Kreeft is hopeful that agreement on the remaining divisive issues will be achieved.

While I appreciate his earnest hope for unity to overcome division, I don’t agree the first step toward such healing has been taken. Indeed, many Protestants consider the Joint Declaration to be both wrong and dangerous, and it doesn’t indicate the Reformation is over (see Chris Castaldo’s and my The Unfinished Reformation).

Roman Catholic theology embraces the broad category of Tradition, part of which is Scripture. For Kreeft, this perspective on divine revelation prevents the debate from being framed as sola Scriptura versus Scripture plus Tradition. But I don’t think Kreeft’s presentation accords well with Dei Verbum’s formulation of the relationship between Scripture and Tradition (Dei Verbum, 9).

Kreeft’s presentation of conservative Protestants’ view of the inspiration of Scripture is also lacking, as he nearly identifies it as mechanical dictation. I also dissent from Kreeft’s narrative of the historical development of the New Testament canon, with his conclusion that the Roman Catholic Church “was the efficient cause (the producer) and the formal cause (the definer) of the Bible” (38). On the contrary, as John Webster explains, “Scripture is not the Word of the church; the church is the church of the Word.”

Roman Catholic theology maintains that Mary, “in the first instance of her conception, by a singular privilege and grace granted by God, in view of the merits of Jesus Christ, the Savior of the human race, was preserved exempt from all stain of original sin” (Ineffabilis Deus, December 8, 1854). I can’t help but feel Kreeft equivocates on the doctrine of salvation when he discusses Mary’s Immaculate Conception (64–66; cf. 135).

Indeed, Kreeft devotes one of his longest discussions to the doctrine of Mary (ch. 28). His role as Catholic apologist stands out clearly in his dismissal of Protestant objections and his strong arguments for Mariology, even concluding that “[n]ot only is Mary no threat to the heart of evangelicalism, but she is a tremendous aid to it” (136). His perspective is at odds with Evangelicals and Catholics Together (ECT), which, in its document “Do Whatever He Tells You: The Blessed Virgin Mary in Christian Faith and Life” (2009), admits the vast distance between the two traditions on this doctrine.

Roman Catholic theology is grounded on the axiom of nature-grace interdependence (see my Roman Catholic Theology and Practice). This axiom maintains that nature—any created reality, like water, oil, bread, or wine—is capable of receiving and transmitting divine grace. Indeed, this grace must be infused concretely into the Catholic faithful through natural elements: the sacramental grace of baptism (through water), confirmation (through oil), the Eucharist (through bread and wine), and the rest.

For Kreeft, this Catholic sacramental emphasis stands over against the Protestant evangelistic emphasis (82). Many Protestants will disagree with Kreeft’s characterization of them as not being sacramental, and will also disagree with the nature-grace interdependence and its insistence that grace must be communicated through the elements of nature. Indeed, Protestantism’s first mark (the right preaching of the Word of God) distinguishes it from Catholic sacramentalism, while its second mark (the right administration of baptism and the Lord’s Supper) demonstrates its high regard for the sacraments.

The Roman Catholic Church considers the Eucharist to be Christ’s “most precious gift of all: himself, in person, really and fully and truly and completely present, body and blood, soul and divinity” (52). I’m not sure Kreeft’s further description of Christ as “hiding beneath the appearances of the Eucharistic bread and wine, playing peek-a-boo with us as a loving father does with his little baby” is apt (52).

And Kreeft’s challenge to Protestants to move from doubting to knowing that Christ is present in the Eucharistic elements displayed in the tabernacle—his challenge is to pray and ask the Lord himself if he is truly present (54)—skirts the real issues Protestants and Catholics alike agree are major points of disagreement on transubstantiation.

7. Christ and the Church

Roman Catholic theology is grounded on the axiom of the Christ-Church interconnection (again, see Roman Catholic Theology and Practice). This axiom concerns the Catholic Church’s self-identification as the whole Christ: divinity, humanity, and body. As Kreeft explains, “The Church is the ‘extension of the Incarnation’” (170). This Christ-Church connection seems to make the Catholic Church necessary for salvation (171).

Indeed, as Kreeft underscores, this is Rome’s historical position—“that outside the Church there is no salvation” (171). However, Kreeft immediately qualifies his discussion, explaining that “the Church also teaches that this does not mean that all who do not know the Church is Christ’s body and who therefore remain outside of her are damned” (172). His presentation on Roman Catholic inclusivism (another major discussion, ch. 30), a development since Vatican II, is a good summary of the Church’s position that Protestants like me who embrace exclusivism will find disappointing.

The Catholic Church and Protestant churches often use the same vocabulary—words like “gospel,” “grace,” “mercy,” “evangelization,” and more. Importantly, however, these words don’t carry the same connotations when used by the two traditions. One thinks of the “Door of Mercy” in the Catholic Church, a means of obtaining mercy polar opposite from the way Protestants obtain mercy.

For a basic orientation to the relationship between Catholicism and Protestantism, told from a Catholic apologist’s perspective, Kreeft’s book is a fine guide. Though most TGC readers will rightly disagree with his view, we can learn from it nonetheless.

Gregg R. Allison is professor of Christian theology at The Southern Baptist Theological Seminary. He is secretary of the Evangelical Theological Society, an elder of Sojourn Church East, and a theological strategist for the Sojourn Network. He is the author of three major works, Historical Theology: An Introduction to Christian Doctrine (Zondervan, 2011), Sojourners and Strangers: The Doctrine of the Church (Crossway, 2012), and Roman Catholic Theology and Practice: An Evangelical Assessment (Crossway, 2014).