We live in a crazy world.

Data streams to us at a rate that prevents absorption and complete comprehension. Making decisions, whether in the workplace or at home, is often based on prior reasoning that may or may not be biblically sound. Particularly in the marketplace, as consumers and producers, we’re required to navigate a labyrinth of transactions laden with ethical significance. While it’s simplest to default to simple ethical reasoning based on utilitarianism, egoism, relativism, or any other method, there’s a deep need for us to pursue a biblical perspective on our daily ethical choices in our business transactions.

One challenge in developing a biblical business ethic for the 21st century is that the marketplace has changed since the books of the Bible were written. There are principles and analogies that can be brought forward, but the cultural distance is significant. In his new book Business Ethics in Biblical Perspective: A Comprehensive Introduction, Michael Cafferky begins with the recognition that “the Bible writers were aware that the primary readers (or hearers) of the Bible story were living, buying, selling, working, and playing among people who did not accept biblical ideals” (23). It takes critical thinking to get from the text to present application, which is exactly what Cafferky seeks to do. Building a biblical worldview for business that rightly conveys the ethical norms of an ancient text to the present market with its global complexities is not, on the whole, a simple process. This makes Business Ethics in Biblical Perspective timely and significant.

When a book claims to be comprehensive, suspicion is warranted. Topics are too complex and the volume of information too varied to ever be truly comprehensive. Despite boasting nearly 500 pages of content, producing an introductory text on business ethics would be an impossible task. Cafferky, however, comes reasonably close. 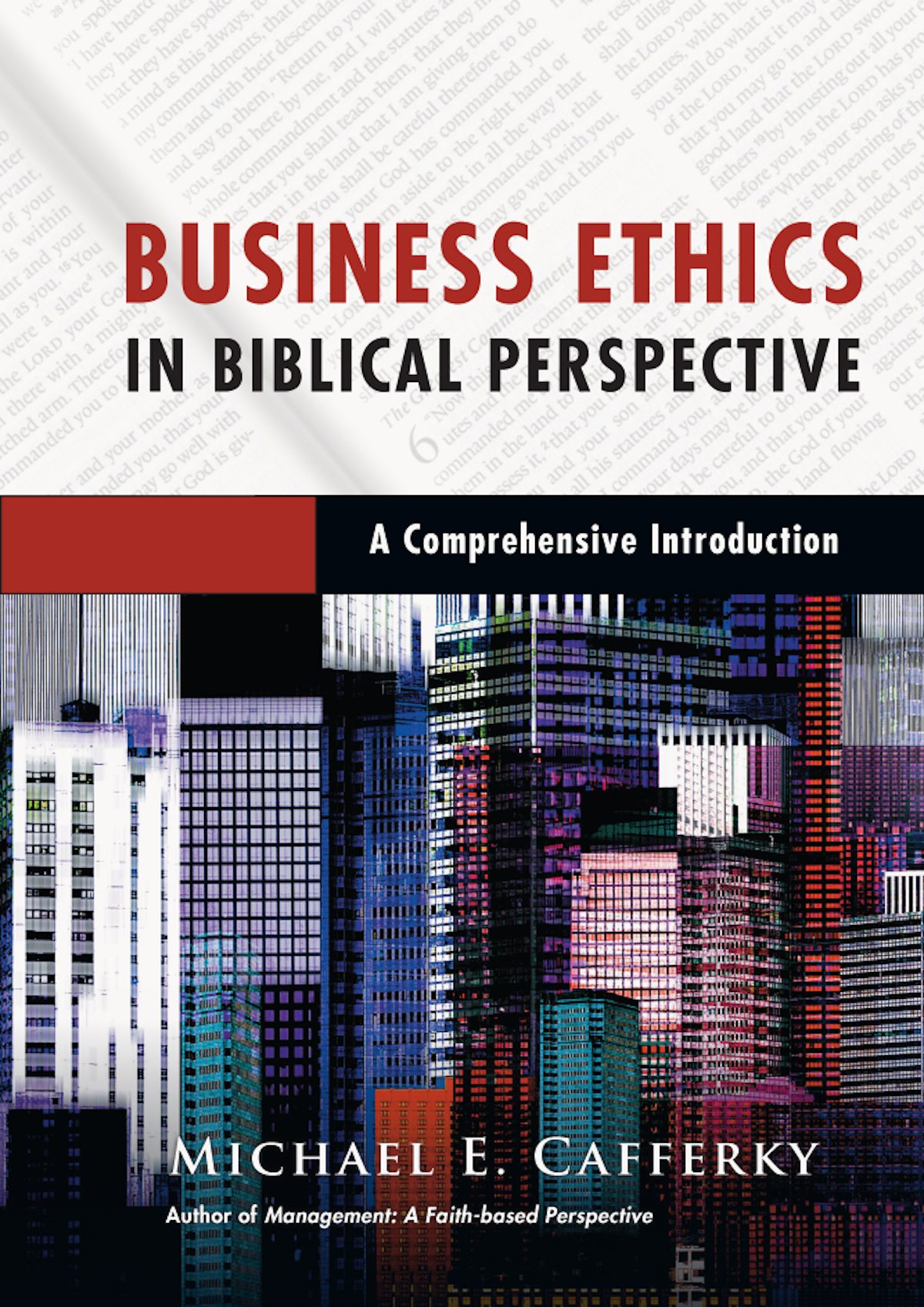 After a brief introduction Cafferky, chair for entrepreneurship and business ethics at Southern Adventist University, tackles his monumental task in five distinct parts. The first four chapters, which compose Part One, lay out the fundamental concepts for the book. He explains why ethics is important for business and where the points of tension reside. He also introduces 12 biblical themes that he uses to examine complex issues related to business ethics. Part Two contains nine chapters that present and critique the major competing approaches to ethics. In the five chapters of Part Three, Cafferky briefly outlines the basic characteristics of contemporary ethic issues including those related to consumer behavior, management, accounting and finance, marketing, and global business. Although brief, there’s sufficient detail in these chapters and realistic case studies to convey the meat of the issues. In Part Four, he examines corporate responsibility and the overall morality of economic systems. Cafferky concludes with an exhortation to develop a moral compass in advance of ethical crises. Finally, Part Five contains appendices that condense the information in earlier chapters into charts and tables, which are accompanied by a number of thought-provoking case studies.

Many volumes attempting to approach the ethics of a certain issue from a Christian perspective present Scripture as an additional source to be considered—in a fundamentally non-Christian ethical way. Business Ethics in Biblical Perspective is an exciting publication since it recognizes Christian moral reasoning as something entirely different than other systems of moral philosophy. Because moral philosophers lack consensus on the best method of moral reasoning, most introductory ethics texts tend to offer a list of options with no positive recommendation. Those from a Christian perspective tend to survey the alternatives and offer biblical additions to sanctify certain forms of ethical reasoning. Cafferky’s volume is head and shoulders above many others since it accounts for the central authority of Scripture in all of life. He begins from the foundation of the Bible and applies the resultant biblical-theological ethics to the questions raised by the marketplace. This allows for faithfulness to biblical norms, though, Cafferky notes, in some situations “the biblical-theme approach may require more work than so-called secular, contemporary approaches” (23).

Business Ethics in Biblical Perspective avoids the danger of proof-texting to support particular interpretations on specific issues. Instead, Cafferky presents and develops 12 biblical themes that should be applied when evaluating specific ethical issues. These include big picture biblical motifs such as creation, holiness, Sabbath, justice, truth, and redemption. Many will recognize these themes from various treatments of biblical theology; indeed, this text has a distinctly theological tone. Building on his theological awareness, Cafferky communicates the complexity of authentic biblical ethics, continually reminding readers that the believer’s conduct, the character of God, and the person and work of Christ must be considered when making ethical claims. Business Ethics in Biblical Perspective, then, lives up to its title by taking Scripture seriously without defaulting to wooden, legalistic reasoning.

Since the volume is designed as an introductory textbook for a business ethics course, a large portion is devoted to alternative systems of moral reasoning about business. Cafferky presents each competing systems fairly, in a way proponents would recognize. Since he’s promoting a biblical-theological approach to ethics, however, the others are critiqued for their strengths and weaknesses and evaluated through the lens of the biblical themes he advances.

Business Ethics in Biblical Perspective is more than a basic introduction to business ethics; it’s a distinctly Christian explanation of the topic. Because Cafferky recognizes the importance of Scripture to all of life, he provides a means to apply it organically to various situations. Because he believes Christianity is a way of living that affects each moment and decision, he presents an ethic that drives toward personal holiness. Therefore, there is devotional value in reading this academic volume.

Business Ethics in Biblical Perspective should become the standard text in business ethics courses in Christian universities. It also has a place in churches as a tool for discipling those engaged in the business worlds at all levels.