“Religion is the cause of all wars.”

“The church is on the wrong side of history.”

If you haven’t heard these objections to Christian faith, you need to get out more. If you have, you need John Dickson’s new book.

As Dickson reports in the opening pages of Bullies and Saints: An Honest Look at the Good and Evil of Christian History, 39 percent of Americans agree that religion does more harm than good (xx). That figure is 61 percent in the country I’ve made my home, England, and it’s 63 percent in the land of my birth, Australia. That’s where Dickson lives and where he has engaged a skeptical audience for decades. If you want help connecting the ancient faith to the post-Christian west, then Dickson—a former rock ’n’ roller, Anglican minister, documentarian, ancient historian, podcaster, and author of 18 books—is here to help. And he proves exceptionally helpful not only as a model of what to say but in teaching us how to say it. 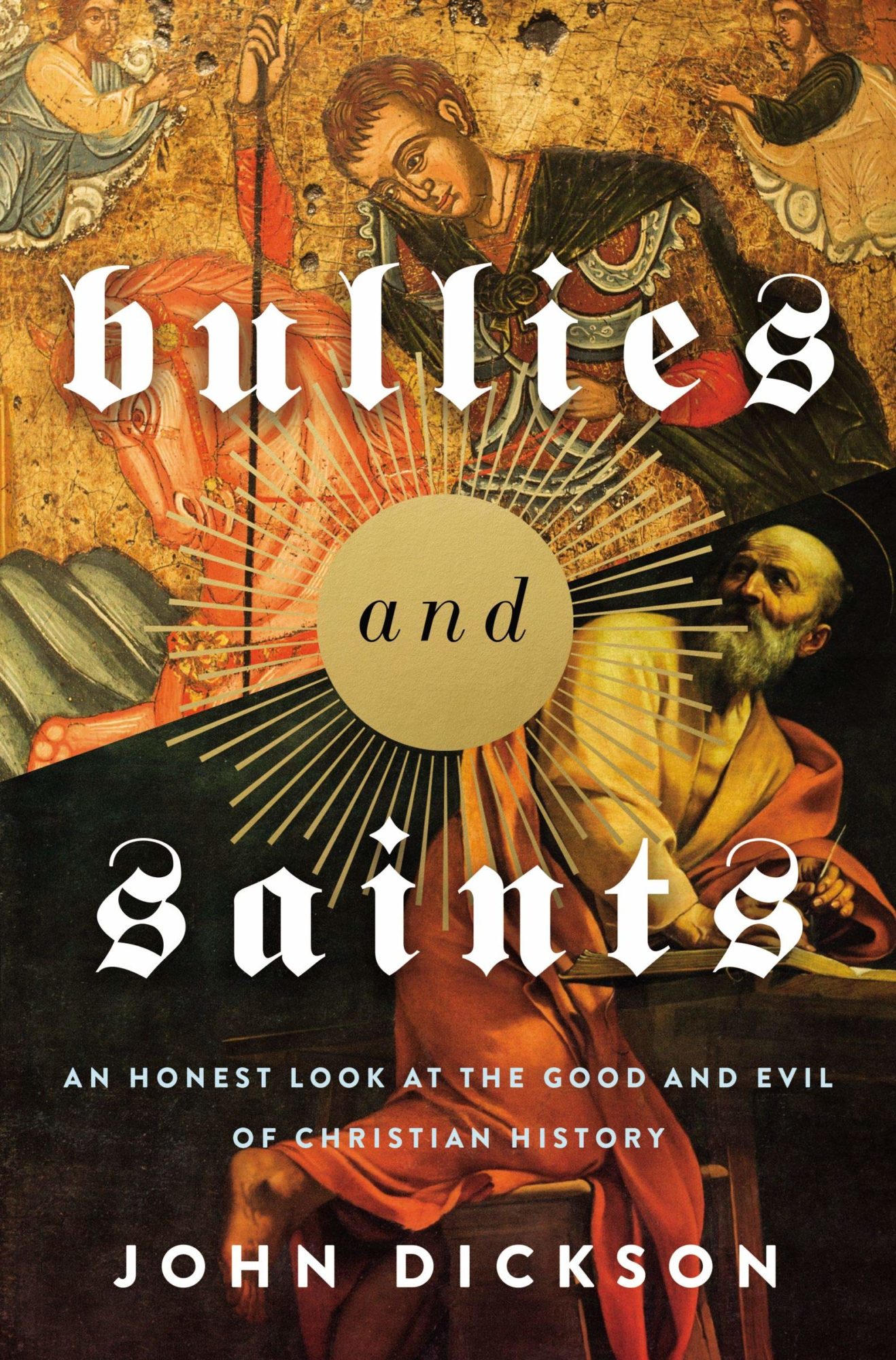 Bullies and Saints: An Honest Look at the Good and Evil of Christian History

Bullies and Saints: An Honest Look at the Good and Evil of Christian History

Is the world better off without Christianity?

Combining narrative with keen critique of contemporary debates, author and historian John Dickson gives an honest account of 2,000 years of Christian history that helps us understand what Christianity is and what it’s meant to be.

To say that the Christian Church has an “image problem” doesn’t quite capture it. From the Crusades and the Inquisition to the racism and abuse present in today’s Church—both in Catholic and Protestant traditions—the institution that Christ established on earth has a lot to answer for. But the Church has also had moments throughout history when it has been in tune with Jesus’s teachings—from the rise of charity to the invention of hospitals.

For defenders of the faith, it’s important to recognize the good and bad in the church’s history and be inspired to live aligned with Christ. For skeptics, this book is a thought-provoking introduction to the idea that Christianity is, despite all, an essential foundation of our civilization.

Take, for instance, his first move in recounting the history of Christianity: he begins in 1099 with the Crusades before rewinding to the first century and hitting play on his 20-century survey. This is emblematic of Dickson’s overall approach. He assumes his reader will be skeptical. Dickson describes himself as a “public advocate” for Christianity, and his goal is emphatically not to make Christians feel better about themselves or their history. He is writing for the 63 percent of Australians (and 39 percent of Americans) who think Christian faith is bad news for the world. He assumes events like the Crusades will loom so large in their thinking that these objections must be acknowledged before a hearing is granted. But Dickson does not only acknowledge the dark side of Christian history. He exposes it to unflinching and uncomfortable scrutiny.

There are saints in this history—many of them, like Benedict or Boniface or Alcuin (if you’ve never heard of them, that’s even more reason to read the book). But there are bullies too, like Ambrose or Peter the Hermit or Torquemada. Some were saints who turned bully, like Bernard of Clairvaux, known for his devotional writings but also for endorsing the “holy violence” of the Crusades. Others were bullies turned saints, like Charlemagne, who was persuaded by Alcuin that education, not the sword, was the way to spread Christ’s kingdom.

On the one hand, Dickson explores the “beautiful tune” Christ taught the world and the church sang out in the pioneering of charities, hospitals, education, and human rights (chapter 3). On the other hand, he exposes the ugly side of Christian history, in which the church sang badly out of tune: the Crusades (chapters 1–2), the Inquisition (chapter 20), the Troubles in Northern Ireland (chapter 22), abuse scandals (chapter 23), and much more. The song is still good, even if the singers have at times betrayed it.

The song is still good, even if the singers have at times betrayed it.

We Must Repent First

As historian Tom Holland wrote in his endorsement of the book, it’s “a commendably honest work that goes beyond simple apologetics: one that is all the more subtle in its effect for being often very apologetic.” This brand of apologetic apologetics is born of conviction, not cowardice. I’m sure that some of Dickson’s style is explained by a temperamental love of persuasion over pugilism, but there are deeper principles at work too.

For one, there’s the belief that judgment begins with the house of God (1 Pet. 4:17). Those who take this to heart should be the first to bow their heads to righteous critique. Second, there’s the truth that a “witness” is a “martyr” (it’s the same word in Greek). This means, in Dickson’s phrase, we are called to be “Good Losers” (the title of chapter 5). Just as martyrs in the early church met the brutality of the Roman Empire with suffering love (46–57), so today there are ways of swallowing pride and leading with contrition that will win a hearing for the gospel. The strategy Dickson reports he also seeks to embody as the book unfolds.

The sweep of the book is encapsulated by the titles of two key chapters. Dickson rewinds to the first century in chapter 4: “The Log in the Eye of the Church.” Once we reach the end of the book, he calls his final chapter “The Log in the Eye of Us All.” First we hear the sins of the church and then the world is invited to consider its own. Dickson does not flinch from calling people to repent. But he believes Christians should be first to confess.

Can We Go Too Far?

Not many apologists would be patient enough to carry readers along this journey. Many, perhaps including me, might want to point out non-Christian hypocrisies much earlier and trumpet Christian accomplishments as a way of drowning out the secular critiques. That is not Dickson’s approach. He portrays the successes of the church always as mixed successes and, however glowing they appear, the successes are never excuses for the failures. In all things he seeks fair-mindedness, almost to a fault.

The charity shown to the non-Christian world throughout is a sound policy both theologically and persuasively, but at times it does raise eyebrows. Like the couple of times the book describes Islamic invaders as “knocking on the door” of the Byzantine Empire (5, 172). For Dickson, Crusaders commit atrocities, the Muslim armies are “knocking on doors.” The phrase conjures images of two well-dressed Muslims with name badges politely asking, “Can we talk to you today about the Prophet Muhammad?” The reality was decidedly more savage.

Dickson does not flinch from calling people to repent. But he believes Christians should be first to confess.

Dickson is so intent on fairness to the non-Christian world and he’s so sensitive to appearing self-congratulatory that he declines to make points that, ironically, non-Christian historians commonly would.

For instance, Tom Holland’s Dominion offers, in Dickson’s words, “a far more flattering history of Christianity” than Bullies and Saints (285). For Holland, the Christian advances in charity, education, medicine, human rights, and so on, are not merely chronicled but emphasized as unique and pioneering movements without parallel in the pre-Christian world.

Apologies are not necessary for uninformed accusations hurled by those ignorant of history, but there are some stains on our record that no degree of myth-busting can remove. Such stains are dark, and only apologetic apologetics will do.

We might prefer our apologists to be confident—cocky, even. But as Tom Holland has noticed in Dickson’s work, there’s a subtle power to the contrite apologist. Bullies and Saints can teach us how to wield it.

Glen Scrivener is an ordained Church of England minister and evangelist who preaches Christ through writing, speaking, and online media. He directs the evangelistic ministry Speak Life. Originally from Australia, Glen now lives with his wife, Emma, and two children in England, and they belong to All Souls Eastbourne. He is the author of several books, including The Air We Breathe: How We All Came to Believe in Freedom, Kindness, Progress, and Equality (The Good Book Company, 2022) and 3-2-1: The Story of God, the World, and You (10Publishing, 2014).