In a Western, American age where obsession with self reigns, Brené Brown’s latest book, Braving the Wilderness: The Quest for True Belonging and the Courage to Stand Alone, is apt to find broad reception.

On the surface, Braving the Wilderness is a book about belonging to yourself. Brown, research professor at the University of Houston, begins by quoting someone she greatly admires, Maya Angelou: “You are free when you realize you belong no place—no place at all. The price is high. The reward is great.” By the end of chapter one, Brown explains that she understands what Angelou means: “Maya belongs to Maya. I belong to myself.”

But as Brown works out what it means to belong to oneself, she unveils an ideology of the divine self—an elixir of New Age thought, Eastern mysticism, and pop psychology. Building off her previous books on shame, vulnerability, and belonging, Brown adds to her previous definition of true belonging found in her 2010 book, The Gifts of Imperfection. In this new work, she writes:

True belonging is the spiritual practice of believing in and belonging to yourself so deeply that you can share your most authentic self with the world and find sacredness in both being a part of something and standing alone in the wilderness. True belonging doesn’t require you to change who you are; it requires you to be who you are. (157)

What we find in her book is more than the old adage “Believe in yourself.” Rather, each person is purported to be divine—a divinity or “power” that humanity collectively shares with one another that resembles the “Force” in Star Wars or the New Age belief in the “Higher Self.” Observe these quotes from Brown: 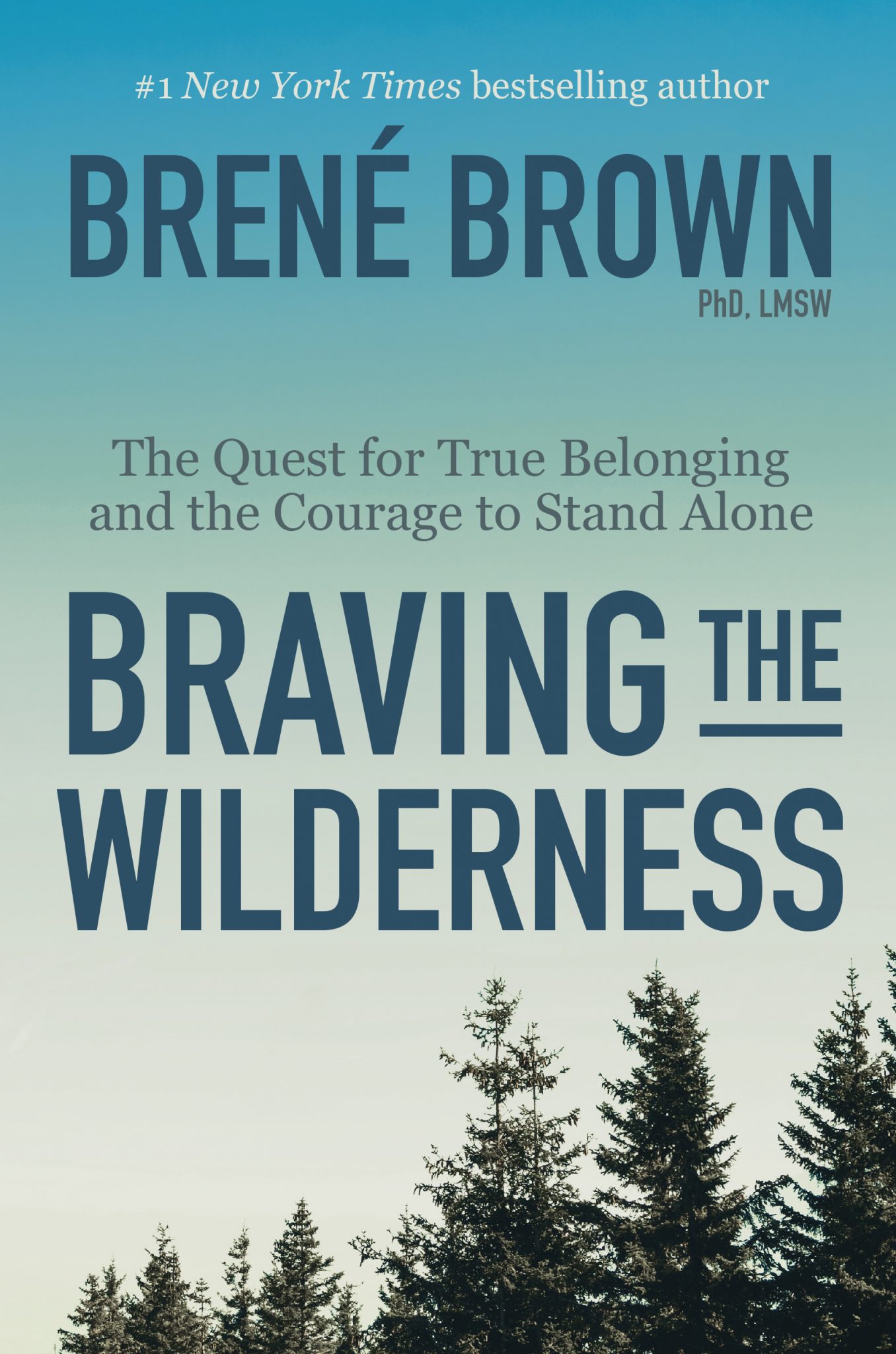 Braving the Wilderness: The Quest for True Belonging and the Courage to Stand Alone

Braving the Wilderness: The Quest for True Belonging and the Courage to Stand Alone

I can only conclude our world is in a collective spiritual crisis. . . . Spirituality is recognizing and celebrating that we are all inextricably connected to each other by a power greater than all of us and that our connection to that power and to one another is grounded in love and compassion. (45)

And if our faith asks us to find the face of God in everyone we meet, that should include the politicians, media, and strangers on Twitter with whom we most violently disagree. When we desecrate their divinity, we desecrate our own, and we betray our faith. (76, emphasis added)

We’re in a spiritual crisis, and the key to building a true belonging practice is maintaining our belief in inextricable human connection. That connection—the spirit that flows between us and every other human in the world—is not something that can be broken; however, our belief in the connection is constantly tested and repeatedly severed. (117)

A wild heart is not something you can always see—and yet it is our greatest spiritual possession. (155)

Brown’s religion is a religion of the autonomous self, which she believes—if rightly practiced—will naturally result in an ethic of respect for others. She suggests that by turning inward, going deeper into ourselves—which she calls our “wilderness”—we will be able to belong to our true selves and thereby belong to others with whom we share in the divine (115).

In his 1979 bestseller, The Culture of Narcissism, cultural historian Christopher Lasch diagnosed post-1960s American society with something similar to the clinical diagnosis of narcissistic personality disorder or “pathological narcissism.” This excessive self-love plagues not just the society as a whole but individual lives as well, Lasch argued. It’s within this milieu that New Age was birthed.

As Brown works out what it means to belong to oneself, she unveils an ideology of the divine self—an elixir of New Age thought, Eastern mysticism, and pop psychology.

Brown’s book fits in this rubric of incurvatus in se—a phrase Martin Luther borrowed from Augustine—which means “twisted back into one’s self” or “curved in on itself.” Luther writes, “Scripture describes man as so curved in upon himself that he uses not only physical but even spiritual goods for his own purposes and in all things seeks only himself” (345).

Brown is dedicated to this position. The most absurd and yet conclusive summation of her belief in the divine self is found in the last line of the book: “This is when you reach deep into your wild heart and remind yourself, ‘I am the wilderness’” (163). It’s more than a little ironic that when Moses encountered God in the wilderness and asked him his name, God responded with “I Am Who I Am.”

Brown touches on a longing we share as humans, one perhaps more pronounced in an individualistic society like the United States: belonging. We desire to belong to something or someone.

Yes, God made us for community and belonging. It was not good for man to be alone in Genesis 2, so he created a female partner and companion. God himself is not a lonely God. There is community even in the Godhead as he is three persons in one.

Brown touches on a longing we share as humans, one perhaps more pronounced in an individualistic society like the United States: belonging.

But Brown’s answer for belonging falls short and runs antithetical to what we find in Scripture. True belonging doesn’t begin when we belong to ourselves. The opposite is true. In his letter to the church in Colossae, Paul writes that believers should be careful that no one takes them captive by any kind of teaching or belief system that is “not according to Christ” (Col. 2:8). Paul’s emphasis is different: “For in him the whole fullness of deity dwells bodily, and you have been filled in him, who is the head of all rule and authority” (Col. 2:9).

Braving the Wilderness with the True Divine

Contrary to Brown, the Bible teaches that we aren’t divine; Jesus Christ is divine. We are sinful, messed-up beings with no hope outside the grace of God. The same God who told Moses, “I Am Who I Am,” is the same God we find fully in Jesus Christ.

As theologian T. F. Torrance taught, there isn’t a different God behind the back of Jesus Christ. The gospel promises, therefore, that in Jesus Christ, in him, we belong to God. In him we find our true belonging—belonging that was once severed by our sin but is now possible because he canceled “the record of debt that stood against us” by “nailing it to the cross” (Col. 2:14).

While I applaud and even agree with Brown on some of her ethics—not dehumanizing other people, treating them with respect, and so on—her ethics won’t be realized as long as they’re grounded on the theology of divine self. The more we belong to ourselves, curving inward, the less likely we are to lay down our lives for our neighbor.

Brené Brown’s ethics won’t be realized so long as they’re grounded on the theology of divine self.

Rather, the message of Scripture is that we were loved by God when we were unlovable—indeed, when we were his enemies (Rom. 5:10). Ever since Adam and Eve were exiled from Eden, God has been going out to bring us back in. His love isn’t ethereal or untouchable; it’s made concrete in the advent, death, and resurrection of his Son. Only as believing recipients of God’s love—as those who belong to him—are we able to love him and love others.

So if we are to have any hope of embodying a love ethic in which we aren’t dehumanizing, disrespecting, or destroying others, it must begin with belonging to God, the true divine, and not ourselves.

Kristen Padilla is the author of a new book, Now That I’m Called: A Guide for Women Discerning a Call to Ministry (Zondervan, 2018). Located in Birmingham, Alabama, she is a speaker, Bible teacher, wife, and mom, and she serves as the marketing and communications coordinator at Samford University’s Beeson Divinity School, where she earned an MDiv in 2008. Kristen also occasionally blogs at kristenrpadilla.com.