Life continues amid a pandemic, but it seems we’ve lost the stability we once enjoyed, both as individuals and also as a church. The hour is desperate. How should we respond?

One option is to complain, feel pity for ourselves, and blame God. A more faithful option is found in an erudite and compelling new book by Carmen Joy Imes, Bearing God’s Name: Why Sinai Still Matters. We can learn how to respond by looking to the past, she says, particularly to the story of the exodus and the earth-shattering appearance of God at Sinai. At Sinai the Israelites learn who they are by learning whose they are: the name-bearers of Yahweh, Creator of heaven and earth.

Those Who Bear God’s Name

Imes—associate professor of Old Testament at Prairie College in Three Hills, Alberta, Canada—gives an overview of the Israelites’ story (the original name-bearers): their exodus from Egypt, journey to Sinai, covenantal commitment, reception of the Ten Commandments, and preparation for the promised land. The focus in this first part isn’t history per se, but the theological influence of Sinai, and how the Israelites were called to live with God in their midst. 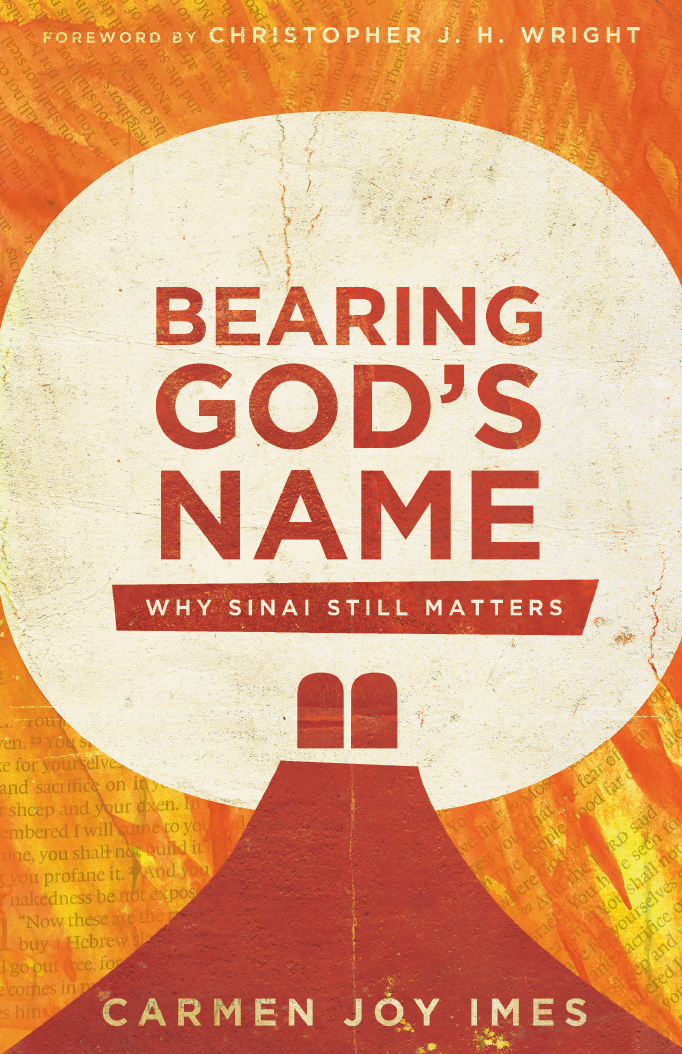 Have you ever wondered what the Old Testament―especially the Old Testament law―has to do with your Christian life? You are not alone. Some Christian leaders believe we should cast off the Old Testament now that we have the New. Carmen Joy Imes disagrees. In this warm, accessible volume, Imes takes readers back to Sinai, the ancient mountain where Israel met their God, and explains the meaning of events there. She argues that we’ve misunderstood the command about “taking the Lord’s name in vain.” Instead, Imes says that this command is about “bearing God’s name,” a theme that continues throughout the rest of Scripture. Readers will revisit the story of Israel as they trudge through the wilderness from a grueling past to a promising future. The story of Israel turns out to be our story too, and you’ll discover why Sinai still matters as you follow Jesus today.

At Sinai the Israelites learn who they are by learning whose they are: the name-bearers of Yahweh, Creator of heaven and earth.

Imes’s central premise has to do with the third commandment in Exodus 20:7: “You shall not take the name of the LORD your God in vain” (the second commandment according to Imes’s numbering, 45–48). Many of us were taught that taking the Lord’s name in vain was akin to saying “OMG” or using God or Jesus’s names as cuss words or oaths. Imes would argue that those things are certainly wrong, though this misses the point of the command. This command, rather, defines holy living. In context, the verb “to take” is better translated “to lift up” or “to bear.” As a result, the name command is more about bearing God’s name in vain than speaking his name incorrectly, similar to how the high priest would bear the name of the Israelite tribes on his breastplate and forehead (the same verb is used in Ex. 28:12, 29). In other words, the high priest is a visual model of what the entire covenant community is called to be and do (51). God’s people shouldn’t bear his name in vain. Rather, they should be holy as God is.

Imes likens bearing God’s name to having an invisible tattoo, marked permanently as God’s people, but visible to the surrounding nations through their conduct and character (48–52). That’s ultimately what bearing his name means. “At Sinai, Yahweh claims this nation as his very own and releases them to live out their calling” (51).

The name command is drawn into sharper focus in the second part (chs. 6–10). Attention is given to Israel’s faithfulness—or lack thereof—in bearing God’s name through the rest of the Old Testament, the symbolism of the temple and its association with God’s name, Jesus fulfilling the law in the New Testament, the church’s mission, and the law’s ongoing importance for Christians who bear God’s name.

As a Bible teacher and pastor, I find nothing more enjoyable—yet humbling—than reading a simple observation about a well-known text, and wondering why I didn’t see it before!

Imes likens bearing God’s name to having an invisible tattoo, marked permanently as God’s people, but visible to the surrounding nations through their conduct and character.

Imes’s argument that the third command is about bearing God’s name is explicit in the Old Testament. Numbers 6:24–26 is particularly noteworthy. As a worship pastor at my church, I often conclude our services with this benediction. After Aaron is consecrated as high priest, he’s told to pronounce a blessing on all the people: “The LORD bless you, and keep you . . .” and so on. But perhaps you’ve sometimes missed the verse immediately following: “So shall they put my name upon the people of Israel, and I will bless them” (Num. 6:27). The benediction symbolically places God’s own name on the people of Israel as a claim of ownership, which marks them out for holy living.

But it doesn’t stop there. As the biblical narrative develops, Imes’s focus shifts from one mountain to another, from Mt. Sinai to Mt. Zion, “which is special for one reason only: Yahweh puts his name there, claiming it as his own” (104). Zion’s importance harkens back to Deuteronomy 12. If God’s chosen people are to bear his name, they must worship at God’s chosen place, that is, the place of his name (Deut. 12:11, 21). This is the basis for the holiness commands (Deut. 5–6).

The benediction symbolically places God’s own name on the people of Israel as a claim of ownership, which marks them out for holy living.

And it’s not just the Old Testament. In chapters 6–7, a biblical-theological vision emerges that draws attention to larger questions that concern faithful Christians, such as the movement from law to gospel, and how the church appropriates Old Testament instructions. Imes demonstrates in chapters 8–10 that since Jesus is the perfect image of the invisible God, and since he bears that name with honor in his work on the cross, his name takes priority under the new covenant. Peter exhorts believers who’ve been “insulted for the name of Christ” to “glorify God in that name” (1 Pet. 4:14, 16). Moreover, those who stand with the Lamb in Revelation have the names of the Son and the Father written on their foreheads, marking them for ownership (Rev. 14:1). Believers in Jesus are thus Christ-ians by name and by deed.

How now shall we live in the age of COVID-19? Imes would contend, and I would agree, that we should look to our past, and learn to live as people of the name. Reflecting on the Israelites’ story in the wilderness to confront contemporary challenges seems counterintuitive. But treading old paths is exactly what we need to do, “for whatever was written in former days was written for our instruction, that through endurance and through the encouragement of the Scriptures we might have hope” (Rom. 15:4).

These [Old Testament] lessons are about who we are as God’s people, who he is as our Sovereign Lord, and how he has called us to bear his name in the world.

“God has lessons to teach us that can only be learned in a state of dislocation” (159), perhaps one like a pandemic. These lessons are about who we are as God’s people, who he is as our sovereign Lord, and how he has called us to bear his name in the world.

Do we feel the weight of the name? I’m afraid it’s something we’ve lost. Bearing God’s Name goes a long way in reminding us what’s ultimately required for believers: “Whatever you do, in word or deed, do everything in the name of the Lord Jesus, giving thanks to God the Father through him” (Col. 3:17). I’m grateful for this wonderful book, and I strongly recommend it.

Josh Philpot is the pastor for worship at Founders Baptist Church in Houston. He holds a PhD in Old Testament from The Southern Baptist Theological Seminary.