Most of us never think about our country’s ambassadors. And what little we do know of their work can distort our image of what it means to be Christ’s ambassadors. If our minds envision a sprawling and heavily guarded compound, dignitaries at formal receptions, or untouchable officials with diplomatic immunity, we probably won’t appreciate or understand the biblical metaphor of ambassador.

In his new book, Exiles on Mission: How Christians Can Thrive in a Post-Christian World, Paul Williams explores what it means for Western Christians, who increasingly find themselves as cultural outsiders, to serve as ambassadors in their own communities and workplaces. As someone who’s lived in the UK and North America, with a background in both the secular marketplace and sacred ministry, Williams brings depth and breadth to this discussion. He doesn’t merely identify challenges; he proposes a hopeful and active response of the church for the whole of life. 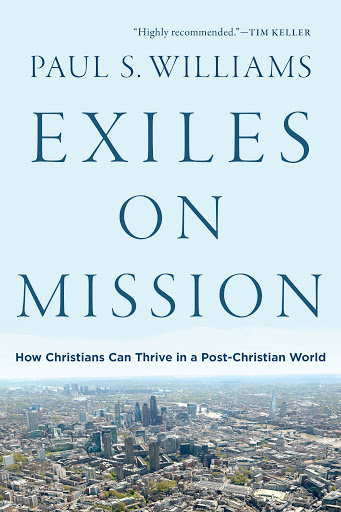 Exiles on Mission: How Christians Can Thrive in a Post-Christian World

Exiles on Mission: How Christians Can Thrive in a Post-Christian World

Paul Williams, CEO of one of the world’s largest and oldest Bible societies, interprets the dissonance Christians often experience while trying to live out their faith in the 21st century. He provides constructive tools to help readers understand culture in myriad contexts and offer a missional response. Williams calls for a truly missional understanding of post-Christendom Christianity whereby local churches are reimagined as embassies of the kingdom of God and Christians serve as ambassadors in all spheres of life and work.

Specifically, the book seeks to recover a missional view of our exile—even when Babylon is our home.

Exiles on Mission opens with a portrait of the cultural landscape of our time, both within the church and also without. Williams documents the rapid changes happening in the West, changes that have brought our societies to the point of being truly “post-Christian.” But he refuses to paint churches as victims. Perhaps most importantly, the book normalizes Christian exile.

For one, the story of the Bible and of all humanity is that of separation from God because of sin. Exile has been our experience ever since the fall. But as we’re reconciled to God through faith in Jesus, Christians in turn often find themselves alienated from the world. As Williams observes, “A heightened experience of exile is a reality of authentic Christian discipleship.” In other words, coming to Christ resolves our greatest problem while creating a new one. “Growing in Christian maturity will likely make us feel more aware of our exile in the world even as we become more aware of our belonging to God” (38).

Coming to Christ resolves our greatest problem while creating a new one.

In the past, Christians in the West may not have sensed their “stranger-ness” because the dominant culture affirmed our faith and made us feel at home. But as Western society becomes post-Christian—even anti-Christian—we’re faced with increasing ridicule and disdain. Since this is a new experience for many, we may not be well-equipped to handle it. But Williams helps us see, in part through biblical examples of faithful exiles, what this can and should look like while also alerting us to potential dangers.

Mind you, these aren’t the dangers we’re prone to notice. As Christians are ostracized or disempowered in the West, the primary threats we’re likely to identify are external. But Williams redirects our attention to internal challenges for the church. These include the danger of retrenchment—struggling to retain ground we’ve held in the past—through Christian engagement in the culture wars (12). There’s also the danger of homesickness and the pursuit of ease. “Comfort plus nostalgia for a half-remembered past” create a real threat to any exile, especially one sent on mission (39). Lastly, there are the dual temptations to assimilate or to withdraw, to capitulate to social pressures or to avoid the culture entirely. Historically, some Christian groups, such as evangelicals or fundamentalists, have tended to lean in one direction or another on this. But Williams suggests that many of us subtly and simultaneously succumb to both, unaware (51).

In short, Williams argues these dangers often prevent the church from a proper missional response at home. Since we’ve bought into the sacred-secular divide, bifurcating faith and work, we’re ill-equipped to see how all of life can be missional. We don’t know how worship on Sundays is meant to transform the everyday. Too many churches have done a poor job helping lay Christians represent Christ in their neighborhoods and especially in the marketplace. Along those lines, Williams also addresses our poor methods of training and the church’s lack of confidence in the Scriptures, which can lead to our social embarrassment about the gospel. Such shame is only sure to increase along with our growing sense of social exclusion.

In this vein, Williams calls the Western church to acknowledge some “hard truths.” Among them, he lists:

But this concerning diagnosis doesn’t leave Williams without hope. In fact, he believes the post-Christian state of the West presents the church with an incredible opportunity to reimagine her mission. Rather than embodying a purely negative or passive role as exiles, as either alien or visitor, he wants us to embrace the biblical metaphor of ambassador. Yes, we’re foreigners, but our exile here is positive and on purpose. The church must rediscover her “sentness” into the world. And he believes, as do I, that the exile we’re now experiencing can helpfully awaken us to our responsibility as Christ’s representatives here at home.

We need to become students of the dominant ‘stories’ of the West, such as secular pluralism, environmentalism, or capitalism.

Just as missionaries enter a new country and are forced to learn the local language and culture, Williams says Christians in the West—facing increasing foreignness—will need to learn a new language. Of course, he isn’t talking about English or Spanish or French. He’s talking about our need to learn how to communicate effectively in our secularizing—even paganizing—society. We need to become students of the dominant “stories” of the West, such as secular pluralism, environmentalism, or capitalism. Williams spends much of the book’s latter half helping us do this in order to better translate the gospel for our neighbors, communicating it in ways they can understand.

From Exile to Ambassador

As Bob Dylan once famously sang, “The times they are a-changin’.” There’s no denying Western society and values have dramatically shifted in our lifetimes. Christians increasingly find themselves on the social and cultural margins. But instead of wringing our hands or clenching our fists—or, as Dylan would have us, lending a hand—Paul Williams calls us to reach out in love to those around us with the countercultural gospel of Christ. He urges us to a positive and proactive approach, not one that is reactive or purely negative.

We can do so, trusting in God’s sovereign goodness. Our exile isn’t an accident of history. Christians also believe we’re not merely passive observers or even victims of change. We’re here sent on a mission. This means, for Williams, we shouldn’t see ourselves primarily as exiles, but as ambassadors of Christ wherever he’s placed us—among our families, communities, and places of business. We’re there to graciously represent Christ and faithfully present his gospel to others. While this role doesn’t come with the guarantee of comfort and security, we should see it for the incredible privilege and responsibility it is.

Ambassadors are exiles on purpose.