How’s this for academic credentials: John C. Lennox holds MA, MMath, and PhD degrees from Cambridge University. Want more? He also has a DSc (Doctor of Science) degree from the Mathematics Institute at the University of Wales. Still more? How about additional MA and DPhil degrees from Oxford University, along with an MA in bioethics from the University of Surrey? More? Lennox was a Humboldt Fellow at the Universities of Würzburg and Freiburg in Germany and has lectured all over North America, Europe, and Australia. He currently holds a professorship in Mathematics at the University of Oxford and is an associate fellow of Oxford’s famous Said Business School. A prolific author, Lennox has published more than 70 scholarly papers and co-authored two research-level texts in mathematics.

And oh yes, don’t forget his new commentary on the book of Daniel.

Ardent Defender of the Faith

A commentary on Daniel? We might be excused for thinking this a misprint, but it’s not. Against the Flow: The Inspiration of Daniel in an Age of Relativism may not be a typical Bible commentary, but it’s a typical book by Lennox: thoughtful, wide-ranging, readable, and full of relevance to the world in which contemporary Christians live.

In addition to his outsized academic credentials, Lennox is an ardent Christian who unapologetically maintains a high view of the authority and trustworthiness of Scripture. Unintimidated by the academic culture he inhabits, he’s also an outspoken critic of today’s well-known atheists and the scientific materialism they espouse. In fact, Lennox has publicly debated some of these atheists around the globe and has taken them on in a series of books: God’s Undertaker: Has Science Buried God? (2009); God and Stephen Hawking (2011); Gunning for God (2011); and Seven Days that Divide the World (2011), a treatment of the early chapters of Genesis. In Against the Flow, Lennox makes no pretense of being a technical Bible scholar, and his treatment shows it. On the other hand, maybe a world-class mathematician is just what you need when it comes to counting down the 70 weeks of Daniel 9!

Faithful Living in Our Own Babylon

Lennox covers the book of Daniel, if not verse-by-verse at least chapter-by-chapter, from the introduction of the four young Hebrews in chapter 1 to the final vision of chapter 12. But this isn’t a discussion calculated to impress professional academics. He opts for an early dating of Daniel but appears to lack the original languages and addresses only superficially the critical issues that an early dating raises. His knowledge of the technical literature on Daniel appears scanty and what sources he does cite are mostly dated. In other words, Lennox isn’t playing by the club’s rules. Members of the professional guild of Old Testament scholars are unlikely to be drawn to this volume.

But then, that guild isn’t Lennox’s target audience. Against the Flow is written for practicing Christians. It’s designed to draw insights from the book of Daniel for how we may live faithfully in our own Babylonian times. For such an audience, the technical and critical issues scarcely register. These readers are convinced of the authority and reliability of the Bible; they’re after a fuller understanding of its wisdom and insight when it comes to living in an increasingly hostile environment. And this is what Lennox delivers. Despite its somewhat misleading subtitle, Against the Flow isn’t an apologetic work in the sense of defending the book of Daniel (and hence the Bible) against its critics; but it is apologetic in the sense of drawing on Daniel’s teaching to help believers understand and live wisely in their secular, materialistic world. 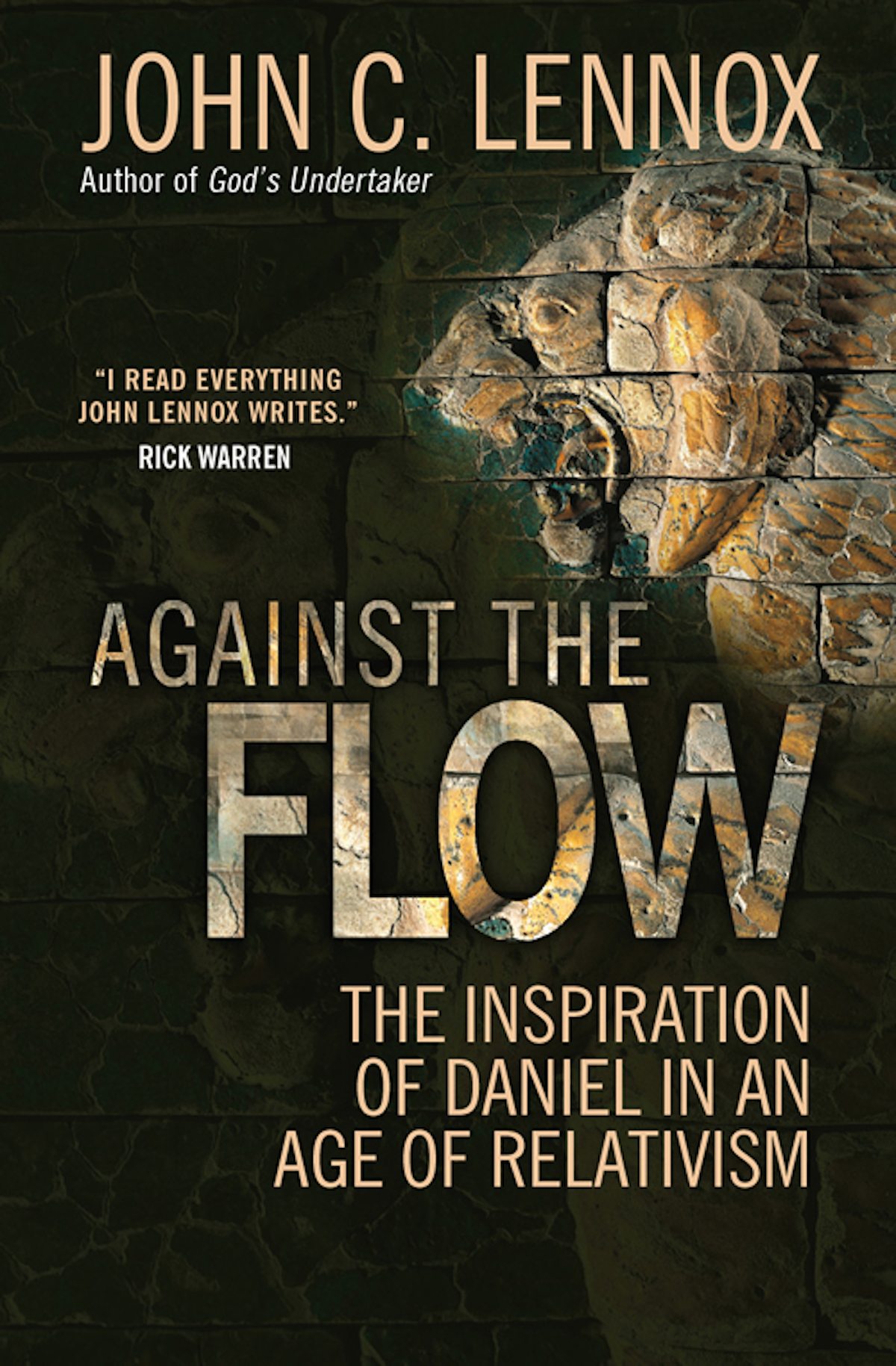 Against the Flow: the Inspiration of Daniel in an Age of Relativism

Against the Flow: the Inspiration of Daniel in an Age of Relativism

The book of Daniel is—if we may use the term—a profoundly worldviewish book. From its early narrative chapters through the various visions, it’s about the contrast between a sovereign God’s (and therefore Daniel’s) view of things, and the human race’s mutinous quest for autonomy. The lessons to be drawn from these chapters are thus as timeless—and just as timely—as Romans 1. These are the lessons Lennox seeks to explore with his readers.

As one who understands our cultural moment—the features of which stand on stilts in his academic environment—Lennox works to show his readers the deep-seated parallels between both a strutting Nebuchadnezzar surveying his empire (“Is not this the great Babylon I have built as the royal residence, by my mighty power and for the glory of my majesty?”) and the Nietzschean techno-arrogance of our own times over against the humble, faithful, God-centered focus of Daniel. Ranging through history, philosophy (especially epistemology), art, and science, Lennox follows repeated rabbit trails into areas of contemporary relevance. These tangents will often prove valuable for preachers looking for illustrative material.

As to the book’s prophetic sections, Lennox treads lightly. He treats the text of Daniel as fully reliable and does not shy away from its predictive elements. Yet he also begs off on some of the more sensational aspects of the prophetic passages dealing with the end times, leaving these to others better equipped to deal with the complexities involved. For Lennox, it’s the underlying theological and philosophical issues that interest him.

I’m not sure what I expected from this volume, but I must testify that it repeatedly surprised me. I’m not a fan of avoiding the technical and critical aspects of biblical study—serious interpreters must engage these issues, even if they don’t burden readers with the details—but I still profited from Against the Flow. It’s the work of a committed Christian with a first-rate mind, wide experience, and a deep commitment to the inscripturated Word of God.

Against the Flow may not be your standard biblical commentary, but its author is definitely a Bible commentator worth reading.

Duane Litfin (PhD, Purdue University; DPhil, Oxford University) is the former seventh president of Wheaton College, serving seventeen years, from 1993 to 2010. He came to Wheaton from Memphis, Tennessee, where he served the First Evangelical Church as senior pastor. Prior to that, he was an associate professor at the Dallas Theological Seminary. He is author of Conceiving the Christian College (Eerdmans, 2004) and Paul’s Theology of Preaching: The Apostle’s Challenge to the Art of Persuasion in Ancient Corinth (IVP Academic, 2015).