This is well and good. Jesus commands cheerful yet (mostly) secret giving (Matt. 6:1–4), and wealthy Christians often deal with a never-ending barrage of invitations to give.

But as someone who has worked with donors, the most meaningful part of my job was listening to their journeys of generosity. A new book, A Disruptive Generosity: Stories of Transforming Cities through Strategic Giving, tells such stories. Though I personally know only one of the “gospel patrons” highlighted, these 40 donor stories—told in 31 devotional-length chapters—felt like reading about friends and family.

Just what is a “gospel patron”? The gospel movements of history had visionary leaders: Paul, Ambrose, Calvin, Tyndale, Whitefield, Spurgeon, and Graham. Behind these leaders were gospel patrons—generous donors who fueled the work. 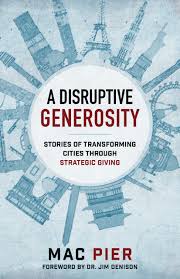 A Disruptive Generosity: Stories of Transforming Cities through Strategic Giving

A Disruptive Generosity: Stories of Transforming Cities through Strategic Giving

Rinehart is, I’m sure, pleased with Pier’s stories from today. He wrote Gospel Patrons “because I believe our generation’s greatest need is for history to be repeated” (19). Pier’s book shows that repetition happening.

One strength of A Disruptive Generosity is the diverse array of people profiled. For example, in 1983 a 28-year-old South African named Graham Power started his first construction company. By 2007, the Power Group had grown to 12 companies with 2,000 employees (119). But this success wasn’t satisfying. As he remembers his life in the late 1990s, Power shares:

I was chasing success. I was pursuing more boats, more game farms, more everything. Yet I could not find inner peace. At the end of 1998 I attended a Christian gathering at the Lord Charles Hotel. I had been invited dozens of times but rarely went.

I ended up going and heard Michael Cassidy, the founder of African Enterprise, and I was challenged by his message. At a second gathering two months later, Peter Pollack spoke. He was one of the great cricket heroes in South Africa. He was an amazing evangelist and invited all of us to pray the sinner’s prayer with him. Following this public commitment, I started to read the Bible daily, and two months later, while I was working through the Bible in my study, I was deeply touched. That evening, February 24, 1999, I committed my life unreservedly to Christ. I was 43 years old. My wife, Lauren, would commit her life to Christ in an Alpha course.

Power’s unreserved commitment to Christ had corporate and kingdom effects.

God began to keep Power awake at night meditating on his Word, specifically Proverbs 11:1 (“The LORD detests dishonest scales”). Power eventually cleaned up the corruption in his company, even contracting 15 other companies that had participated in “tender collusion.” He “announced that he would no longer participate” (120).

The kingdom effects of Power’s leadership and generosity have been wide-reaching. In 2000, Powers was captivated by “the vision of stadiums filled with Christians from all denominations” gathering for prayer and repentance. This led to the Global Day of Prayer (GDOP) gathering in a rugby stadium in Cape Town that year. Fifty thousand tickets were sold. Over 10 years, the GDOP movement spread throughout Africa and beyond. By 2010, “220 nations hosted the gathering (with an estimated 350 million people)” (121).

A second strength of the book is Pier’s global reach. We meet donors living in 12 different countries on six different continents. Adam Walach and his wife, in Europe, are “determined to give away 50 percent of [their] personal income” (60); Darin and Paula Owens in South Africa have seen their “giving increase from 10 percent to 92 percent of [their] income in certain years” (127); Ivan Hinrichs in North Carolina gives away “60 percent of [his] income” (151). The Schrank family in Dallas, Texas, gives to expand Bible literacy among children in Rwanda (ch. 26). The Chen family in Hong Kong gives to, among other things, help settle Ethiopian Jews in Israel (ch. 31).

I commend the book—it’s a treasure trove of stories and practical wisdom for kingdom generosity.

My only criticism is that, with few exceptions, the highlighted causes are evangelistic outreaches, mission projects, or Movement Day gatherings. He doesn’t highlight radical generosity in a local church context, whether toward a building, church-planting campaign, or—and wouldn’t this be every pastor’s dream—a radical commitment of 50 percent to 90 percent of personal income to support the weekly ministry of Word and sacraments. On this point, I was reminded of a story from Rinehart’s Gospel Patrons.

Those that believe must not make haste, but be content to go God’s pace and watch the leadings of his providence as the pillar and the cloud formerly. There is a danger in running from church to church to hear. More profit is obtained under one or two settled ministers. (114)

For the rest of his life, Wilberforce honored the Lord’s Day and promoted regular church attendance as part of his reformation of morals in Britain. As he wrote in his journal, “Blessed be to God for the day of rest and religious occupation wherein earthly things assume their true size.” Gospel renewal for Wilberforce began with worship and the Lord’s Day.

Local church attendance and giving aren’t as exciting as funding a big conference or city transformation, but they’re necessary for faithful living. With those cornerstones in place, these stories of people going above and beyond are exciting and inspirational. May they inspire us all to greater generosity, no matter the size of our budgets.

Dan Olson is the director of Spreading Hope Network, kick-starting new God-centered schools for children of the city. He is also a board member at Hope Academy. He is the co-author of Oh, the Treasures You’ll Know: a Dr. Seuss Parody, and illustrator of The Boy Who Cried Over Everything, The Girl Who Got Out of Bed, and Why Can’t I have a Cupcake? He previously served as director of donor ministries for The Gospel Coalition. He lives in Minneapolis with his wife, Lucy, and their four kids, where they help lead children’s ministry at Cityview Church. You can follow him on twitter.