Okay, that title is homage to James MacDonald, who says congregationalism is from Satan and whom I had the privilege of spending a couple days with at the recent 9marks @ Southeastern Conference.  During the Baptist21 Panel, our moderator stirred up a bit of a hornet’s nest by asking me what I thought about multi-site churches.  Why me? I thought.  Mark Dever is sitting right there.  He loves talking about this stuff.  Aww… man.  Ask me about basketball.

So, after I finished my pity party, I answered my brother’s question, stated something like: “Thabiti, what arguments for multi-site have you found persuasive?”  My articulate response: “Uh, none.”

Okay, this should be the end of the post.  But because I’m in the Miami airport and the people-watching has become a bit weird, I think I’d rather invite you all to my misery and discovery.

At bottom, I think the kind of multi-site churches (realizing there are a few different approaches) that feature one pastor being beamed into several sites around a region—and in some cases around the country or world—is simply idolatry.  It’s certainly cult of personality multiplied and digitized for a consumer audience.  As a brilliant young man remarked to me this morning, “The pastor now becomes the new icon in the midst of the Protestant worship service.”  I think that’s well said.  Video multi-site tends to idolatry, pride, and self-promotion—even where the ambition of spreading the gospel is genuine.  In other words, the ends do not justify the means because some of the ends produced will undoubtedly be odious in God’s sight.

Now I can hear folks pushing back, saying, “There’s cult of personality in small churches with no screens, etc.”  To be sure.  But here’s the difference: In that small church where the pastor is live, his life is visible and the accountability to the congregation far more achievable.  The people get to see his warts and stand half a chance of speaking into his life—even dismissing him if needs dictate.  Such accountability can go terribly wrong.  But it’s nigh unto impossible the farther the pastor gets away from the congregation he serves.  I can’t think of being farther away than being beamed in remotely.  Moreover, the guy standing live before a pulpit stands on biblical ground.  The guy standing on airwaves has chosen a medium without biblical grounds and a medium with greater, more efficient idol-making potential wired into it.  The heart is an idol factory.  The screen cranks that factory up several levels.

Try as one might, I can’t escape the conclusion that those who take the multi-site option are effectively saying, “My preacher is better than your preacher, so we’re gonna brand him and export him to a theater near you.”  That’s crass, I know.  But that’s really the bottom line.  Even during our panel discussion, the main argument for multi-site was “our best preacher should do all the preaching because the other guys are gifted differently or aren’t as good.”  Now that’s disturbing.  And it’s disturbing precisely because it elevates one preacher above all others, and, despite protests to the contrary, it intentionally neglects the development of other preachers who are “good enough.”  Furthermore, doesn’t it confuse a person’s gifting with God’s blessing?  A church is large not because the guy up front has unusual gifts, but because God in His sovereign kindness has decided to add to the number.

Besides, why would you have elders at a multi-site location and not appoint a main preacher or a team of preachers from among them? Why intentionally opt for an absentee pastor?  Why make best the enemy of good?  Why?  Unless there lurks a merchandising and market monopoly spirit driving an expansion of “my church” at the expense of other more biblical and longer term effective methods.  Many of my multi-site brothers are doing a great job at planting churches, and they do have methods for training young men.  But from the distance of the Caribbean at least, it looks and sounds like the reps the young guys receive are not “prime time” reps.  Preachers are made by preaching.  A man who has this gift needs, by God’s design, to use this gift.  If the video multi-site phenomena curtails the use of this gift, then it’s actually retarding the development of gifted men.  It’s ironic, really.  Many multi-site folks are also theological charismatics who argue for the use of all the spiritual gifts.  But the one gift that Paul says should take center place (prophecy, or preaching), they seem to despise in others.

Which brings me to another suspicion.  To the extent one argues “our main guy must do the preaching and be beamed out,” then I think you effectively disavow the “local” in the phrase “local church.”  A very thoughtful pastor pointed out this morning that we surely need a better theology of the unity of the church beyond the local church.  But I think the multi-site, multi-campus strategy that is not speedily and intentionally moving to church planting unravels the local church with an absentee pastor model.  Indeed, “church” becomes a strange moniker for this situation.  A “church” is not just an assembly, it’s an assembly that is also a “family” where the members do all the one anothers and also a “body” where the joints are connected to supply to one another and a “flock” kept in a corral where the shepherds feed, bind, lead, and guide in personal relationship.  Multi-site churches reduce the family, body, and flock to an anonymous assembly.  In that way it trades in the lowest common denominator (assembling) while effectively mimicking “local.” 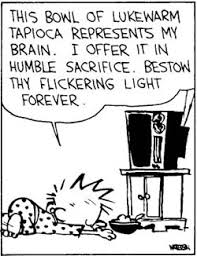 And there’s another form of idolatry going on in some of this strategy.  Again, at breakfast, a rather astute young man pointed this out to me.  For some of the tech heads among us, the very technology is idolatrous.  This young man, a guy who leads the technology ministry at his church and thinks a lot about the theological underpinnings of the church’s use of technology, told me of a technology convention he recently attended.  During the convention, they were given a tour of a well-known mega-church who’ll remain nameless to protect the guilty.  He reflected on the barely muffled “ooohhhss” and “aaahhhss” rising from the techies as they got a glimpse of all the techno wizardry.  He felt the same in his own heart.  In a secular culture that prizes flat screens, blu-ray, and a host of other man toys, we need to think carefully about the use of technology.  For it’s possible to not only make an idol of the pixelated preacher posing as pastor from some major distance, but to also bow at the shrine of technology itself.  Our hearts easily gravitate toward entertainment and celebrity when the preaching event gets broadcast on screen rather than shared in flesh and blood.  The same equations that drive our movie and actor choices now drive our preacher and church choices.

Another observation: Does anyone else hear the shrill voice of pragmatism in the justifications for multi-site churches?  The main retort from many of the proponents is, “It works.”  Now, I’m not afraid of doing things that “work.”  But the claims to “it works” seem to me a bit myopic.  Works in what way?  Well, you begin to hear the statistics and numbers.  We’ve increased attendance or grown membership or conducted x number of baptisms for, example.  But these metrics are blunt.  They’re not refined by numbers leaving other churches, or numbers becoming anonymous in these massive congregations, or numbers who once had a personal relationship with their pastors who now do not.  As a social scientist, I’m not at all impressed with the pragmatic appeal to these gross numbers because, contrary to public opinion, these kinds of numbers do not “tell the story.”  And I think the jury is still out on whether “it works.”  That jury won’t be in with a verdict for another several decades, I’m afraid.  And theologically, the pragmatic appeals to “it works” persuade very little.  Too many other things we’re called to be faithful in doing are simply left undone in this approach.  If that’s true, what exactly is this model “working” at?

Finally, a word about cultural engagement.  Sometimes proponents talk about the strategy’s use as a means to redeem certain aspects of the culture, like the use of technology.  They say, “Hey, do you use microphones in your services?  Then this technology is fine, too.”  They argue that it’s either a full-on I-Max experience or off to Amish country we go.  Here’s what that perspective lacks, in my opinion: Any real deep thought about the structuring elements and assumptions of culture.  In other words, most of the talk about culture and technology lives at the superficial level of cultural artifacts, tools and technologies produced in cultural settings.  Little of the conversation goes to the underlying philosophies and world views underpinning the technology.  Out of what world of thinking and values did this technology arise?  And how does that world of thinking and values affect our use of it?  When we ask and answer those questions, then we’re starting to probe culture at its source.  And only then can we talk credibly about redemption, rejection, and reformation of culture.

Take, for example, the use of video.  Where does that technology come from?  What’s it’s use?  What values prompt its creation?  In terms of video, a quick answer would be it comes from the world of entertainment.  It’s use is fantasy, entertainment, and image-making.  It promotes image and fantasy and make-believe over the glories of reality with all its warts and beauties.  In the adoption of this medium or technological artifact, are we not also unwittingly adopting cultural assumptions that produce the medium, assumptions that are antithetical to the life and worldviews of the Bible and the Christian?  I fear we are.  Perhaps that’s why we’re sometimes agitated in this discussion or nervous about such innovations but can’t quite put our fingers on why we’re bothered.  At the deepest level of cultural being, we feel the antithesis or at least suspect it’s there.

There you have it.  That’s why multi-site churches are from Satan, or a few quick reflections in a crowded airport on a movement in the Lord’s church that we ought to slow down and think about.  And in some cases, reverse course.

Ray Ortlund
Everything just so
The blessing we dread
The peace of Christ
Scotty Smith
Perpetual Invitation, Spirit Libation, Grace Hydration
4 Phrases and An Occupied Throne of Grace
Look for Jesus IN Your Story, Not a Moral to Your Story
Thomas Kidd
Tradition, the Bible, and America’s Debate over Slavery
Charles Spurgeon the Pastor
From ‘Wretched’ to ‘Needy’: Changing a Classic Hymn
Justin Taylor
Three Harms that Come from Redefining Marriage
The Scandal of the American Evangelical Intellectual
A Simple Way to Help One Million Christians in the Global South Get a Copy of Their Own Bible
LOAD MORE
Loading