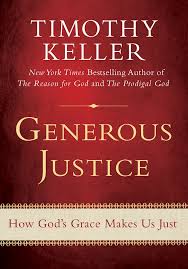 I’m reading through Tim Keller’s new book, Generous Justice: How God’s Grace Makes us Just. Keller treats his subject carefully and with the necessary nuance (be sure to read the footnotes). Just as important, his passion (and God’s passion) for the poor and vulnerable comes through in a contagious way. Both those on fire for “social justice” and those suspicious of it will benefit from Keller’s latest.

Tim was kind enough to take a few moments out of his busy schedule to do an interview with me. My questions are in bold and Tim’s answers in regular type.

I’ll start with the million dollar question, what is justice and what does it mean to do justice?

Doing justice means giving people their due. On the one hand that means restraining and punishing wrongdoers. On the other hand it means giving people what we owe them as beings in the image of God. Nick Wolterstorff says that, as a creature in the image of God, each human being comes into your presence with ‘claim-rights.’ That is, they have the right to not be killed or kidnapped or raped. Of course there is plenty of room for disagreement on the specifics of these things, but that’s my basic definition. Doing justice, then, includes everything from law enforcement to being generous to the poor. (I believe Job 29 and 31 include generosity as part of a just life.)

You explain at the beginning of the book that you are writing for four kinds of people: those excited about doing justice, those suspicious, those who have expanded their mission to include social justice, and those who think religion poisons everything. In a sentence, what do you want to say to each group?

I hope that the 1st group gets a more sustained commitment to doing justice through growing in theological and spiritual maturity.

I hope that the 2nd group becomes aware that what Jonathan Edwards says is true, namely that there is “no command in the Bible laid down in stronger terms…than the command of giving to the poor.”

I hope that the 3rd group would be more patient with warnings to not let a justice emphasis undermine a church’s work of evangelism and making disciples. Careful balances have to be struck. (Whoops—that’s two sentences!)

I hope that the 4th group will be able to recognize that much of their understanding of rights and justice has come from the Bible, and even to critique the church they have to use standards borrowed from Christianity.

What is one of your favorite verses that speaks to either God’s heart for the needy or our call to generous justice?

I don’t have just one. The entire parable of the Good Samaritan has shaped my thinking profoundly.

Why are you so passionate about this issue?

I read the Bible and I’m overwhelmed with the amount of Biblical material that expresses concern for the poor, the widow, the orphan, and the alien. My main gifting is evangelism and I’ve never had extensive experience in a poor community or country. So I reason—if I can see all of this in the Bible, despite the fact that I’m not especially oriented to do so—it must be important to God. I’m passionate about it because I’m passionate to be shaped by the Bible.

What do you do in your own life to pursue generous justice?

At Redeemer, we have an excellent diaconate that works with those in need within our community. In addition, years ago I helped a group of people establish “Hope For New York,” a separate but closely aligned organization, that helps our church members give of their time and money to the needs of the whole city. As I say in the book, many churches who work among the poor establish a 501(c)3—often a ‘community development corporation’—to do much of the direct ministry to people in need. That way the elders of the local church can concentrate on building up the flock. That fits in with Abraham Kuyper’s insight that it is best for much of Christian work in society to happen through voluntary societies and associations, run by lay people. In the end, then, my main personal contribution to justice in New York City has been to establish and lead my church in a way that makes all this possible.

Any cautions you would give to Christians who are eager to transform the world or make the shalom of the city their church’s mission?

I believe that making disciples and doing justice relate (not exactly) but somewhat in the same way that faith and works relate to one another. We would say that faith alone is the basis for salvation, and yet true faith will always result in good works. We must not “load in” works as if they are an equal with faith as a salvation-base, but neither can we “detach” works and say that they are optional for a believer. Similarly, I would say that the first thing I need to tell people when they come to church is “believe in Jesus,” not “do justice.” Why? Because first, believing in Jesus meets a more radical need and second, because if they don’t believe in Jesus they won’t have that gospel-motivation to do justice that I talk about in the book. So there’s a priority there. On the other hand, for a church to not constantly disciple its people to “do justice” would be utterly wrong, because it is an important part of God’s will. I’m calling for an ‘asymmetrical balance’ here. It seems to me that some churches try to “load in” doing justice as if it is equally important as believing in Jesus, but others, in fear of falling into the social gospel, do not preach or disciple their people to do justice at all. Both are wrong. A Biblical church should be highly evangelistic yet known for its commitment to the poor of the city.

I think you’re at least a little familiar with some of things I’ve said and written about social justice and the mission of the church. Any cautions or corrections for me?

I must confess I don’t read your blog religiously. However, I look at it fairly often and I’m always impressed with your thoughtfulness. Here’s one thought. When you say, “the church’s mission is to make disciples, not change the culture,” on one level I’d agree with you, as you can see by my answers under #5 and #6 above. However, you have to disciple people to follow Christ not only inside the church but outside in the world. For example, when a Christian actor asks “what roles can I take as a Christian—and what roles should I turn down?” or when a hedge fund manager asks: “can a Christian do short selling?”—these are discipleship questions. If you disciple people to bring their faith to bear on all of life, you will be equipping them to do justice and also, inevitably, “do culture-making”.  I’m pretty sure you’d agree with me here. I’m only proposing that, when you say, “we must make disciples, not do justice or engage culture” you might give the impression that disciples simply do evangelism, follow-up, and recruiting people into the church. But disciples do more than that.

Jared C. Wilson
My Top 10 Books of 2021
20 Quotes from “Love Me Anyway”
“Love Me Anyway” Releases Today!
Erik Raymond
He Is Not Ashamed
How to Get More Out of Church
Recent Reads: April & May
Justin Taylor
Fact-Checking Randall Balmer’s Urban Legend on the Real Origin of the Religious Right
Chuck Colson: A Life Redeemed
What Mother Teresa Told the Supreme Court: “Your Decision in Roe v. Wade Has Deformed a Great Nation”
Thomas Kidd
Christianity, Warfare, and American National Identity: An Interview with Benjamin Wetzel
Is the Declaration of Independence a Christian Document?
The ‘Jefferson Bible’ and a Founder’s Skepticism
LOAD MORE
Loading