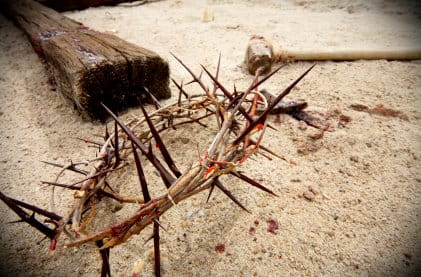 There were a lot of shocking things said and done on Good Friday. This paragraph describes one you may not have considered before.

And as they led him away, they seized one Simon of Cyrene, who was coming in from the country, and laid on him the cross, to carry it behind Jesus. And there followed him a great multitude of people and of women who were mourning and lamenting for him. But turning to them Jesus said, “Daughters of Jerusalem, do not weep for me, but weep for yourselves and for your children. For behold, the days are coming when they will say, ‘Blessed are the barren and the wombs that never bore and the breasts that never nursed!’ Then they will begin to say to the mountains, ‘Fall on us,’ and to the hills, ‘Cover us.’ For if they do these things when the wood is green, what will happen when it is dry?” (Luke 23:26-31).

Jesus could be so unsentimental.

He told those grieving would-be followers to let the dead to go bury their dead (Luke 9:60).

And he told those wondering about the murdered Galileans or about those killed by the tower of Siloam that unless they repented they would likewise perish (Luke 13:1-5).

People today would be outraged by Jesus’ insensitivity. Think about what we see in the paragraph above. There are women following Jesus, weeping and lamenting. For him! And why shouldn’t they? Jesus is a sad sight. He’s been mocked, beaten, scourged, and spat upon. He’s been led away by soldiers to die outside the city. He’s too weak to carry his own beam. He’s about to die on a shameful Roman cross. It is entirely natural that some in the crowd would be moved to tears.

Which is why Jesus’ response is so shocking.

Don’t weep for me.

Come on, Jesus. Can’t you show a little appreciation for the sentiment? At least these women feel sorry for you. At least these woman aren’t spitting upon you. You’d think he’d be grateful for a little moral support. But instead he stops them short: don’t cry for me, daughters of Jerusalem.

There is nothing wrong with their tears, except that they are in the wrong place. Jesus doesn’t stop them from weeping, as if godly people don’t show emotion. He calls them to weep . . . for themselves and for their children.

Jesus finishes his warning with an enigmatic saying: “If they do these things when the wood is green, what will happen when it is dry?” In essence, it means: “If Jesus is not spared the cruelty of the cross, how will the nation of Israel escape divine judgment?” Don’t cry for the Son of Man doing the Father’s will. Cry for those who will face God’s wrath if they do not repent.

That’s why Jesus says what he says to the women in the crowd. His seeming insensitivity is not the absence of love, but the deepest expression of it. He calls them tenderly “daughters of Jerusalem.” He doesn’t want them to waste tears on what cannot and should not be altered, when they should weep and wail over a rebellion that must be surrendered.

Are you crying the right tears on this mournful day?

Hundreds of people died on a cross. Most suffered in physical torment longer than Jesus. There are ten thousand tragedies happening in this world everyday. Right now, as you read this. They deserve our sympathy and compassion. But pity not the Christ when he calls you to penitence instead.

The point of Good Friday is not to feel sorry for Jesus. Jesus does not need our sympathy. The point is to feel sorry for your sin. For if we don’t, we have good reason to weep. There will be no salvation for those who reject God’s appointed Savior.

Make this Good Friday truly good. Turn your mourning into dancing. Turn your sorrow into joy. Weep for your sin and come to Jesus. He offers you his grace and does not need your tears.

Erik Raymond
Do Affections Provide Assurance?
A New Resource on an Old Confession
Why Our Church Cancelled Christmas Eve Service
Justin Taylor
Three Harms that Come from Redefining Marriage
The Scandal of the American Evangelical Intellectual
A Simple Way to Help One Million Christians in the Global South Get a Copy of Their Own Bible
Trevin Wax
Don’t Let Your Wrath Make You a Wraith
Ministry Is Tough: When Self-Care Becomes Self-Absorption
Ivan Provorov and the Pressure to Punish LGBT+ Dissent
Ray Ortlund
Everything just so
The blessing we dread
The peace of Christ
LOAD MORE
Loading