The other day I was reading a chapter for a friend, and he mentioned the material and formal principles of the Reformation. My editorial suggestion was that he define the terms, since not everyone knows what they mean.

Later I realized that I had never stopped to ask who came up with this terminology. I know the concepts go back to Aristotle, but when did they begin to be applied to the heart of the Protestant Reformation?

So here’s a quick overview.

What Is the “Material Principle” of the Reformation?

The material principle of the Reformation is justification by grace alone (sola gratia) through faith alone (sola fide).

It’s hard to improve upon the Westminster Longer Catechism’s definition: for elect believers, God “pardons all their sins, accepts and accounts their persons righteous in his sight; not for any thing wrought in them, or done by them, but only for the perfect obedience and full satisfaction of Christ, by God imputed to them, and received by faith alone” (WLC 70).

What Is the “Formal Principle” of the Reformation?

The formal principle of the Reformation is Scripture alone (sola Scriptura).

In other words: “Scripture is to be understood as the sole source of divine revelation, the only inspired, infallible, final, and authoritative norm of faith and practice.”

Who Came Up with This Language?

The terms have been traced back to the German Lutheran theologian August Twesten (1789–1876), a former student of Frederich Schleirmacher who became his successor at the University of Berlin. He described the principles of the Reformation this way in Vorlesungen über die Dogmatik der evangelisch-lutherischen Kirche (Hamburg: Perthes, 1826).

What Does All of This Have to Do with Aristotle?

The terms material and formal can be a bit confusing, even misleading, in English, because we tend to think that the opposite of formal is informal, and the opposite of material is immaterial.

We need to go back to the Greek philosopher, Aristotle (384–322 BC), the student of Plato and the tutor of Alexander the Great. (In terms of the biblical timeline, Aristotle lived during the intertestamental period, the years of silence between the Old and New Testaments.)

If philosophy “consists of a series of footnotes to Plato” (A.N. Whitehead), then Aristotle is “the primary footnote to Plato” (Peter Kreeft).

If you asked Aristotle why something is the way that it is, he would point out that we can mean four different things when we ask for the cause or reason or explanation (Greek: αἰτία) of a substance.

Let’s take a table as an example. If someone says, “What makes a table?” they could be asking four different types of things:

Though Aristotle didn’t use the following terminology, he did use these concepts: 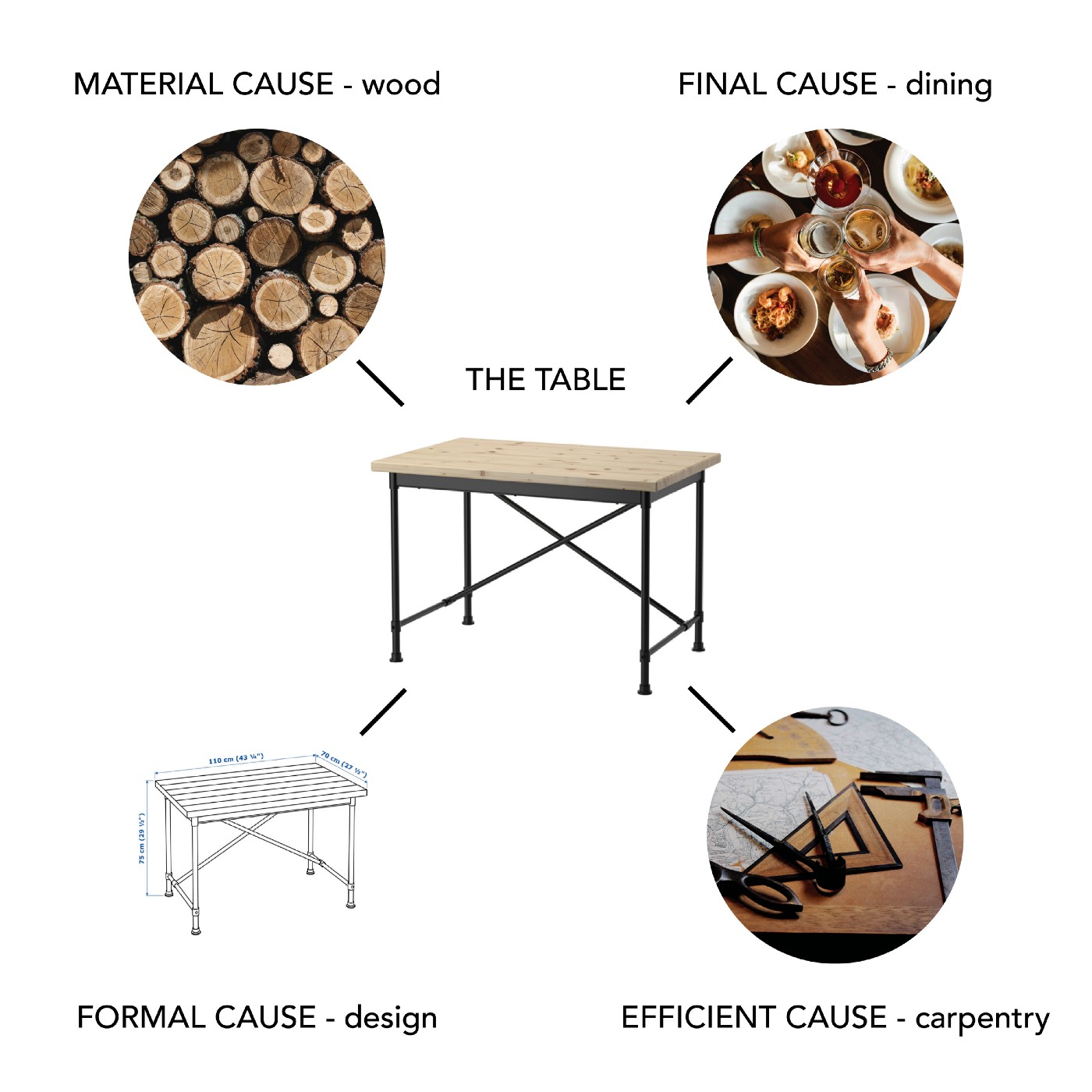 Back to the Reformation

So now we can go back to the Reformation.

The formal cause of the Reformation—the form or pattern or structure or direction that determined the Reformation—is the doctrine of Scripture alone as our final authority in faith and practice. Without Scripture, we would not know that justification is precious and true.

So the next time you hear these terms, you may not remember the name of Twesten, or may not remember how to parse the Aristotelian Four Causes, but do remember that Scripture forms the doctrine, or the material, of the movement that sought to reform the church, returning her to biblical roots, for the glory of God alone.

My Worth Is Not in What I Own – Feat. John Piper, Keith & Kristyn Getty, We Are Messengers

Ray Ortlund
Here, now, us
How to build gospel culture in your church
Do you believe in common grace?
Jared C. Wilson
Reflections on the 10th Anniversary of Gospel Wakefulness
The Mystery Unfolding, Grasping: A Maundy Thursday Reflection
Pastoral Ministry Means Death
Scotty Smith
The True and Greater Switzerland
Quick, Slow, Slower
Why Has God Given Us So Many Bodacious Promises?
Erik Raymond
Why Does Jesus Heal People?
A Tool for Reading the Bible Devotionally
A Second Adam to the Fight and to the Rescue Came
LOAD MORE
Loading