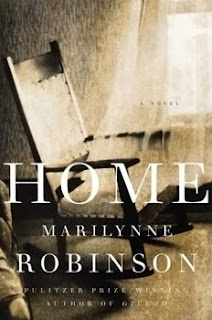 Marilynne Robinson‘s writing is the type that inspires high praise. For example, in a profile in the UK’s The Sunday Times Bryan Appleyard called her “the world’s best writer of prose,” and closed his profile in this way: “Now let me be clear – I’m not saying that you’re actually dead if you haven’t read Marilynne Robinson, but I honestly couldn’t say you’re fully alive.”

Her second novel, Gilead, received the 2005 Pulitzer Prize for Fiction, the 2004 National Book Critics Circle Award for Fiction, and the 2005 Ambassador Book Award. (Summary: “The novel is the fictional autobiography of the Reverend John Ames, an elderly congregationalist pastor in the small, secluded town of Gilead, Iowa who knows that he is dying of a heart condition. At the beginning of the book, the date is established as 1956, and Ames explains that he is writing an account of his life for his 7-year-old son, who will have few memories of him as an adult.”)

Her third novel, Home, was published this year, and it is a finalist for the 2008 National Book Award. (Summary: “The novel chronicles the life of the Boughton family, specifically the father, Reverend Robert Boughton, and Glory and Jack, two of Robert’s adult children who return home to Gilead, Iowa. A companion to Gilead, Home is an independent novel that takes place concurrently.”)

Home was recently reviewed by Books & Culture and by Christianity Today.

Of interest to Calvinists is this line from a profile in the Washington Post:

“These are my favorite books in here,”. . . as she motions toward the bookcase that fills one end of the small space. “See, look: Calvin, Calvin, Calvin.” Sure enough, here are the multivolume “Commentaries” of the great 16th-century Protestant theologian, whom Robinson considers one of the most falsely caricatured figures in history. Here are the two volumes of Calvin’s “Institutes of the Christian Religion,” without which she thinks you can’t understand Herman Melville. Surrounding these are a multitude of other theological and educational works, few less than a century old.

Jared C. Wilson
20 Quotes from “Love Me Anyway”
“Love Me Anyway” Releases Today!
Pride (in the Name of Love)
Melissa Kruger
New Bible Study: Remember Your Joy
Sneak Peek Interview: Ruth Chou Simons
Sneak Peek Interview: Laura Wifler
Trevin Wax
You May Not Be as Far from Other Christians as You Think
Can We Blame Christian Division on Algorithms?
On the Death of My Grandpa Wax: A Tribute
Scotty Smith
Bringing God’s Servants to the Occupied Throne of Grace
Afraid of Getting Old?
Grace, Grace… Not, Karma, Karma
LOAD MORE
Loading