What are the different kinds of variants, and how do they affect the meaning of the texts?

The variants can be categorized into four kinds: 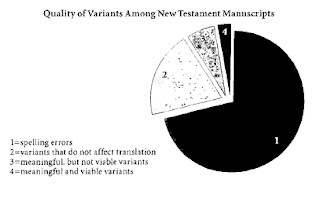 Let me briefly explain each of these.

Spelling and nonsense readings are the vast majority, accounting for at least 75% of all variants. The most common variant is what’s called a movable nu—that’s an ‘n’ at the end of one word before another word that starts with a vowel. We see the same principle in English with the indefinite article: ‘a book,’ ‘an apple.’ These spelling differences are easy for scholars to detect. They really affect nothing.

The second largest group, changes that can’t be translated and synonyms, also do not affect the meaning of the text. Frequently, the word order in the Greek text is changed from manuscript to manuscript. Yet the word order in Greek is very flexible. For the most part, the only difference is one of emphasis, not meaning.

The third group is meaningful variants that are not viable. By ‘viable’ I mean a variant that can make a good case for reflecting the wording of the original text. This, the third largest group, even though it involves meaningful variants, has no credibility. For example, in Luke 6:22, the ESV reads, “Blessed are you when people hate you and when they exclude you and revile you and spurn your name as evil, on account of the Son of Man!” But one manuscript from the 10th/11th century lacks the words “on account of the Son of Man.” That’s a very meaningful variant since it seems to say that a person is blessed when he is persecuted, regardless of his allegiance to Christ. Yet it is only in one manuscript, and a relatively late one at that. It has no chance of reflecting the wording of the original text, since all the other manuscripts are against it, including quite a few that are much earlier.

The smallest category by far is the last category: meaningful and viable variants. These comprise less than 1% of all textual variants. Yet, even here, no cardinal belief is at stake. These variants do affect what a particular passage teaches, and thus what the Bible says in that place, but they do not impact essential beliefs.

Isn’t the process of copying a copy of a copy somewhat akin to the old “telephone game”?

Hardly. In the telephone game the goal is to garble an original utterance so that by the end of the line it doesn’t resemble the original at all. There’s only one line of transmission, it is oral rather than written, and the oral critic (the person who is trying to figure out what the original utterance was) only has the last person in line to interrogate.

When it comes to the text of the NT, there are multiple lines of transmission, and the original documents were almost surely copied several times (which would best explain why they wore out by the end of the second century). Further, the textual critic doesn’t rely on just the last person in the transmissional line, but can interrogate many scribes over the centuries, way back to the second century. And even when the early manuscript testimony is sparse, we have the early church fathers’ testimony as to what the original text said. Finally, the process is not intended to be a parlor game but is intended to duplicate the original text faithfully—and this process doesn’t rely on people hearing a whole utterance whispered only once, but seeing the text and copying it. The telephone game is a far cry from the process of copying manuscripts of the NT.

One of Ehrman’s theses is that orthodox scribes tampered with the text in hundreds of places, resulting in alterations of the essential affirmations of the NT. How do you respond?

Ehrman is quite right that orthodox scribes altered the text in hundreds of places. In fact, it’s probably in the thousands. Chief among them are changes to the gospels to harmonize them in wording with each other.

But to suggest that these alterations change essential affirmations of the NT is going far beyond the evidence. The variants that he produces do not do what he seems to claim. Ever since the 1700s, with Johann Albrecht Bengel who studied the meaningful and viable textual variants, scholars have embraced what is called ‘the orthodoxy of the variants.’ For more than two centuries, most biblical scholars have declared that no essential affirmation has been affected by the variants.

For those who want to explore further, could you give us a reading list of some of the chapters/papers you have written on textual criticism, from the most basic on up?

For starters, I’d recommend Reinventing Jesus: How Contemporary Skeptics Miss the Real Jesus and Mislead Popular Culture. This is a book that I co-authored with Ed Komoszewski and Jim Sawyer. There are five chapters on the text of the New Testament.

Second, Dethroning Jesus: Exposing Popular Culture’s Quest to Unseat the Biblical Christ, co-authored with Darrell Bock. The chapter on the text of the NT is called, “Claim One: The Original New Testament Has Been Corrupted by Copyists so Badly that It Can’t Be Recovered.” This chapter especially deals with Ehrman’s claims.

Third, Interpreting the New Testament Text: Introduction to the Art and Science of Exegesis. This is a book produced primarily by the NT department of Dallas Seminary in honor of Harold Hoehner. The second chapter deals with the text of the NT.

I have also posted several essays at www.bible.org on the King James Bible, various textual problems, what the early fathers said about the text, etc.

Apart from those books and Internet essays, I have written several journal articles that address particular issues in textual criticism, and I am working on a book that will address the whole discipline. It’s still several years away, and I’ve been chipping away at it since 1987.

Tell us a little bit about the Center for the Study of New Testament Manuscripts.

CSNTM is a non-profit institute that I founded in 2002. It has 501(c)3 status (i.e., the IRS recognizes it as a legitimate tax-deductible charity). Our primary task is to take high-resolution digital photographs of all Greek NT manuscripts that we are allowed to photograph. There are 1.3 million pages of such texts, so it’s a daunting task. But with proper funding, we can get the job done by 2020. We have photographed manuscripts in Constantinople (a.k.a. Istanbul); Münster, Germany; Patmos, Greece; and Tirana, Albania, as well as other places. In the process, we have discovered about three dozen NT manuscripts, some of which are pretty significant for helping us understand the transmissional history of the NT and getting back to the original wording in the relatively few places that are still in doubt.

During 2008–09, my sabbatical year, we are hoping to visit eight or nine different sites and take as many as 200,000 photographs. We have posted several thousand images on our website. The next step is to transcribe the texts of all of these manuscripts. Currently, that can only be done manually and it would take an estimated 500,000 man-hours to complete. But some software engineers in Chicago are developing innovative technology for us that will be able to scan in these texts with a very high degree of accuracy. The work that would normally take ten lifetimes will be able to be reduced to one year.

Finally, our objective is to analyze these manuscripts, trace their lineage, and recover to a very high degree of certainty what the original text said. This will obviously have an impact on translations—the Bibles that we have in our hands—in some dramatic ways. You can see a two-minute video clip of our Patmos Expedition of 2007 at several websites, including our own and even on YouTube:

If your readers would like to get the full 21-minute video, all they need to do is write to me at csntm [at] runbox [dot] com and send me their physical address.

If someone wanted to support these endeavors, how would they go about doing so?
As you can imagine, these expeditions are not cheap to do. A four-person team goes to a site and brings very expensive, state-of-the-art camera and computer equipment. The average cost to CSNTM to shoot one page is $6. But in this next season, we believe we can cut that cost in half because our teams will be on-site longer, reducing the cost of airfare, housing, etc. To shoot one average-sized manuscript will cost only $1650. But to digitally preserve the Word of God is well worth it! We are seeking individual donors and foundations for the funds we need to accomplish our mission.

Donations can be sent in one of two ways: either through PayPal at our website, or by check to:

Justin, thanks for doing this interview! And thanks, too, for your ministry on the Internet and in editing and publishing serious Christian books for those who desire to love Christ with all their being.

Dr. Wallace, thank you! Not only for doing this interview, but for the many hours of labor over God’s Word in order to serve the church. We are deeply in your debt!

I would encourage readers to prayerfully consider supporting the work of CSNTM!

Kevin DeYoung
A New (Old) Blog
Life and Books and Everything: American History and the Historian’s Task with Wilfred McClay
Life and Books and Everything: What’s Going Right in the Church?
Erik Raymond
How Can Pastors Prevent Burnout?
He Is Not Ashamed
How to Get More Out of Church
Thomas Kidd
From ‘Wretched’ to ‘Needy’: Changing a Classic Hymn
Christianity, Warfare, and American National Identity: An Interview with Benjamin Wetzel
Is the Declaration of Independence a Christian Document?
Scotty Smith
Let’s Go to Jesus, Not Tarshish
Though Differently from Mary, Jesus Is in Us Too
It’s Not If, But When All Things Will Be Perfect
LOAD MORE
Loading