Each Sunday morning, when I stand behind the pulpit, my eyes are drawn to look out the east windows of our old Congregational Meeting House. As I do, I’m greeted by a sobering sight: an old church building, a relic from another time. But it’s not the building itself that affects me; it’s what it’s become. This structure, formerly a house of worship, is now divided into many luxury condominiums. And it’s not the only one. Several old churches, on our street alone, have closed in the last quarter-century. These buildings were at one time monuments of Christ, testimonies of faith in the Triune God. But now, they’re monuments of another kind, warning of the dangers of doctrinal downgrade while sounding the siren for help.

New England is a spiritual graveyard, but Jesus is the resurrection and the life.

By now, most people know that the Northeast is one of the least churched regions in the US. However, with each year that passes and new study that emerges, New England looks more like a post-Christian, secular Europe than the rest of America. I serve in Watertown, Mass, a town bordering Boston on the Charles River. Our area hovers around a meager 2% evangelical and is one of the least Bible-minded in the country. This is unacceptable. It’s not okay. New England is a spiritual graveyard, but Jesus is the resurrection and the life. 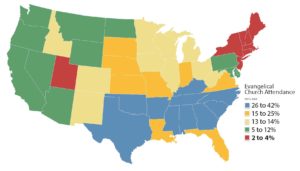 I’m reminded of this as I look to the past, the present, and the future.

The Puritans had a burden to see Christ’s kingdom advance and the New Jerusalem established. They knew this required the salvation of those at the ends of the earth. So it’s no surprise that the official seal of the Massachusetts colony depicted a Native American pleading across the sea, “Come over and help us” (cf. Acts 16:9). As soon as the early settlers came to Massachusetts, they quickly set up meeting houses for the assembly of God’s people. This demonstrates their burden for promoting and preserving the faith they established. We can see this reflected in a plaque at Harvard University, founded in 1636, six years after the settling of Boston.

“After God had carried us safely to New England and we had built our houses, provided necessaries for our livelihood, reared convenient places for God’s worship, and settled the civil government, one of the next things we longed for and looked after was to advance learning and perpetuate it to posterity, dreading to leave an illiterate ministry to the churches when our present ministers shall lie in the dust.”

God blessed the prayers and labors of these early American Christians. Harvard’s College Laws stated that students must “lay Christ on the bottom, as the only foundation of all sound knowledge.” Requirements for students included Hebrew, Aramaic, Greek, Syriac, and Latin to exegete Scripture faithfully. With this foundation, the churches were strengthened. Between 1642 and 1689, 46% of Harvard grads were ministers, and according to a 1696 survey, 62 out of the 71 ministers active in Massachusetts were Harvard graduates.

Moving ahead a couple of centuries, and a few miles down the street from Harvard, in Watertown, a group of new Baptists converts are discussing the gospel around the mill at the river in the 1820s. As their numbers grew, they dreamed about a Baptist church in their town instead of making the trek to neighboring towns for fellowship. So, after securing land from John Coolidge, the ancestor of President Calvin Coolidge, they built a building on Mt. Auburn Street and named it First Baptist Church of Watertown. Looking at the church’s history, it’s remarkable how similar this church is to my own. They gathered together under the priority of the Scriptures and the centrality of the gospel. They practiced church membership and discipline, discipled the church, trained future pastors, and evangelized their town. God blessed the work of these zealous New England Christians. It’s so encouraging to review the past.

If we were somehow able to transport someone from 1636 or 1835 Boston to the present day, I’m sure they would be shocked.

While Harvard University stands at the pinnacle of academic prestige, it also unashamedly barreling forward in a secularist worldview that would make its founders fume. Just recently, the Ivy League school raised eyebrows by hiring an atheist chaplain. Remarking on the hire, the new chaplain says, “We don’t look to a god for answers…We are each other’s answers.”

When I look out the window of our church, I see the belfry from First Baptist Church. And as I do, I’m reminded of the danger of doctrinal downgrade. The gospel that birthed the church was abandoned, and so it died. Now it houses condos. This is replicated multiple times on our street alone and dozens and dozens of times throughout New England.

This is unacceptable. As a native New Englander, I’m deeply burdened for my neighbors. I grew up never hearing the gospel. Imagine that? The statistics show that this is the case for many in our area. Most of our church members are the only Christians their neighbors, coworkers, and friends know.

This is not the final chapter in the story. It can’t be. For people who believe in a powerful gospel and a God who delights to rescue and receive sinners, we cannot throw dirt on the Northeast. There’s work to be done. Yes, New England is a spiritual graveyard; but Jesus is the resurrection and the life.

And so, as we stand in the graveyard preaching the gospel, we’re getting excited seeing the cold ground beginning to move.

Over the last few decades, workers have been trickling in to the area to serve this needy area. And we see fruit. For example, in just the last few months, I’ve witnessed such encouraging scenes in each of the New England states. There are groups of pastors who meet to pray, encourage one another, and partner for the work of ministry. There’s no competition, just like-mindedness, and a deep burden. These are Gospel commandoes that are working to take ground back. Churches are training men for ministry and sending them out to plant, revitalize, and strengthen other churches. Local churches are giving out of their poverty to support these works. I see Simeon Trust workshops bursting at the seams and multiplying because more pastors are working to improve their preaching. I see an influx of people moving from other parts of the country to participate in the work—many of whom aren’t in ministry but realize they can be a blessing to local churches by working and serving here. The beacons of Gondor have been lit, the people are assembling, and the work is moving forward.

I don’t know God’s plans for New England, but I’m hopeful. This hopefulness stems from the heart and mission of God. He loves to write stories that magnify his grace by exalting his Son. But while he often does it in unexpected times and places, he always does it according to his means. God uses the faithful proclamation of his Word in and through the life of his church. The ordinary means of grace is what brings extraordinary results. So as I look around and see faithful pastors doing the fundamentals of blocking and tackling—evangelism and discipleship—I see God’s blessing.

The ordinary means of grace is what brings extraordinary results.

But we need help. There was a day when New England sent missionaries to the other parts of the country. But now, the roles are reversed. Jesus tells us to pray for laborers, “Then he said to his disciples, “The harvest is plentiful, but the laborers are few; therefore pray earnestly to the Lord of the harvest to send out laborers into his harvest” (Matthew 9:37–38).

We need laborers. Pray that God would provide workers for this mission.

Consider coming to New England. If you are in ministry and are thinking about serving in a mission context, consider joining us here. There are rural, suburban, and urban contexts.

If you are not in full-time ministry, consider if you’d be willing to relocate to work in a needy area. Odds are, the job you do in your area could be done here. You may be able to come and help a church struggling to be faithful amid a strong headwind of adversity. Consider partnering to support the mission financially. Couple the fact that we live in one of the most expensive areas in the world and that there aren’t many Christians here, we rely on the support from churches outside our area. Would you consider joining us? If so, I’d love to talk with you.

Yes, New England is a spiritual graveyard; but Jesus Christ is the resurrection and the life. The gospel is powerful. The cold ground is beginning to move. May God be pleased to bring and sustain life!