Send your theological, biblical, and practical ministry questions to [email protected] along with your full name, city, and state. We’ll pass them along to The Gospel Coalition’s Council members and other friends for an answer we can share.

In the Gospel of Mark, it says Jesus was crucified on the “third hour” (Mark 15:25), and the Gospel of John says the crucifixion sentence was on “about the sixth hour” (John 19:14). How was time being reckoned, and is this a contradiction?

We posed this question to Justin Taylor, vice president of the book division at Crossway, blogger at Between Two Worlds, and co-author with Andreas J. Köstenberger of The Final Days of Jesus: The Most Important Week of the Most Important Person Who Ever Lived, due out from Crossway in early 2014.

To answer this, we have to review some basics about how “time” was thought of in the first-century Mediterranean world. If we don’t, it is easy to become anachronistic and to import or insist upon levels of precision that were not in operation in the original context.

How Jews Understood Time in the Day and Night

First, we should bear in mind that in the Western world we are extremely time conscious, keep tracking of time down to the second. But as Johnny V. Miller writes, “Time notations from the time of Christ and before were very inexact, bearing little or no resemblance to the modern concept of punctuality.” Sundials were not in common use in the first century, and there was no unit of time used smaller than the “hour.”

Second, Jews thought of a day—from sunrise to sunset—as represented by “12 hours.” As Jesus asks his disciples rhetorically, “Are there not twelve hours in the day?” (John 11:9).

Third, Jews usually divided the day with three reference points. In Jesus’s parable of the vineyard and the laborers he refers to “the third hour [from sunrise]” “the sixth hour [from sunrise],” and the “ninth hour [from sunrise]” (Matt. 20:1-9). These were general references for mid-morning, mid-day, and mid-afternoon, and these are the only time markers listed in the crucifixion accounts (Matt. 27:45; Mark 15:25, 33; Luke 23:44; John 19:14).

Fourth, we see something analogous with how a first-century Roman or Jew would understand the night. When discussing his impending return, Jesus commands his disciples to stay awake, “for you do not know when the master of the house will come, in the evening, or at midnight, or when the rooster crows, or in the morning” (Mark 13:35). Here we see “night”—from sunset to sunrise—divided into four watches: evening, midnight, rooster-crow, and morning. Kevin Lipp produced for us this helpful visual aid: 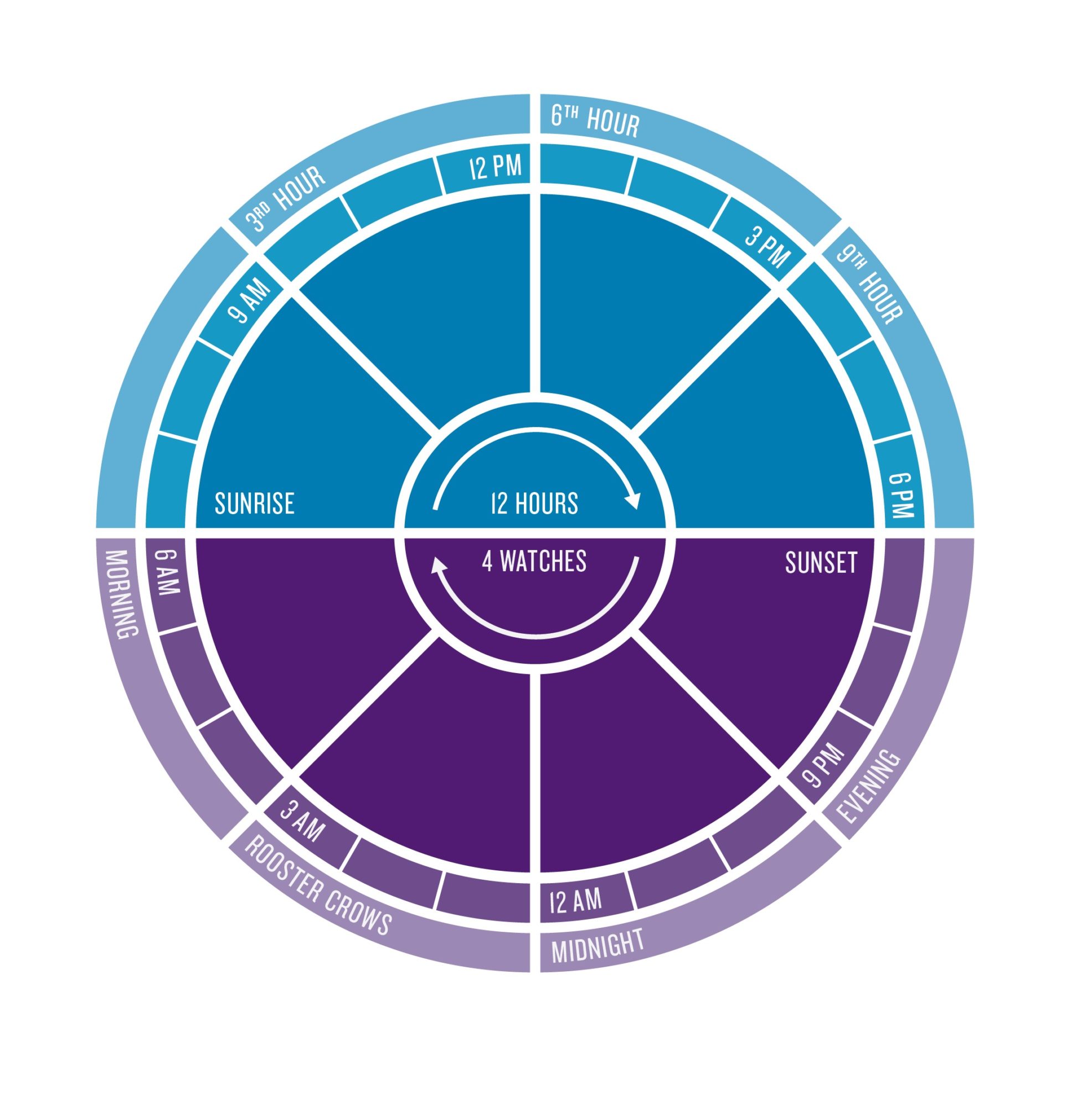 When we come to passage like Mark 15:25, it is probably best to understand the expression “the third hour” not as a precise reference to 9 a.m., but as an approximate reference to midmorning—from 7:30 or 8:00 a.m. until 10 or 10:30 a.m. Likewise, the “sixth hour” could refer to any time from 10:30 a.m. or 11 a.m to 1 p.m. or 1:30 p.m. (Remember that the “hours” were rough approximations of the sun’s position in a quadrant of the sky.) If the sentencing was delivered, say, around 10:30 a.m., and two witnesses were to glance at the sun in the sky, one could round down to the “third hour” and one could round up to “about the sixth hour,” depending on other factors they might want to emphasize (for example, if John wants to highlight in particular the length of the proceedings and that the final verdict concerning the Lamb of God is not far off from the noontime slaughter of lambs for the Sabbath dinner of Passover week). Ultimately, there is no final contradiction, especially given the fact that John gives an approximation (“about”) of something that was not meant to be precise in the first place.