For decades in Western culture (especially since the 1960s), we’ve seen a slow deterioration of trust and a brewing epistemological crisis. We’ve increasingly not known how to know, whose authority to trust, and where we can look for truth.

In recent years, the internet’s toxic buffet of fake news, conspiracy theories, echo chambers, and confirmation bias deepened the crisis. But 2020 took it to another level entirely.

The recently released 2021 Edelman Trust Barometer shows that 2020 saw precipitous trust declines. The fascinating report describes “an epidemic of misinformation and widespread mistrust of societal institutions and leaders around the world” that has been accelerated by COVID-19:

Adding to this is a failing trust ecosystem unable to confront the rampant infodemic, leaving the four institutions—business, government, NGOs, and media—in an environment of information bankruptcy and a mandate to rebuild trust and chart a new path forward.

These phrases are dramatic—“information bankruptcy,” “rampant infodemic”—but most of us believe they’re accurate. We are sickly in an information ecosystem as deadly and contagious as any viral pathogen.

We have not cultivated patterns of information health to boost our immunity. Edelman’s report found that only one-fourth of respondents practice good “information hygiene” (defined as news engagement, avoiding echo chambers, verifying information, and not amplifying unvetted information). Many of us carelessly pass along diseased information (erroneous facts, QAnon theories, logical fallacies) through our unhygienic online habits. Evangelical Christians are some of the worst offenders.

Many of us carelessly pass along diseased information (erroneous facts, QAnon theories, logical fallacies) through our unhygienic online habits.

To be sure, not all the blame can be placed on our own poor information hygiene. We’ve been burned enough times by authorities we thought we could trust—government leaders, journalists, pastors, parents—that our pervasive skepticism is understandable. Further, the internet’s information dynamics are unavoidably oriented around epistemological inertia. It was inevitable that the wild west of the digital age—with its overwhelmingly wide-open spaces, frenzied pace, and bent toward sacrificing truth on the altar of clicks—would accelerate the destabilizing of truth.

But the extent and rapidity of the destabilizing has been alarming. There were 51 years between the TIME covers that declared “Is God Dead?” (1966) and then “Is Truth Dead?” (2017). I expect the gap between “Is Truth Dead?” and whatever comes next (perhaps “Is Knowledge Dead?”) will be much shorter.

Without course correction—if not in the structures of the digital age then at least in our habits of navigating through it—we’re heading for trouble in an ever-worsening crisis of trust. And any crisis of trust is also a crisis of truth, which should worry Christians. We believe we have the truest truth the world needs—the truth that sets free (John 8:32). But in a world where no one trusts truth claims, and where Christians are as vulnerable to spreading lies as anyone, who will listen to what we have to say?

How to Rebuild Trust

The question of how to rebuild trust—and thus provide more fertile ground for seeds of truth—is urgent for everyone, but especially Christians. One area I’ve focused on recently concerns the importance of a properly ordered knowledge diet. If we are to recover more solid epistemological ground, we must be more intentional about where we’re looking and listening. My new book, The Wisdom Pyramid, proposes a simple rubric—inspired by the food pyramid—to help overstimulated souls prioritize more nutritious sources of truth. 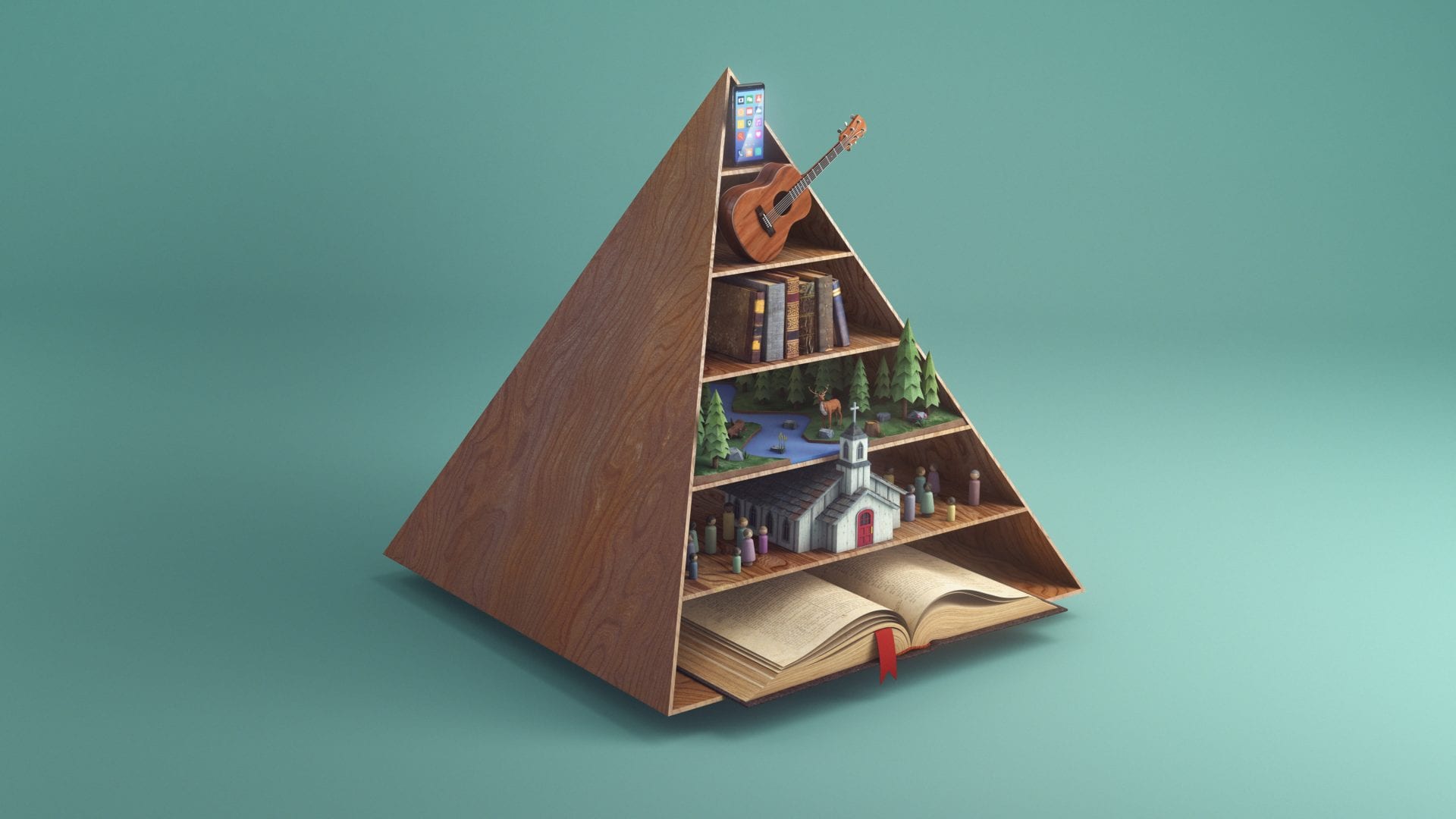 Throughout the book I return to a few general, interconnected themes that can help us triage the trustworthiness of knowledge and information. Here are four:

In general, it’s easier to trust what we can see and experience tangibly as opposed to what’s distant and intangible. A dairy farmer in Wisconsin naturally has more trustworthy knowledge about raising cows than he does about growing bananas. The internet often pulls us everywhere but where we are, giving us the illusion of expertise in—and inviting our opinions about—distant things we can’t sufficiently grasp. Given the choice between listening to the opinion of a local homeless advocate in my city or some opinionated Twitterer who lives thousands of miles away and has never worked with the homeless, I’ll go with the former. At a time when we can be in the business of every place and every problem, however far removed or complicated, localism is good for our wisdom. Instead of listening to anonymous online conspiracy theorists behind unseen avatars, trust the people you can know and be known by; the proximate pastor or parent or friend; the realities you can see for yourself.

In a sped-up world where the #breaking buzz of the moment occupies a large portion of our knowledge diet, slowing down is essential for wisdom. The test of time is a rigorous test. It allows reporting to be verified, facts to be checked, sources to be investigated, reasoning and tone to be considered. Given the choice between a hot take on a complicated subject and a decades-old book, article, or documentary that’s still cited and celebrated, go with the latter. A med student’s health advice will naturally carry less weight than a doctor who’s been practicing for 30 years. An engaged couple’s marital advice should be taken with bigger grains of salt than a couple that’s been faithfully wed for 40 years. As a general rule, trust the older over the newer and the slower over the faster.

A key part of our foolish digital age is how profoundly it isolates us from community—catering in its very algorithmic structure to each individual’s preferred “reality.” This “iWorld” amplifies the existing tendency (at least in Western culture) to sacralize personal autonomy and “follow your heart” wherever it leads. Proverbs 3:5 says, “Lean not on your own understanding,” but contemporary Western culture says the opposite: “Look within yourself for truth.” But this bypasses one of the greatest gifts for our wisdom: community. This is one reason why church occupies the second-most foundational spot in my Wisdom Pyramid. We desperately need the plurality of perspectives and accountability of community to help us through the epistemological chaos.

We desperately need the plurality of perspectives and accountability of community to help us through the epistemological chaos.

When it comes to evaluating the trustworthiness of sources, community should also be a factor. Trust a peer-reviewed article over a self-published one. Trust the scientific consensus of hundreds of experts over the lone wolf writing on Medium. Give more credence to centuries of Christian agreement on a difficult doctrine than to a lone voice “rethinking” Scripture in some novel way. This is not to say communities never err—groupthink, confirmation bias, and homogeneous bubbles are real threats. It’s just that, as a general rule, truth is easier found together than alone.

Wisdom isn’t just a matter of having the most data in your central processor (if it were, AI systems would be the wisest entities in existence). Humans are not brains on sticks. We are embodied creatures in a material world. It’s possible a farmer who never finished high school, yet whose hands are in the dirt daily and who works at the mercy of the weather, could have more wisdom than the “expert” with two doctorates. That’s not to say education is unimportant; it’s just that wisdom is not merely a matter of gaining knowledge. It also involves emotions, tactile senses, and things like appreciating (and making) beauty.

When we’re evaluating whom to listen to, then, we should ask: are they wise? Or are they brilliant cerebrally but lacking in virtue? It’s possible a New Testament scholar who wrote several books on the Sermon on the Mount doesn’t live a life resembling it. A source’s trustworthiness depends in part on factual rigor and avoidance of technical error, yes, but also on demonstrable wisdom across all areas of life. On any given complex topic, if I have the choice between listening to the wise, faithful, humble Christian in my life or the smart but cocky nominal Christian whose life bears little fruit of the Spirit, I’ll always go with the former.

If we’re going to turn the tide of the trust crisis, these four tips are only the beginning. Ultimately our recovery of truth and trust must come from God—the source and standard of all wisdom. Wisdom and worship, after all, go hand in hand. If God is wisdom incarnate, then our presence with him in relationship is the most vital ingredient for our wisdom. We must orient our whole lives (mind, body, soul) around God, not only knowing about him but enjoying being with him, and praying to him often for the illumination we need to perceive truth in an increasingly foggy world.