How often does your teen use social media? What social media platforms are most popular among the students in your student ministry?

Probably a lot, and probably YouTube and TikTok, according to a new survey from Pew Research Center.

We know why this matters for teens—we can see how they’re being discipled through their relationship with social media.

But it also matters for the rest of us, because how teens use social media often drives how everyone uses social media. At nearly every turn in the young life of the social internet, teenagers have led the way. Whether or not a new app catches on often depends on the adoption rate among teen social media users. The kinds of content that lead to cultural phenomena off-line are often created and promoted by teen social media users.

In order to best love and lead the teens in our lives—whether they’re our children, in our student ministries, or otherwise in our care—we’d be wise to know how they use social media and other forms of technology. Let’s look at a handful of stats that provide a clearer picture of how these forms of media may be shaping teenagers.

1. 95 percent of teens use YouTube, and 19 percent use it ‘almost constantly.’

And YouTube is dominant across the board, regardless of the users’ age, gender, race, socioeconomic status, or otherwise, Pew found. Almost all teens use YouTube, nearly one in five “almost constantly.” 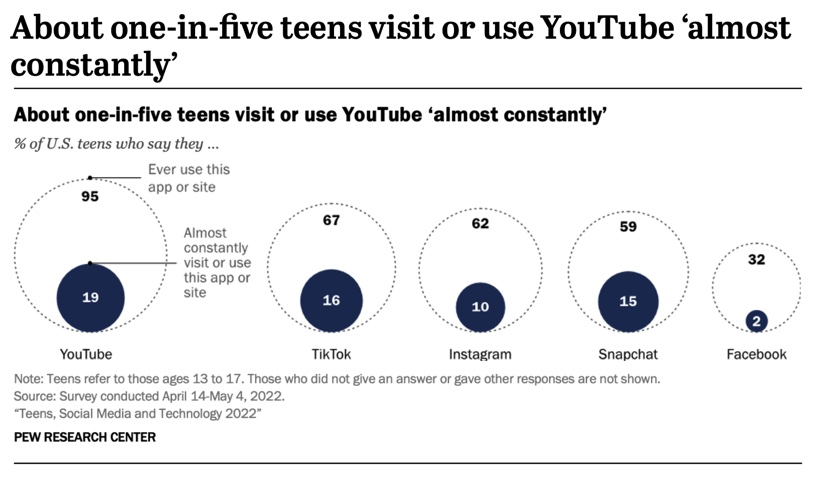 It’s not hyperbolic to say that YouTube is the most influential—and, therefore, the most important—website in the world. It’s used by almost every single teen in the country, and as of Pew’s latest research of U.S. adults in 2021, it’s also used by 81 percent of all adults. YouTube is king of the social media world, but it isn’t just that. It’s also the second largest search engine in the world, surpassed only by Google, its sister company in the Alphabet family.

This is perhaps the most shocking statistic in the whole study, aside from the stat that shows 95 percent of U.S. teenagers have a smartphone (up from 73 percent in 2014–15). No one should be surprised at TikTok’s popularity—it drives culture more than any other social media app right now—but you might be surprised at how quickly it has overtaken the attention share of two social media mainstays among teenagers: Instagram and Snapchat. When Pew did this survey six years ago, TikTok hadn’t even been created yet. 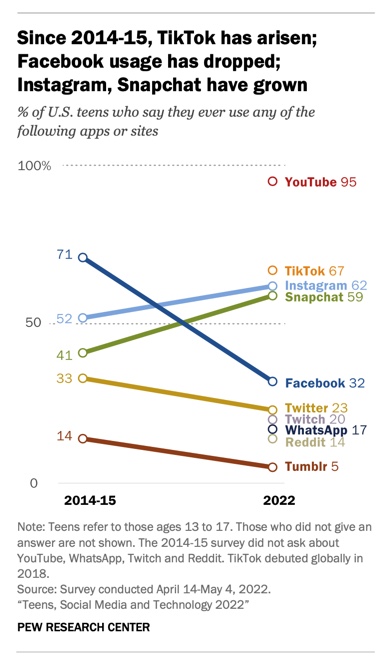 While both Instagram and Snapchat’s usage among teens has jumped significantly since 2014–15 (10 percent and 18 percent respectively), it’s notable that TikTok is making its debut ahead of those two platforms.

Of course, there are plenty of reasons to be concerned about TikTok, from its addictive algorithm to its relationship with the Chinese government. But its appeal is undeniable. As someone whose favorite social media app of all time is Vine, I found TikTok fills the short-form video void that was left when Twitter shuttered Vine in January 2017. Also worth noting is that when Pew conducted their last survey on teens and social media in 2014–15, Vine was only corralling the interest of 24 percent of U.S. teenagers, which pales in comparison to TikTok’s 67 percent.

3. 46 percent of teens say they use the internet ‘almost constantly.’

It seems as if teenagers are always online. Of course, some of this time may be related to a work or school obligation of some sort. However, other studies have shown that teens average more than seven hours a day on screen entertainment; about 60 percent spend more than four hours a day on social media alone.

Because they’re always online, teenagers are “always in the hallway,” Derek Thompson writes in his book Hit Makers. The social internet is the modern version of a school hallway and lunchroom—a stage that’s ever-present and unrelenting in its demands for performance under the hot lights of social pressures.

Teens, then, are enslaved to performance. It is no wonder students struggle with anxiety and depression in greater numbers than ever.

4. 36 percent of teens say they spend ‘too much’ time on social media. 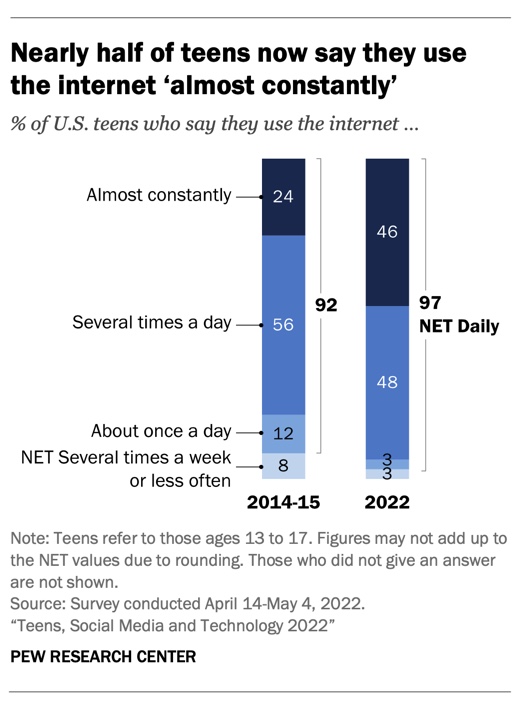 This was the least surprising statistic to me, but it’s nonetheless notable. The behemoth of Silicon Valley whose “move fast and break things” mantra has led it to be more like a bull in a china shop is hemorrhaging teenage users. Of course, Facebook knows this more intimately than anyone. It’s why they purchased Instagram out of the bargain bin for a billion dollars in 2012 (it was estimated to be worth $100 billion in 2018) and why they tried to buy Snapchat for $3 billion in 2013 (Snapchat rejected the offer and is now worth around $17 billion).

Meta, the holding company of Facebook, Instagram, and WhatsApp, knows it’s losing young users from its flagship platform, Facebook. And it risks the same with Instagram as it repeatedly tweaks the app to compete with TikTok, at the cost of frustrating its users.

Social media is likely the greatest force of discipleship among the teens in your home and in your church. Parents and church leaders understandably feel overwhelmed when they consider the prospect of discipling in competition with the omnipresent internet and its carnival of fancies. What can you do, then, as a parent or ministry leader?

First, you have to be willing to change your own habits. The average social media user spends about two and a half hours per day on social media—that’s not just teenagers, that’s everyone. If you and I are going to help the teenagers in our lives have a more healthy relationship with social media, we need to be willing to evaluate our own. The Pew research clearly shows that social media is a teen issue, but it’s not only a teen and student ministry issue. We ought to check our own lives before we instruct the teens in our care.

If you and I are going to help the teenagers in our lives have a more healthy relationship with social media, we need to be willing to evaluate our own.

Second, you can’t go wrong with emphasizing the importance of living life off-line. A significant percentage of teens recognize their unhealthy relationship with social media, or at the very least see how the internet is affecting their peers. How we do this is important—celebrating the richness of off-line life is more likely to resound with teens than chastising them for spending so much time online. Discipling teenagers who are always online doesn’t require us to force them off-line, but it does require us to show them that the best of life is away from their feeds and apart from their screens.

Finally, we must model what it means to be the embodied church. The teenagers in your home or church may not yet be believers. If we want to show them a better way—the best way—to find community and meaning, we need to model what it looks like to do that in the embodied church and the God we worship. Practically, this looks like involving teenagers in all aspects of church life, from personal Bible reading to the local church worship gathering to community groups and more.

Attempting to disciple a teenager in the age of the internet can feel like trying to put out a raging house fire with a pocket-sized squirt gun. But by God’s grace, we get to rely on living water and wells of grace that never run dry.

Chris Martin is a content marketing editor at Moody Publishers and a social media, marketing, and communications consultant. He writes regularly in his Substack newsletter, Terms of Service, and author of Terms of Service: The Real Cost of Social Media (B&H, 2022). Chris lives outside Nashville with his wife, Susie, their daughter, Magnolia, and their dog, Rizzo.